Discovery of a Roman fresco of the 1st century A.D. in London 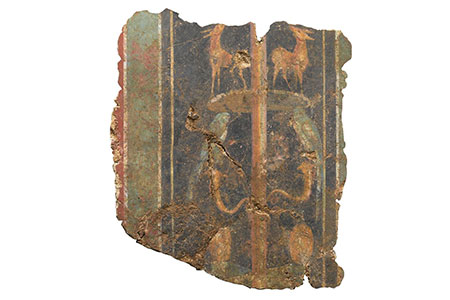 A colorful fresco of the late 1st century A.D. (Almost 2,000 years), that was probably part of the decoration of a Roman villa, it has just been found in the financial district of London, England.

The Museum of London Archaeology (MOLA), stressed that this is "one of the oldest preserved frescoes of Roman Britain”, which dates just some time after Londinium (the actual London) was founded.

This is a piece composed of various fragments, found six meters deep and in position with front face down, allowing a better preservation of the same. This fresco "was hand painted by a skilled artist with natural ground pigments, except an area of red in the twisted vine that was highlighted with cinnabar, an expensive pigment mercury sulfide mined in Spain", particularize a MOLA press release.

The fresco remained in excellent condition after it was torn down the wall that belonged around 100 AD , when the second basilica forum was built: "the main civic center of the city and the largest Roman building ever built at north of Alpes", described the press release.

The discovery was made in the 21 Lime Street, next to the insurance market Lloyd 's of London, in the area where the principal financial center of London is concentrated.