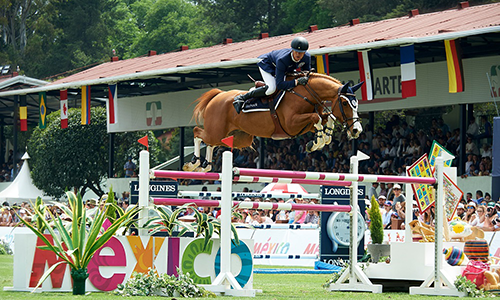 The Longines Global Champions Tour Mexico 2018 will take place within the framework of the celebrations of the 50th Anniversary of the 1968 Olympic Games in Mexico, at Campo Marte, from March 22 to 25.

For the third year in a row, the so-called "Formula 1 of Horse Riding" will be held at Campo Militar Marte with the participation of the Mixed Fund for Tourist Promotion. Jan Tops—founder and president of the Global Champions Tour—said he is very happy to start in Mexico City the first of 17 dates around the world, and stressed that Mexico City will be the only date in the series to take place in Latin America. In turn, the president of the Council of Longines Mexico, Francisco Pasquel, asserted that they expect attendance of approximately 35 thousand fans over the weekend, and described this show as a family event, where, in addition to the equestrian competition, several activities will be carried out as well.

The program will involve 25 of the best riders in the world with 19 competing teams; more than 15 trials will be carried out during the weekend with a prize of one million 300,000 thousand dollars, according to what was reported in a press conference by the organizers. Among the riders who will represent Mexico are Nicolás Pizarro, Patricio Pasquel, Federico Fernández, Andrés Azcárraga and Antonio Chedraui.