With the simplicity and grace that has distinguished the Italians, in almost any form of expression possible, artistic or esthetically speaking, Falcon presents us its model 86, a piece from which the shipyard feels proud of, just like father like son.

As all the vessels they produce, each one has characteristics that although they indicate their linage, they differentiate one from another, even if it is with subtle details or with really tangible matters. Undoubtedly it is a worth representative of Falcon and with that pleasant weight on shoulders it will never disappoint us.

As an additional compliment to the compromise and quality of the shipyard, this yacht counts with the RINA certification in many of the materials and processes of construction, such as the fuel tanks, to quote an example. Everything under the rules of the Registro Italiano Navale (RINA) Italian Naval Registration, which is one of the most ancient certification agencies of the planet. 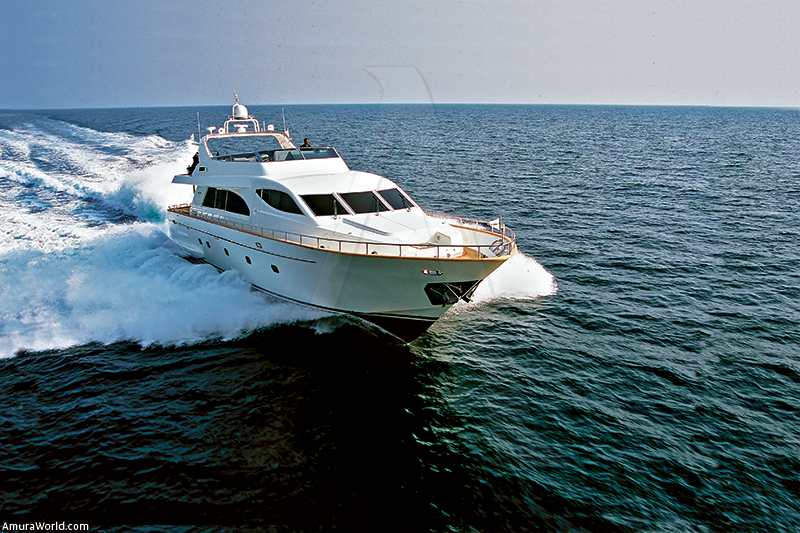 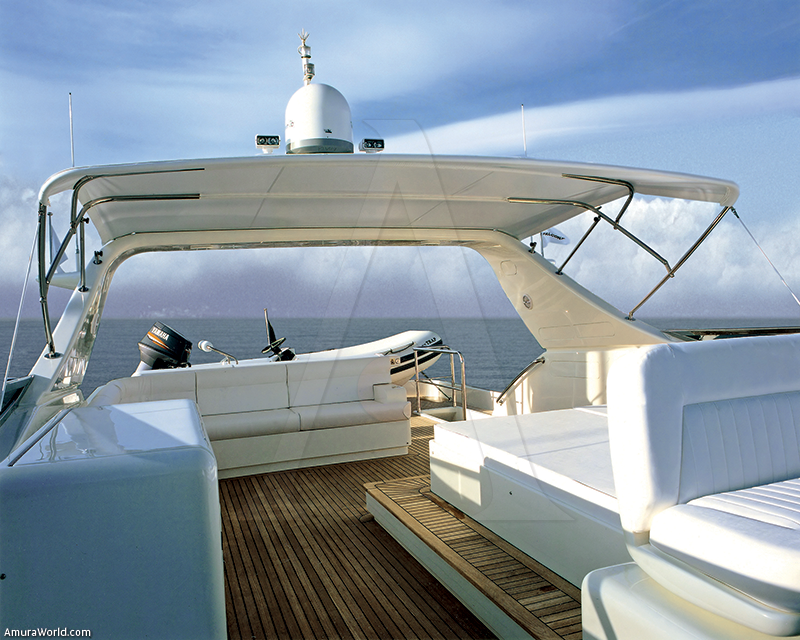 To start our interior tour, in the lower deck are located the cabins. Towards the stern is the owner’s cabin, which makes the most of the total of the beam to keep the amplitude that the host deserves. Details as the closet doors with automatic lightning when they are opened, 26” LCD screen, DVD player and recorder, as well as a safety deposit box.

Complementing what has been mentioned before, there is a really roomy dressing room as well as a very spacious bathroom that has – as to be expected – finishes of the most top quality and of an excellent taste.

Towards the bow there are located two identical cabins at the sides, with twin beds, closet and bathroom. In both cases, with music system and there could be optionally installed video equipment and screens. The finishes of the woods, as well as in the boat at large, may be in cherry, mahogany or oak tree.

Near the bow we find the VIP cabin, which has a queen bed oriented towards the stern, two closets at each side of the bed and with an independent bathroom; a 20” LCD screen with DVD player and recorder, besides the stereo. It also has a safety deposit box and telephone access.

Completely in the bow and with an access from the main deck there are located the crew’s cabins, one (the port one) with bunk beds; the other is the one for the captain, with a twin bed, both with an independent bathroom and the two of them have a stereo. 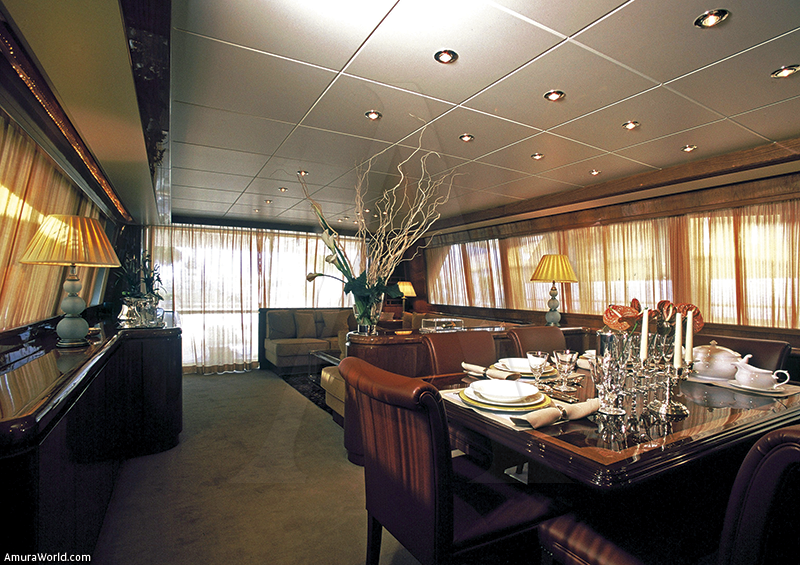 In the main deck, at the exterior, there is a place to tan ourselves just in the bow. Just next to it, towards the stern, the command bridge has a lounge and a bathroom.

Continuing with our trip from bow to stern, there is a hall at starboard and to port.

The kitchen is equipped with two refrigerators which compressors are located in the machines room, detail which give us less auditory contamination, vibration and give us more space in the kitchen. It also counts with an electric oven, and an electric stove with four burners, granite cover and floor– client’s choice– as well as a dishwasher and a retractile working table, which leaves in evidence once again that Falcon puts a lot of attention to the details, discrete, but that they generate great comfort. 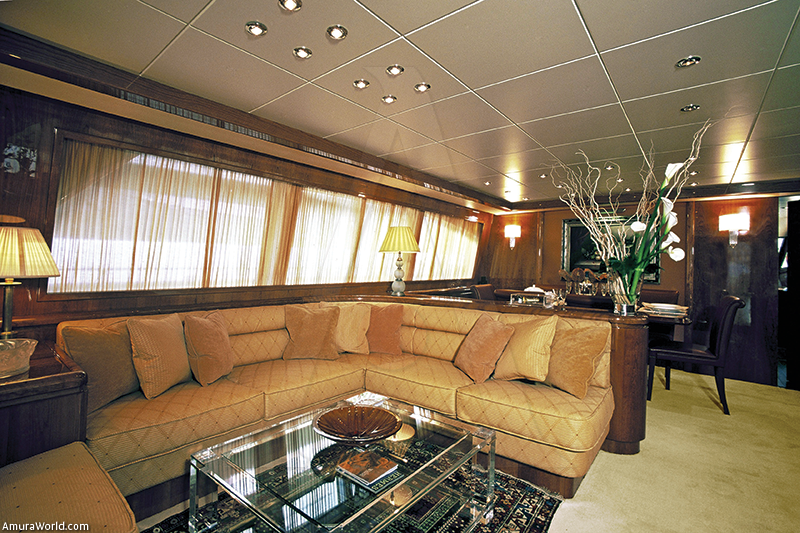 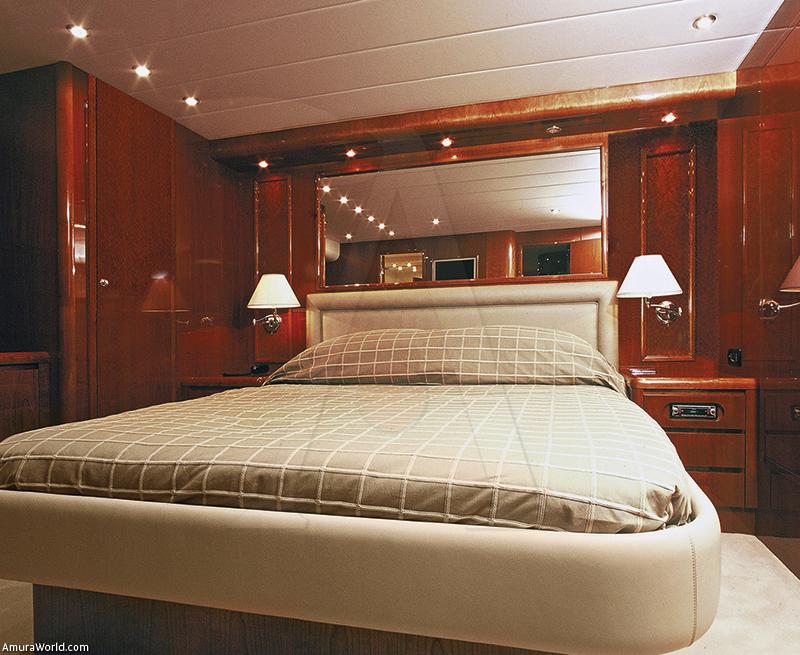 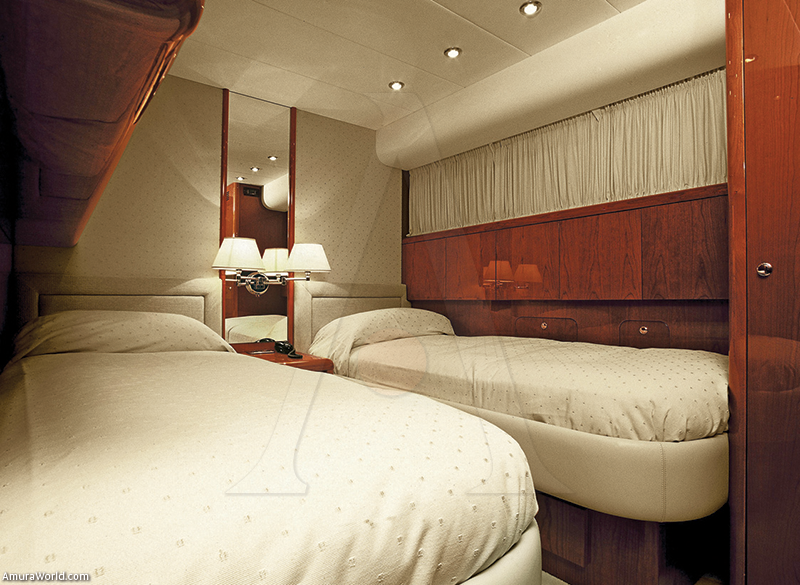 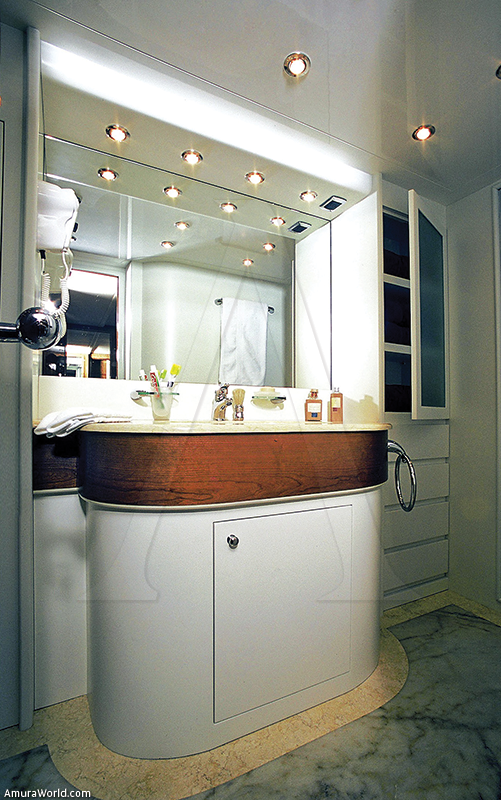 Then we arrive to the dining room, with place for eight people comfortably seated. It has a special space for the cutlery and dinner services. At the end of this deck there is a living room, which has a “U” shaped sofa at port oriented towards starboard, and at the center, a wooden table.

In starboard there is located the entertainment center that has, among other things, a 42” plasma screen, DVD player and recorder, besides a stereo with speakers in the main lounge, in the command bridge and in the drawbridge. Here there is also an icemaker as well as a sliding door which lead us to exit to the exterior of the stern, where there are the stairs that lead us to the drawbridge.

In the drawbridge there is an exterior command post as well as armchairs to enjoy the open air and an area for tanning ourselves, besides an armchair that is protected with a hard roof. In the part more towards the stern of this deck the space is designed to house the dinghy.

As conclusion, this yacht has many details that make it a pride member of the Falcon family and that at the same time make it unique and perfectly distinguishable among its brothers. 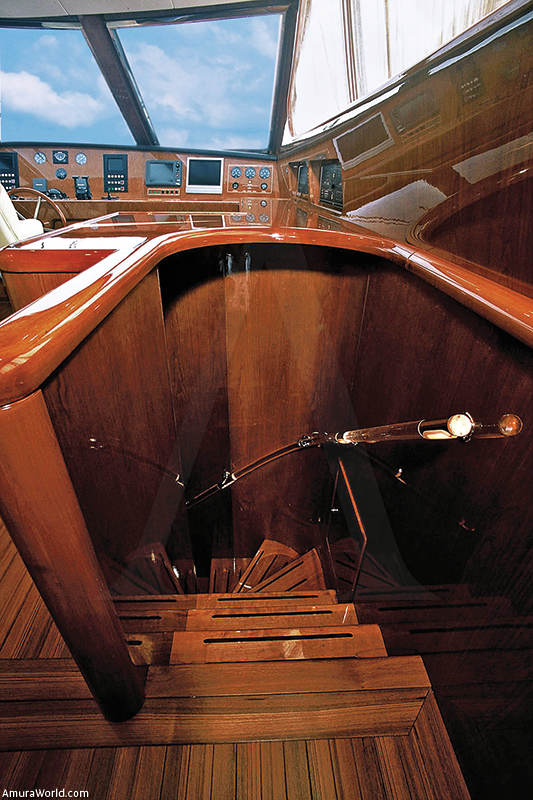 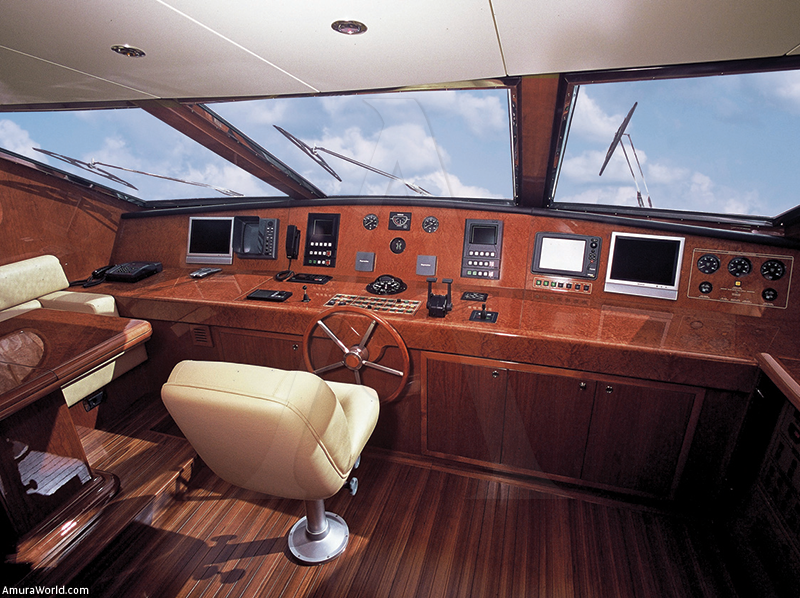 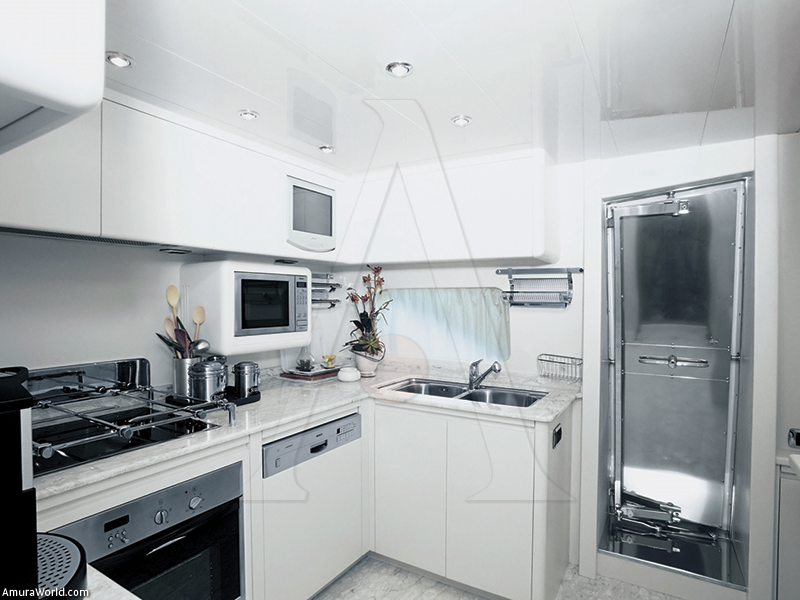