The Sanlorenzo SD 92 is part of a new line of yachts of semi displacement of from the prestigious Italian house Sanlorenzo, in which an attractive elegant aspect is combined with a great capacity for navigation, allowing it to move nearly 2 thousand nautical miles with a speed of 12 knots (with a full tank). This way innovation and tradition come together in a harmonious balance.

The SD2 was designed by Francesco Paszkowski, who has collaborated with Sanlorenzo in the past and has even won rewards for his work in yacht manufacture. The lines of this boat are influenced by the transatlantic ships of the thirties and forties, but this elegant classic appearance forms a balance with the technology of modern navigation.

The semi displacement hull was configured to obtain better results in terms of speed and dynamic stability. This way, it reaches a constant 17 knot top speed. 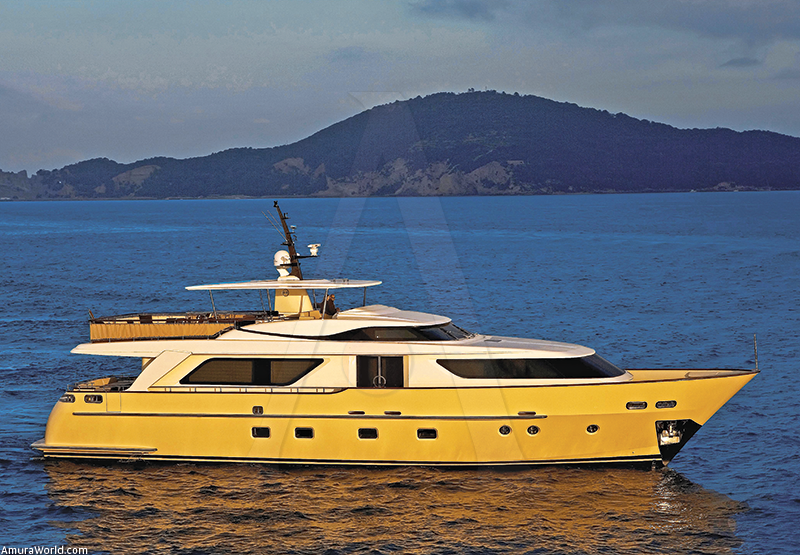 The most predominant color in the SD 9Zs hull is a cream tone that reminds us of the seventies shipments, which embodies a perfect balance with the mahogany and teak of the decks. The roofs that cover the flybridge are of a cream color that evokes the navettas from the beginning of the 20th century. In the upper deck, the window to the control room continues in a thin line towards the stern, accentuating its modem aspect.

The interiors of the SD 92 carry on the same classic line; the light colors come to life through the furniture based on rose and cherry wood, which were a trend in the first decade of the 20th century, receiving a special varnishing and waxing treatment. The illumination in the ship is based, like any of its aspects; in the proprietors preferences who can decide which will be the lights placement according to what needs to be highlighted, which could be the predominant white in the bedrooms or the delicate carpeting.

The main hall of the SD 92 comes with two individual seats, designed by the thirties artist Josef Hoffmann, apart from two black leather seats made from the designers original projects. Illumination is generated by a light panel in the roof. Between the living room and the proprietors bedroom, there's a wide kitchen that's imposingly white.

The access to the different sections of the yacht is made easier thanks to each of their distribution. Besides the kitchen there are two sliding doors that allow access to the runways. To access the lower deck, where the main cabin and guests bedrooms are located, you descend through marble stairs which handles are made skillfully made by rosewood. 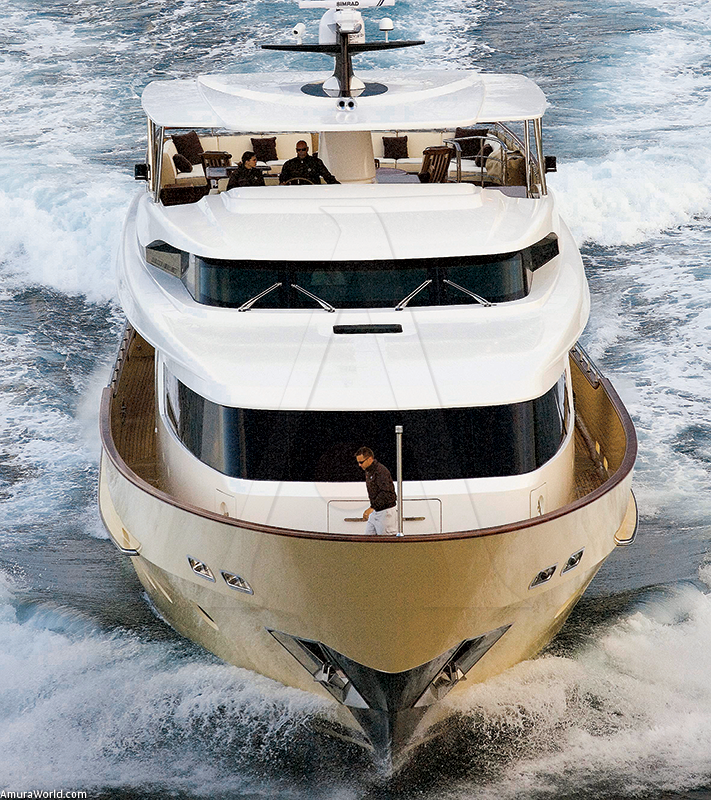 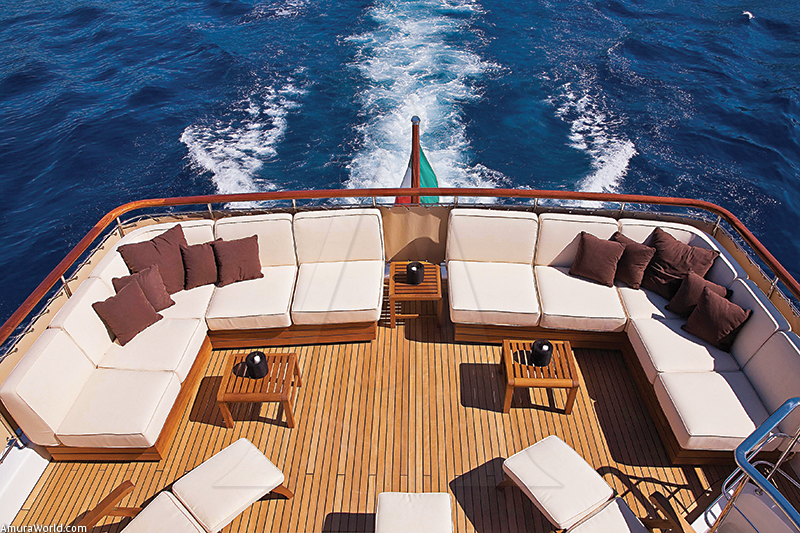 p>The command cabins board comes in dark wood, which brings out the latest generation navigation instruments. In addition it is equipped with seating for three, so the passengers may enjoy the view during the trip. The continuous flybridge has a surface of 50 square feet, decorated with a predominant cream tapestry. The carbon fiber roof allows the solarium to be enjoyed under any weather or circumstance.

Access to the bow section is through an electric gate, where there's a 27 square feet garage with the capacity to hold a jet-ski and an emergency boat. This part of the SD 92 is positioned in a way that will never obstruct the view to the ocean from the flybridge. In this end of the ship, inside the lower deck, is the crews' cabin.

In its most technical aspect, the SD 92 doesn't stay behind, it reaches its 17 knots of speed with two D2842 engines, which life span has been extended to reduce its 1500 hp to 1200 hp without compromising its performance. The fuel tank has a capacity for 16 thousand liters which allows it a reach of 2 thousand nautical miles or 40 hours of continuous navigation. 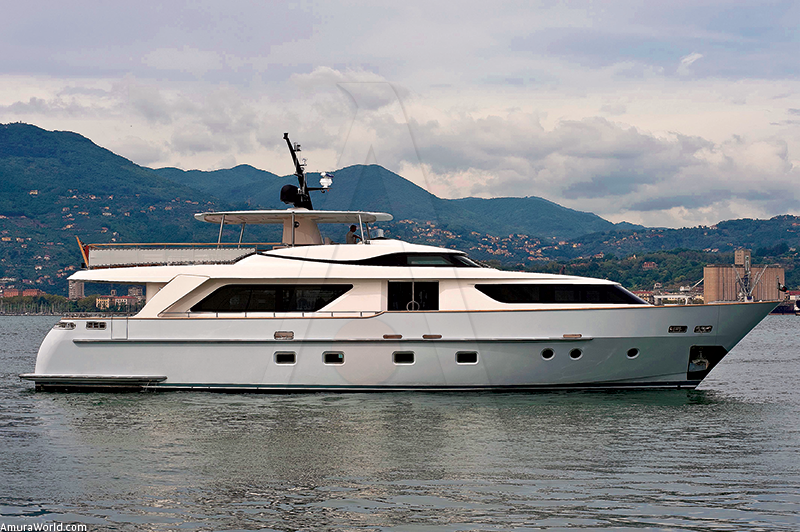 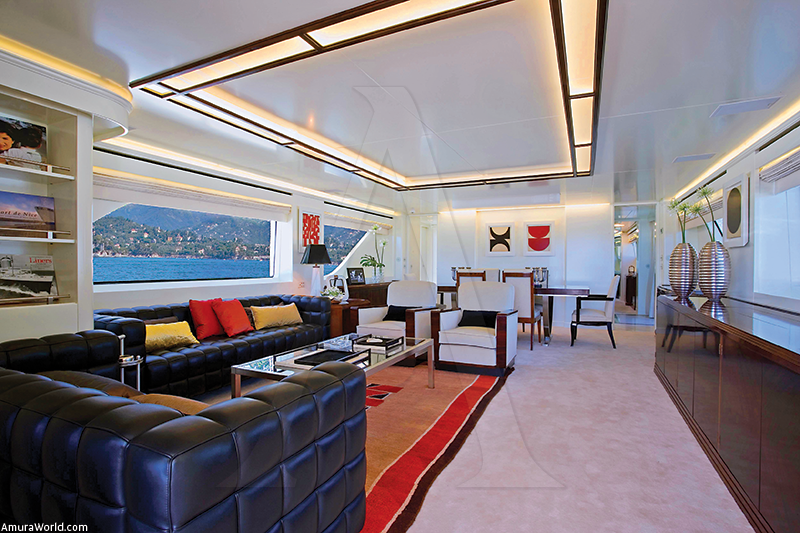 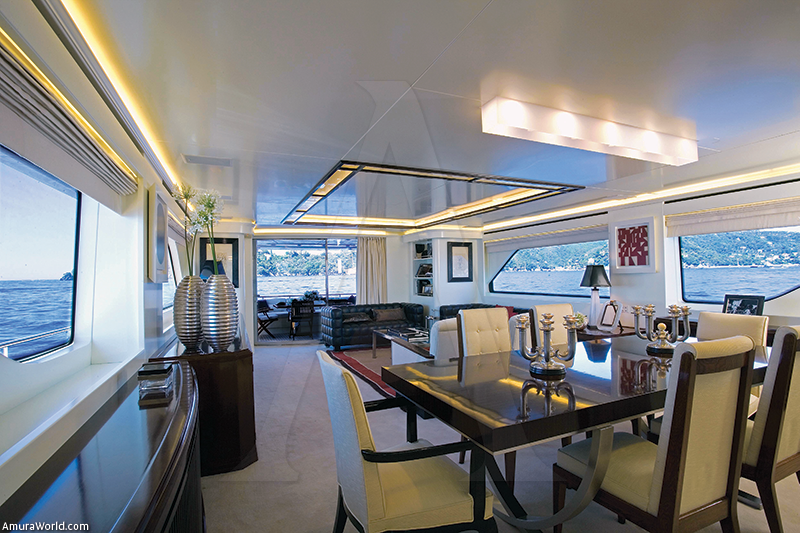