The Black Corsair of the Future… Today

You do not have to be an expert to appreciate the futuristic lines that are part of this powerful |yacht. In addition to comfort, its shape  has the essential equirements to adapt to its  three “small" propellers; each is nothing less than  a 5,600 HP turbine monster, in addition to two  “auxiliary” 370 HP engines (just in case there is not  enough power). 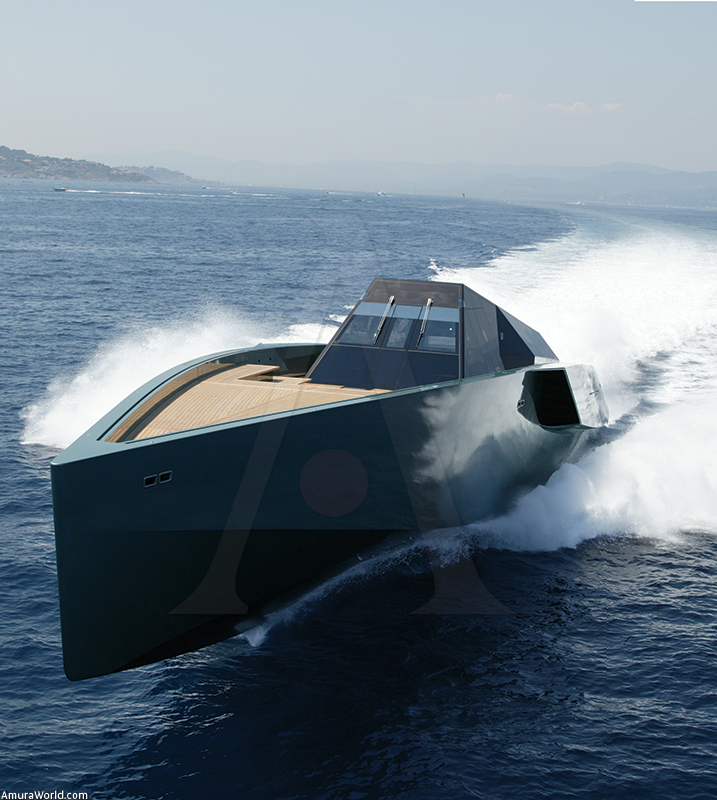 The exterior of this powerful boat looks more  like a new generation fighter jet than a yacht, and  its angled, clean shapes and minimalist style (both  in the interior and exterior) are living proof of what  can be achieved by joining technology, design,  ergonomics, power and art. The exterior is made of  new generation materials: the superstructure is  made of carbon fiber and laminated glass and the  hull is constructed with a variety of materials like  carbon fiber, balsa wood and fiberglass.

The equipment, as almost everything else on  this ship, is outstanding. It features six LCD televisions, three of which have 15” screens and three  with 20” screens. Both Wally and Lazzarini Pickering  Architects, who outdid themselves in every aspect  and turned this “toy” into a state-of-the-art ship,  down to the very last detail, designed the interior  and exterior. 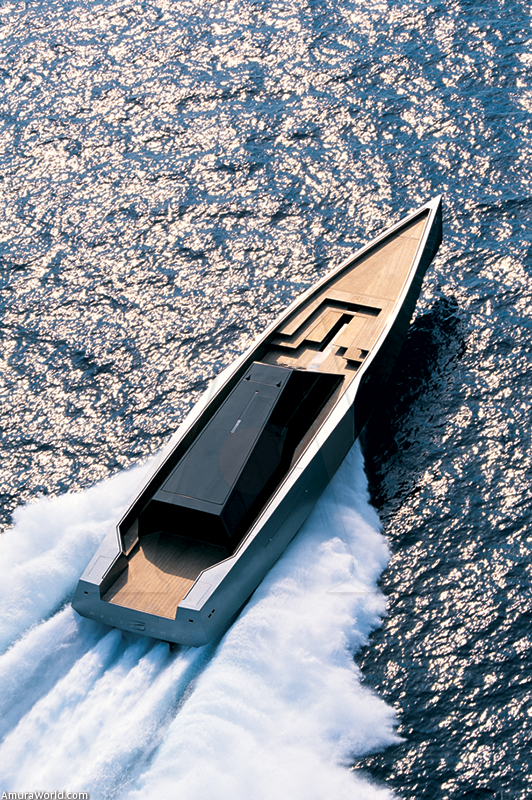 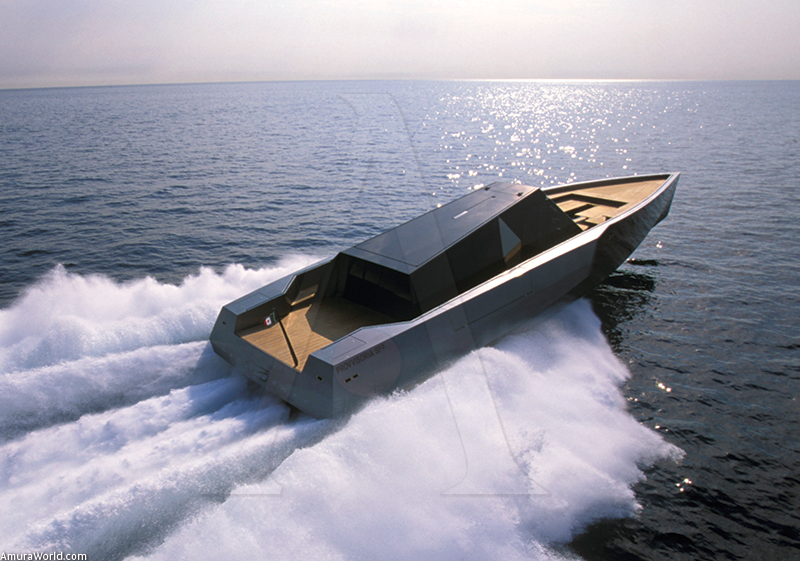 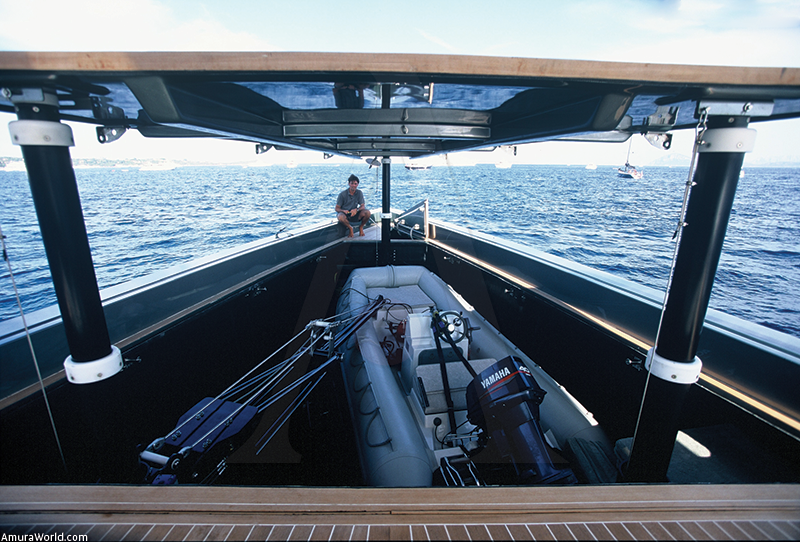 Another example of these first-rate features is  the kitchen, which, far from being just another  area, is equipped with the finest appliances (almost all made by Miele). The dining room is completely  minimalist and the table is made up of two identical carbon fiber sections which, when not in use,  adapt to the cabinets located to port and starboard  of the saloon, converting it into an open area.  Additionally, the chairs can be fixed to the floor.

The staterooms are incredibly spacious and  the simple angled shapes, together with the lighttoned woods and cream-colored fabrics, provide a  feeling of freedom. There is also an abundance of  light thanks to the glass superstructure.

The guest area accommodates six people in  three staterooms: the owner’s as well as two with  queen size beds, complete bathroom and more  than enough room for luggage and clothing. There  is also enough space for three cabins for the crew,  one has its own bathroom and the remaining two  share one. The common area for the crew has an  ample kitchen and a 15” LCD TV. 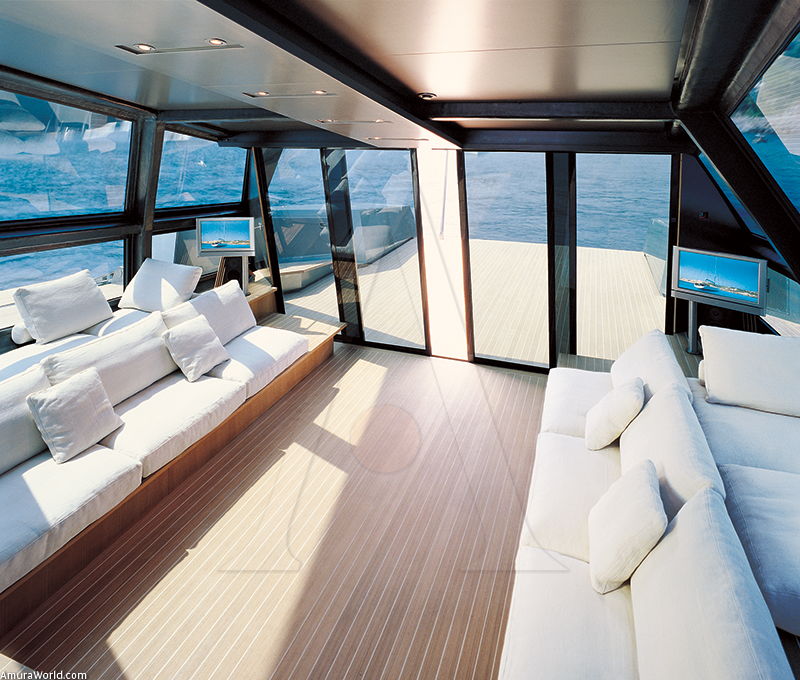 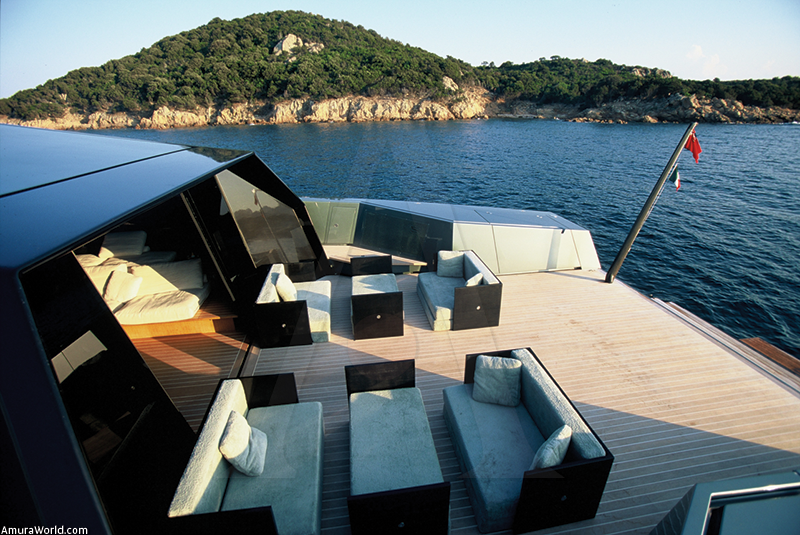 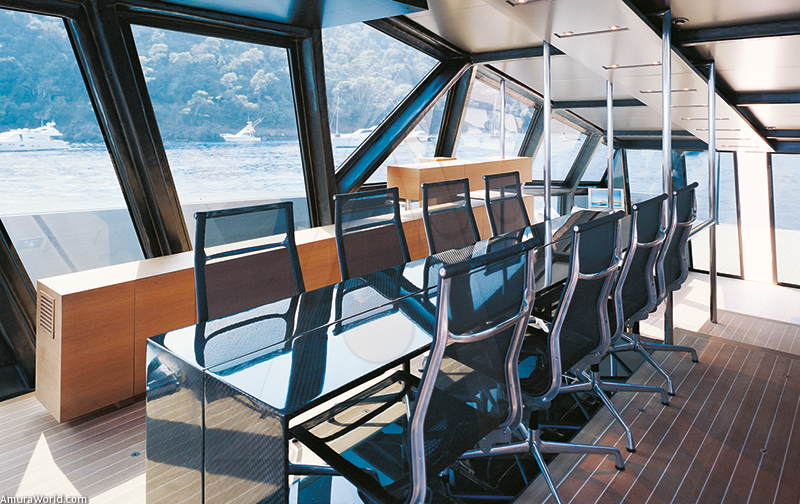 In addition to the boat’s forceful lines, another curious fact that further promotes its resemblance to a fighter jet is its paint. Provided by  Dupont, it is sensitive to light and to the surroundings and changes constantly, giving the  ship the appearance of a chameleon.

Another thing that shows how nothing was  left to chance is that the yacht’s aerodynamics  were tested in Ferrari’s wind tunnel facilities  in Maranello. Italy. The sea and cars, two of  mankind's greatest passions, were joined here by  destiny. 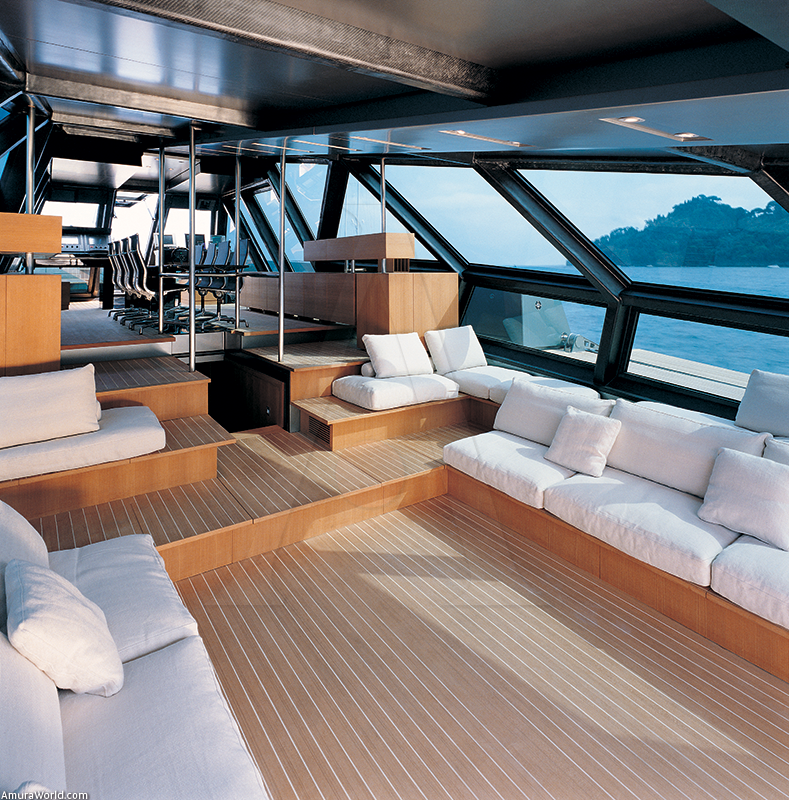 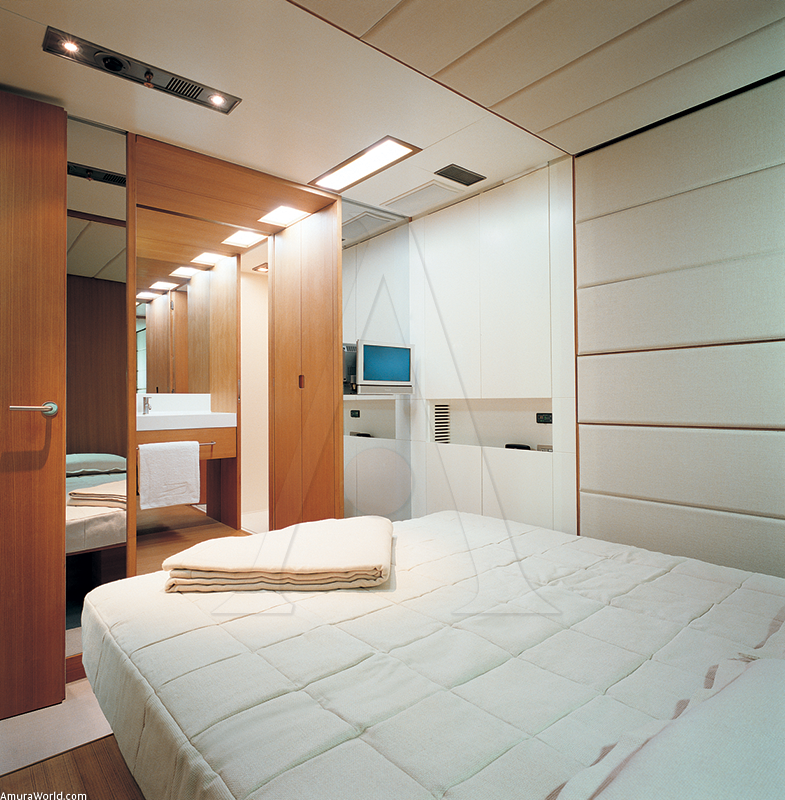 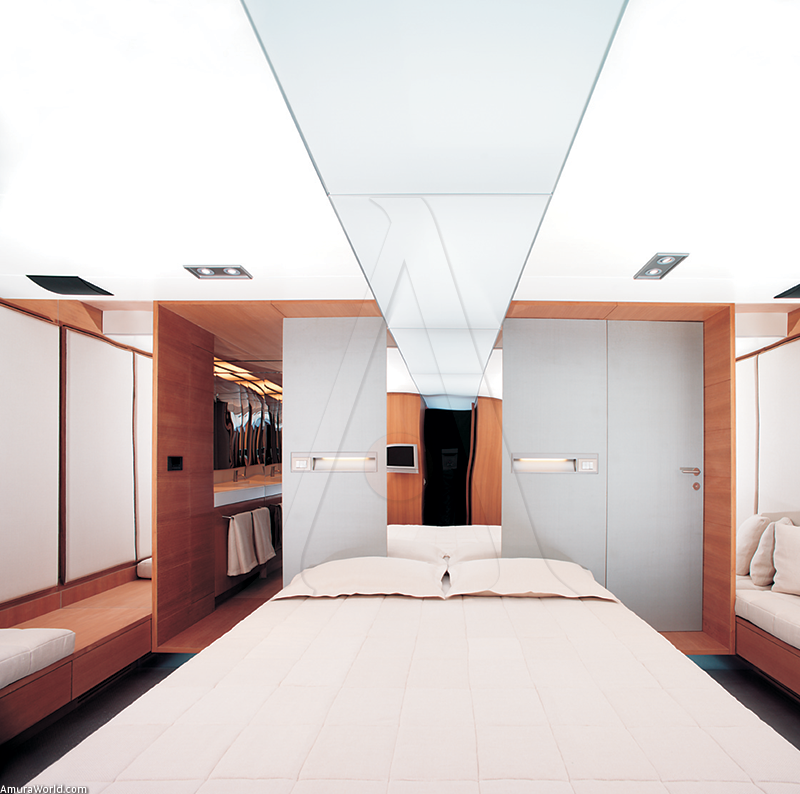 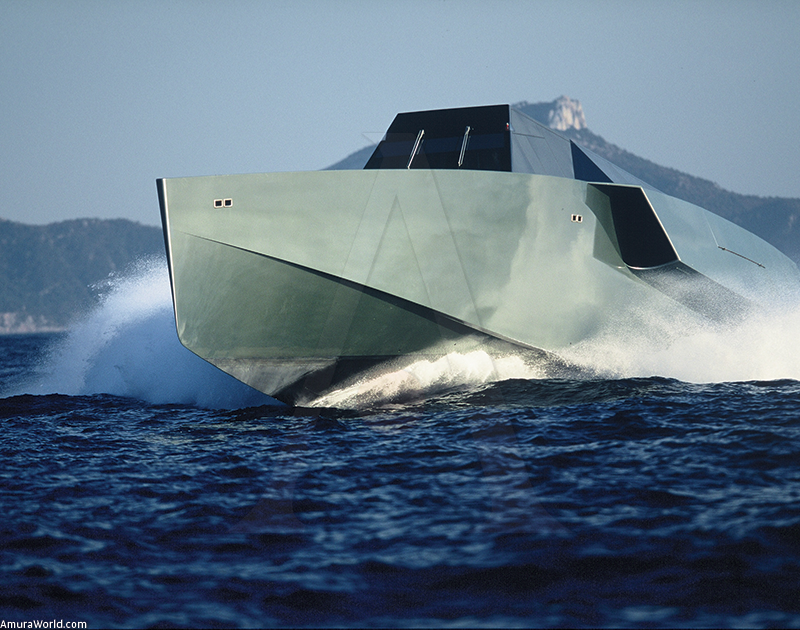