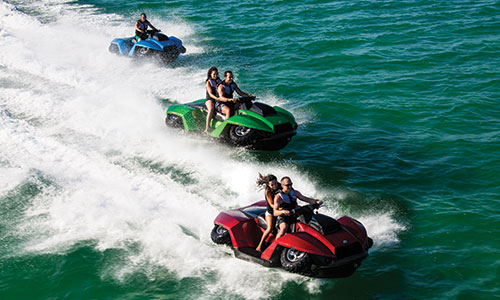 Some years ago, the Gibbs Quadski was regarded as one of the best amphibian vehicles of its type. Now, by the introduction of Quadski XL its concept has been enhanced and refreshed, offering its passangers the greatest experience ever on sea and land, at a breathtaking speed.

Designed for two people, it has ample room added to its predecessor’s: extra 11.8 inches between axes, almost 12 inches longer and greater storage capability; being its riding smoother and nicer for its driver, being more comfortable on land and water due to its improved stability. 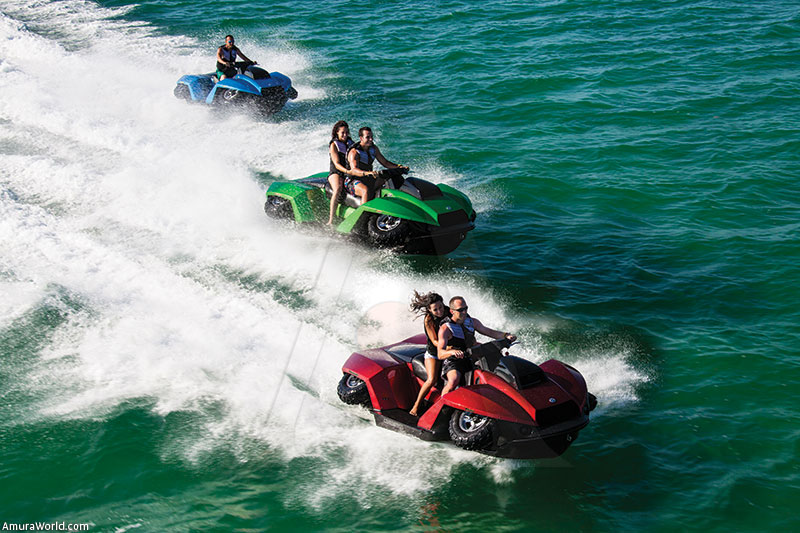 Its design is perfectly adapted to an appealing aesthetics and to the need of space, and the driving demanded by the contrasting terrains for which it is destined. Under the storage seat, it has room enough to keep a second helmet and a safety gear, the same as a glove compartment.

Fun and freedom are multiplied by offering a higher sense of security and an increased number of vehicle maneuvering possibilities.

In addition to the above, it has fixed helms integrated into the hulls which improve its steadiness, besides being helpful for the maritime handling. In the same tenor, it possesses bigger air intakes which extend and improve the engine cooling and, as a consequence, its performance; together with its frontal bumper system to overcome any difficult terrain situation it encounters. Other features are its light, durable and composite hulls, the jet water drive patented technology integrating water cooling through four cylinders, regarded as the lightest plant of energy in its segment; the dry sump lubrication and the electronic fuel injection. 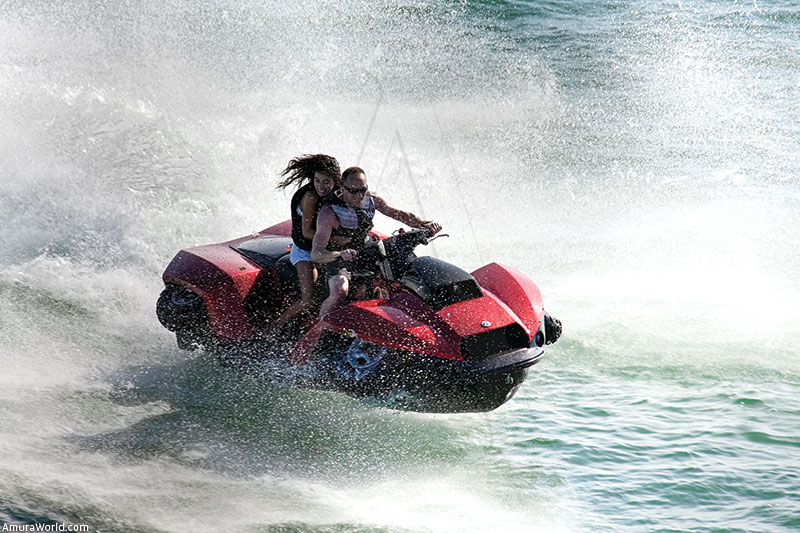 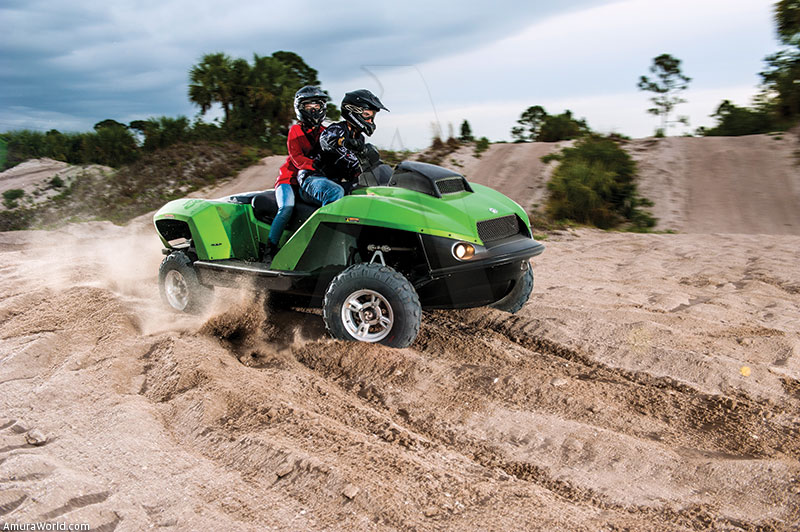 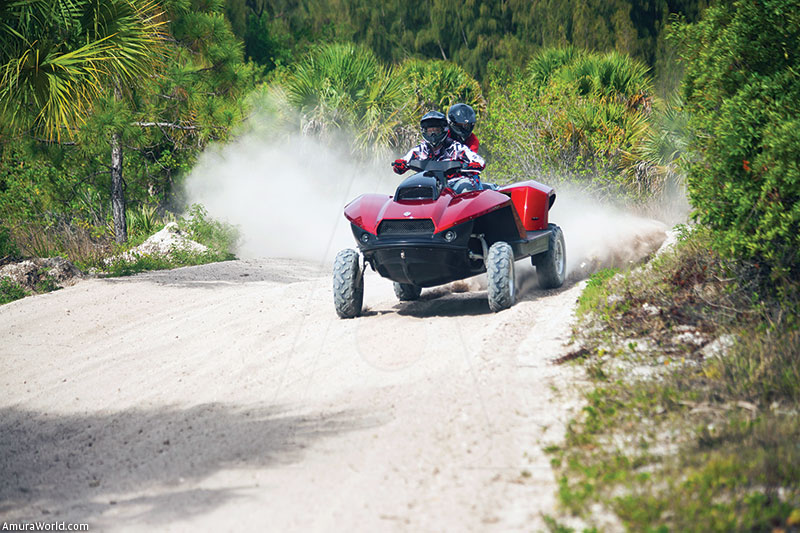 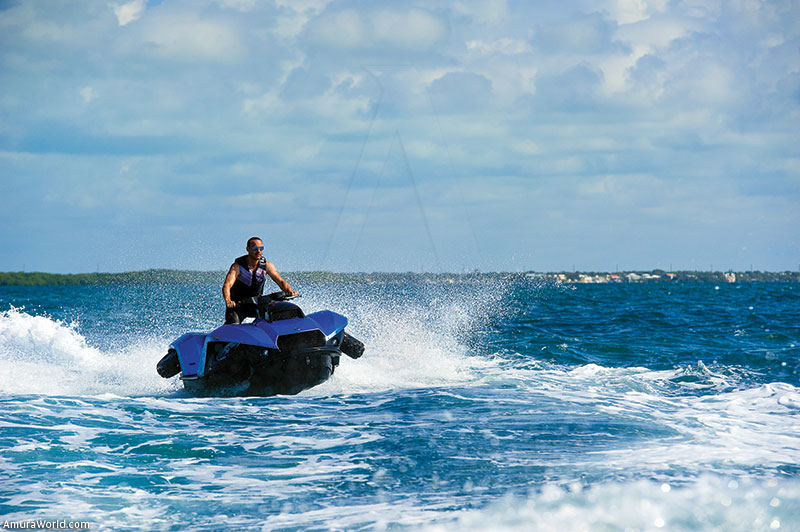 The XL attains around 24 km/h speed on land and 140 horsepower on water. It also offers an exclusive rectractable suspension system, making it nimble on land, though able to retract just seconds after entering water, lasting five seconds the transition from one environ to the other. Its disc brake-wheels aid to stop the rear-wheel drive vehicle instantly, without having to do it gradually or slowly, increasing thus the passangers’ adrenaline.

Even if this Quadski is heavier than earlier models, its versatility compensates the extra weight; its much more dynamic design allows to leave behind this extra weight and offers a sensation of comfort and nimbleness.

This outstanding amphibian is the outcome of several years of research and work in the US, UK and New Zealand, and it represents a new form of transportation by revolutionizing the way in which we separate sea from land, as if they could not be together. It is remarkable the way in which it combines the motion among so different terrains, which makes it unique in its category and in the sportsworld. 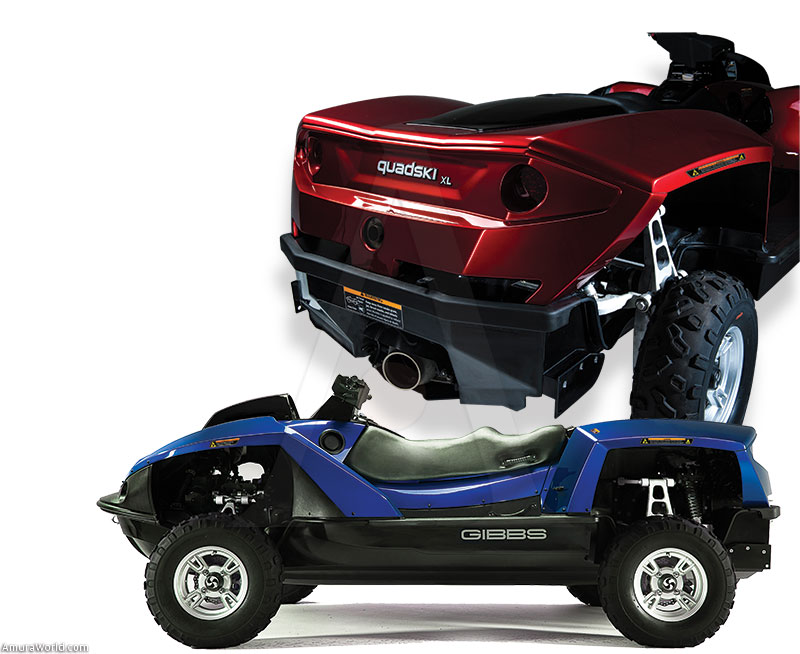 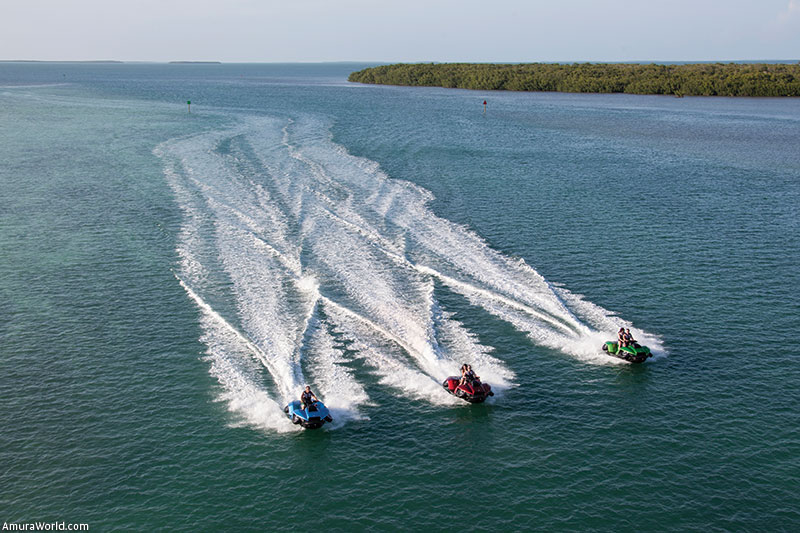 Its design has been thought just to reach a world of possibilities, as many as there are roads on land and journeys on water. It is ideal for sports lovers who oscilate between both worlds, land and water. The fusion of an all terrain vehicle and a jet ski diversifies the activities the user may perform, the places he can visit and the adventures he chooses to have, with no need to plan them in advance.

Gibbs, the leading brand in manufacture of amphibians, has more than 300 patents and patents pending which confirm its leadership upto the creation and innovation of the technology focused on this type of vehicles and their uses. This is just a step forward in the passionate search for surpassing its own achievements, always trying to meet the needs of the most demanding and careful clients who constantly strive to find the best possible quality and go after new innovation horizons. Gibbs Quadski XL was built and conceived at a 54,000 ft2 ensambling plant in Aurburn Hills, Michigan. It is available in four colors: read, yellow, silver and blue. Sale price (suggested by the manufacturer) is $41,125 US dollars. It is ready in most of the dealers in the US.