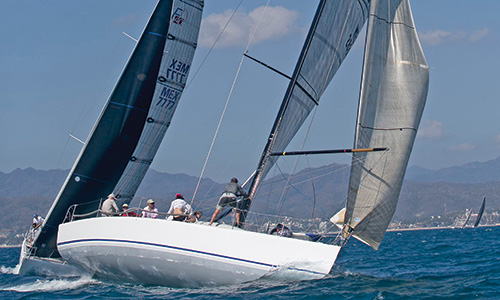 The “Sailing Paradise” shine in the year of  Mexican sailing

“To hold a breakthrough event for Mexico in the history of sailing, allowing it to become part of the global scene,” is the vision of Giovanni Aloi Timeus, chairman of the Mexican Federation of Sailing (FMV). On February 9th, 2016, the first FMV CUP was held. This biannual macro event came about after the success of the sport of sailing in Mexico and the five international regattas that were held through the Mexican Sailing Circuit, which was created and supported by the FMV. Vallarta-Nayarit, a paradise for tourism, was an ideal place to practice sailing; the Pacific Ocean being the seat of this grand event. 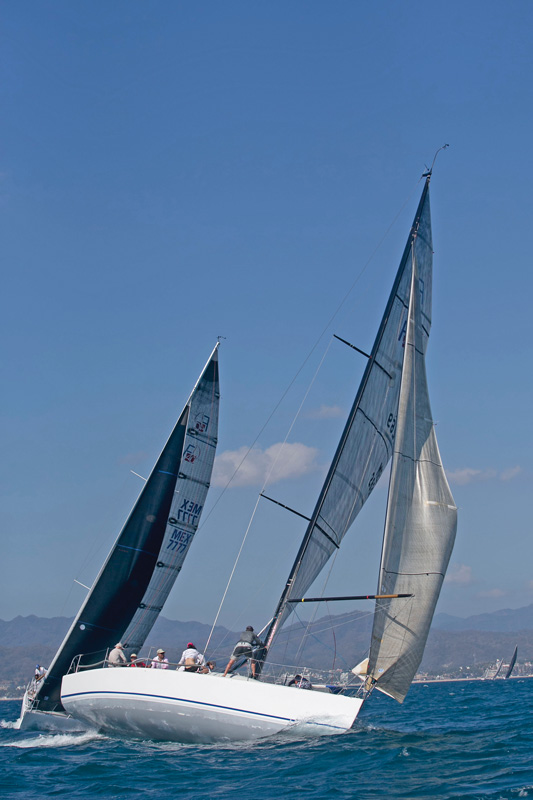 On the 19th of February, anchors were raised to begin the FMV CUP 2016 just off the coast of San Diego. The PV RACE, a 63 year-old regatta and known as the “Sailing Paradise,” saw 21 ships and over 250 sailors compete for around 1,000 miles, from San Diego to Puerto Vallarta. Five Mexican ships competed in this tournament: Ricardo Brockmann’s “Vincitore”, Eduardo Porter’s “Patches”, and Lorenzo Berho’s “Peligroso” and Roberto Vulling’s “Flyer”. According to these participants, these journey was divided into two routes: San Diego to Cabo, and Sea of Cortez to Puerto Vallarta.

Featuring five categories, the ships arrived at the Mexican coast in two to five days. The “Mighty Merloe” vessel came in first place in the 2016 race with a record time of two days, 19 hours, 49 minutes, and 29 seconds. On the 27th of February, the inaugural ceremony of the FMV CUP 2016 took place at the Velas Vallarta Hotel with the presence of Jalisco’s Secretary of Tourism, Enrique Ramon Flores; the Secretary of Tourism for Nayarit, Omar Camarena, Sunana Rodriguez, representing the office of Mayor Arturo Davalos Peña, and Giovanni Aloi Timeus, chairman of the Mexican Federation of Sailing. It was a celebration full of color, music, and traditional dances. 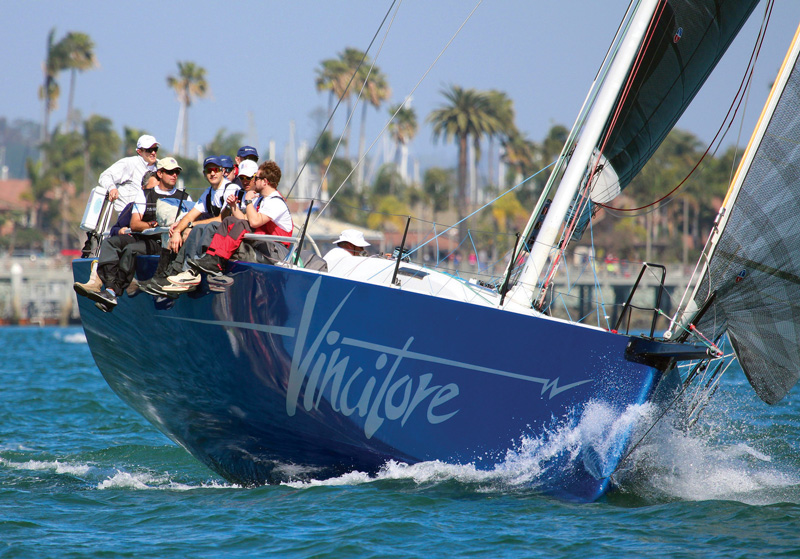 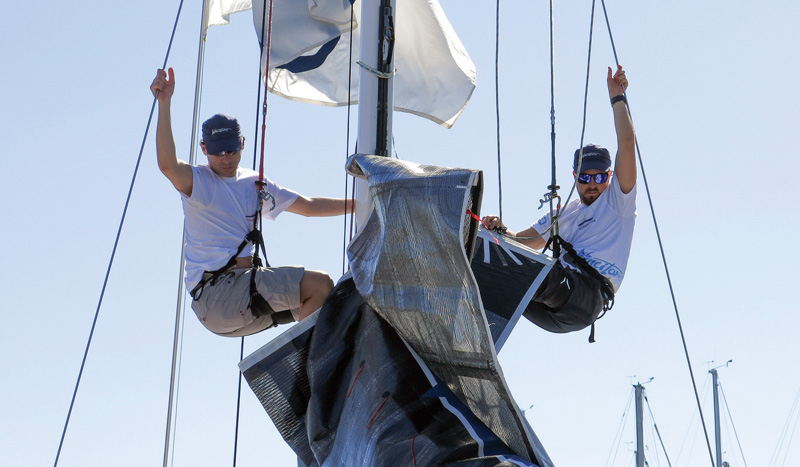 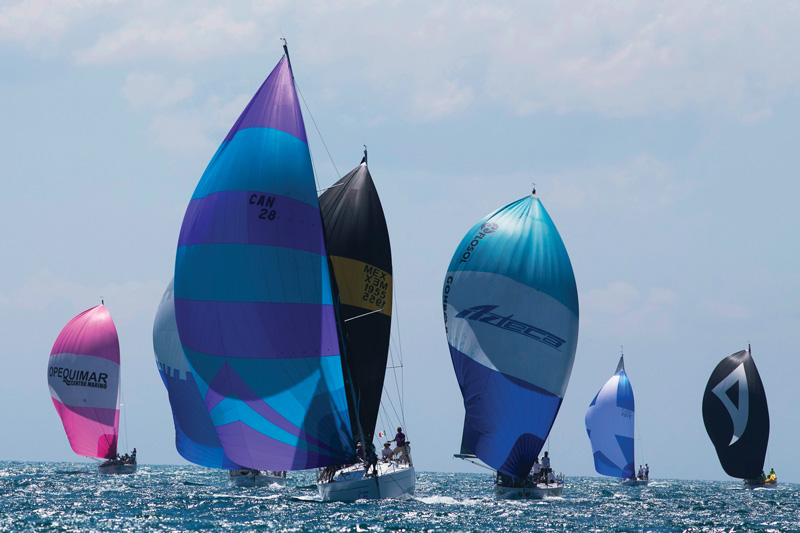 While the oceanic ships wrestled for their places in Puerto Vallarta, the most important light sailing regatta was taking place with over 200 sailors at the “Wesmex International Small Boat Regatta 2016” in the Nayarit Riviera. Boasting 11 years of tradition, Wesmex is one of the key benchmarks in Mexico and the platform from which to jump to international tournaments as part of the selection process for various global regattas. “It fills me with pride to see young sailors, dedicated and committed to the sport… it is because of you that holding these types of events is a worthwhile endeavor and why we will continue to push forward with the sport in our country,” were the words with which the chairman of the FMN opened Wesmex 2016.

The Optimist class (8 to 15 years) surprised again by featuring 90 competitors both beginners and advanced. Yanic Gentry, on the heels of his qualification to the 2016 Rio Olympics, participated in the Laser class; “It always a joy to participate in Wesmex because this is where I started, this is my home,” he mentioned during an interview for the FMV. On the first day, strong waves battered the starting line, yet the security and training crew aided the sailors and kept them safe. On the second day, the wind began to howl at around 13:00 hrs., constantly changing direction; by the third day, starting were positons were nearly defined and the wind reached 15 knots. These conditions demanded that only the most appropriate techniques be used to keep the vessels steadily moving towards their positions.

Wesmexcame to an end with an award ceremony at the Hotel Paradise Village Amphitheatre under the authority of the Vallarta Yacht Club. The winners were: Bruno Aloi Timeus in Advanced Optimist; Mateo Cortez Suarez in Beginners Optimist; Gabriel Toribio de la Cruz and Ignacio Torres Perez in 420; Leopoldo Seifert in Laser Radial; Yanic Gentry in Laser Standard; and Ricardo Perez Gio of RSX and Cristobal Haggermann Haro in Bic Techno.

“Mexroc” (Mexican Ocean Racing Circuit) began on Sunday, 28th of February; 30 ships presented themselves at the dock of the Marina Puerto Vallarta to sail on the most important Pacific and Mexican regatta. The Council for Tourism Promotion was the key to the competition, which also counted on the support of Unifin. Sailors enjoy speeds of 8 to 25 knots during the week’s activities of this regatta that integrates the classic journey from Marietas Islands to Punta Mita. The FMV had the honor of receiving the ex-President of Mexico and faithful promoter of sailing, Felipe Calderon, who himself was sailing on the boat of the chairman of the FMV, Giovanni Aloi Timeus’ “Gladiator”.

After six days of competition, Nueva Luna, Timeshaver, and Vincitore managed to win the tournament in their respective categories, defining their positions in the last trials given the strong competition in this year, 2016. The closing ceremony was attended by Agustin Alvarez Valdivia, chairman of the Puerto Vallarta Tourism Trust; Giovani Aloi Timeus, chairman of the Mexican Federation of Sailing: Ernesto Amtmann, chairman of the Mexican Association of Oceanic Sailing; and Juan de Pablos, manager of the Acapulco Yacht Club. 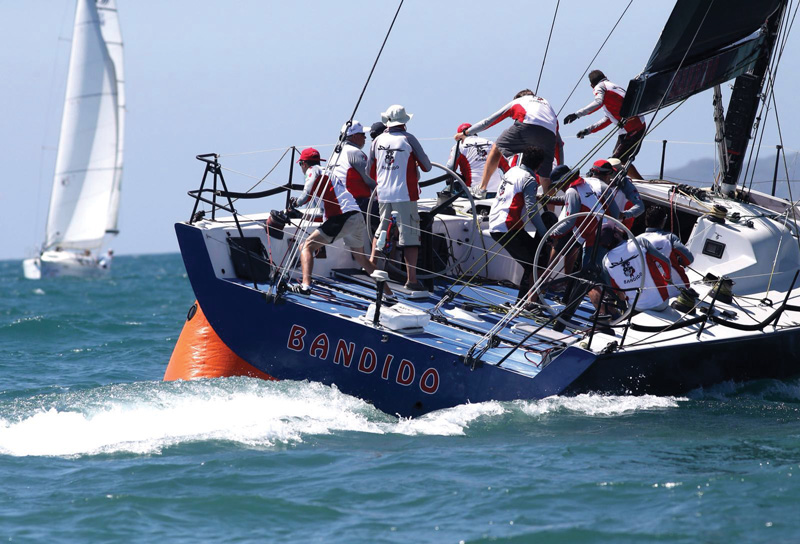 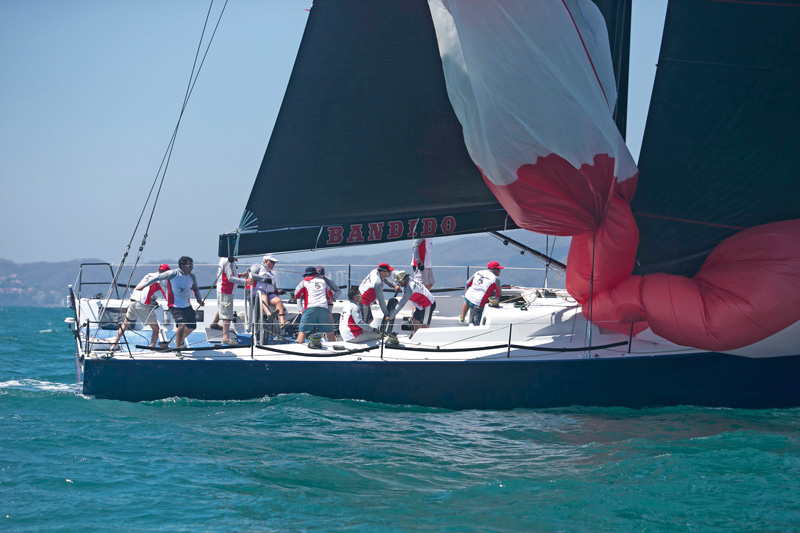 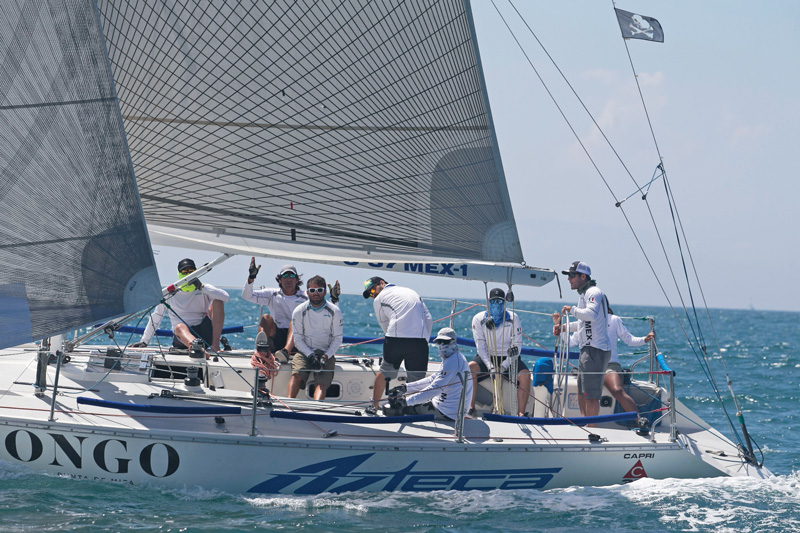 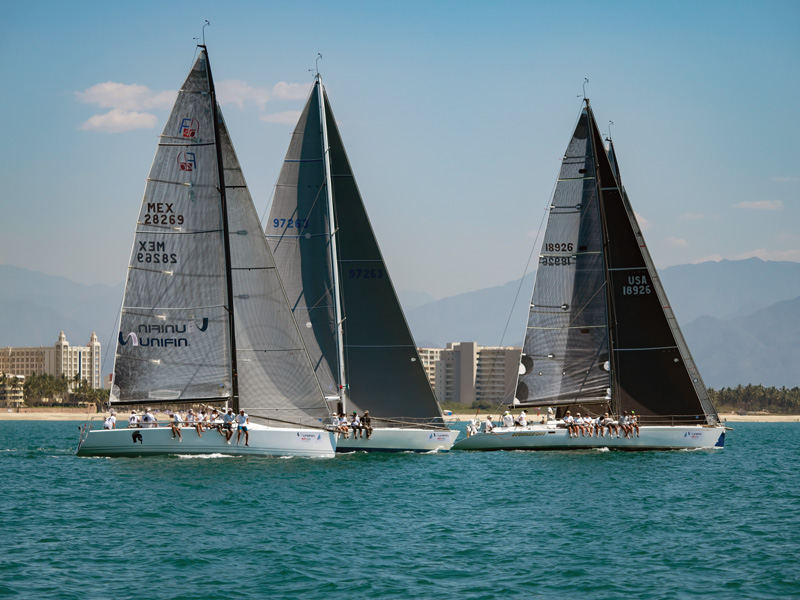 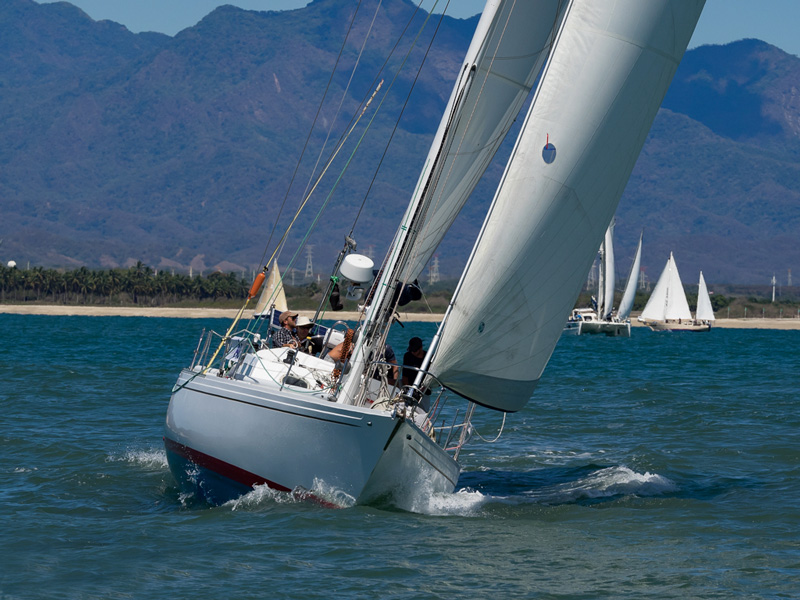 The fourth stop of the FMV CUP was also one of the most entertaining regattas of the Nayarit Riviera. The “Banderas Bay Regatta 2016) (BBR) opening ceremony was attended by over 250 sailors, and astounded with a “Cirque Du Solei” show. Other activities included a guided tour of the premises, a ship decoration contest, festivities, and other events. This five-class tournament was held over three days, each day focused on a single trial. The wind began to pick up at around 14:30 hrs., blowing at 10 knots and occasionally at 18 knots on the last leg of the trials – a classic phenomenon in this sport. The longest route, from Banderas Bay to Puerto Vallarta, was 15 miles long, and offered a colorful spectacle of sails that was visible from the coast. The award ceremony, a traditional Mexican festivity, was held at the Paradise Village.

The first phase of the FMV CUP 2016 had successfully concluded, and, with the Holy Week on the horizon, the finishing touches were given to the event with which the FMV would end its festivities with a bang: The Laser Class World Championship. Only the most elite sailors in the world traveled to the Nayarit Riviera to compete in the Olympic-class event.

Nayarit’s Secretary of Tourism, Lic. Omar Camarena Gonzalez, along with the Executive Secretary of the International Laser Class Association (ILCA), Jeff Martin, and Luis Barrios, chairman of the Mexican Laser Class Association waved the flag at the starting line of this championship, were 72 sailors from 32 countries—10 of them Top 20 sailors in 2012—participated. Paige Railey, from the United States, was a favorite for the gold, yet it was Alison Young of Great Britain that won the championship during her last regatta by a minimum margin; Paige Railey kept her silver medal. She was followed by Anne Marie Rindom, from Denmark. Four promising sailors from Mexico competed in this event, and were able to mingle with a few of the finest sailors in national waters. Gold Olympic medalist Lijia Xu from China came in 7th, while the Mexican sailor Tania Elias Calles waved goodbye to her last world championship coming in 28th place.

To face 20 knot winds and strong gales as well as moving currents requires great physical and mental strength. This championship, boasting veteran sailors 35 to 75 years old, saw overturned boats, beaten faces, but above all, hearts full of pride. For six days, 140 sailors from 18 countries, including 12 Mexican sailors competed in this event. Scott Leigh of New Zealand, Carlos E. Wanderley of Brazil, Vanessa Dudley from Australia, Robert Lowndes of Australia, and Peter Seidenberg of the United States took the gold in their respective categories. 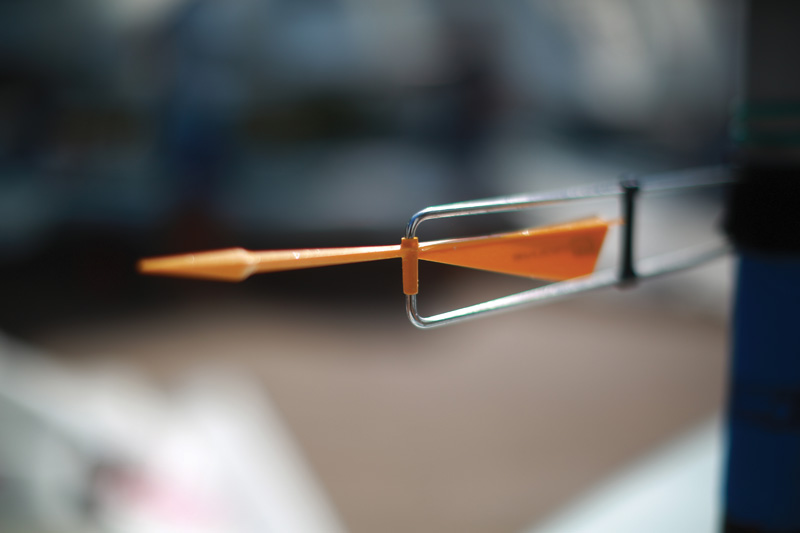 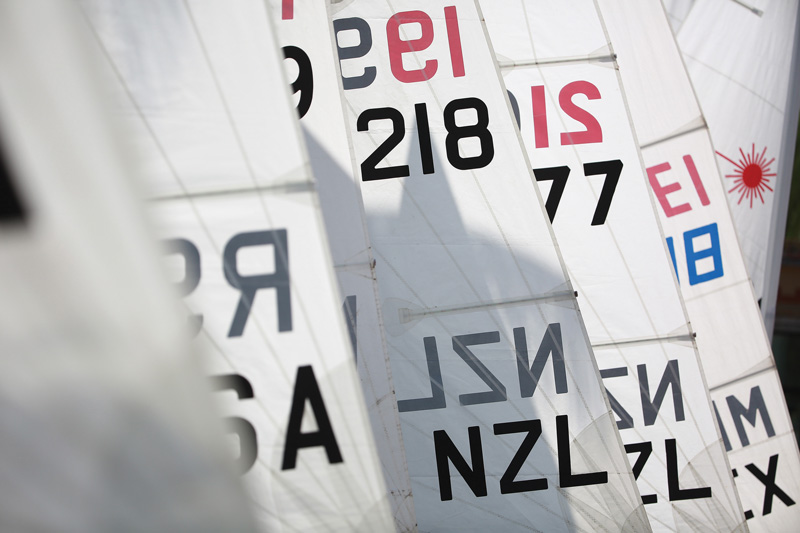 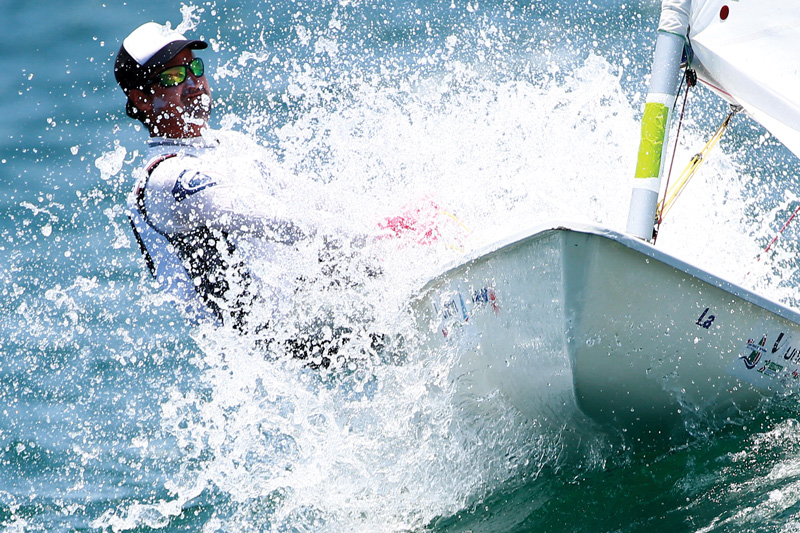 The overall ranking top 10 of the International Sailing Federation (ISAF) and the top 10 Olympic sailors from 2012, competed at Mexican waters in an event that exceeded all expectations. Prior to the 2016 Olympics in Rio, for most Olympic sailors this championship was the last chance to preliminarily face their rivals before the most important event. For seven days, with two racings each day, the positions where played until the last minutes.

The FMV had the honor of receiving the Secretary of Federal Tourism, Lic. Enrique de la Madrid Cordero, at the closing ceremony. He recognized the arduous labor of the FMV across Mexico. Other participants at this event included Nayarit’s Secretary of Tourism, Lic. Omar Camarena Gonzalez; spokesman for the Mexican Olympic Committee, Ralph Nelles, and the Executive Secretary of the Internal Laser Class Association, Jeff Martin. For his part, Pedro Luis Benitez thank the tireless efforts of the Regatta Committee, recognizing the excellent teamwork of the FMV.

Nick Thompson from Great Britain won his second Laser World Championship – becoming part of an elite group of sailors boasting two consecutive titles in this event. He remarked, “The 2016 Laser World Championships was without a doubt the best sailing event I have ever competed in; the conditions for sailing were fantastic allowing for racing to begin on time every day without delay. This was aided by the fantastic race committee who were very efficient and professional from race 1 right through to the last race on day seven. I can’t recommend Riviera Nayarit and the organizing authorities enough. Well done!” 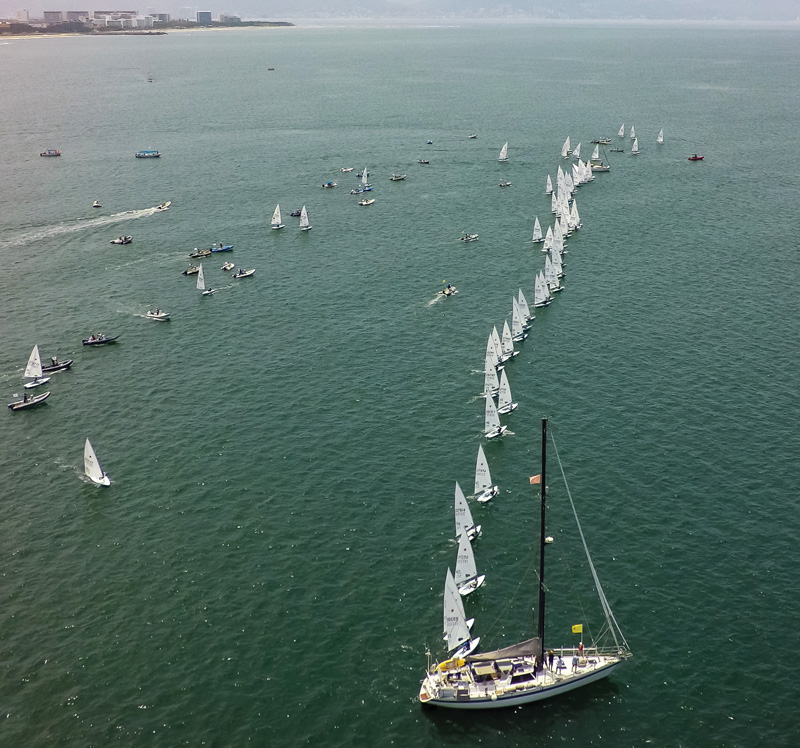 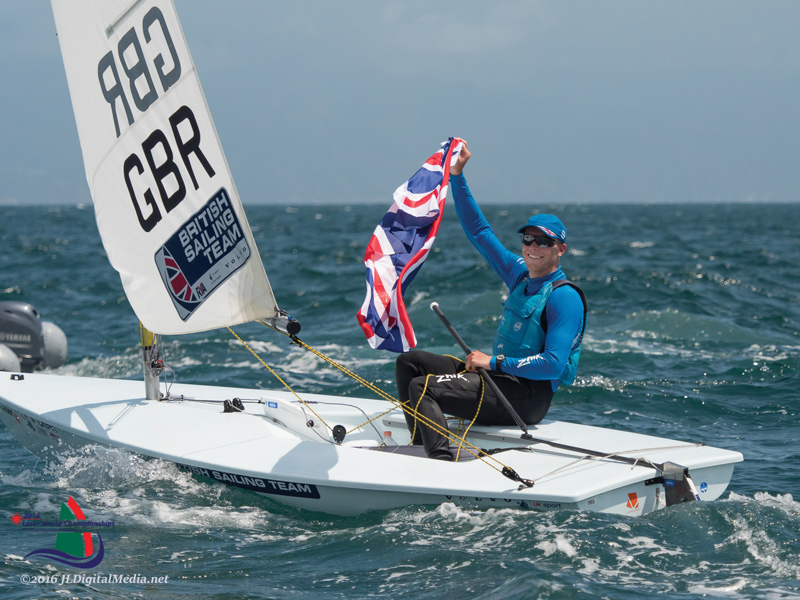 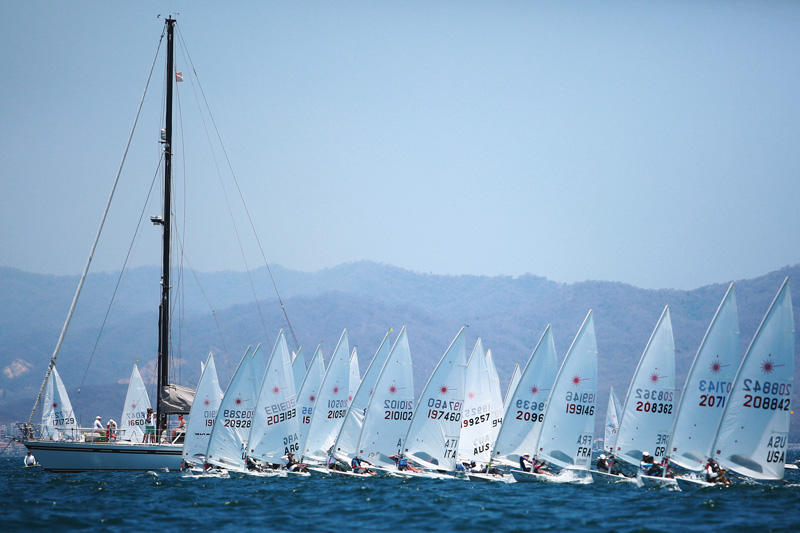 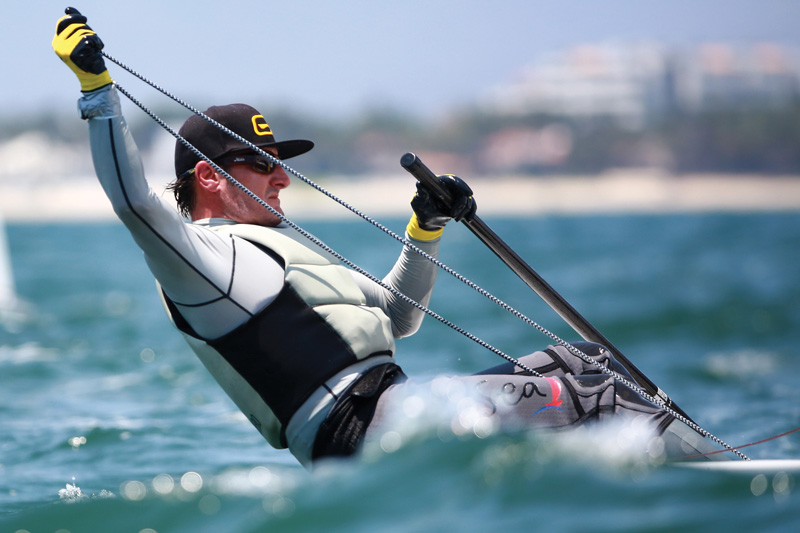 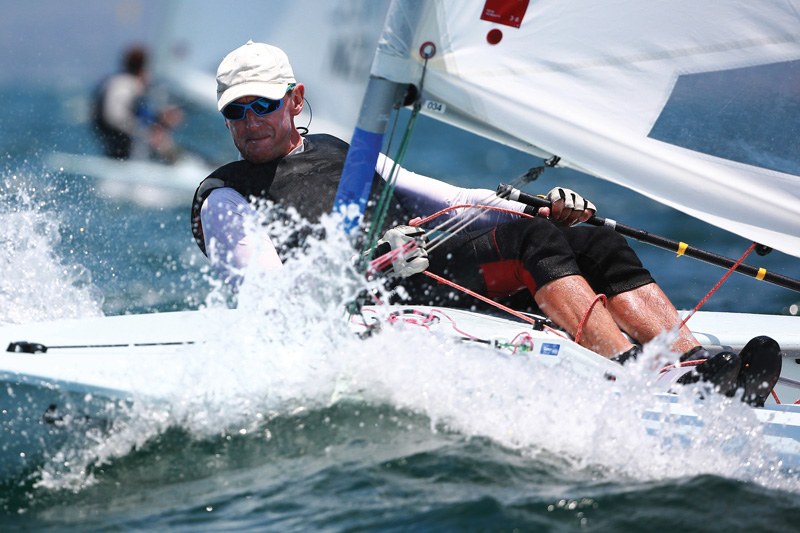 The FMV CUP could not hope for a better closing event than for Mexico crowning itself champion in the “Apprentice” class, with Pablo Rábago coming in first place. He shared the podium with his brother, Alejandro, who came third. After four months of grueling activities in Puerto Vallarta and the Nayarit Riviera, the 2016 FMV Cup came to an end with monetary gains of 311 million and 703,000 pesos, as well as the global promotion of tourist destinations such as “Sailing Paradise,” which will be paving the way for future world-class events.

The FMV CUP gathered over 1,434 sailors ranging in age from 8 to 75 years old, and 695 vessels of the Oceanic, j70, Cruise, Optimist, 420, Windsurfing, and Laser Class, this last one being the most important tournament before the Rio Olympics. In total, 53 countries were represented, including the United States, Great Britain, Argentina, China, France, Croatia, Poland, Denmark, New Zealand, Brazil, Cyprus, and Mexico, which acted as host. Banderas Bay was filled with sailors from the 21st of February to the 28th of May, fulfilling an objective set by the FMV: promoting tourism to these destinations by way of this both national and international event.

Giovanni Aloi, chairman of the FMV, closed the ceremony by declaring: “This event would not have been possible had it not been for the support of the government of Jalisco and Nayarit, as well as the Mexican Council for the Promotion of Tourism, and the National Commission of Sport and Physical Culture (CONADE), who gave us their confidence from the start, but, above all, I wasn’t to thank each and every person involved in the planning and execution of this event who, thanks to their commitment, passion, patience, and excellent labor, have raised the name of Mexico up high.” In this convivial scene, the 2016 FMV CUP waved goodbye to Puerto Vallarta and Nayarit Riviera, promising to be a biannual event that promotes the sport of sailing in our country, and a world-class tourist destination. The Mexican Federation of Sailing would like to thank Unifin for its sponsorship and coverage, as well as the San Diego Yacht Club, the Acapulco Yacht Club, the Vallarta Yacht Club, and Paradise Village.

We’ll see each other in the 2018 edition of the FMV CUP… Let us live for sailing!