The seventh edition of Les Voiles de St. Barth: "the Formula 1 of the sea" 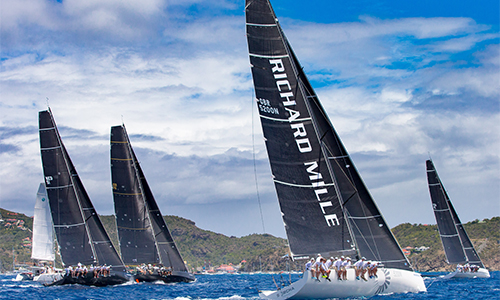 The annual sailing regatta at the Caribbean sponsored by Richard Mille, just celebrated its seventh edition this April 2016. Les Voiles de St. Barth brought together 1,100 sailors and 70 participants in four days of racing, where the Grand Prix winner was an RM 60-01 Automatic Chronograph Flyback Regatta.

The most prestigious sailing teams met in Gustavia Bay to compete. At the end, In the end, it was Proteus, belonging to the American, George Sakellaris, and skippered by Stu Bannatyne, that finished first among the Maxi Yachts of the Voiles de St. Barth’s 7th edition. The crew received an RM 60-01 Chronograph Flyback Regatta.

RM 60-01 is driven by an RMAC2 automatic calibre in grade 5 titanium. This marvel offers a 55-hour power reserve, a variable inertia balance wheel, and a flyback chronograph, annual calendar, large date and UTC functions. The RM 60-01 facilitates navigation thanks to its capacity to orientate the wearer in both the Northern and Southern hemispheres without additional calculations, and the rotating bezel indicating the cardinal directions and a 360° graduated disk with a 24hr counter.

“Richard immediately understood what the Voiles de St Barth were all about—a combination of technology and pleasure absolutely in tune with the concepts behind his watches,” explains François Tolède, organizer of the Voiles. “The Maison Richard Mille makes veritable racing machines for the wrist, whereas we gather together the “Formula 1 of the sea”.

Richard Mille has been the main sponsor for this race since the first edition, almost eight years ago. The eighth edition of the Voiles de Saint Barth will take place from 10 to 15 April 2017. For this 7th edition, take part nine different classes of sailboats from 24 to 100 feet in length, with capricious winds where the last day was the most exciting.

“The boats that compete in the Voiles de St Barth are among the most technically sophisticated yachts in the world,” points out Ken Read, chairman of the 2016 edition. “In difficult wind conditions such as we saw this year, crews compete on a technical level to take the lead. This is where the partnership with Richard Mille takes on its full significance—his watches are inspired by these self-same cutting-edge technologies. The Voiles embody a perfect combination of the sailing community and Richard Mille’s Haute Horlogerie”.