Situated in the midst of the green hills, Santiago, where the remains of the apostle are preserved in a sumptuous silver urn, is one of the world’s most important pilgrimage destinations. Roads have been built to reach it and traversing them on foot makes one worthy of earning a portion of paradise. The longest and most commendable is the French one.

The cathedral, built in the 11th century, is notable for its stone chorus and its Pórtico de Gloria, the fabulous iconographic monument of its medieval structure and where tradition enjoins one to embrace the pillar. Its impressive façade dominates the beautiful Plaza do Obradoiro, framed by the 15th century Plateresque Hospital de Peregrinos, which is now an inn with an opulent chapel and interior patios; the neoclassical Pazo de Raxoi, the Colegio de San Jerónimo, with its 15th century façade and now the rectory of the University; and the Pazo de Gelminez. 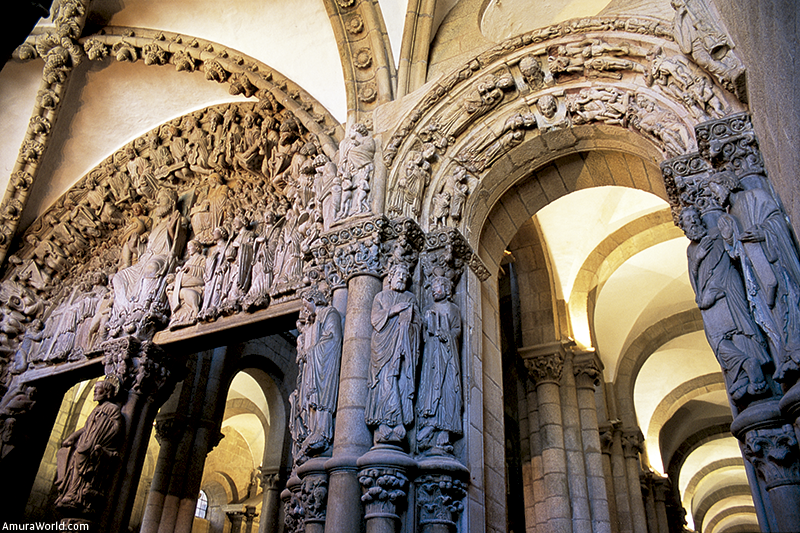 Exploring the city, we discovered impressive monuments, like the Renaissance style Colegio Fonseca and its beautiful cloister, the cathedral’s Puerta Santa, which is only opened during holy years; the impressive Torre del Reloj, which creates a baroque front with the Casa de la Parra and Casa de los Canónigos; and the infinite, massive wall of the Convento de San Paio de Antealtares. Plazas, either bare or framed by arches, appear in the streets and we wandered among them until we reached the Casa de la Troya, the Azabachería and Martín Binario Benedictine monastery, which are truly outstanding among the architectural wonders that embellish this holy city. .

Santiago, where students, visitors and pilgrims amble by, is an authentic, living museum that beats to the rhythm of a never-ending celebration. It is the pearl of the west, the jewel of Galicia.