During the early 1930s, Puerto Peñasco, known as Rocky Point by North Americans, was famous for being a refuge of adventurers and fishermen but, in the last decade, it has become Arizonians’ favorite beach destination.
Puerto Peñasco is located in northwest Sonora, in the upper region of the Sea of Cortez, 100 km (62 mi) from the U.S. border (350 km/217 mi from Phoenix). To the northwest it borders San Luis Río Colorado, Caborca to the southeast and the Gulf of California to the south. 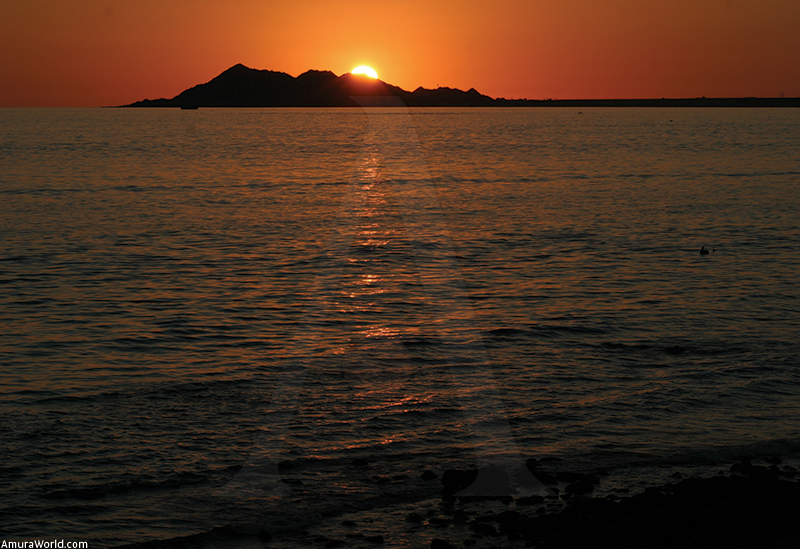 About 31,757 people live here and the main economic activities are fishing, tourism and commerce. Its very rich, 110-km (68-mi) coastline is particularly important to the first two.

For example, in what refers to tourism infrastructure, it already has over 70 restaurants, 42 hotels and motels with 2,012 rooms —which represent 14% of Sonora’s total— as well as 14 trailer parks with a total of 1,435 spaces.

Expectations for this sector are solid with a high impact on the socio-economic structure of the state: it receives 1,000 visitors per day of which 85% are from Arizona. With an average stay of 3.1 days, the hotel occupancy rate is 50%. 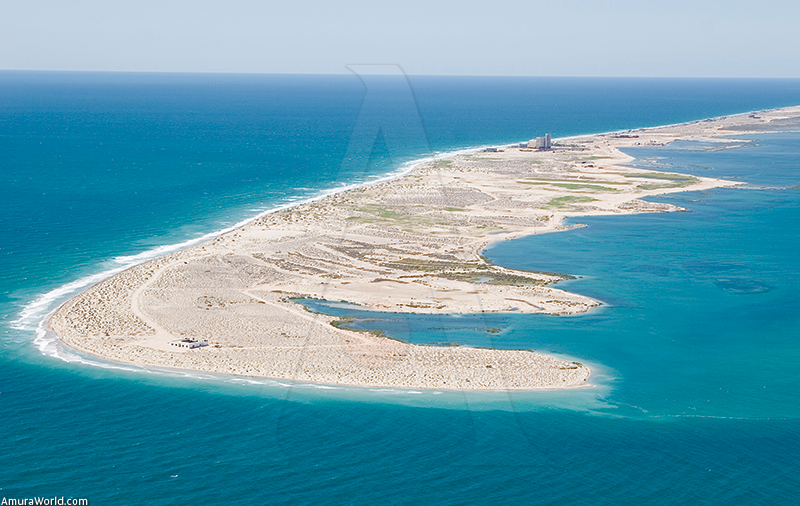 It is important to note that this city is located in a free zone, where visitors can easily enter the country without having to go through immigration. The distance to the state capital is 522 km (324 mi), about a five-hour drive, but there is also a short-range international airport that offers all services for those who arrive by air.
Puerto Peñasco receives about 200,000 domestic visitors, mainly from neighboring states, who usually arrive by road, even though the state has three important airports, in Hermosillo, Guaymas and Ciudad Obregón, which, however, are not very close to this destination.

A Boost From Nautical Tourism
Along its 1,200 km (745 mi) of coastline, Sonora has three fully functioning marinas and three under construction. Two of the most important, Marina San Carlos and Marina Real, are located in San Carlos Bay, which belongs to the municipality of Guaymas. Together, they provide 700 slips, as well Marina Bacochibampo, being built in the bay of the same name. The third is found in Puerto Peñasco, though it has a limited capacity of 19 spaces: nine that are 31 feet, nine that are 41 feet and one that is 71 feet.

The usage rights to these spaces are sold and they are generally occupied by the boats of owners, who sometimes sublet (it is said they charge 20 dollars per foot per day). There is also a project to build another marina here and another in Kino Bay, in the municipality of Hermosillo.

Because of the probability of further expansion of the nautical market, stimulated by North American demand, the best opportunities for developing tourism marinas in this region are available in the Escalera Náutica del Mar de Cortés / Escalas Náuticas Singlar (Sea of Cortez Nautical Stairway/Singlar Nautical Stairway).

Lots To Do
Sonora has a privileged geographic location and is surrounded by the sea, desert and mountains. It offers visitors a variety of activities including diving, eco-tourism, hunting and fishing in the ocean and dams.

Puerto Peñasco has amazingly beautiful beaches. Its miles and miles of white sand lapped by soft waves make it idea for surfing, sailing, skiing, boat rides or simply taking a walk and enjoying the balmy marine breeze. But if what you want is action, the Altar Desert is where it never ends. Special sand motorbikes and buggies increase the excitement to the maximum among young fans of the races and sports trials that attract a growing number of followers every year.

And, for the ecological tourist, this spot reserves a special surprise: the El Piñacate Sierra, a volcanic shield considered a unique, natural jewel and declared a Biosphere reserve. 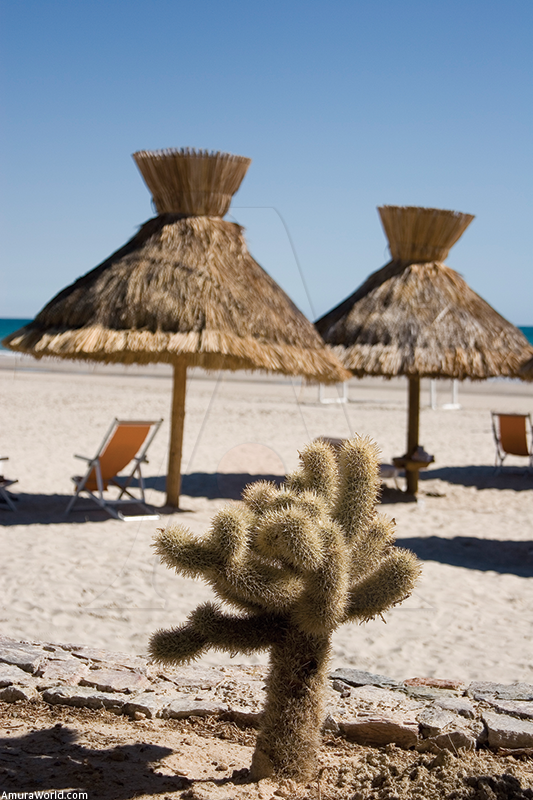 Fishing and Diving
It goes without saying that in Puerto Peñasco fishing and diving can be enjoyed in safety. For those who want to explore the submarine world, nearby San Jorge island offers the opportunity of getting up close to sea lions, dolphins and the rare vaquita, a species in danger of extinction only found in the High Gulf of California.

The CER-MAR aquarium is a marine research center that is open to the public. It exhibits turtles, seahorses, octopi and countless species of fish and creatures that live in the depths of the seas.

In Puerto Peñasco you can catch coveted species like cochito, flounder, cabrilla and dorado as well as a huge fish called “pescada”, which can weigh up to 450 kilos (992 pounds). The best time to fish is in February, July, August and September. Cochito and cabrilla are available ‘year round and, from October to February, you can find baya, pescada, pargo, baqueta, corvina, sierra and pompano. April is the best month for sailfish and dorado. 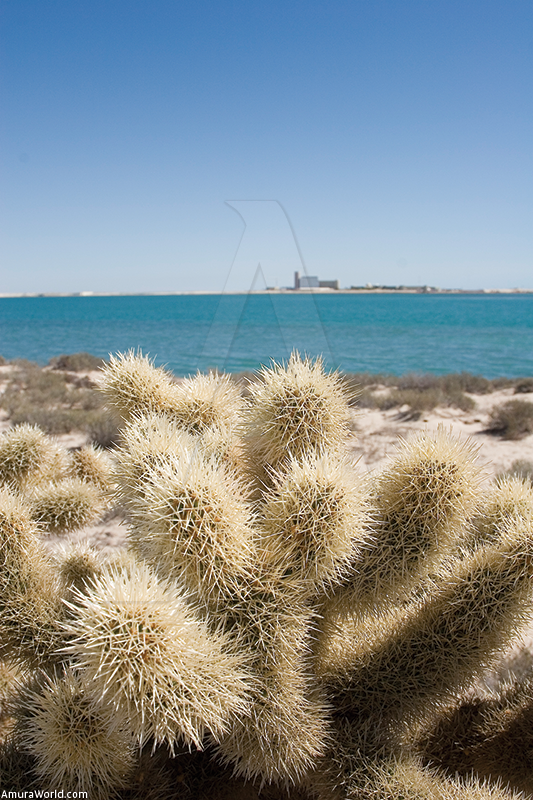 Puerto Peñasco is host to three important tournaments. One is the “La Cholla Bay Club”, which takes place at the beginning of July, and two are organized by Desarrollos Turísticos de Peñasco, the first during February, March and April and the second, known as “Angler of the Year”, in February and October.

On the other hand, the transparent waters of the splendid Sea of Cortez, 1,200 km (745 mi) long, 222 km (138 mi) wide and 3,500 meters (11,483 ft) deep, which was formed five million years ago as a result of the San Andreas Fault, which separated the Baja California peninsula from the continent, has created a home for over 800 varieties of fish and more than 3,000 species of marine animals like sharks, whales, dolphins, crustaceans, invertebrates and mammals.

All of this makes Puerto Peñasco an ideal diving site. The best season is during the summer, when the temperature of the ocean is perfect (27-31 °C/80-88 °F) and there is sufficient daylight visibility. During the winter the ocean’s temperature varies between 12 and 15 °C (53 and 59 °F).

Hunting
Hunting in Sonora is one of the region’s principal tourist attractions and it is backed by excellent infrastructure as well as by hunting organizations.
Sonora is one of the states that has the biggest draw for fans of this sport, thanks to the great variety of species, 300 ranches with exceptional potential and the services offered in the different localities that offer hunting.

The mule deer is considered one of the world’s best trophies, as is the imposing big horn sheep and the white-tailed deer. The area also has white-winged and mourning doves, ruddy pigeons, wild turkey, quail, 10 species of duck and three of geese. 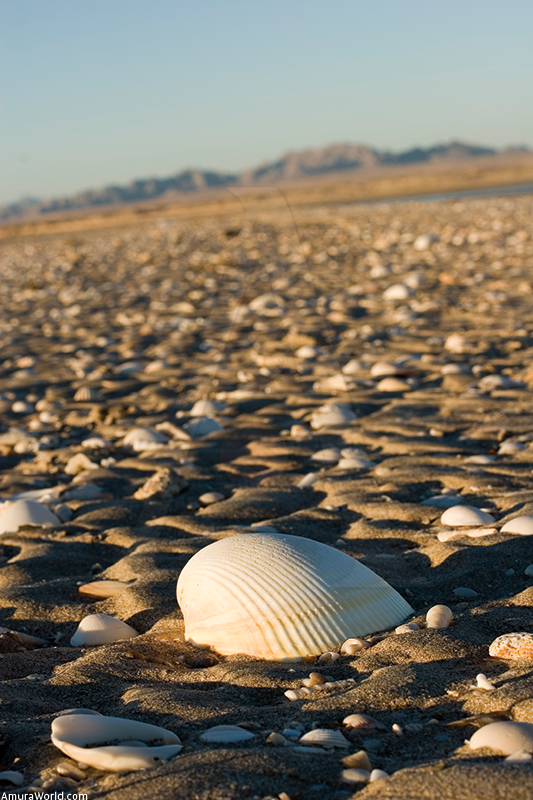 Golf
Golf’s popularity has grown in recent years as evidenced by the new courses being built in many places. Sonora has superb golf courses that attract both domestic and international tourists.

One of the courses that will surely be one of Mexico’s most important is being built in the Laguna del Mar development. Jack Nicklaus designed the 18-hole course. Furthermore, there are at least four more golf courses in the works here. Sonora currently has four functioning courses.

Tourism Industry Data
According to information supplied by the government of Sinaloa, Puerto Peñasco receives 1,600,000 tourists a year. They arrive mainly by land and, in the last 10 years, they have generated one billion dollars, part of which has been used for munici- pal taxes.

Sonora’s Comisión Estatal de Turismo (State Tourism Commission) estimates that about 5.6 million tourists visit the state every year and they expect that this year the number will climb to six million. The main beach destinations are San Carlos, Puerto Peñasco and Kino Bay.

The tourism sector reports that profits were above 12,000 million pesos, of which 7,400 million were generated by domestic tourists and 5,400 by international visitors, mainly from the U.S. 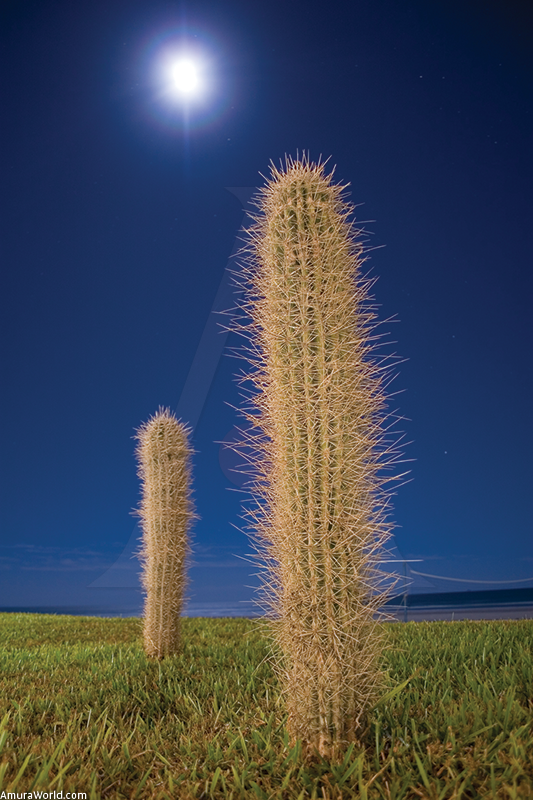 Investments
The growth of tourism complexes has affected local economies, especially on the north coast, which is developing significantly. In the area, there are important residential developments of up to 1,500 condos among which the foremost are Sandy Beach Resorts, Costa Diamante, Sonora Sea, Bella Sirena and Las Palmas.

They are preparing Puerto Peñasco for major growth.
According to surveys made among developers in the area, the residential expansion of the port provoked a rise of from 3,000 to 4,500 dollars per square meter in only a year.

Today, it is the location with the highest rate of sales per project —122.7 a month—, and nine new projects are available. Monthly sales average 54.76 million pesos, according to data supplied by Softec. Prices of properties range from 100,000 to one million dollars.

Puerto Peñasco developers estimate that the growth of the real estate market here is close to 20%, supported both by the sale of properties and plots. Nowadays, local and international investors are involved in projects requiring investments over 1.3 billion dollars.

Beck Internacional de México, a branch of one of Dallas’s most important construction companies, won the bid to build Bella Sirena, a Pelican Partners International project. According to the developer, Bella Sirena is a resort with 220 condos, 12 villas, eight beach houses, shopping center, restaurant, Spa, fitness center, tennis courts and several swimming pools. They plan to finish in 2006.

Another development in Puerto Peñasco is Laguna del Mar —with an investment of 300 million dollars— which includes, at mid range, a marina for 100 boats, Club House, a 360-hectare (889-acre) lake, 18-hole golf course and a shopping center, one-family residences, condos and hotels with a total of 2,000 rooms. 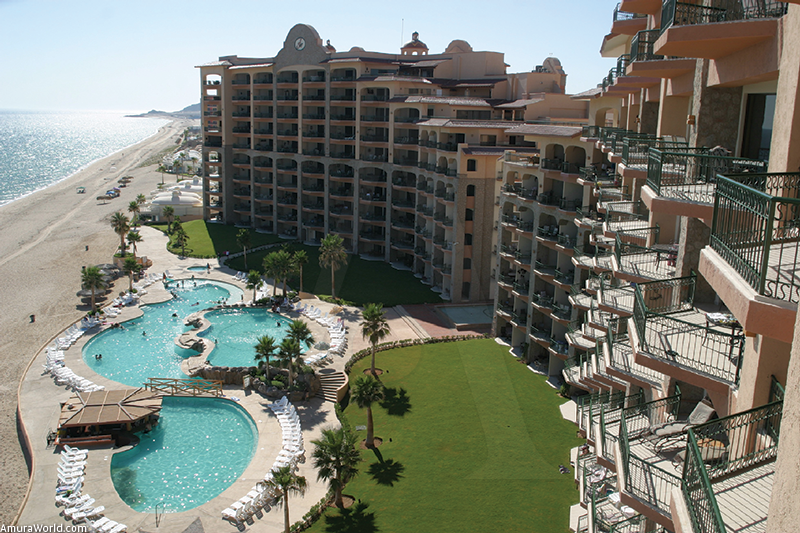 Grupo Mayan Palace is going forward on their investment of about 70 million dollars earmarked for the Puerto Peñasco airport. The concession was granted to them by governor Eduardo Bours, who is betting on the development of a tourism corridor in this zone.

Mayan Palace is basing their business strategy on the arrival of about 15 million tourists, mainly from Arizona and New Mexico, looking for recreational destinations they can return to every year.

Other projects going up are Las Palomas Resort, a development on 135 hectares (333 acres) that plans to build 2,158 residential units, a Club House, and an 18-hole golf course, among others. The first phase, which started at the beginning of 2004 with the construction of the golf course and the first 448 condos, is due to be completed soon. Backers, who are from the U.S., foresee a total investment of 354 million dollars.

There is also Playa Norte, with combined Spanish, Mexican and U.S. investment totaling 600 million dollars. The first stage includes a golf course, 100 villas, an artificial lake surrounded by hotels, condos, residential plots, etcetera. The development is on 12,000 hectares (29,652 acres) and, in its first phase, calls for four 18-hole golf courses with two, par 3 holes at the edge of the sea and around the lake as well as three hotels on a total of 30,000 hectares (74,131 acres).
Foreseeing the potential of this area, this year Sonora’s authorities decided to invest more than 40 million pesos in the state’s tourism industry. 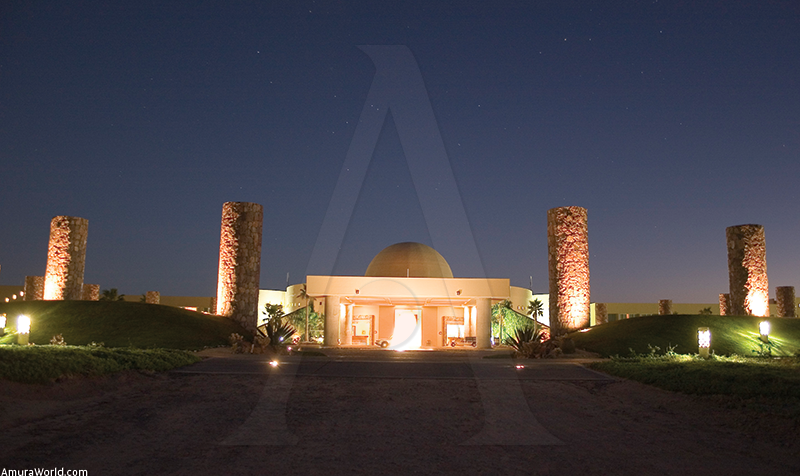