Buenos Aires tango dancing is reflected in the Rio de la Plata, an inland sea that stretches before emptying into the Atlantic. The theaters are full, the restaurants are awake and the music escapes the streets carrying Gardel wailing. The most European city in the southern hemisphere is a star with a melancholic and magic background from San Telmo to the marina of Puerto Madero, via La Recoleta.

Buenos Aires was established in 1536. It began to grow with the arrival of Italian immigrants, in 1840. Today, is a capital whose neighborhoods vibrate by their very particular personality. 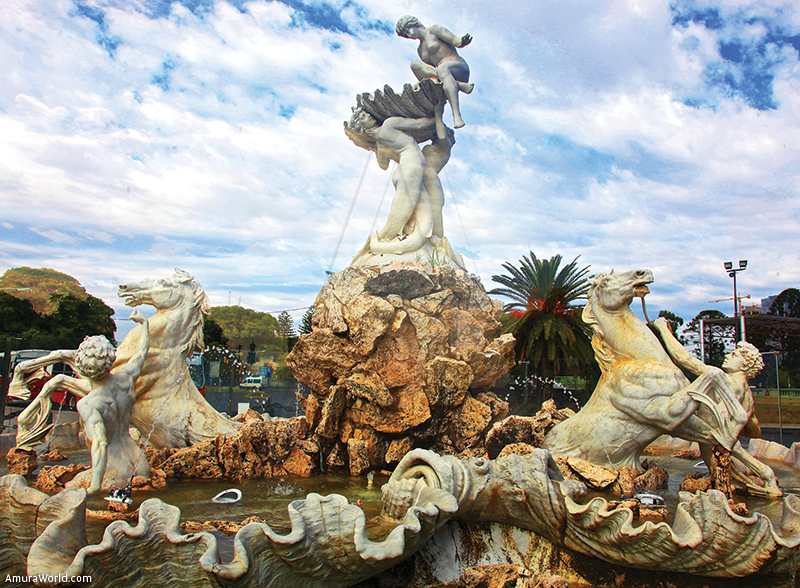 Day 1 - The Recoleta and Puerto Madero

We flew LAN airlines and on arrival we settled at the Four Seasons Hotel (www.fourseasons.com/buenosaires/) in La Recoleta. The elegant rooms make you feel as though you are at a palace next to the Patagonia. The staff is very professional and friendly.

Our plane arrived early, so we had a chance to enjoy an excellent breakfast in the Hotel’s restaurant “Le Mistral”, rest a while and then go for a walk. La Recoleta is the heart of the elegant district, designer stores, next to museums, luxury hotels, art galleries, beautiful women and always crowded terraces of people enjoying the sun and seeing and to be seen.  During the weekend, the garden is filled with craftsmen and the curious, enjoying the sun in the grass. There is always something to do after visiting the cemetery, a must in Buenos Aires. La Recoleta is the aristocratic quarter where we discovered the wonders of the French-influenced architecture. Residents are dressed in the luxury shops, the streets are a true display of elegant and extravagant people.

We had dinner at Cabañas Las Lilas (www.laslilas.com) in Puerto Madero, the old warehouse area which have been transformed into stylish restaurants and have become a trendy place to eat overlooking the marina. Las Lilas is one of those exquisite sites where you can meet people from all over Buenos Aires. We visited the Museum of Fine Arts and ended our day shopping and drinking coffee in one of the Recoleta’s terraces. After enjoying a snack at the La Mansion bar, we arrived at the  Porteño Theater to see the play “Made in Lanús,” one of the great classics of contemporary Argentine theater. After that, we went for dinner to the mythical Cafe Tortoni (www.cafetortoni.com.ar) to listen and see dancing a wonderful tango. 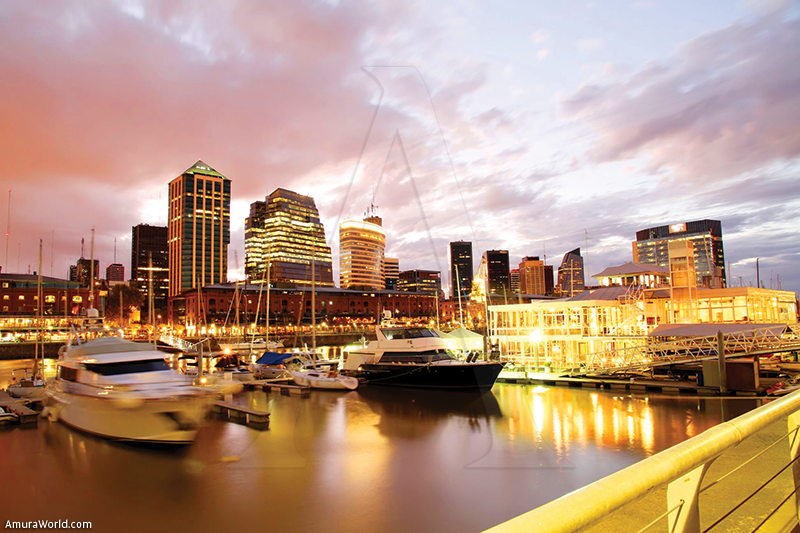 To wake up in the Four Seasons is to start the day in the glamor of Buenos Aires enjoying spring. We went to Palermo and started the tour at the Museum of Latin American Art where, besides admiring works of Latin American artists, we enjoyed some samples of Frida Kahlo and Diego Rivera’s talent. We wandered through the different areas of Palermo, discovered the botanical garden, the Zona La Imprenta, Palermo Chico and its shops, Palermo Hollywood with its cafes and restaurants, and Palermo Soho, where we settled to eat.

We then headed to the tumultuous street Florida downtown, crowded with shops and malls, next to the elegant Avenida 9 de Julio where the Colon Theatre and its famous obelisk are. We ended our day touring the very Parisian avenue de Mayo before reaching the Casa Rosada.  We can imagine Eva Peron addressing the crowd from the balcony. We visited the Cabildo and the Cathedral, savoring the city’s history told by these walls. The night fell over the voices of the past, the Italian immigrants demanding, from their boats, the history surprises parading in my mind. Argentina has suffered, that is why the people sing tangos.

We then headed to the restaurant La Cabrera (www.parillalacabrera.com.ar), one of the best in this capital, to taste the famous beef from Argentina. Here meat is served in large portions with typical cuts and prepared on the grill. At 9 we were at the theater to see the play “She in my head”, a fun comedy in local style. We ended our day listening to tangos and milongas in the Old Warehouse (www.viejo-almacen.com.ar), one of the most famous corners in Buenos-Aires, in the neighborhood of San Telmo, where the atmosphere is heated by the tone of a weeping of accordion. The night breathed spring while we walked a bit before entering our Argentinian palace, the Four Seasons. 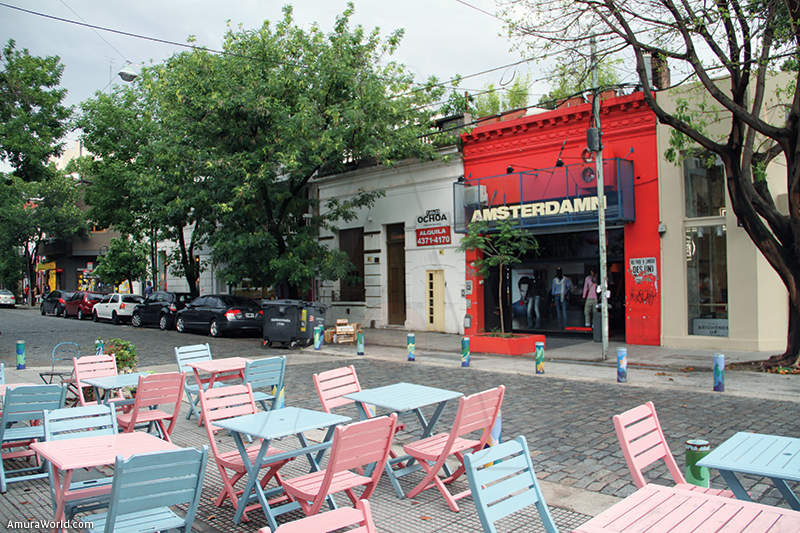 We enjoyed a comforting breakfast and then took a taxi that took us directly to La Boca, where Pedro Mendoza founded the first Buenos Aires in 1536. Later on, when the city was settled in the Plaza de Mayo, it became a barracks neighborhood. In the late nineteenth century, Italian immigrants gave it its current appearance made out of houses painted in different colors, leftover paint from sailors.

Born around 1880, the tango was vulgar music and dance from the suburbs of the capital. It is said that it was born in a small bar of La Boca and it was the music of the first generation of porteños (locals), children of poor European immigrants. Tango expresses the cry, the despair and anxiety, of damned romances, of the dramas of the porteños hard life in Buenos Aires. Gardel was born in France on December 11, 1890 and arrived in Buenos Aires at age 3. That is what history tells, but according to legend he was born in Buenos Aires or Uruguay. He began his career in 1917 and succeeded by his charm and charisma in Latin America, and then he traveled throughout Europe singing and strengthening his popularity which was born, no question about it, in the nation’s capital.

People at La Boca sell paintings and crafts. Shops are full of surprising objects. We discovered metal and cardboard houses and in every corner someone dancing tango or playing the accordion. The atmosphere of this melancholic music overflows especially on weekends. The “Bombonera”, the stadium of Boca Juniors, offers an unforgettable experience on a football game day, where you can see the stadium filled with “hinchas” (fans) with sparklers and firecrackers. The Usina de las Ideas is a cultural center and the home of the Philharmonic Orchestra of Buenos Aires. Through the alleys, colors explode, paper mache figures, bohemian and cheerful atmosphere. 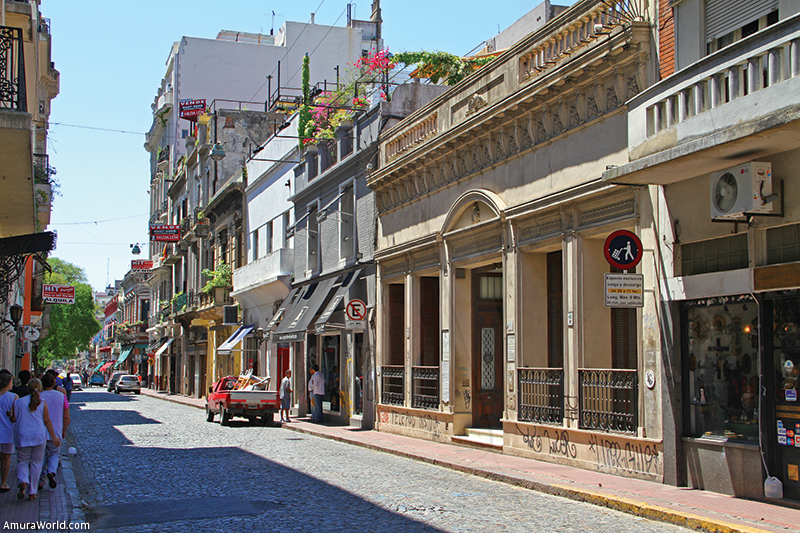 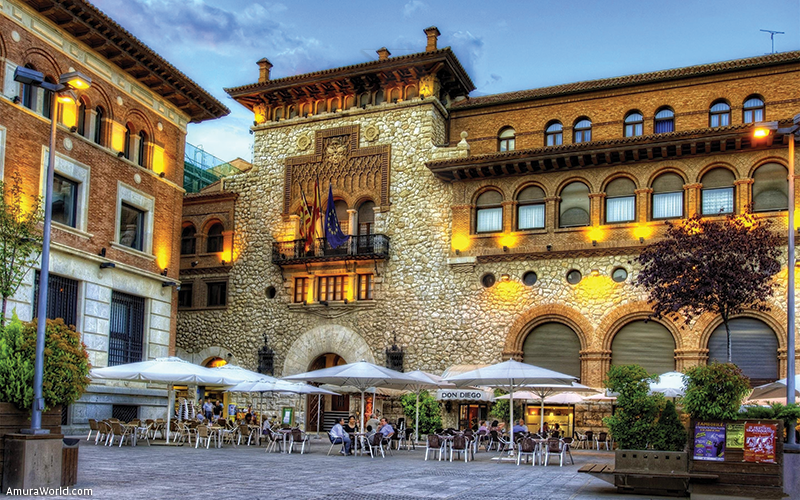 The taxi took us to San Telmo, a bohemian neighborhood where antique shops compete with scrap markets, restaurants and cafes. In the square Borrego the flea market is installed and tango is danced with reverence. We ate at La Brigada (www.labrigada.com.ar) and were able to taste its excellent roast, the sausage and bife (steak). We continued walking. The streets lined with typical Buenos Aires style houses, gives the neighborhood a mood that illuminates every night the tango clubs.

To end the day we went through the Plaza de Mayo, the Casa Rosada and Avenida Corrientes. We attended the theater and then had dinner at La churrasquito, magic kitchen which adds real flavor to the port of Buenos Aires. Patagonian lamb and matambre were the stars. We ended the night drinking a whiskey in 878, a club famous for their whiskey cocktails. We went to the Caix disco (www.caix-ba.com.ar), located across the Rio de la Plata, where we rubbed elbows with the Buenos Aires high society. At 3 in the morning we witnessed how the streets were still very lively, as we returned to Home Sweet Home at the Four Seasons Hotel.

We took our breakfast at the Mistral and then our train to El Tigre, delta of the Lujan Tigre and Parana rivers where there are more than 2,000 km of canals, some with beautiful vacations homes. It is the Venice of Argentina. In its creeks fishing is good and herons know it well. At the Tiger market, fruits, handicrafts and the best parrilladas are sold. In the Rio Paraná de las Palmas rowing competitions are held. Everything seems like a dream that conveys peace, away from the noise and agitation of the city. 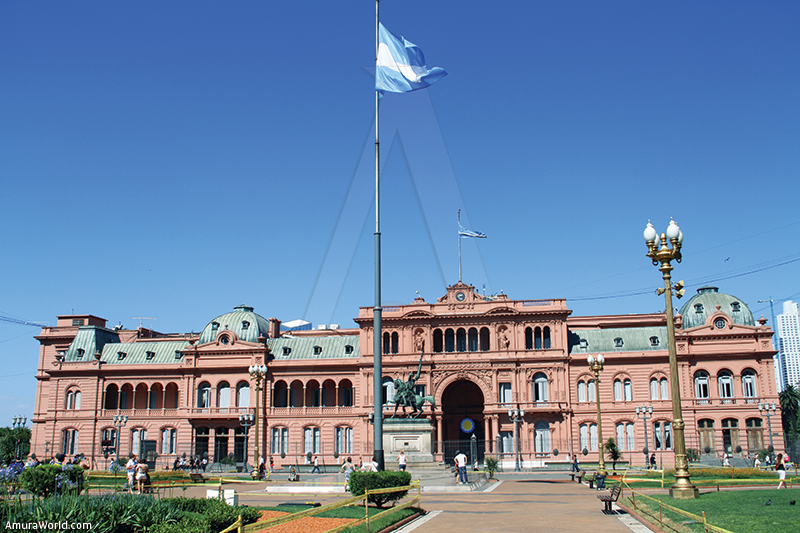 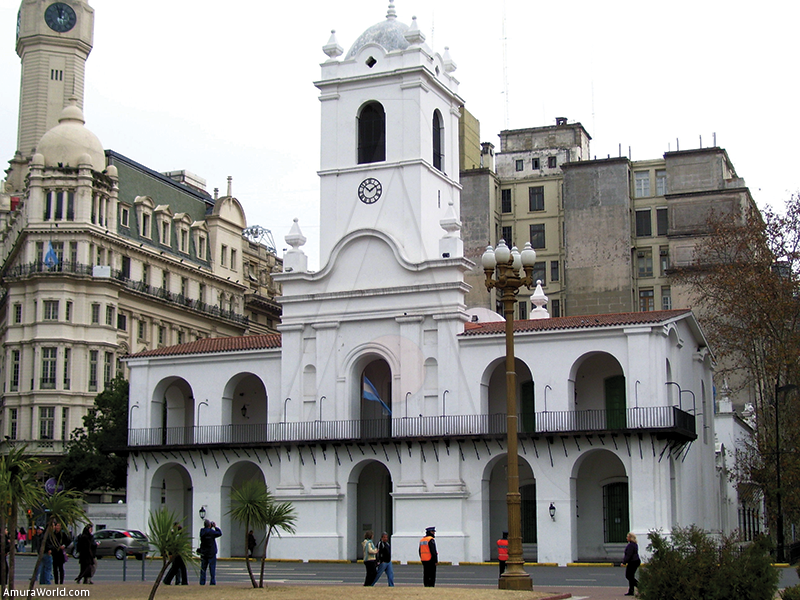 On a nice boat tour, we explored charming canals. We crossed the Parana Mini, the Paraná Principal and the Paraná Guazú. We arrived at the mouth of the Uruguay River, which leads into the Rio de la Plata long after it has created the wonderful Iguazu waterfalls.

Nearby is the Carmelo Four Seasons in Uruguay. It has an 18-hole golf course, a relaxing spa, tennis, beach, pool and peace. We enjoyed the spring weather along with succulent roasts and shared with the locals the way Sunday is spent here, talking.  At the end of the afternoon we returned to the city in time to visit the museum Larreta and its Goya exhibit, and ended up in the Museo de Arte Hipanoamericano (Spanish American Art Museum) and then returned to the hotel and enjoy a massage at the Spa to recover  from walking.

Renewed by that special moment, we settled for dinner at Le Mistral (www.fourseasons.com/buenosaires/) to enjoy the casual and sophisticated atmosphere that this Argentinian bistro has, its typical cuisine and its best wines. We could not resist, after that great dinner, and we fulfilled our desire to see and hear more and more tangos.

The sun and the fresh air greeted us as we were to take the Buquebús at the port. In an hour, we were at Colonia del Sacramento, right in front of Buenos Aires, in Uruguay. It was established by the Portuguese Manoel Lobo in 1680. It acquired importance thanks to contraband that circulated as a counterbalance to the commercial monopoly exercised by the Spanish in the region. English products made their way to the Spanish colony in Argentina through dubious exchanges with the Portuguese.

The wall retains the charm of a mysterious past when pirates coming through its door. La calle de los Suspiros (Street of Sighs) recalls the intrigues of the daughters of the merchants in the shadow of the lighthouse. The courtyards of the houses are hidden behind the colonial facades, their Mediterranean vegetation and its fountain. On the banks of the river, fishermen catch some fish, strolling people are talking about football, polo, a good parrillada, or about the old cars in wonderful condition found throughout the country, a true passion for Uruguayans. The cathedral, built in 1680, was altered several times until finally rebuilt in 1842, today; it dominates proudly the Plaza de Armas.

Colonia is a charming town that turns us back in time. We discovered it with pleasure that day, walking, exploring each corner, feeling the story slip through the alleys. In the afternoon we returned to Buenos Aires. We enjoyed a wonderful sight of the sun shining on the Rio de la Plata.

We toured Florida Street to feel the atmosphere of the big city, we strolled  through La Recoleta before having dinner at Gourmet Porteño (Puerto Madero www.gourmetporteno.com.ar) where we enjoyed excellent meats and delicious desserts and, to end the day we went to Rojo Tango (www.rojotangoshow.com), the best tango show in Buenos Aires. It has passion, love, madness and magic. Before going to bed, we had a cocktail in Isabel (www.isabelbar.com), a very relaxing bar with great music and great atmosphere, very popular in Buenos Aires.

Finally we left Buenos Aires with a heart full of tangos, dancing steps that slid to the airport and then go to Iguazu, where we were expected at the Hotel Das Cataratas Orient-Express. Buenos Aires is a jewel of architecture, music and art, with its bohemian atmosphere and its endless conversations with the locals, lovely people. It is a lavish scale in a South America trip, a timeless city that gives a delicious welcome with a tango flavor. 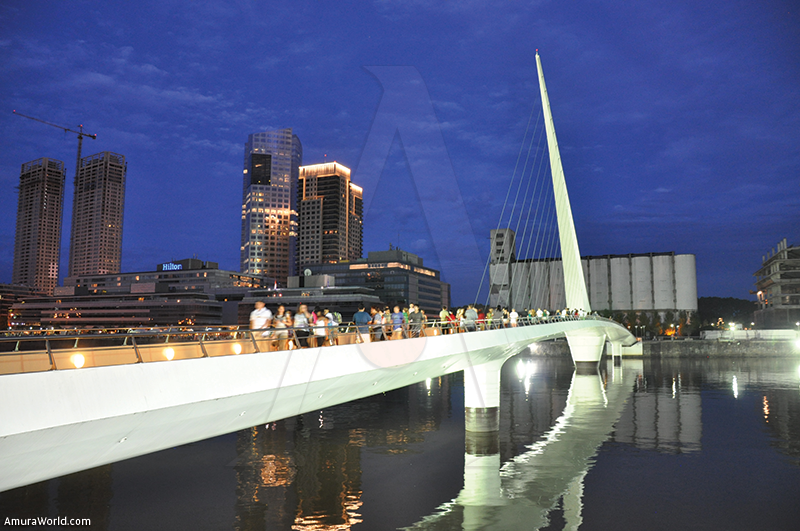