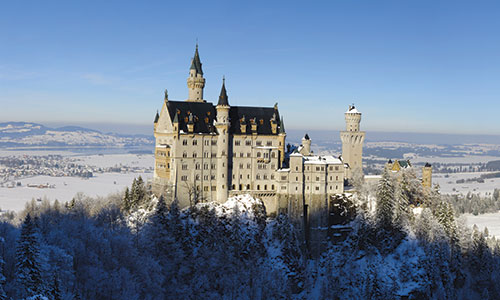 The castle is located in the federal state of Bavaria, near Füssen, Germany, surrounded by the spectacular view of the Bavarian Alps. It was commissioned by Ludwig II of Bavaria in 1866 and it spans 6,000 m2. Its appeal lies not only on the peculiar edifice, but also in its interiors, furnishing, and the works of art in exhibition. Currently, it is one of Germany’s—and the rest of Europe’s—main attractions. During high season, between August and July, the castle welcomes up to 10,000 visitors each day and 1.4 million visitors annually. Rumor has it, the castle inspired Walt Disney’s design of the Sleeping Beauty castle at Disneyland. Guided tours take 30 minutes each, and entrance tickets to the castle can be purchased at the official website (http://www.neuschwanstein.de) two days in advance, or at the ticket booth located in Hohenschwangau at the foot of the mountain.