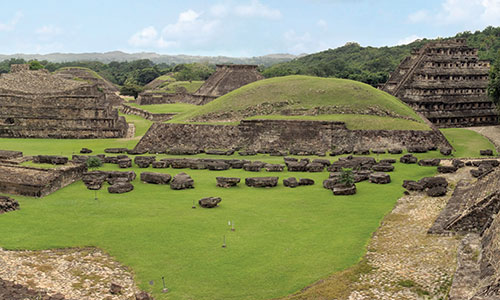 This fascinating political and religious center of the Gulf region was founded in the 4th century B.C. and peaked between 800 and 1200 B.C.; it is, of course, the archaeological area of El Tajin, the city of thunder. It is located in the north of Veracruz, a state that flourished during the aforementioned years. For centuries, it was covered in vegetation until it was discovered in 1785. It has also been a UNESCO World Heritage Site since 1992, and the Nichos Pyramid serves as the main attraction. Its cultural influence expands across the Gulf region, and it is prominent for its unique Mesoamerican architecture, characterized by deeply elaborate reliefs on its columns and friezes.