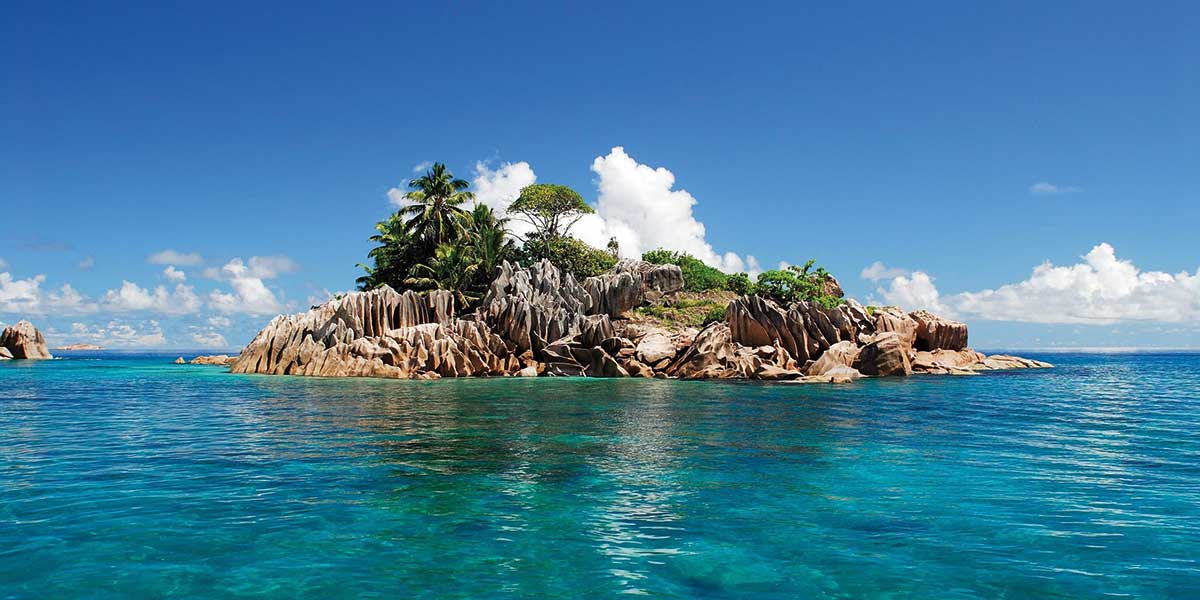 Crystalline waters, a never-ending horizon, and spectacular sunsets”—this description can easily refer to thousands of places in the world, but in this case, the Seychelles Islands are the subject of this portrayal. But, how can this archipelago in the Indian Ocean be any different from other places with the same characteristics? The answer isn’t complicated if we genuinely look back to their history, geography, and culture.

These islands were uninhabited throughout most of their recorded history. The first data of human occupation reported that, in the 16th century, sailors from different parts of the world used to cruise through the islands. Nowadays, the archipelago’s 115 islands host thousands of tourists every year. Their natural beauty and friendly residents make this paradise a hotspot for sailing and aquatic activities. The islands are divided in two: the Inner Island Group and the Outer Island Group. Mahé, Praslin, and La Digue islands stand proud as the center of this natural paradise at just about 420 kilometers (260 miles) from continental Africa.

The English empire arrived to these virgin islands in the fourth voyage of the British East India Company. The islands then became a common passing point for pirates that traveled from Asia to Africa and vice-versa, until 1756, when the first Stone of Possession was laid in Mahé Island by the French. The name Seychelles was chosen in honor of Jean Moreau de Séchelles, Louis XV's Minister of Finance. In 1810, Britain took sole control over the islands, and they became a Crown Colony. They stayed under the rule of the British Empire until 1976 when they became independent and took the name of Republic of Seychelles. 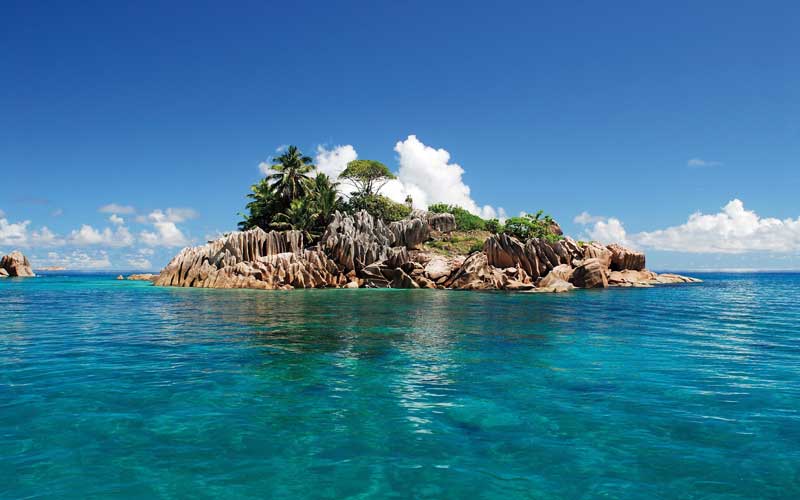 A Paradise in the Indian Ocean

The Seychelles Islands stand as one of the smallest countries in the world, and all of the 115 islands—plenty of them uninhabited—harbor lush tropical flora and fauna, making them a destination full of places to explore. The islands enjoy a very warm climate, classified as tropical rainforest. The capital, Victoria, is situated in the Mahé Island, the largest one. The main three islands are 1100 kilometers (700 miles) northeast from Madagascar, and 1600 kilometers (1000 miles) east of Kenya.

Since the dawn of time, these islands were the home of thousands of species. By the end of the 1700s, the human population started to explore and settle here, causing the extinction of hundreds of unique creatures due to recreational hunting and deforestation, causing the loss of their natural habitat. Despite these unfortunate events, the islands still house hundreds of species. In recent years, two leading organizations were created to encourage and safeguard the most endangered wildlife. Birdlife International and the Island Conservation Society play a fundamental role in the conservation of the biodiversity of the island. 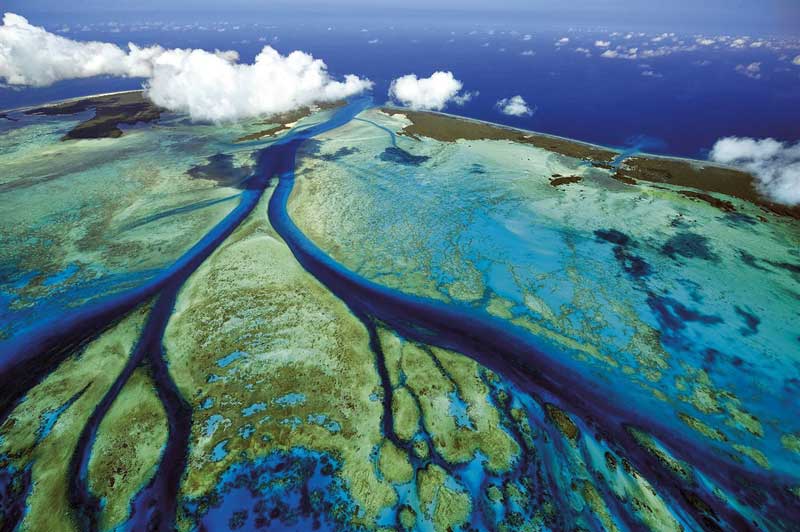 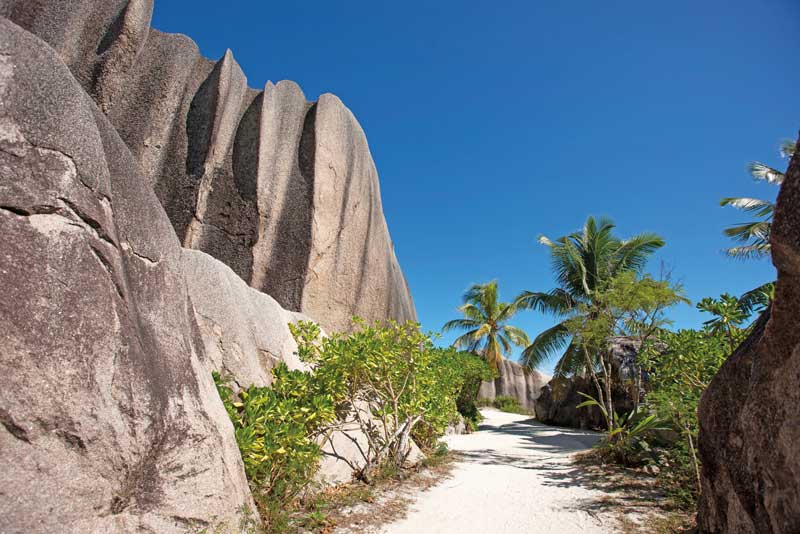 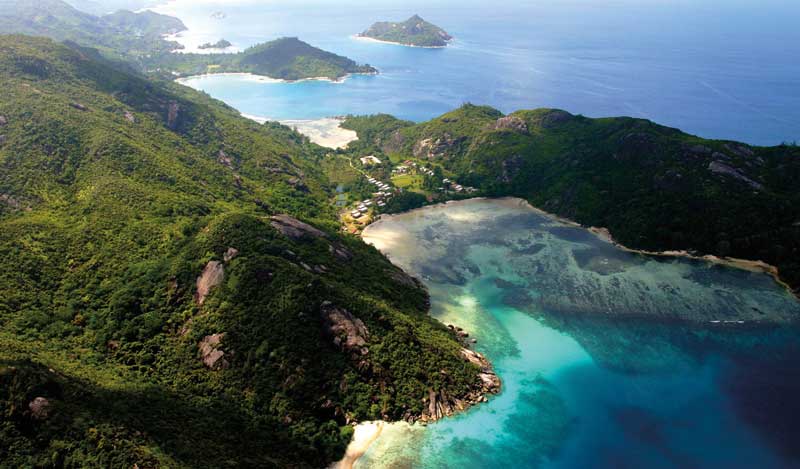 Since these islands were inhabited until the mid-18th century, their culture is a mix of French and British tradition. Through most of the inhabited parts of the islands, we can see the French influence in their architecture and cuisine. The official languages are Creole, French, and English. France had an enormous impact on the Islands culture and traditions, but they weren’t the only ones bringing all the traditions. Their music and dance are profoundly influenced by African culture, and their native cuisine has many traces of Asian heritage. French colonists and black slaves were the first to arrive, along with French deportees in the 19th century. Later on, Asians from India, Malaysia, and China arrived to the islands, creating a riveting and diverse culture. 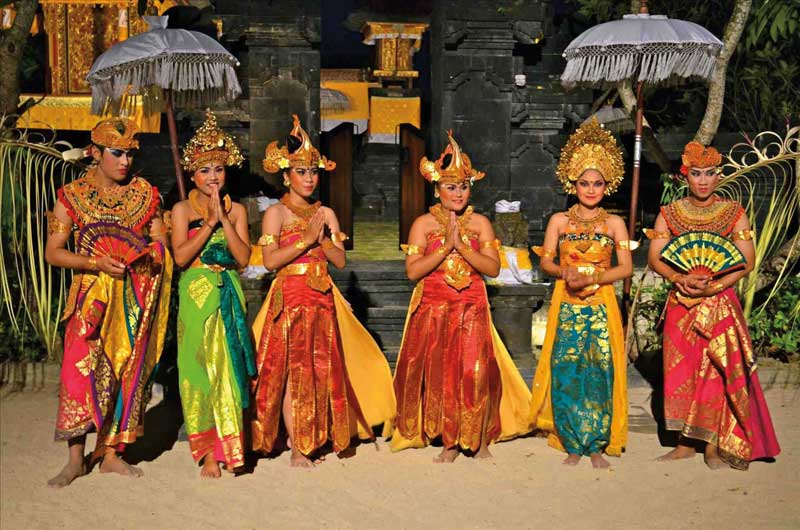 An Undiscovered World of Experiences

In 1971 the Seychelles International Airport was created with one purpose in mind: to attract tourists. Tourism has become the islands’ primary economy. Multiple incentives were given to real estate projects to increase the growth of this industry, but because the islands depend solely on tourism, in recent years, the government decided to promote the development of small-scale manufacturing, fishing, and farming.

Anse Intendance is one of Mahé's most beautiful beaches. This small and secluded crescent of sand on the island's south coast is a favorite surfing spot thanks to its frequent big swells. The lack of a protective reef makes swimming a little rough when trade winds blow from the southeast, but sunbathers, beachcombers, and photographers will enjoy this picturesque, palm-framed strand at any time of year. Additionally, turtles nest along the white shores. Likewise, on Praslin Island’s north shore, Anse Lazio (Chevalier Bay) is one of the island's most picturesque beaches. You have to hike over a hill to access the beach, but it's worth the effort. Flanked by rounded granite boulders, this long stretch of soft white sand merges with crystal clear waters in dreamy shades of blue. 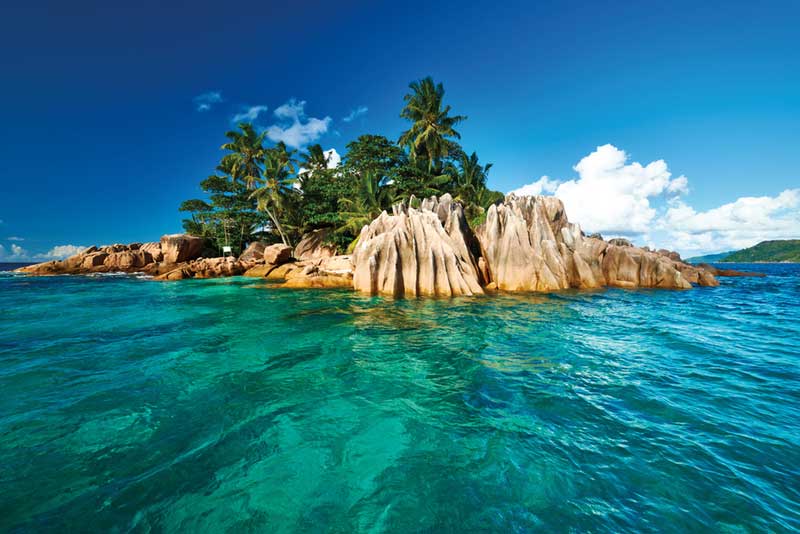 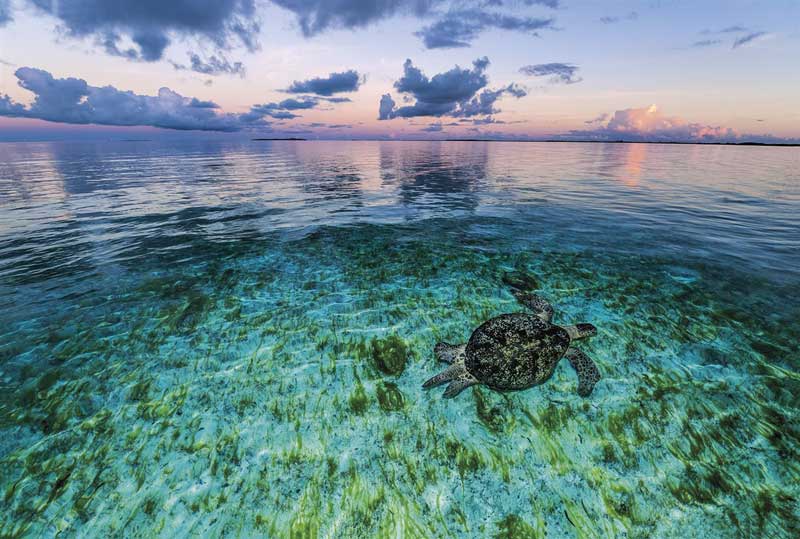 For a closer encounter with nature, the largest national park in the Seychelles, Morne Seychellois National Park—spanning more than 20 percent of the area of Mahé—is a haven for nature lovers and hikers. Within its lush borders lies the mountain range named after its highest point: Morne Seychellois, which reaches a height of 905 meters and overlooks the capital of Victoria. Hiking trails ascend into the park from the village of Danzil, passing tea plantations and offering spectacular views of the southwest coast of Mahé. The moderate Morne Blanc hike is one of the most popular trails and offers magnificent views from its summit. Walking west through the park, hikers will reach the Baie Ternay and Port Launay Marine Parks. To the northwest lies the hamlet of Bel Ombre and the isolated beach at Anse Major.

Another natural beauty is the Vallée de Mai National Park, a UNESCO World Heritage Site, on the island of Praslin; it preserves a prehistoric forest that houses at least 4,000 specimens of the rare giant coco de mer fruit palm (unique to the Seychelles). Other plants here include vanilla orchids, palmiste, latanier, traveler's palm, and Chinese fans. Nature lovers, birders, and photographers will enjoy exploring this reserve, where the trees form an overhead canopy, and large prehistoric boulders are strewn across the forest floor. The valley is home to many species of lizards and rare birds such as the Seychelles bulbul; fruit pigeon; and the national bird of the Seychelles, the black parrot. Hiring a guide is highly recommended, so you can learn interesting details about the plants and animals. 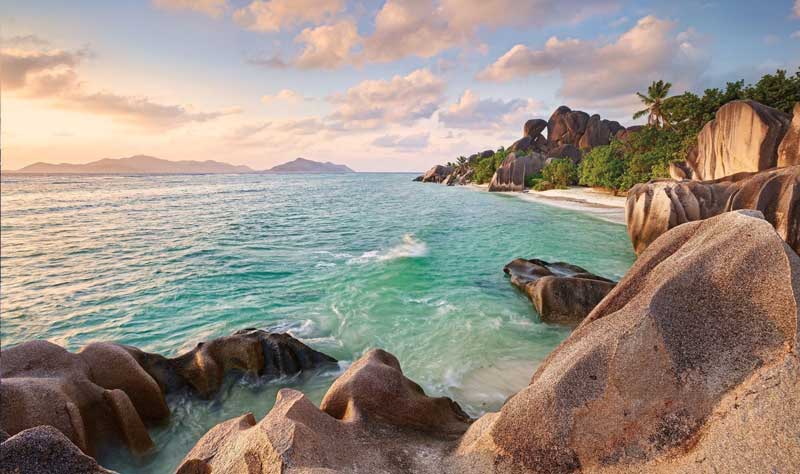 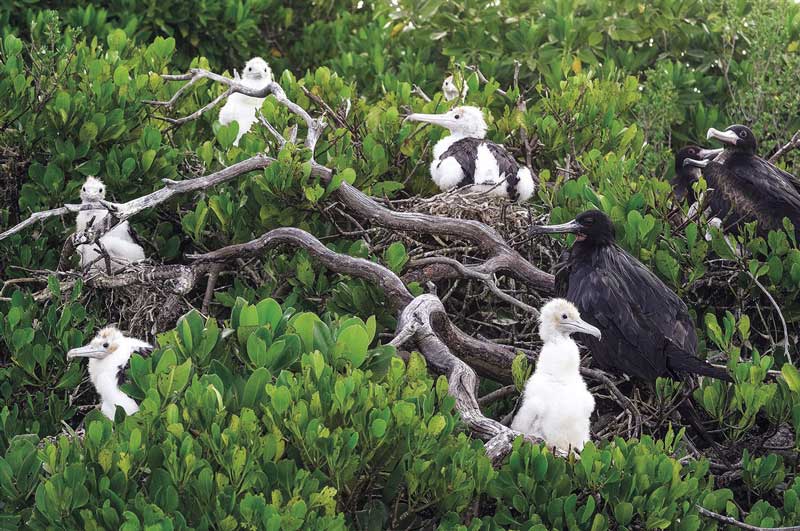 The Sainte Anne National Marine Park—encompassing six islands—is only a 15-to-20 minute boat ride off the coast of Mahé near Victoria. It became the first national park in the Indian Ocean in 1973. Snorkeling, scuba diving, and glass-bottom boat excursions reveal the rich diversity of marine life in the park's coral reefs, and you can explore most of the islands within the reserve through available tours from Mahé.

Another highlight is Bird Island, over a 100 km north of Mahé; it was once known as Îles aux Vaches due to the dugongs (sea cows) in the area. Here, you’ll find a population of migratory sooty terns, which reaches 1,500,000 birds during the May to October breeding season. Visitors can climb raised observation platforms for clear views of the nests. Other species on the island include fairy and noddy terns, cardinals, ground doves, mynas, crested terns, and plovers. Giant land tortoises are also in residence. 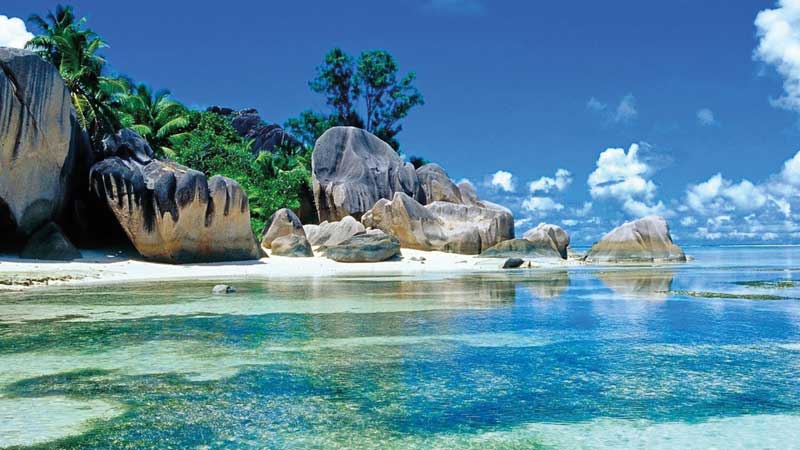 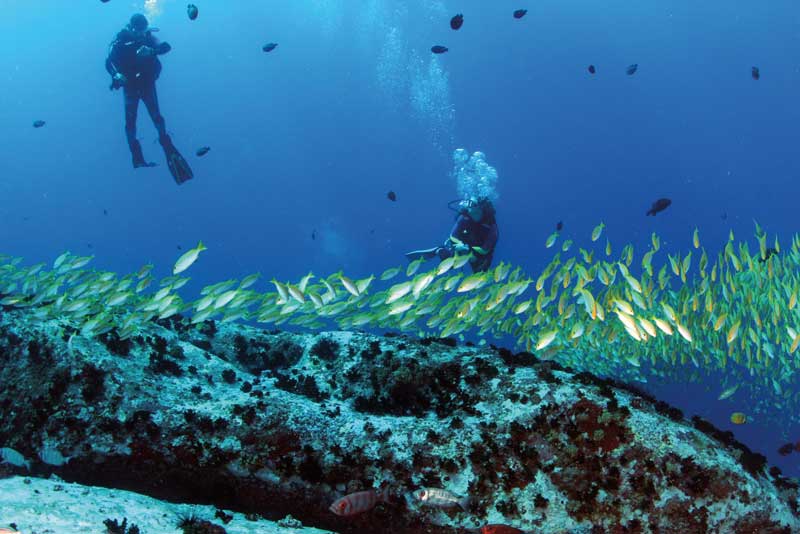 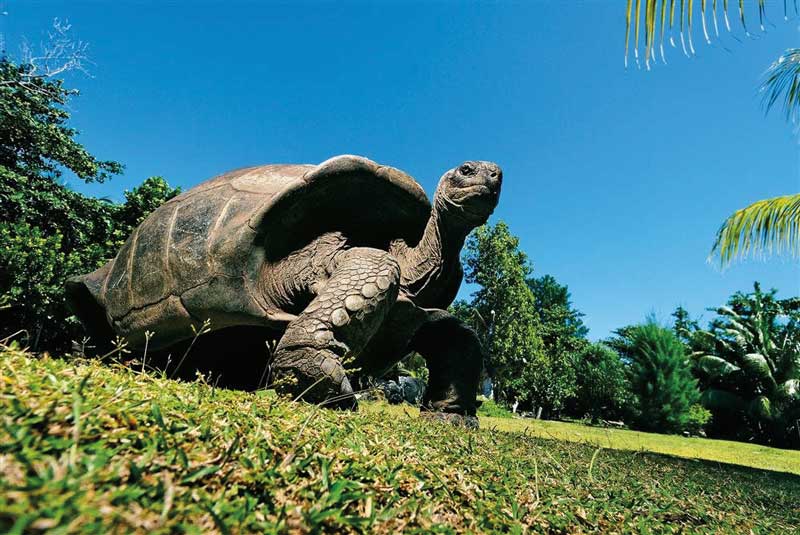 Right next to Praslin Island we find La Digue, the fourth largest island in the archipelago—a haven for nature lovers and those seeking a glimpse of traditional island life; bicycles and oxcarts are popular modes of transport. Nearby, Curieuse Island is now home to a breeding program for giant tortoises, which roam freely around the sandy coves. Curieuse Island is accessible by boat tours from Praslin Island. On the northeast coast of Praslin, Anse Volbert (also known as Côte d'Or) is one of the island's most popular beaches. Warm, shallow water laps the sun-bleached sands, and coral reefs beckon just offshore.

The Seychelles Islands have the perfect balance between luxury and wilderness. The islands offer dozens of high-end resorts and villas with top-class amenities including a selection of safaris in the continent. The islands are also an excellent option for those sailing or yacht enthusiasts. The Seychelles are a paradise where you can spend a couple of weeks relaxing in utmost comfort.