Wrapped in the swirlof the great capital

Arriving by air to Charles de Gaulle, to a taxi, from the highway to the hotel, the whirlwind begins and forces us t olive a more intense life during our short stay in Paris. To stay in the Four Seasons George V (www.fourseasons.com/paris/) , Le Meurice (www.lemeurice.com), Le Bristol (www.lebristolparis.com), the Plaza Athénée (www.plaza-athenee-paris.com), the recently opened and sumptuous Shangri-la (www.shangri-la.com),  the Napoleon (www.hotelnapoleonparis.com), or the Victoria Palace (www.victoriapalace.com), is always a tough decision to make and live the experience of being inside these grand palaces and to live a great adventure.

To walk is the secret of being in Paris, to look at the avenues, observe the buildings, admire the monuments, visit the museums, and get lost in the shops. 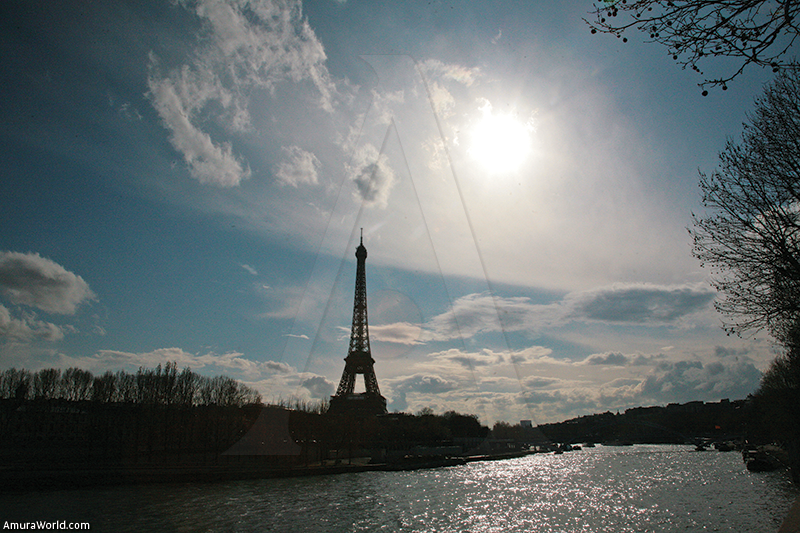 Arriving at midday, we found lodgings at the George V, where the luxury embraces us with elegance. We walked into the streets, strolling through Champs Elysées, the grand avenue that goes all the way up the arch of triumph with distinction and garb, adorned with the best shops and we entered into Louis Vuitton to see the latest collection. We followed the road and found adventure on Faubourg Saint Honoré street to discover Cardin, Praha, and we followed with Montaigne street following the Dior shop windows, and Channel, as well. It was an elegant walk filled with great names, comparing desire, realizing dreams.

By sunset, we were strolling through the Tuileries gardens and walking through the rue de Rivoli when we decided to have dinner at Bofinger, 5-7 rue de la Bastille (www.bofingerparis.com), this towering brasserie whose décor conserve the outfits of the Belle Epoque and where we tasted the exquisite “Fruits de mer”, meaning, a fountain of shrimp and a delicious Choucroute and the finest sausages and cold cuts.

Since we were at the Bastille neighborhood, we went to have a drink at the La Fabrica, a fashionable place where elegant people go; we passed the Sans Sons, with it refined ambience – much entertaining – and ended at the Barrio Latino nightclub to dance at the tune of fine Latin American music. For those who are rather daring, it is possible to end the night at La Luna, a very special place that closes at 9 in the morning. 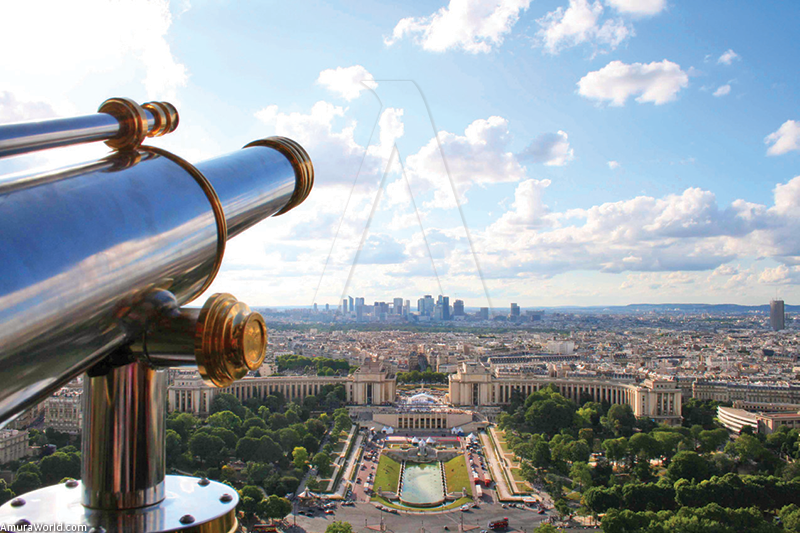 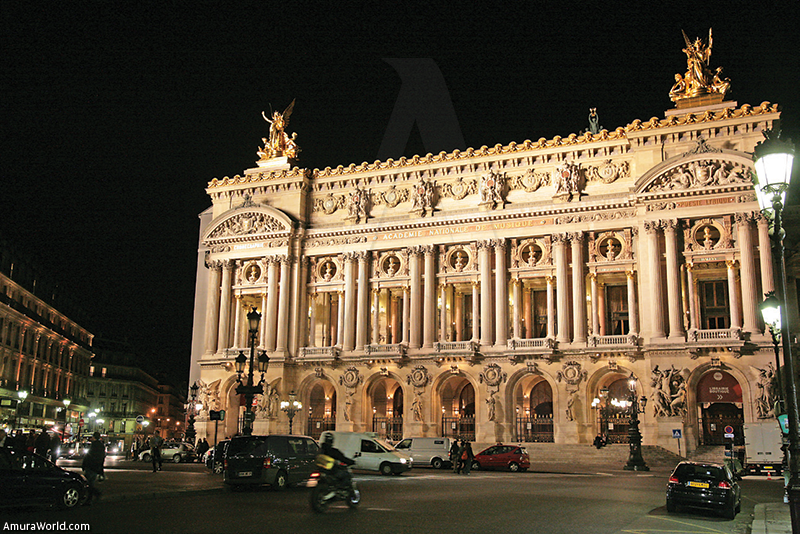 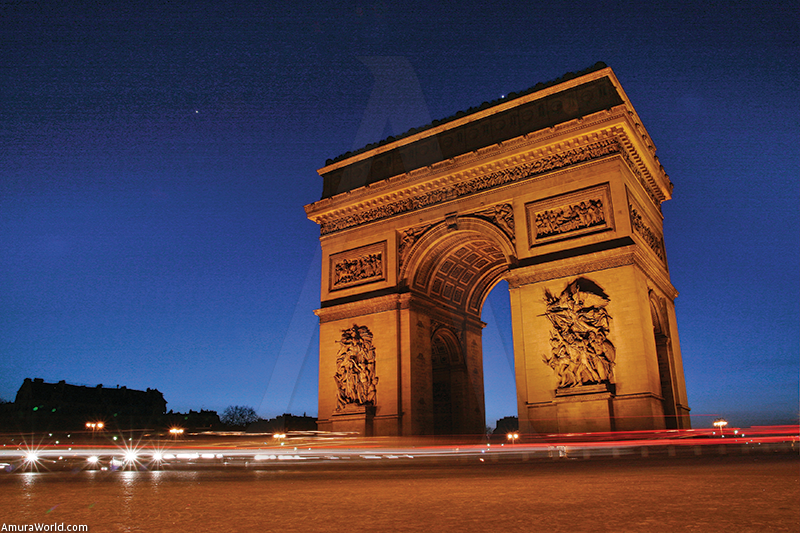 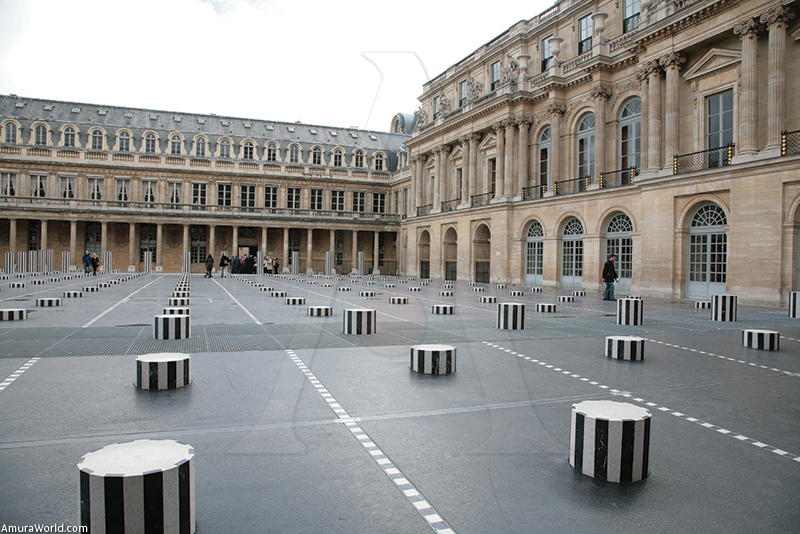 To awake in Paris is to wake up with the flavour of an exquisite croissant with butter or a pain au chocolat, enjoying a coffee, reading “Le Monde”, or discovering at the “Pariscope” the best theatrical productions. We walked out to stroll at the shores of the Seine River until we reached the Eifel Tower, and we visited the new Quai Branly museum (www.quaibranly.fr) with its integrated plant mural and it futuristic interior.

We allowed ourselves to be carried away by the impressive exposition about primitive masks from Nepal and the newly inaugurated exposition “La Fabrique des Images” which reveals the great visions of the world: totemism, naturalism, animist, analogism, through over 160 works and objects from 5 continents. The sun shined and illuminated the sumptuous Alexandre III Bridge where beautiful statues stand and then made our way to the obelisk and the fountains of the Place de la Concorde. We then had lunch at Le Meurice, 228 rue de Rivoli (www.lemeurice.com) in the recently decorated hotel featuring art by Philippe Starck, enjoying the excellent cuisine prepared by Yannick Alléno.

We then walked through le Louvre des Antiquaries to admire the marvellous antiques they sell there and we ended up purchasing a Gallé cup. We ended our journey that day walking through the Ópera Avenue, admiring the beautiful opera building and we could not resist to go to the Galleries Lafayette.

Finally, we strolled through the Grand Boulevard, discovering the legendary music hall L’Olympia where famous rock bands have played there for the last 50 years. It was the Parisians favourite walk at the time of the Belle Époque, when Maupassants novels were the rage, and we felt as if we were walking in one of his novels. We then installed ourselves at the coffee house of the Fauchon store, 30 place de la Madeleine (www.fauchon.com) to enjoy the Sévruga caviar from Kazakhstan, finishing with a Mont Blanc with cassis. Fauchon is a legendary gourmet store that offers the finest products. When we were done, we had a few drinks at Café Oz in the 8 Boulevard Montmarte (www.cafe-oz.com) enjoying a great Australian ambiance. 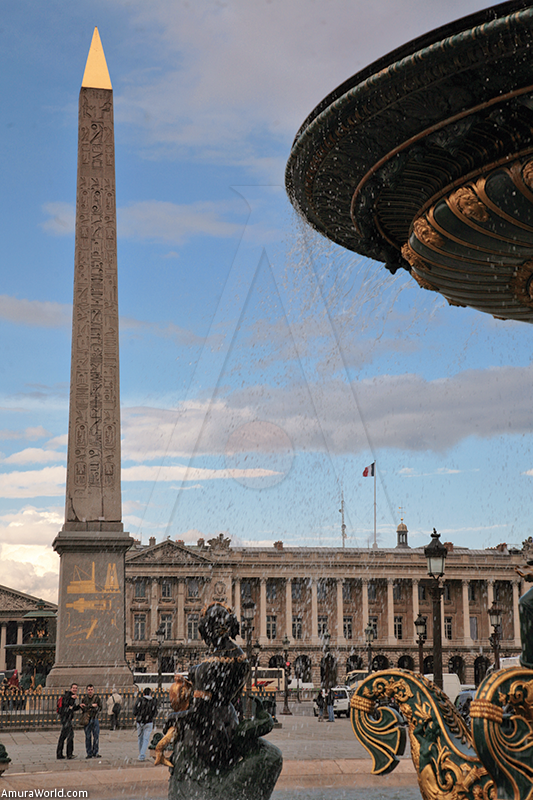 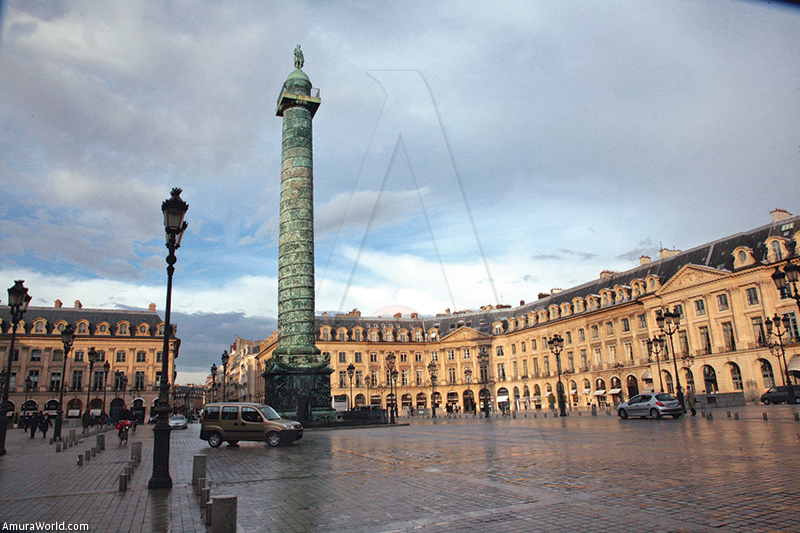 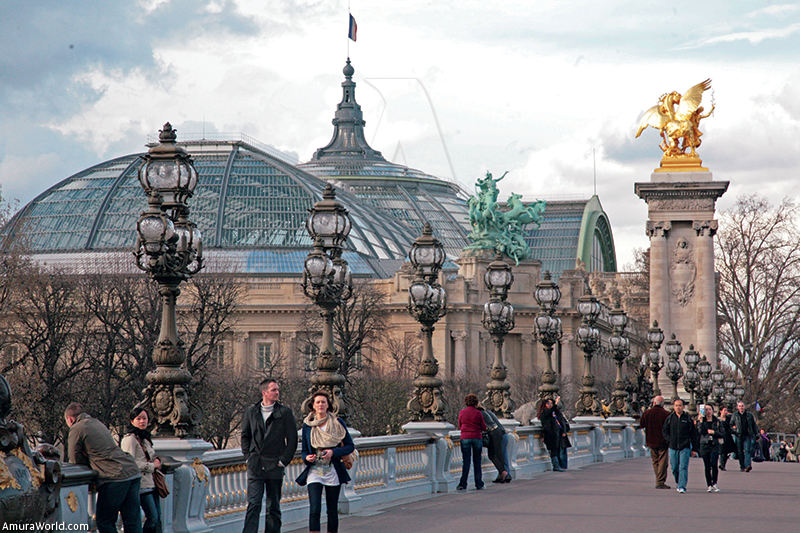 We had breakfast in one of the typical cafes near the George V Avenue to feel the Parisian air, smell the espresso coffee, the taste of the croissant and we then headed to the Lourve (www.lourve.fr) to see the “L’Antiquité Révélée that illustrates the birth of the Neoclassical movement of the 18th century which was rediscovering antiquity. We also enjoyed the fascinating exposition about the sculptor Franz Xaver Messerschmidt and then headed to admire the Gioconda and its eternal smile.

Later in the day, we decided to walk through the Le Marais neighbourhood, starting with the isle of la Cité where Kinf Francia Philippe le Bel burned down the Templars, and one of them, Jacques de Molay, cursed for 13 generations the Kings of France while he died in the fire.

We continued walking through the alleyways of Marais, discovering the opulent Hôtels Particuliers, those mansions that were built when those lands, which used to be an ancient swamp (hence the name) rehabilitated by Templars were confiscated and occupied by beautiful buildings at the start of the 17th century. We started through the  Hôtel de Sens, the Soubisse, d’Almeras, d’Albret, de Coulanges, all luxurious stone mansions and we then made our way to the rue de Rosiers in the middle of a Jewish neighbourhood towards the rue des Francs Bourgeois, visiting the Carnavalet museum and the Picasso museum; strolling through the gardens of the hotel de Sully where a small entrance opened to show us the elegant Place des Vosges where we visited Victor Hugos’ house.

It is a spectacular walk that takes us to discover the fabulous galleries of art, original stores, the gay neighbourhood, the Jewish are with its imposing synagogue, and we ate at the Le Compitor des Mers, 1 rue de Turenne (www.le-comptoir-des-mers.com), one of the finest seafood restaurants that serves superb oysters.

We finished our day dining at the beautiful Bateau mouche les yacht de Paris (www.entreprises.yachtsdeparis.fr), enjoying the wonderful views in movement, admiring the wonderful buildings, the d’Orsay museum at the Eiffel Tower, the grand bridges too as they served us foie gras, the caviar and excellent ribs. We finished the night drinking at the Buddha Bar, at the 8 bis rue Boissy d’Anglas (www.buddha-bar.com). To finish the night, we discovered the magical world that is la Suite, 40 av. George V (www.lasuiteparis.com), were we rubbed shoulders with celebrities such as Beyoncé, Monica Belluci and Javier Bardem, as well as many sport figures. 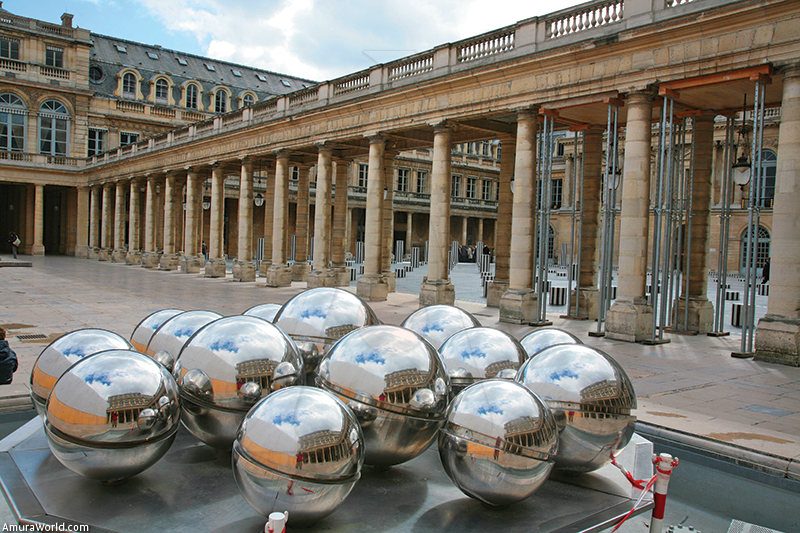 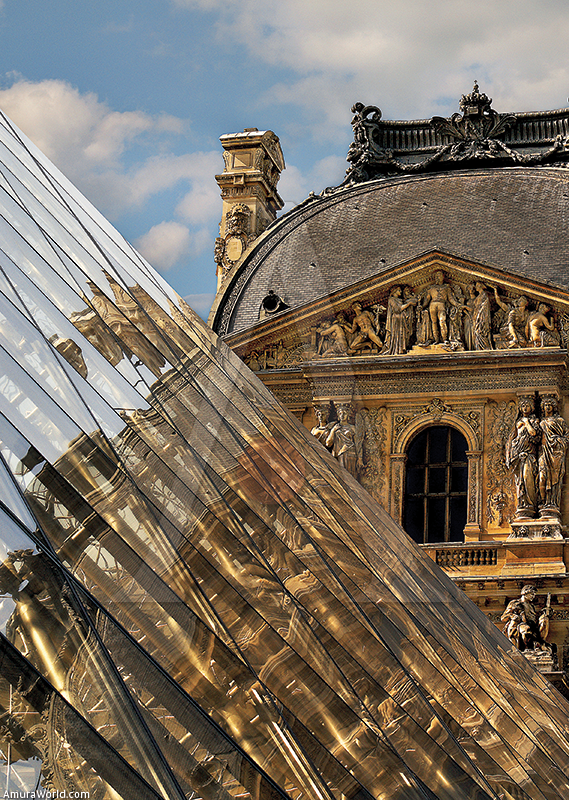 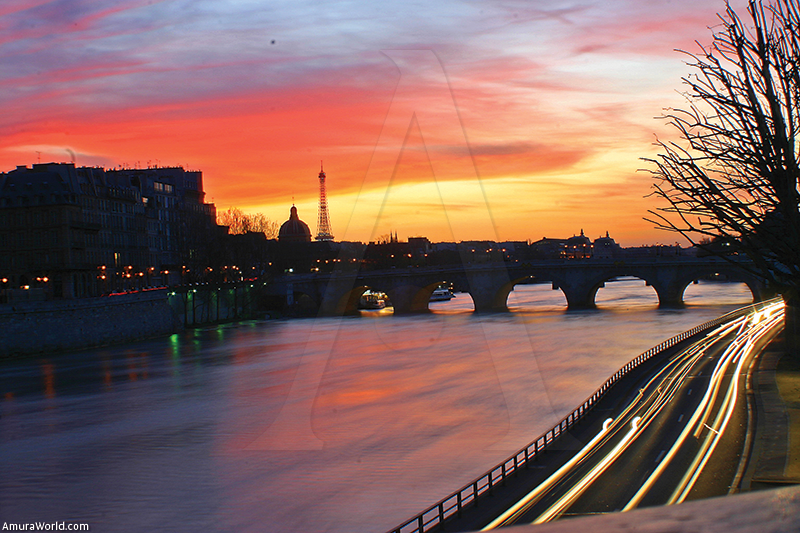 We enjoyed a Parisian breakfast at the cafe de Flore, 172 Boulevard Saint Germain (www.cafedeflore.fr) to feel the atmosphere of the latin neighbourhood, where Apolinaire received friends like Andre Breton and Aragon, when Jean Paul Sartre and Simone de Beauvoir had their table away, when Boris Vian animated the place or when in the avenue the revolution of May 1968 was beginning. We visited the ancient Abbey of Cluny and the Luxembourg gardens, discovered the strange shops on the Rue des Ecoles and visited the Institut du Monde Arabe, 1 Rue des Fosses Saint Bernard (www.imarabe.org) where we admired the museum’s collection that presents chosen and very unique Arab-Muslim art pieces.

After we ate at the Brasserie Lipp, 151 Boulevard Saint Germain (www.groupe-bertrand.com), a true Parisian institution that opened its doors more than 120 years ago, with its famous intellectual and political reputation, and where André Gide, Malraux, Proust, St Exupéry and Camus used to have dinner. While we were enjoying a delicious pate of hare, Jean Paul Gaultier suddenly sited at the next table. La Brasserie is a landmark because of its mahogany facade, its 1900 décor, its Léon Fargues ceramic murals and Charly Garrey ceilings.

We continue to the Sainte Chapelle, that was consecrated in 1248 and houses the relics purchased by King St. Louis. It is a Gothic masterpiece with superb stained glass and a blue ceiling with golden stars. We passed Notre Dame, completed in 1345 after 200 years of construction, square towers rise above his magnificent facade in the middle of the Ile de la Cite. We visited the chapel dedicated to Our Lady of Guadalupe. We ended up in the quai de la Mégisserie where they sell all kinds of plants and animals, always very busy, and opposite the Conciergerie where Marie Antoinette was imprisoned before being executed in 1793.

After a tour through the controversial des Halles neighborhood, where we found very heterogeneous fauna, Giovanni attended the concert in the theater Mirabassi Trio Le Chatelet, Place du Chatelet (www.chatelet-theatre.com), and had dinner at Le Train Bleu located on the first floor of the Gare de Lyon (www.le-train-bleu.com), a traditional restaurant with the original 1901 decor, with beautiful paintings and a Belle Époque atmosphere. It was like dining in a museum, tasting the foie gras cuit maison, the ram gigot in juice and a delicious Baba au rhum. After dinner we were in the mood for a bit of Spanish music and ended up in “La Serena”, 92 rue Richelieu, before ending the evening with a drink in the Monte Cristo, 68 av. Des Champs Elysées (www.montecristoparis.fr) the “Tout Paris”, where we danced, vibrate and see who continues till dawn. 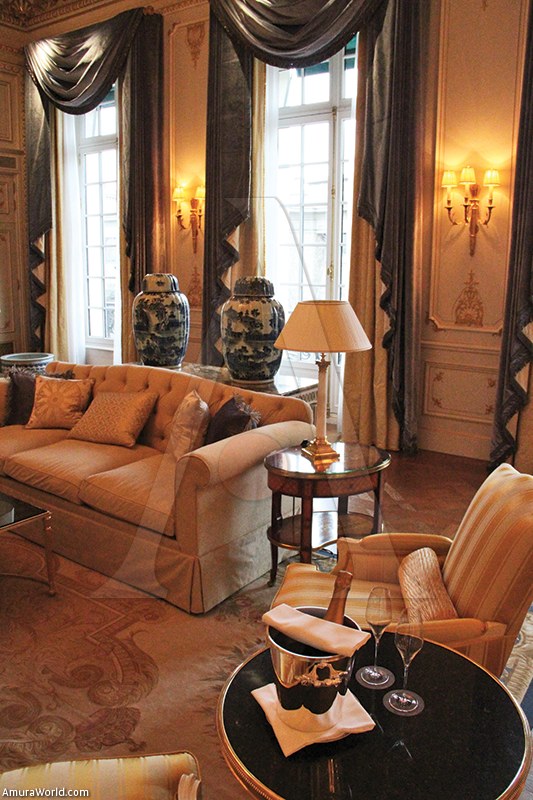 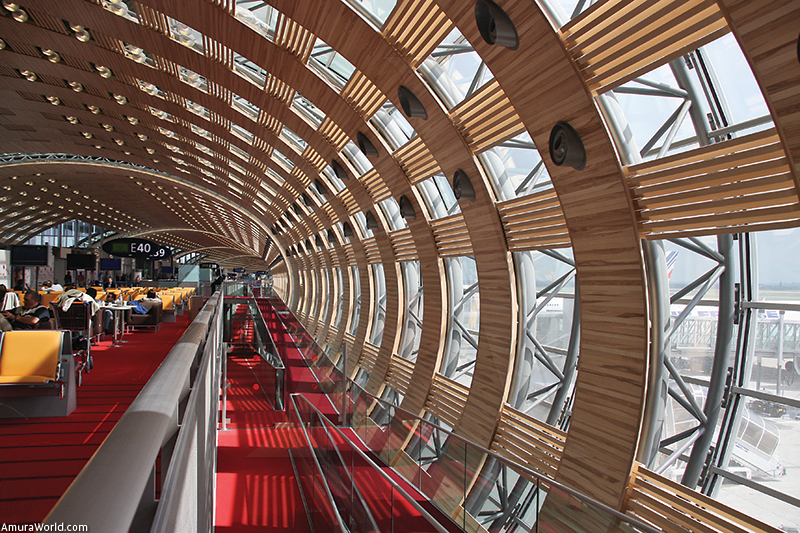 We had breakfast in the luxurious salon at the George V, with its revisited Art Nouveau style, adorned with impressive flowers by the famous Jeff Leatham (www.jeffleatham.com).

We then visited the Musse d’Orsay once more, that ancient train station transformed into the maximum temple of impressionist paintings, rediscovering Monet, Renoir, Gauguin, Cezanne, etc, studying every detail of these extraordinary paintings.

We then visited the Pigale, the red neighbourhood of Paris, with its thrift stores, and then climbed the Montmartre to savour the view, the ambient of the Sacré Coeur, the atmosphere of the place du Tertre, with its painters, cafes for artist, and its stories about la Bohème. Our day ended at the Trocadero to admire the Seine and the Eiffel Tower. We dined at the Le Bristol restaurant, 112 rue du Faubourg Saint-Honoré (www.lebristolparis.com), with its 3 Michelin stars, and where chef Eric Frechon served us some of the most complex creations in the city. All was exquisite, even the pineapple soufflé and the passion fruits.

Although it pains me, I had to say goodbye to Paris, the city that never sleeps, where there is something for everyone, where life joins luxury and debauchery, the entertainment is grand, the cuisine is excellent, and art and clothing of all kinds. Paris is a feast that is enjoyed luxuriously. 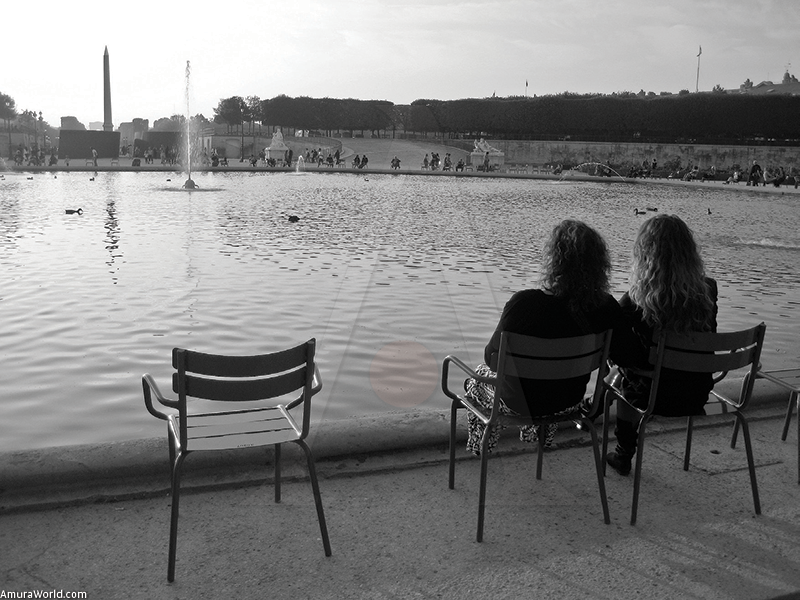 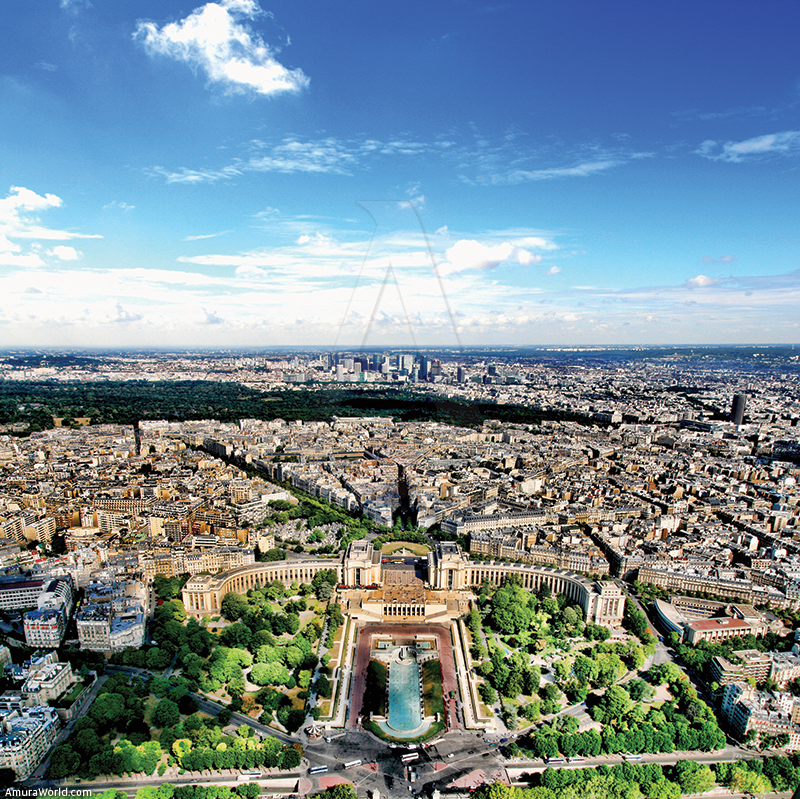