Four fun facts that you should know about Punta del Este 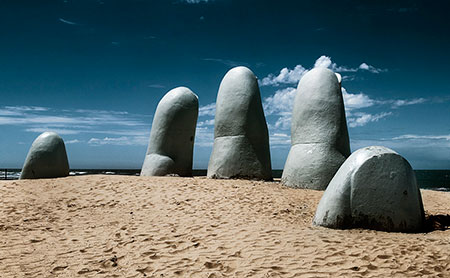 In our most recent edition we have stirred the boat to Punta del Este, this Spa is the most beautiful of Uruguay and it’s important to pinpoint some facts before arriving to this destination.

The Hand,  has been “replicated” in other countries

“Man emerging to life” is the true name of this piece created by the Chilean artist Mario Irarrázabal, which has the shape of a human extremity that emerged from the sands of La Brava, reason why it’s usually known as The Fingers or The Hand. However, few people know that this artist has created similar work in other parts of the world such as: Madrid, Spain; the desert of Atacama in Chile; and Venice, Italy. Punta del Este is the place where this sculpture has become a city icon.

This Uruguayan delicacy was born in the Spa city, specifically at the El Mejillón bar, were Antonio Carbonaro created this sandwich specifically for a diner who asked for a snack with goat meat. when the kitchen was already closed. The effort to satisfy this Cordobese woman gave a very celebrated result, this turned into a classic of the destination and the entire country. It’s creator died in 2003, but the immortal flavour still satisfies locals and foreigners.

Since 1951, the International Film Festival of Punta del Este has been promoted since it’s beginnings by the entrepreneur Mauricio Litman, of Argentine origin. For it’s second edition it has premiers of grand director such as de Ingmar Bergman and Kurosawa.

The first green building on Earth is in Punta del Este

We are talking about a 16 storey building that feeds exclusively of renewable energy through aeolic turbines and solar panels. It was inaugurated in 2013 you will be able to see it at the 3rd stop of La Mansa. The remaining energy generated by this infrastructure is donated to public service.