Without a doubt the Patek Philippe World Time watch represents a masterpiece in the world of watch making and a technical feat for lovers of useful complications. Just by looking at it, one can appreciate its absolute beauty but thanks to its practical functions, it is considered to be a great help because its mechanism allows its proud owner to tell the time in the main capitals of the world with just one simple movement.

The local time shown by the hour and minute hands corresponds to the location that appears in front of the 12 hour index on the city dial. The time is set using the crown in conjunction with the 24-hour dial, which allows the distinction between a.m. and p.m. Changing the time is easy by simply pressing the button located at 10 o’clock. 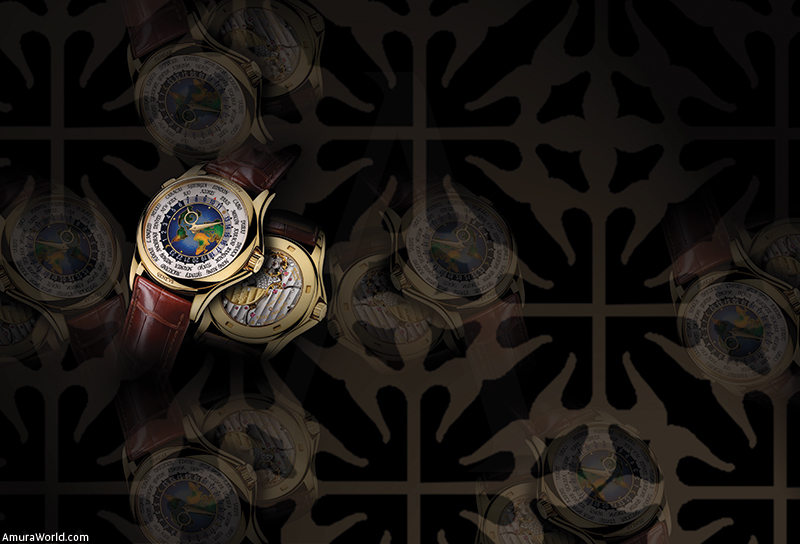 Its mechanism was created by the Geneva watchmaker Louis Cottier at the beginning of the 1930s. Cottier offered his invention to Patek Philippe, who in 1959 obtained the Swiss patent. Later, following Cottier’s second intervention, in which he was able to show two time zones at the same time, he inspired the development of the Calatrava Travel watch in the 1990s.  In 1999, Patek Philippe developed a new patented mechanism, which optimized the Caliber 240 HU (HU stands for Heure Universelle) by disconnecting the world time mechanism, composed of discs of the cities and the 24 hours, from the gear train of the watch. The precision of the caliber and the movement of the minute hand therefore were no longer affected by changing from one time zone to another In 2000, Patek Philippe used this movement to re-launch the World Time in his standard collection, which we can now see that this year’s World Watch Exhibition and at the Baselworld Jewelry Exhibition.

Its spectacular design accompanies 18-carat yellow gold, the enamel cloisonné center is handmade with a motif of the map of the world that represents the rarity of associating a dial with cloionné enamel and the complication of a World Time watch capable of seducing so many art lovers.  Given the complexity of the creation of a cloisonné enamel dial, the annual production of this timepiece will be limited.

These types of watch whose predecessor models reach astronomical prices at international auctions are once again included in the current collection of the Geneva manufacturer.