Unlike its little brother, the Adam A500, the “movie star” in the film Miami Vice, the AdamJet A700 is the serious member of the Adam Aircraft family, converted in every way into a business jet in the Very Light Jets (VD) class.

With a design that attracts the attention because of its double tail, the A700 is a turbofan aircraft that can be configured to carry six, seven or eight passengers.

It has the largest cabin in its class with modular plug-and-play functionality that allows quick adjustment of the seats, a cabinet to prepare food and drinks and an entertainment center.

Clients may opt for a configuration of five seats with a complete bathroom in the tail or opt to eight passengers in and air taxi configurations, which makes maximum use of the space. 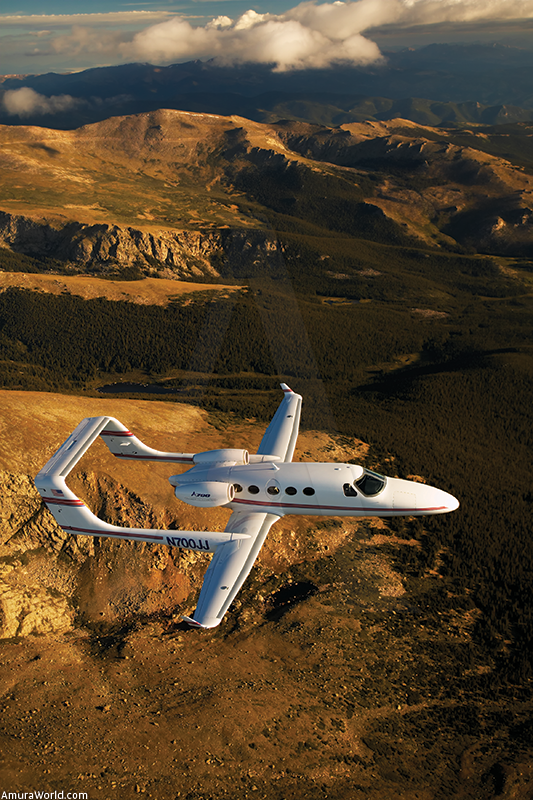 It has an ample luggage hold in the nose cone, with enough space to stow four bags of golf clubs , which can be accessed from the outside or from the inside next of the bathroom.

Its low operating costs and state-of-the-art technology make this model the natural choice of clients or companies looking for their own jet to travel long distances in great comfort. In the certi- fication process, the A700 and seeking approval for compliance with the FAR Part 23 requirements in the United States, including certification for both day and night flying, as well as operation with one pilot, flying in icy conditions and RVSM certification, the latter, which will allow it to use the newly estab- lished air spaces.

The aircraft is also seeking foreign certifica- tions, including the EASA in order to be able to operate in European skies.

The airframe is constructed basically of composite carbon fiber materials. The pressure differential of the cabin will be 8.33 psi, which will give passen- gers the feeling of flying at 8,000 feet even though the aircraft is actually flying at 41,000 feet, which will result in more comfortable flights.

Composite aircraft are tested to higher fatigue tolerance standards than conventional aluminum aircraft. For example, the cabin of the A700, certified to 8.S psi, has been tested to withstand three times that pressure: 24 psi, as compared to 17 psi to which aluminum cabins are subject. This benefits clients because the A700’s additional strength makes it ideal for operations in extreme environments that require high performance.

The fuselage is also built of composite carbon fiber with a monocoque structure consisting of toughened panel layers. Passengers will enter the cabin through a door with an extending stairway located at the front left-hand part of the fuselage. The emergency exits will be located in the central right or left area of the fuselage. 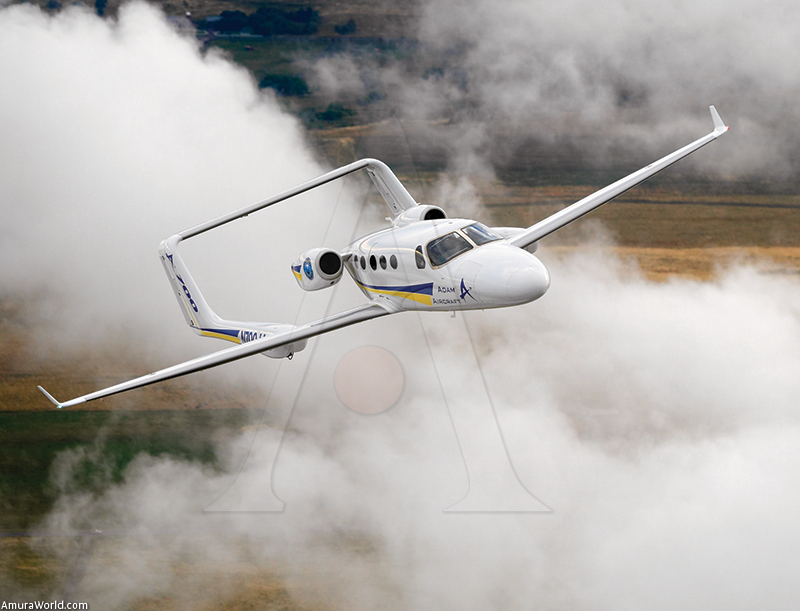 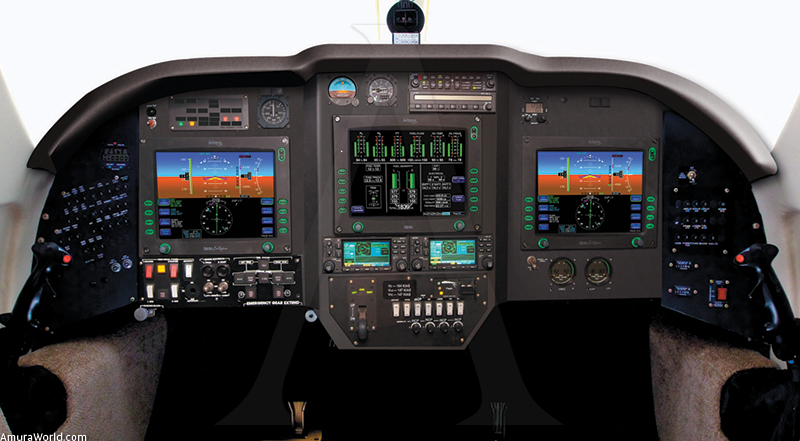 The wings, with a double-separate design include aerial laminates with the latest in aerodynamic design, which comply with and exceed all regulatory resistance and durability requirements. An integrat- ed fuel tank will be incorporated into the wings.

The design of the stabilizer is a combination of the configuration placed on the high tail. The horizontal tail is a fixed-tail design that includes an elevator. The stylized design is achieved by a refined band mounted on the elevators, whereas the balance is provided by a tail mounted in the rudder.

For the flight controls, the sidebar and rudder pedals are connected through an aileron in each wing and an elevator and a pedal in each tail tip. In the same way, hydraulic or disk brakes in the con- tol stick are provided for each crewmember and the flaps are controlled electrically. 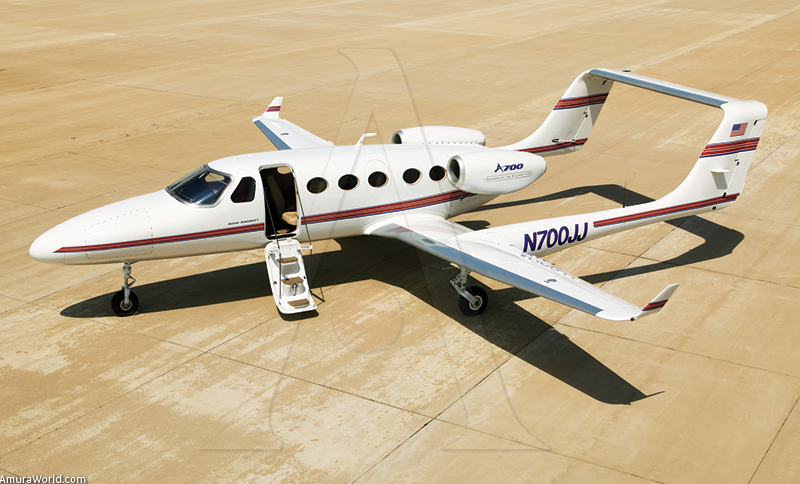 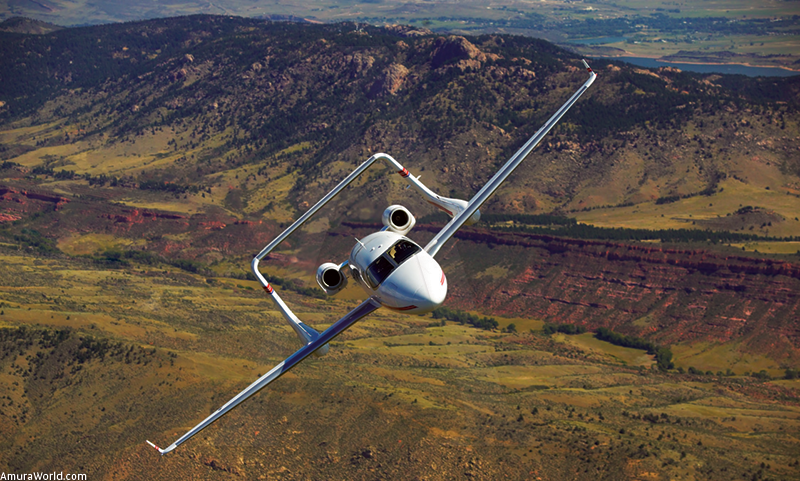 The avionics suite of the AdamJet A700 includes the latest generation LCD displays in the pilot post this cabin with Primary Flight Display (PFD) capacity, which shows altitude, wind speed, vertical speed information, as well as flight con- trols, flight direction command bars, pre-selected heading and altitude. The aircraft also has a Multifunction Display (MDF) capable of providing all navigation information together with the engine instrumentation.

The solid state technology of the Attitude Heading Reference System (AHRS) and the Air Data Computers (ADC) provides information on the position of the aircraft, and a three-axis digital automatic pilot and flight management system are also included.

The aircraft has a retractable landing gear. Each landing gear mechanism is designed for one wheel. The nose mechanism retracts inside the fuselage, whereas the rear landing gear is stored inside the tail extensions. The steering and breaking controls are located in both crew member’s seats with manual mechanisms operated using the rudder pedals. The landing gear of each of the wheels is equipped with disk brakes. 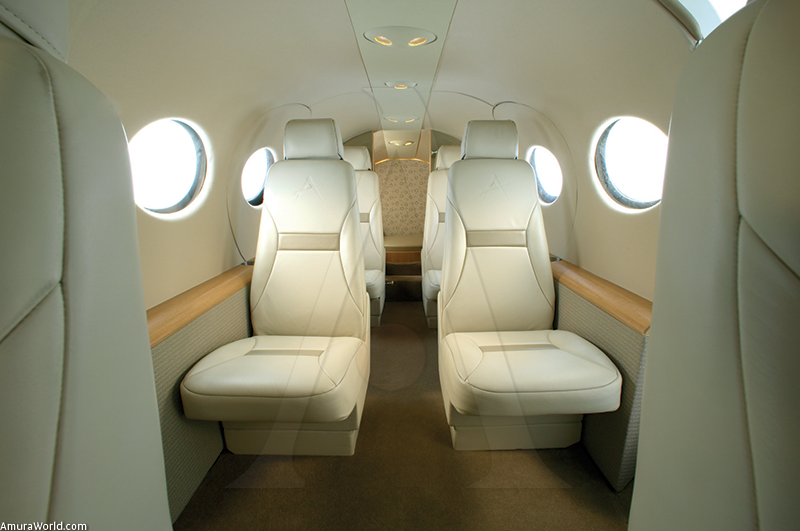 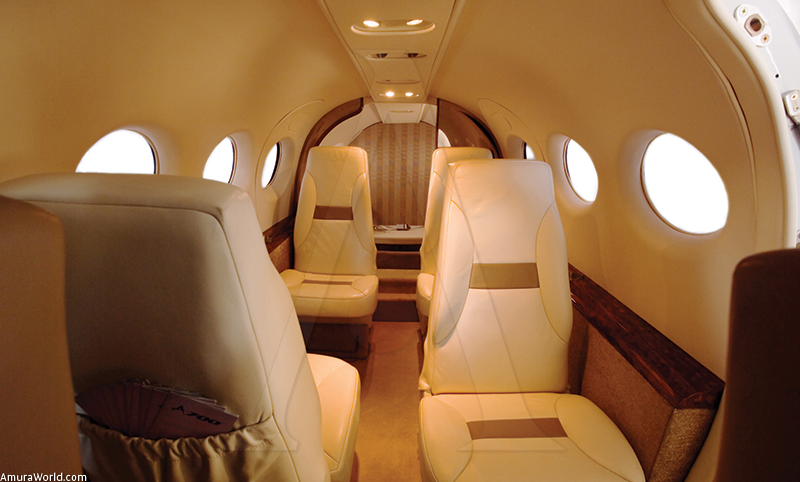