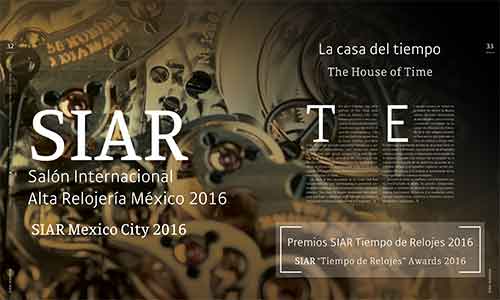 The House of Time

This past October, the 10th edition of the SIAR took place in Mexico City. The event continues to be a success as it expands its sphere of influence in the world of upscale watchmaking. The concept has been mimicked in Paris, London, and New York. The SIAR attracts renowned brands, in a sophisticated environment, and showcases them to collectors and people interested in watchmaking. Over 90 brands, as well as the majority of the leaders of the watchmaking industry, have participated in this event. Further still, some of the most significant product launches on a global scale have been unveiled at SIAR.

In 2016, it was recognized as an event that has transformed the way watchmaking is perceived, understood, exhibited, and consumed in Mexico and Latin America. This year, 39 brands showcased their products, and held conferences with national and international creative directors and master watchmakers. O

Watch of the Year

Boasting pure lines and a combination of simplicity and sophistication, the Signature 1 is a watch that has been manually assembled with three pointers and no tourbillon function. Instead, it features a balanced complication and a gold dial designed exclusively by Greubel Forsey. This unique edition consists of 33 pieces in gold and platinum, as well as 33 pieces in steel. 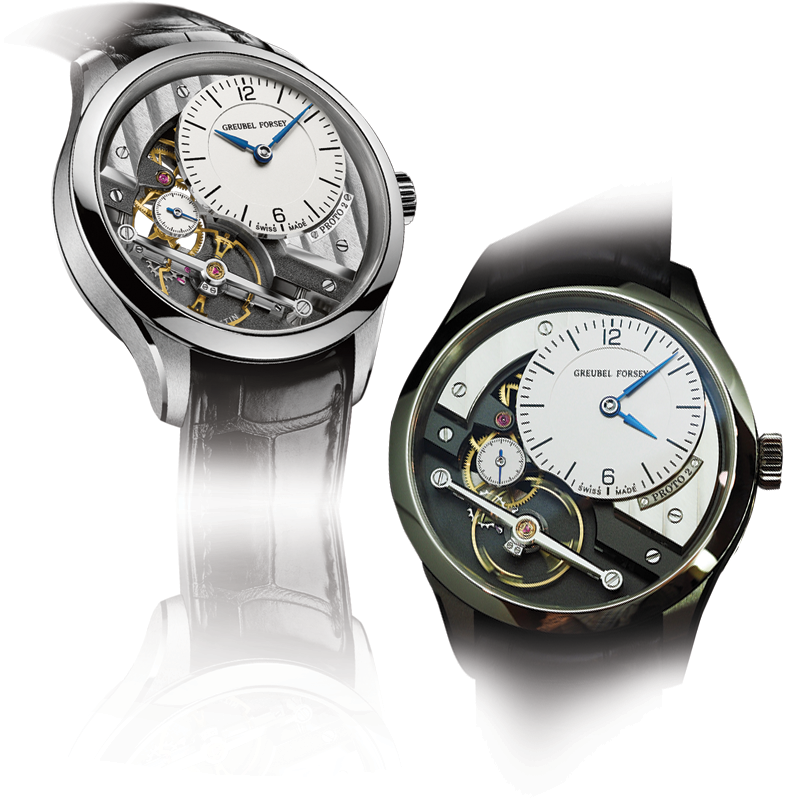 The Royal Oak Double Balance Wheel Openworked watch has a particular skill in solving stabilization issues through a fixed wheel, as well as balance springs that have been assembled on the same axis. This innovative and patented geometry translates into a very complex assembling process; the benefits include greater precision and stability. It comes with a stainless steel case, anti-glare sapphire crystal, bolted crown, and is water-resistant up to 50m. 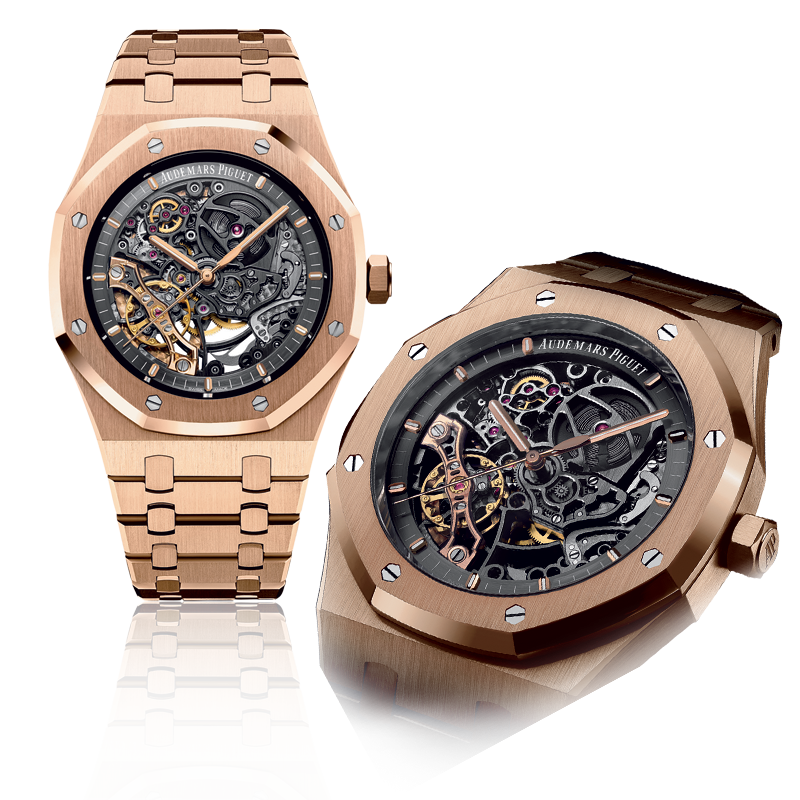 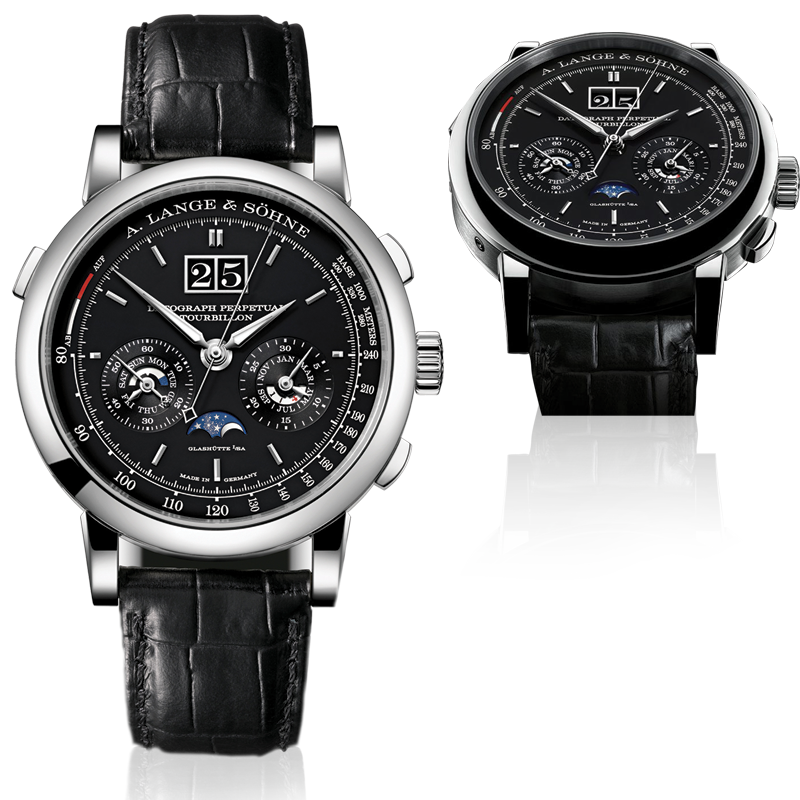 EMC stands for Electrical Motor Control, and its function is to externally adjust the watch with perfect precision between -4 seconds and +6 seconds, something that is usually done by a watchmaker, accessing the inner workings of the watch. Its case is made of untreated grade 5 titanium and steel, and it is 43mm wide. It has water resistance of 30 metres, and an 80-hour power reserve. This model is a limited edition of 15 pieces. 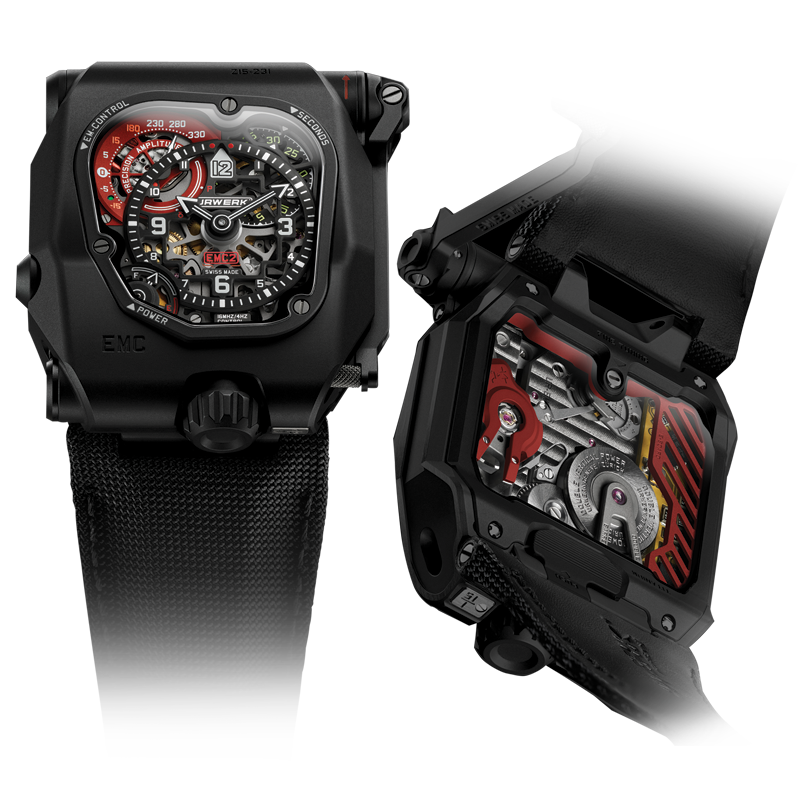 It contains two complications: chronograph and universal time, and features 24-hour time zones. It lacks a seconds hand on the universal time face, yet it does boast a miniscule 30-minute chronograph. Its case is made of white gold, blue sphere, and sapphire crystal with guilloche engraved by hand. 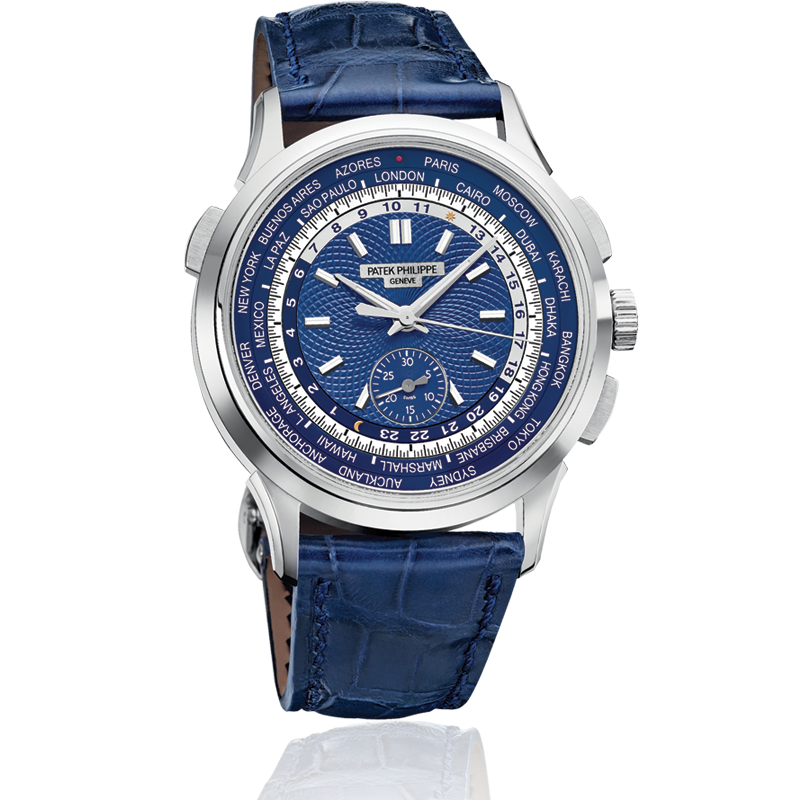 Its eight-second, constant force mechanism guarantees an invariable flow of energy towards the wheel. The central spring is completely charged to the last second of its 36-hour power reserve, making the watch astonishingly precise. It can resist up to 3 atmospheres underwater. The watch is assembled with a 925 Sterling Silver sphere with frosted and satin-grained surfaces. 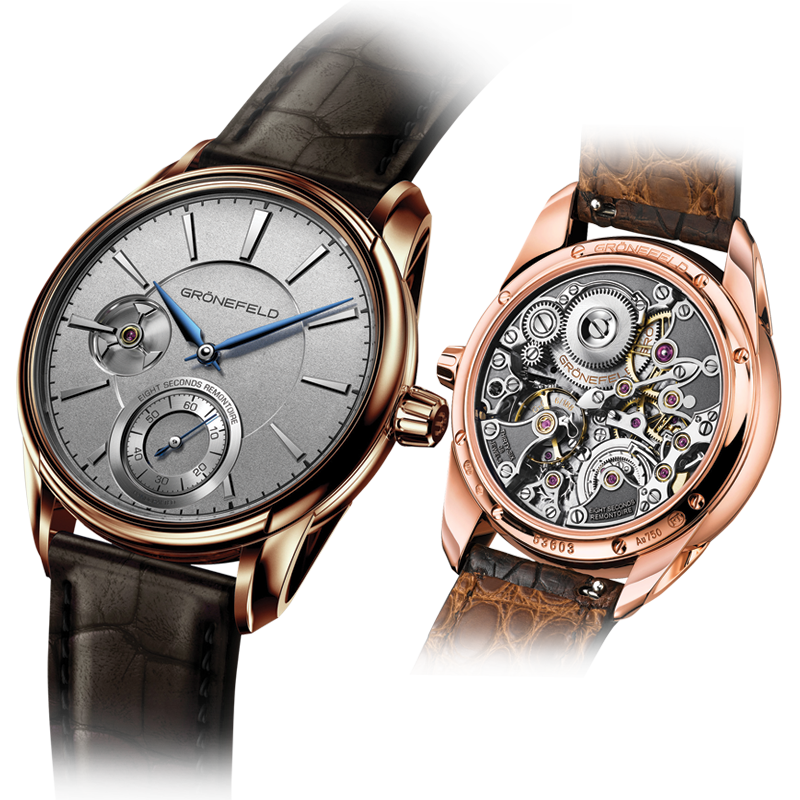 This reedition of the 1976 model designed by Jack Heuer—great-grandson of the late founder of the brand—was made in honor of the world championship racer Niki Lauda. The 2016 edition features the same two key functions: a pulsometer and a tachymeter scale. The cushion-shaped box and the lacquered needles in black and white are reminiscent of the original chronograph. 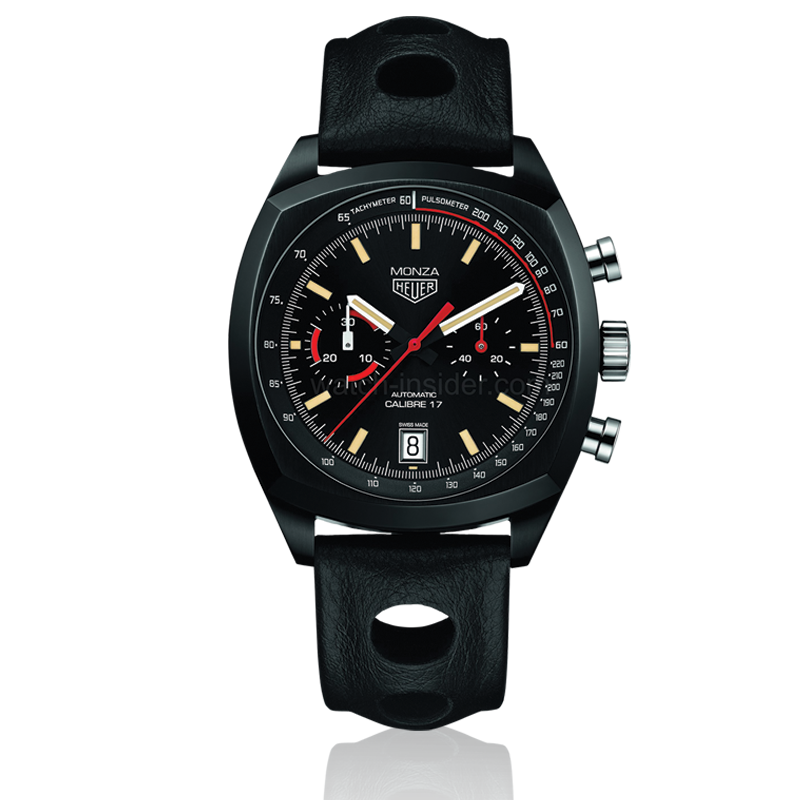 This is a numbered and limited 6-piece edition dedicated to Mexico, inspired by the country’s colors. The miniature figures where crafted entirely by hand on the surface of a mother-of-pearl dial. The lines of the watch are light and pure. It features the Hermès H195 automatic spring. 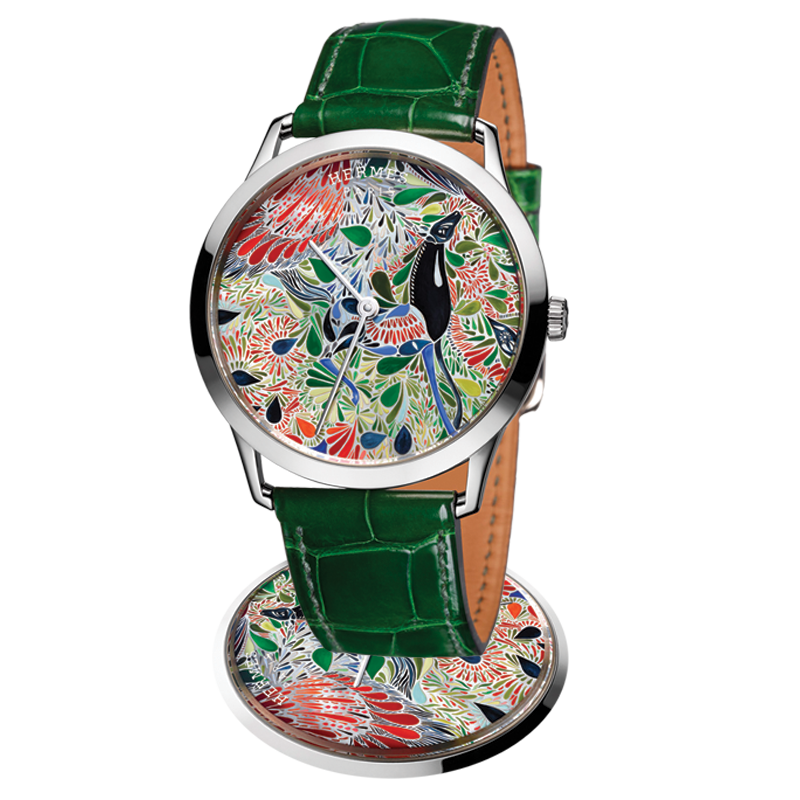 An iconic collection from the Société Cartier, it is made for both men and women and features an extra-flat, sober, and minimalist design. It also boasts a manufacture mechanical movement with manual winding, caliber 430 MC. It is water resistant to approximately 30m, has 40mm in diameter, and is 6.9mm thick. The watch is encased in 18ct rose gold. 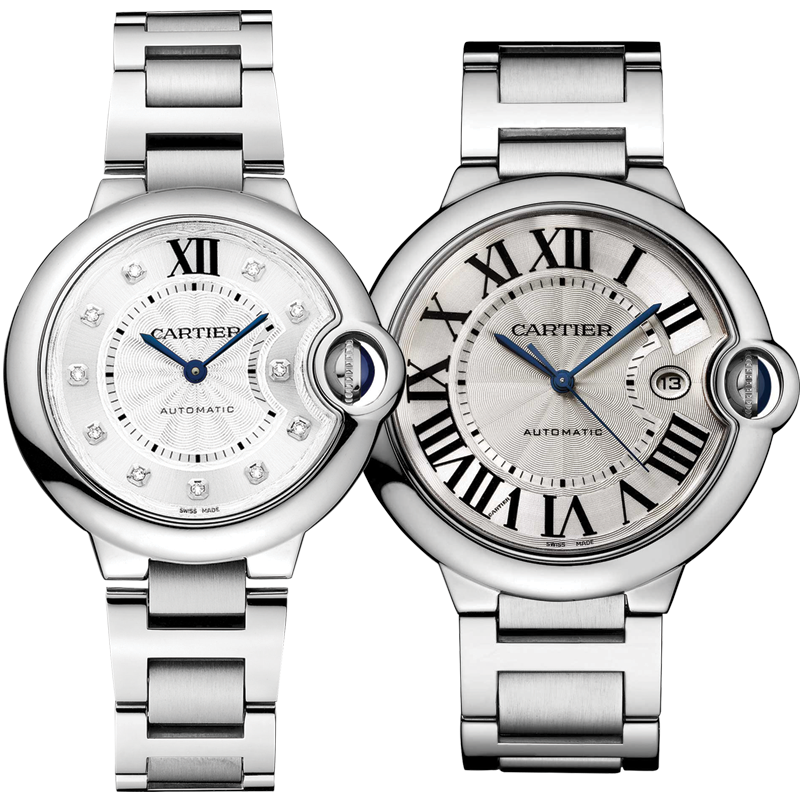 It holds the records for being the thinnest watch in the world at only 3.12mm, with a 6.85mm thick case. Inside, 362 miniscule components demonstrate extraordinary watchmaking engineering. The titanium case with incised cut-outs amplifies its acoustic resonance. 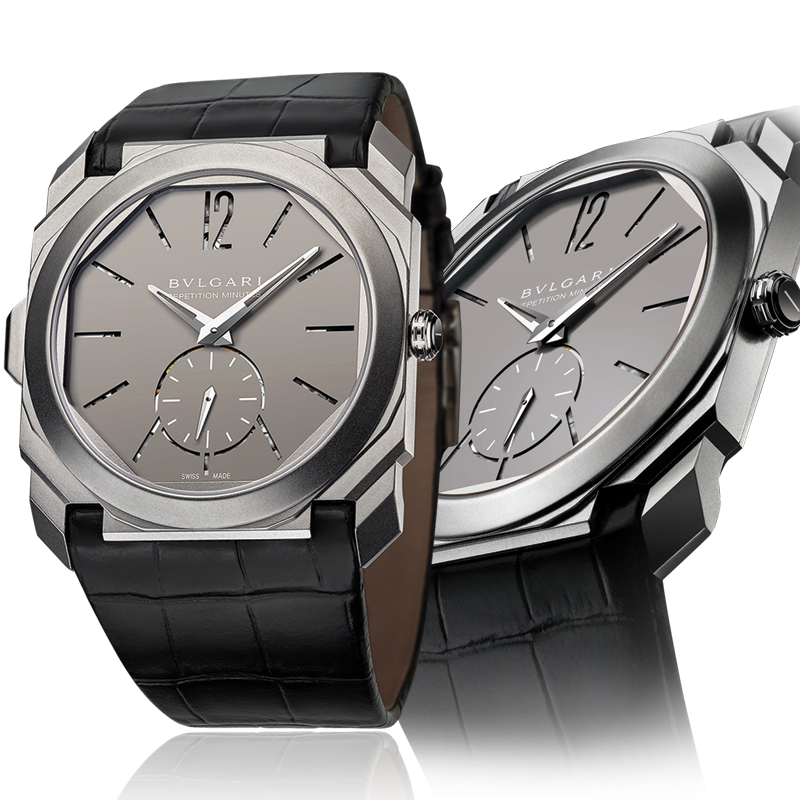 Featuring an unequalled L.U.C caliber 03.10-L, this watch is a delicate, flyback chronograph with a manual wind perpetual calendar. It has been awarded the Genève Seal and is certified by the COSC (Contrôle Officiel Suisse des Chronomètres). The watch is available in two models: one in white gold and one in rose gold, both limited to 20 pieces each. 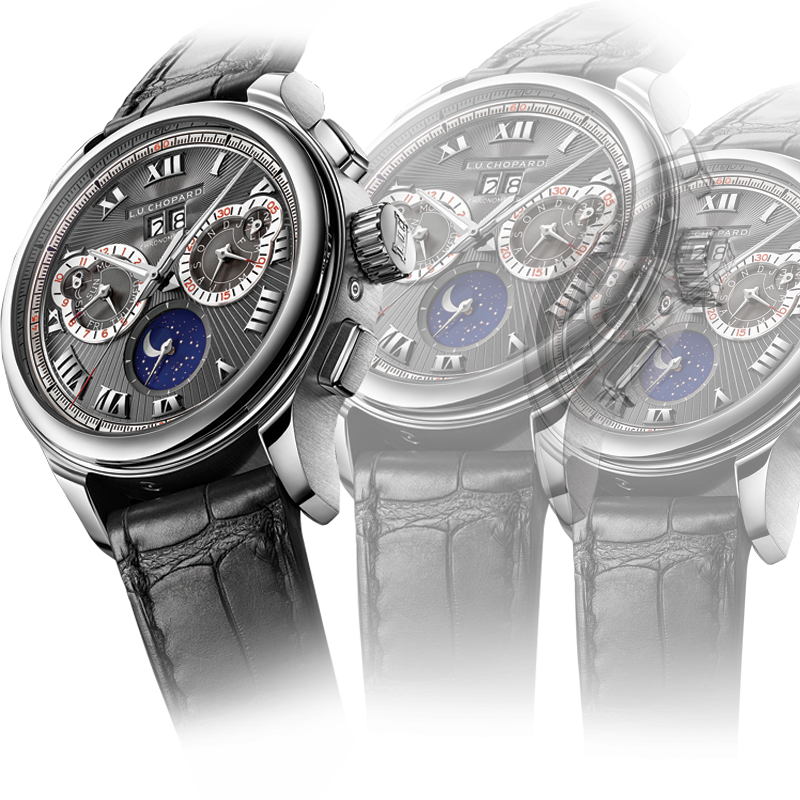