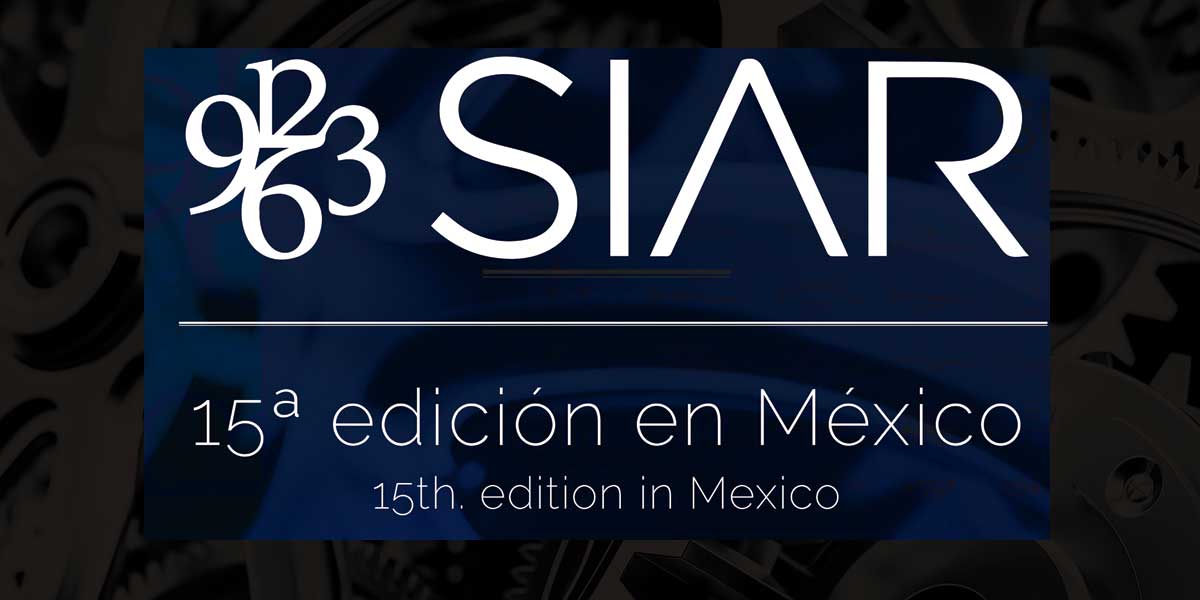 The SIAR once again became the focus of attention of the world watch market, confirming Mexico as a consolidated destination for the industry.

As it has been a tradition among the global watchmaking community for 15 years, Mexico City hosted the SIAR 2021, that showed a growing vitality after Covid-19.

On this occasion, 52 leading brands of the manufacture participated and presented their novelties to guests, collectors and potential customers who attended the event from October 19th to 21st, 2021 at the St. Regis Hotel. On this occasion, the increase of watchmaking houses was considerable, since in 2020 there were 34 firms attending the annual meeting.

The host of the event, Carlos Alonso, CEO of SIAR, celebrated that watchmaking companies in Mexico “endured well the Covid-19 pandemic, the most difficult challenge it has faced in decades, and from what we saw in this edition, SIAR will come out strengthened. Our sector has been able to build the foundations so that we can now obtain these results”. 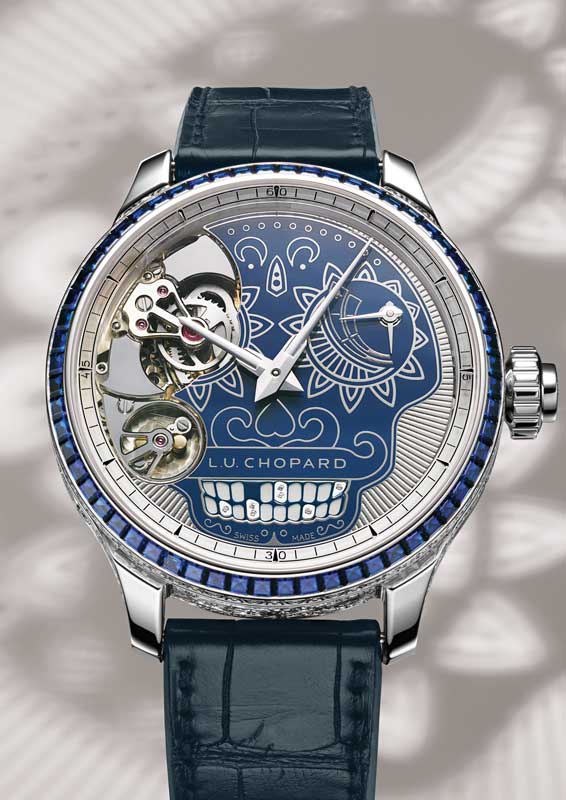 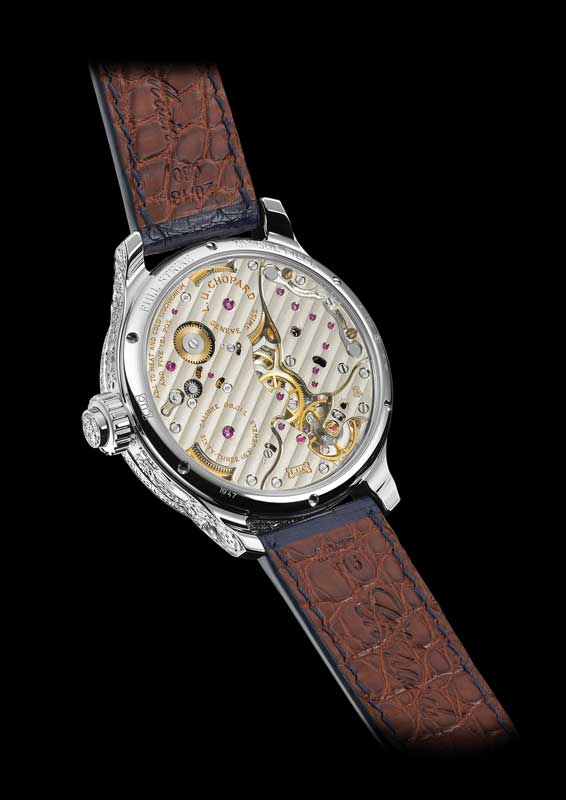 During the three days there were multiple presentations of new pieces, some unique and others limited edition. Such was the case of Chopard, that celebrated the 25th anniversary of the creation of Louis-Ulysse Chopard, L.U.C, and exhibited one of its most exquisite watches: The L.U.C Full Strike ‘Día de los Muertos’, which, limited to one piece, celebrates Mexican culture and tradition.

The referred timepiece is made of 18-carat white gold, completely hand-engraved all over the case. Its dial, adorned with an emblematic skull, is a unique interpretation of the minute repeater model, with the hammers visible in one of the eyes, and the inertia regulator – which defines the rhythm of the chime – integrated into the mustache. The second eye serves as the concentric power reserve indicator (60 hours).

The heart of the L.U.C Full Strike ‘Día de los Muertos’ beats to the rhythm of the L.U.C 08.01-L movement with which Chopard continues to testify to its mastery of the minute repeater mechanism.

Bulgari presented a pop-up exhibition where he wore all the models of the Octo Finissimo collection, with which, for the seventh consecutive year, broke world records among ultra-thin watches, thanks to its Italian design and mechanical prowess.

The most recent recognition was awarded thanks to the Octo Finissimo Perpetual Calendar, with the thinnest perpetual calendar on the market today. It using with a BVL 305 caliber of 2.05 mm and a total thickness of 5.80 mm, which required design engineers to make optimal use of the space between the 408 components that make it up.

Other notable models in the Octo Finissimo line are the Octo Roma, a contemporary watch with square and round shapes, for everyday use. And Octo L’Originale, which represents the origins of the collection, establishing a masculine idea of elegance with an architectural character that is reflected in its case with 110 facets.

Jaeger-LeCoultre exhibited two of the pieces commemorating the 90th anniversary of its iconic art deco rectangular Reverso watch: Reverso Tribute Nonantième and Reverso Tribute Small Seconds Green. The first, unconventional and fascinating, is completely different from previous Reverso models; the second is a tribute that includes the same features as the original design of 1931, a year in which the watchmaking world was still dominated by pocket timepieces with silver dial... then, distinguishing itself from the rest of the manufactures, Jaeger-LeCoultre innovated by adding colorful dials. 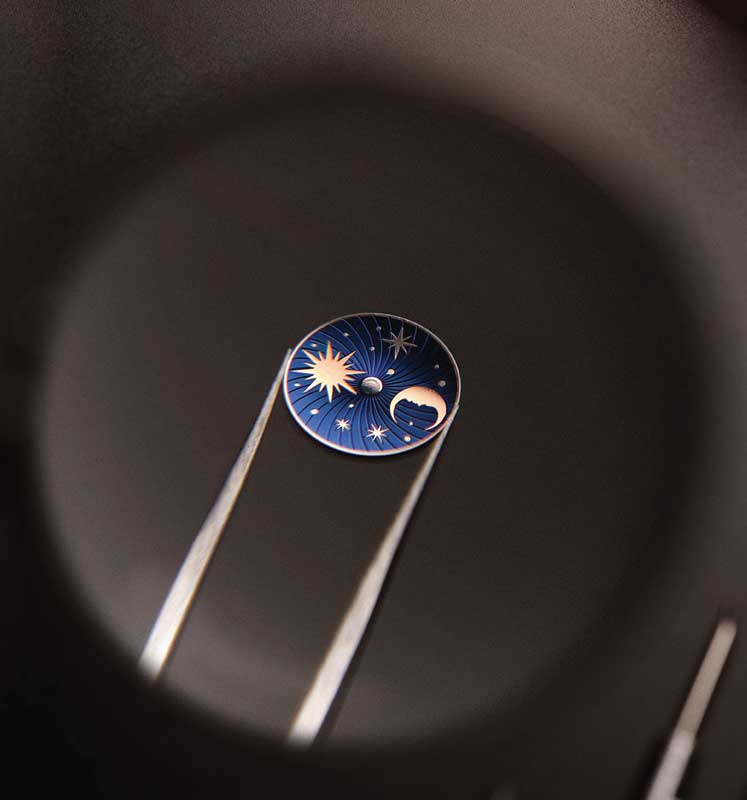 With Reverso Tribute Nonantième, Jaeger-LeCoultre commemorates the 90th aniversary of the Reverso watch. 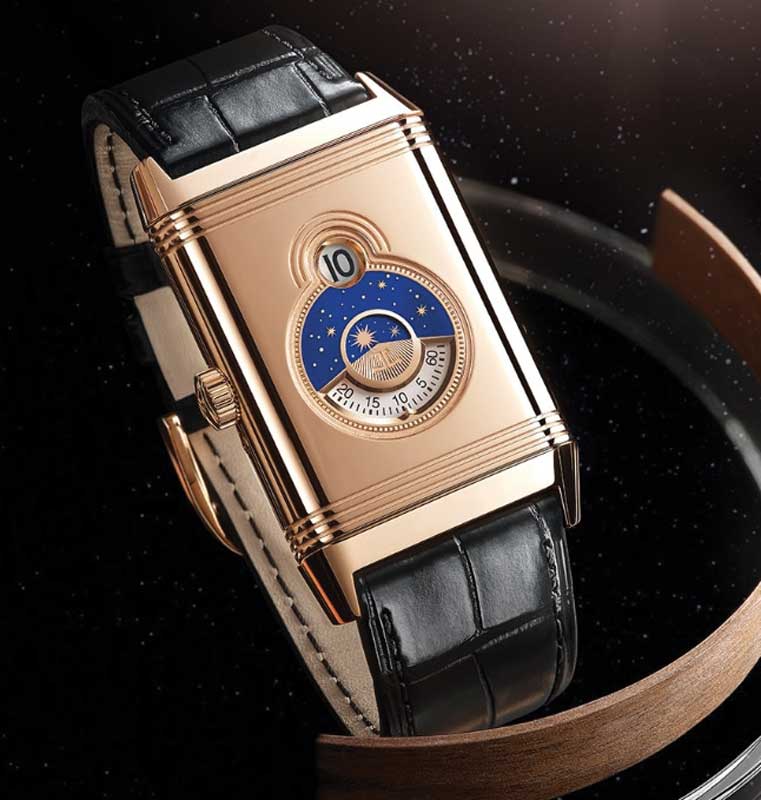 With Reverso Tribute Nonantième, Jaeger-LeCoultre commemorates the 90th aniversary of the Reverso watch.

Other major watchmaking houses showed monumental creations, such is the case of Vacheron Constantin with Les Cabinotiers that, in this year, paid tribute to the astronomical origins of time measurement with le Temps Céleste collection, which includes a range of unique models... the perfect illustration of the poetry of time and technical expertise.

Piaget Polo Skeleton was presented as one watch, two styles: one in Piaget blue and the other in a slate gray finish. Both are a 42 mm sports watch, with an all-new self-winding skeleton movement: the 1200S1, powered by an off-center micro-rotor engraved with the Piaget coat of arms.

Panerai exhibited the Submersible eLAB-ID, the watch with the highest percentage of recycled materials by weight (98%) ever conceived, found, for example, in 17 of its rubies. Its dial features luminescent dots and hour indexes. 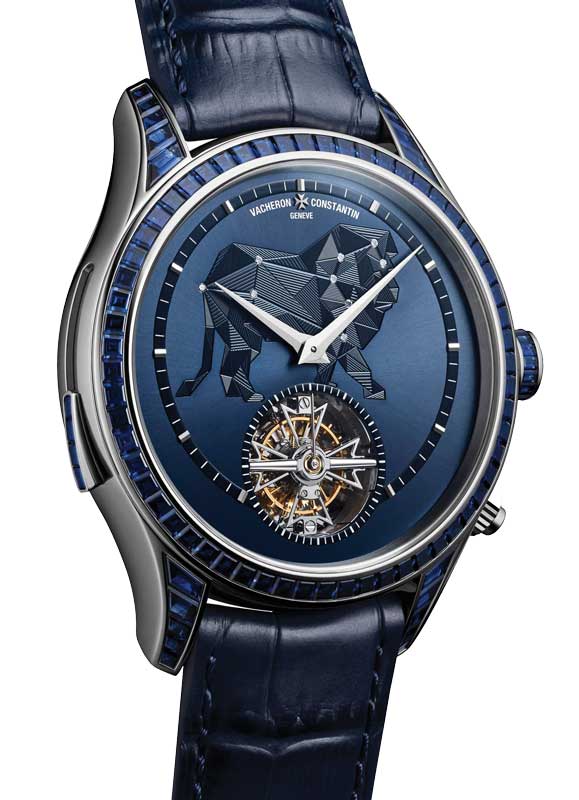 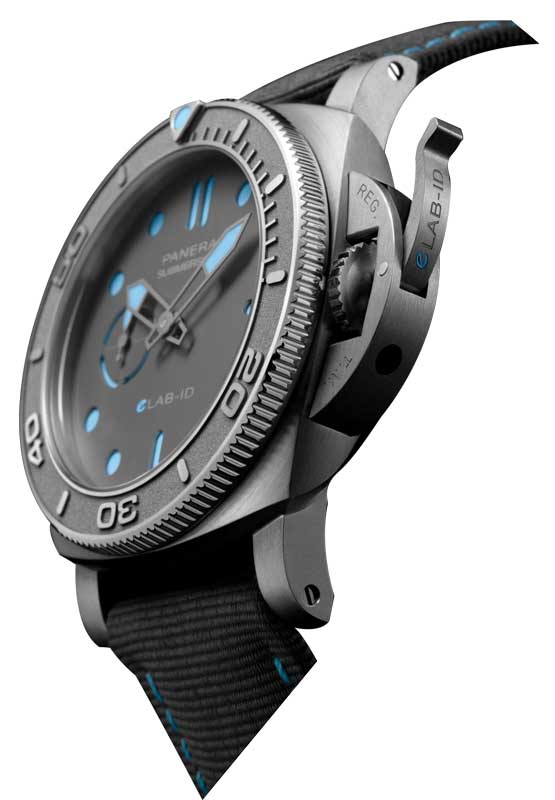 Panerai exhibited the Submersible eLAB-ID made from recycled materials. 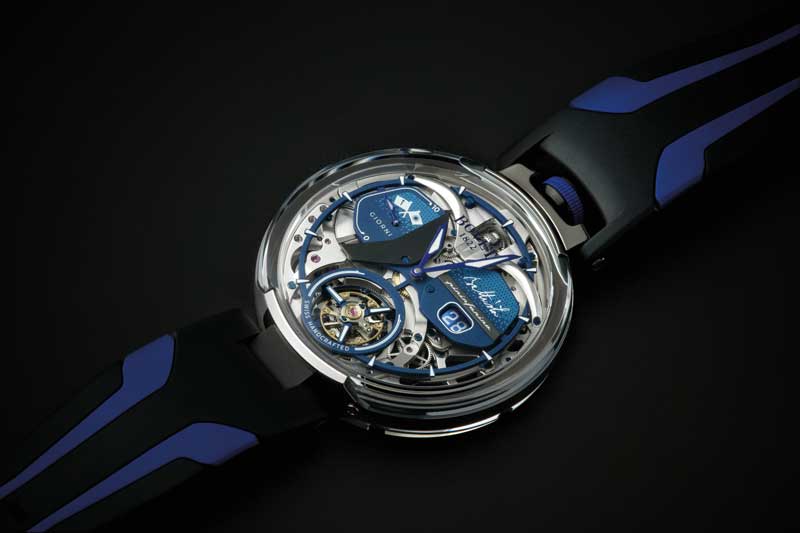 The Battista Tourbillon from Bovet 1822, a design by Automobili Pininfarina.

The Montblanc Split Second Chronograph Limited Edition 100 is a watch made of titanium and a diamond-like carbon (DLC) treatment: the black color intensity is rated ‘Black 4’, i.e the highest possible level of this tone. As for the dial, it is unparalleled, made of Mexican obsidian. Its heart beats with the hand-wound Manufacture MB M16.31 hand-wound monopusher chronograph caliber MB M16.31, which draws its inspiration from the original Minerva 19-09CH calibers of 1909, as well as its evolution: the 17-29, developed in the 1930s.

Among the world exclusives was also the Battista Tourbillon by Bovet 1922, a new creation between the watchmaker and Automobili Pininfarina, born with the same design vision of the revolutionary supercar Battista hyper-GT. 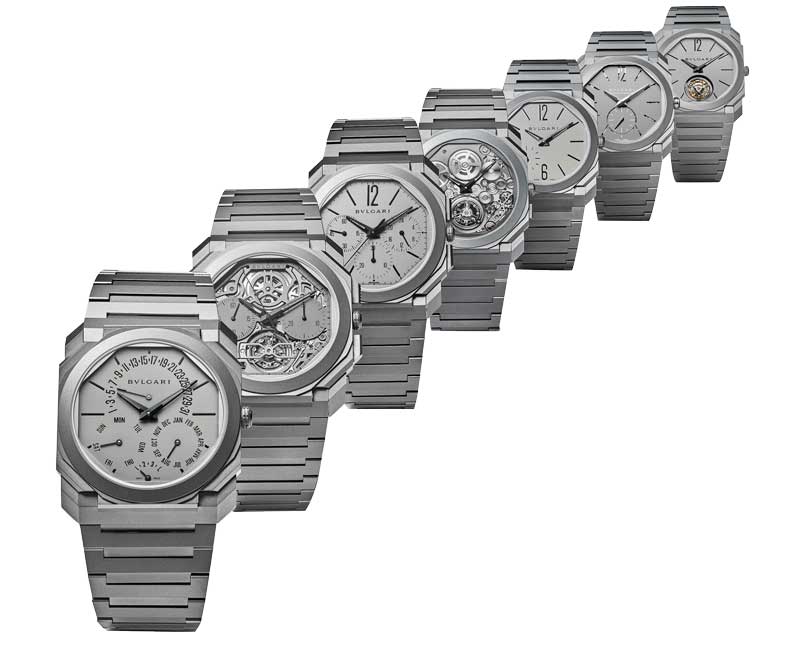 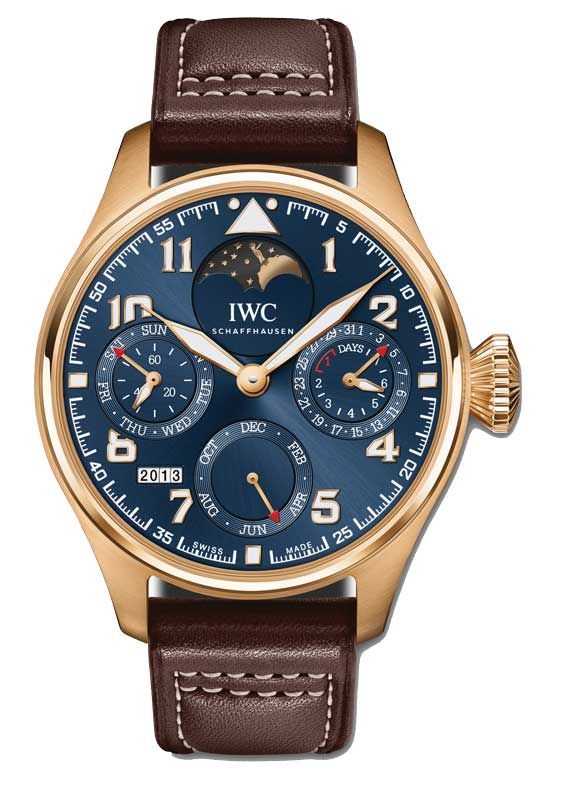