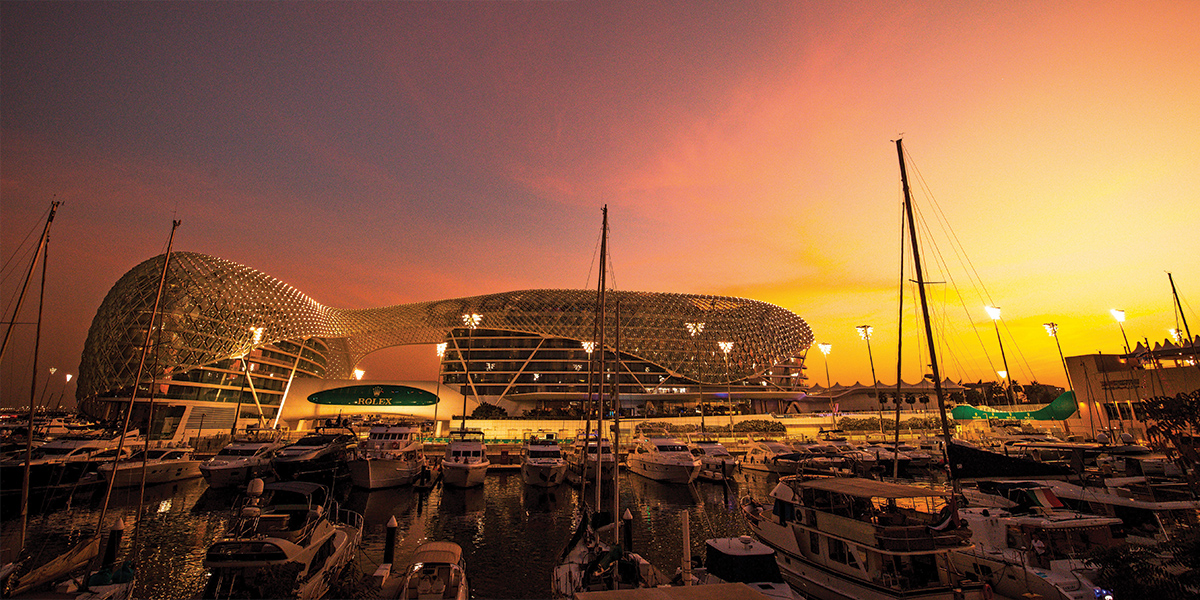 Since its beginnings in 1950, the Formula 1 World Championship has always been linked to the sea

Marinas and the Formula 1 Championship have a long history in common: wherever there is a racetrack or a street circuit where Formula 1 races take place, sometimes there is a naval port.

The most representative race by the sea is the Monaco Grand Prix, run for the first time in 1950 through the streets of the principality of Monaco, with the Port Hercule as the stage, where fans can comfortably watch the action aboard their yacht. The following is a journey through the 13 races of the 22 that make up the 2022 calendar, with marinas close to the track.

Durrat Marina Yacht Club, located on the southeast coast of Bahrain, it was designed for a pleasant stay. It features luxury villas and apartments, combined with cafes, shopping area, bars and restaurants, as well as open spaces, beaches and recreational areas.

It is an iconic development of 1.3 billion dollars, conceived to be an example of urban planning; it is part of the Durrat Al Bahrain real estate complex of 148 acres, distributed in three islands that complete the master plan, with a total investment of 6 billion dollars. Among the awards it has received is the 2008 CNBC Property Award.

The marina occupies an area of 44.5 acres and is located at the center of the three islands; it has a capacity of 400 berths for yachts ranging from 33 to 85 ft. It offers all the first class services for boats. 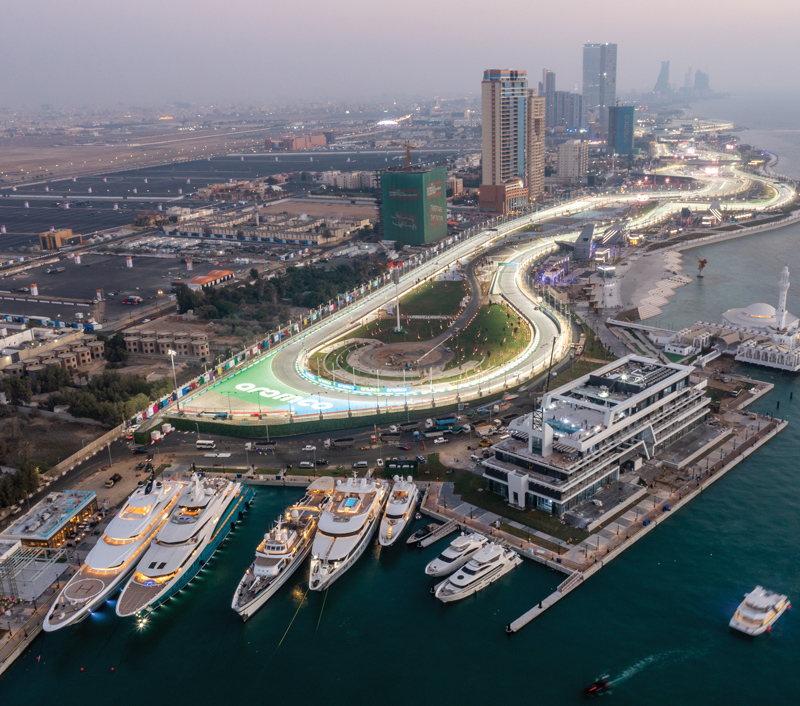 The Formula 1 Grand Prix of Saudi Arabia takes place next to The Jeddah Yacht Club Marina.

The Jeddah Yacht Club Marina was inaugurated on the occasion of the Saudi Arabian Grand Prix in March 2022. It is the first marina along the Red Sea coast that can accommodate superyachts and megayachts up to 394 ft in a world-class environment.

It offers all the necessary supplies of electricity, water and fueling facilities, plus repair and maintenance workshops, in a modern and functional environment. It has a heliport for guests wishing to embark or disembark discreetly.

It turned out to be a project built in record time: six months from the laying of the foundation stone. The complex includes the 394 sq. ft. Jeddah Yacht Club with spectacular amenities for its members, such as Michelin-starred chef Jason Atherton's restaurant, wellness and business center, lounges, concierge services, nautical activities, luxurious stores and a promenade around the marina basin. Its Beach Club features an infinity pool overlooking the Red Sea.

St. Kilda Marina was inaugurated in 1969 on land reclaimed from the sea and is considered Australia's first large-scale marina, which served as a model for other sports harbors. Work recently began to improve it, with an investment of more than 20 million dollars, and open it to the public with pedestrian walkways, as well as adding more restaurants to the existing ones - Riva and St. Marina - and stores.

The port offers a variety of benefits including wet berthing with 150 spaces for yachts up to 30 ft, and dry berthing for boats up to 27 ft, trailer storage and jet skis. It has a repair shop and refueling facilities.

Miami Beach Marina, located at the entrance of Miami Beach, without fixed bridges and in deep water, its docks allow the arrival of yachts from 49 to 161 ft. Due to its location, it offers easy access by land to downtown Miami and the Miami International Airport, and by sea, to the Atlantic Ocean, the Intracoastal Waterway, Biscayne Bay, the Miami River and the Florida Keys.

There are 400 berths with all the services, such as parking with covered and lighted garage, fuel loading, pump-out, elevators with capacity for boats up to 18 tons, assistance personnel, security patrol and surveillance camera. It has luxury restaurants and bars.

Mataro Marina Barcelona, located on the western dock of the port of Mataro, is a quiet and safe marina. There are 30 moorings distributed in two docks fully operational and with all the services.

It can berth vessels from 66 to 197 ft., with fuel, electricity and water supply, with individual electronic meters, attended by specialized personnel; waste and sewage collection, as well as 3 acres of technical area specialized in repairs and another specific area for storage and maintenance of tenders.

It features state-of-the-art security devices, surveillance cameras around the perimeter of its facilities and low-impact LED lighting throughout the premises for minimum light pollution. Due to its location, there are hotels, shopping malls and beaches nearby. It has a large sports area with paddle tennis and basketball-training courts, a playground with barbecue grills and green areas spread throughout the nautical base. 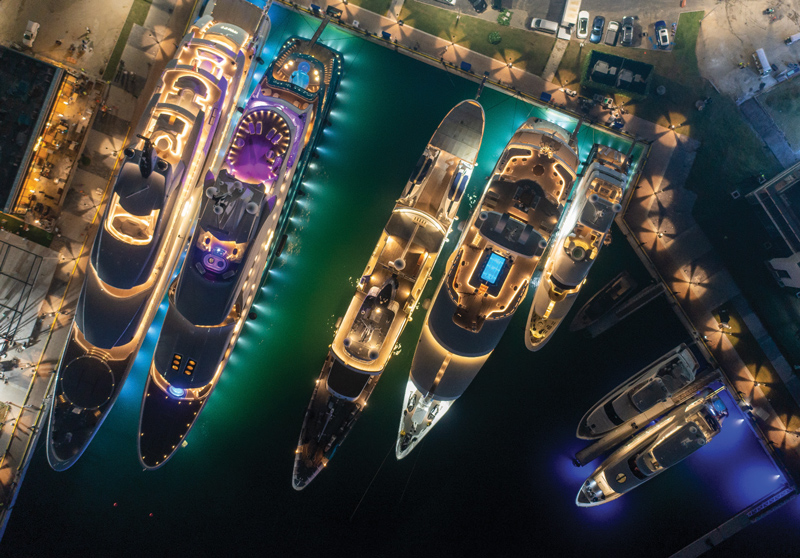 This season, the Saudi Arabian Grand Prix was held for the first time at The Jeddah Yacht Club Marina.

Port Hercule, located in a natural bay, is considered one of the most representative and distinguished ports in the world; it has 700 moorings, and its natural depth allows the arrival of cruise ships up to 984 ft. The pier offers fresh water, electricity and fuel services, among others, as well as all the services for the crew.

In ancient times, it was used as a commercial port by the Greeks and Romans. At the beginning of the 20th century it was improved with the construction of a pair of pillars that give it better protection; later it received more adjustments with a new dock and a breakwater to give it greater protection, this included the construction of a structure of 1,050 ft long and 160,000 tons of weight at the foot of the Rock of Gibraltar, with the particularity of being semi-floating to protect and conserve the local marine fauna and flora.

It has recently undergone further refurbishment to update the facilities and turn it into the most modern and practical marina in the western Mediterranean. Its docks house the Yacht Club de Monaco Marina, with 26 berths for superyachts from 92 to 197 ft., a pontoon for tenders and a charter terminal, and the exclusive Club House, home of the Automobile Club de Monaco and the Stade Nautique Rainier III.

Yacht Club Baku, opened in 2004, is a 5,980 sq. ft. complex located in the center of Baku Bay, in the southern part of the Absheron peninsula, facing the Caspian Sea. Alongside all the first-class services for yachts, there is the Baku Yacht Club, an actual building in front of the pier, which resembles the shape of a yacht and the wings of a seagull. Inside it houses a lounge, gymnasium and games room, and a hotel with a couple of restaurants.

Part of the attraction during the Formula 1 Grand Prix is to enjoy the competition from a yacht and attend the Formula 1 Yacht Club Party, similar to the atmosphere and fun of the races in Monaco, Dubai and Abu Dhabi. The setting is the huge upper terrace of the Baku Yacht Club. 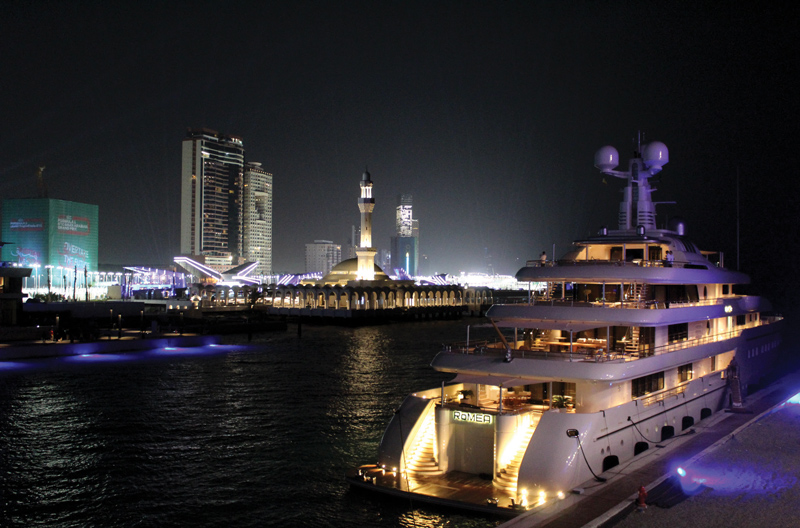 Yacht Club de Montreal, located on the St. Lawrence River, in the Old Port of Montreal, a few minutes from downtown Montreal, it offers 81 spaces for yachts between 23 and 82 ft. It provides every attention to yachts, with an emphasis on security, with access only with a magnetic card.

Upon approaching the dock, visitors are greeted by the image of the clock tower, a construction dating back to 1922 in Old Montreal; the marina has been remodeled to serve travelers with the latest technology. Because of its location, the floating docks are built to withstand the freezing of the river, which allows it to host the local community that practices Nordic-style ice fishing during the winter months.

Wilking Yacht Club is a place on the Danube River, in the heart of Budapest, to refuel and take advantage of port services including rest areas; it has a place for storage of boats and trailers, and cranes. It has the Shipyard Island harbor, which provides safe berthing for 200 vessels.

Due to its location, Shipyard Island attracts not only local yachtsmen, but also international crews, due to its high level of services. It features sports facilities such as soccer, basketball and tennis courts, bicycle rental and a terrace for social gatherings, as well as a swimming pool, Jacuzzi and restaurant. 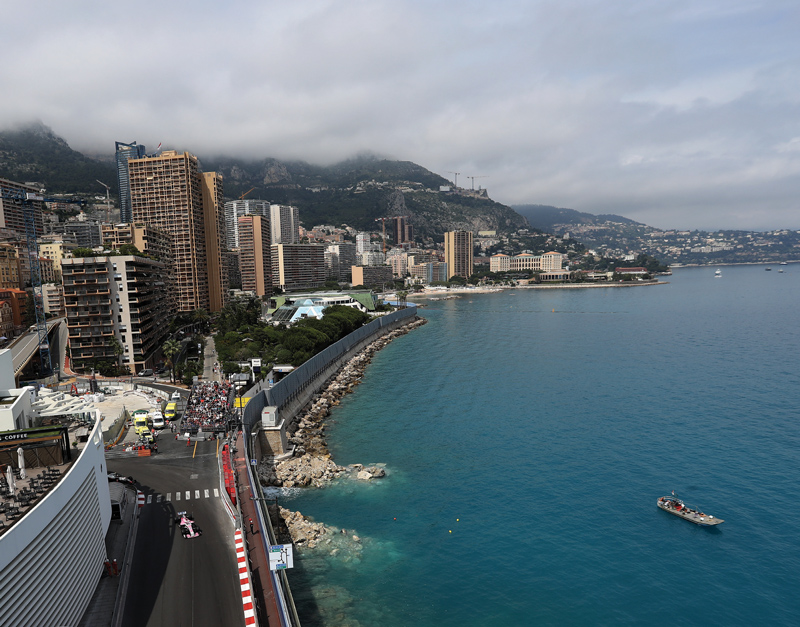 The Port Hercule, the gateway to the Principality of Monaco.

Marina Seaport IJmuiden, with direct access to the North Sea, outside the locks, the port has 650 berths for all sizes of pleasure boats and mega yachts. For the environmental quality of its processes, it received Blue Flag recognition for environmental quality, including care for the Kennemerduinen nature reserve and the surrounding beaches.

As a modern and safe harbor, it is equipped with all the technical facilities to serve visitors and their yachts; in the immediate vicinity of the harbor there are restaurants, cafes, a beach hotel, stores, entertainment and water sports facilities. 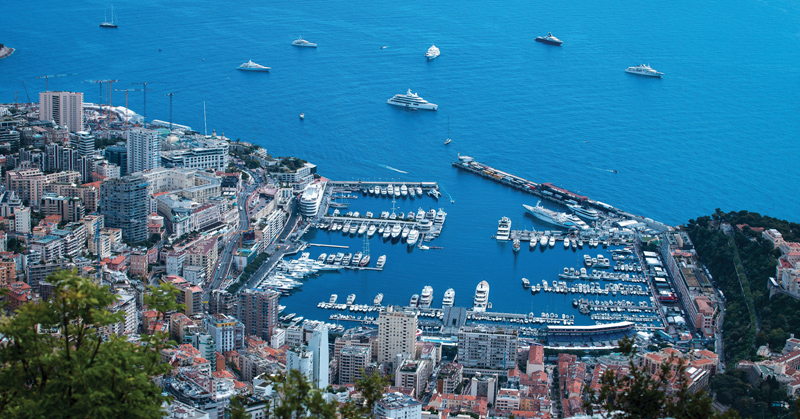 Historically, Port Hercule has been the entrance to the Principality of Monte Carlo.

Republic of Singapore Yacht Club, founded in 1826 under the name Royal Singapore Yacht Club, is the oldest yacht club in Asia and the only one owned by its members. Due to its location, it offers quick access to the southern islands and the Riau Archipelago. It currently has 118 wet berths, 18 of them for superyachts and 196 dry berths.

It is equipped with a full range of facilities for members and visiting yachtsmen; it provides a user-friendly pontoon system, security, fueling facilities, shore power, a dedicated water point and trolley transport to and from the boat.

The new clubhouse is open for the crew of visiting yachts. The site includes the Marina Lodge hotel, restaurants and bars, and water sports facilities, tennis court, gym and pool. 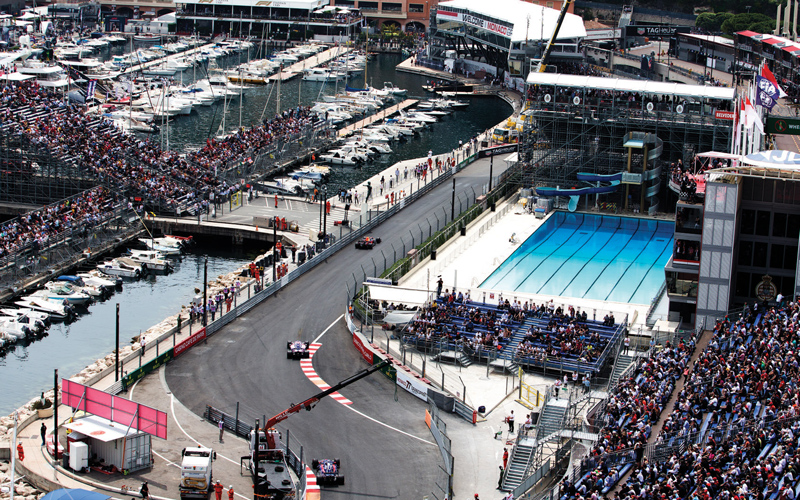 The famous "Pool Curve" of the Monte Carlo circuit.

Kawage Marina, with a land area of 25 acres and an aquatic area of 6.6 acres, it provides storage for 380 boats. Services include water and power supply, pontoon, direct refueling station, sanitary station, 25-ton self-propelled crane, and electric ramp for slopes, among other facilities.

The clubhouse has a function room, conference room and restaurant overlooking Ise Bay and the Tanaka River. 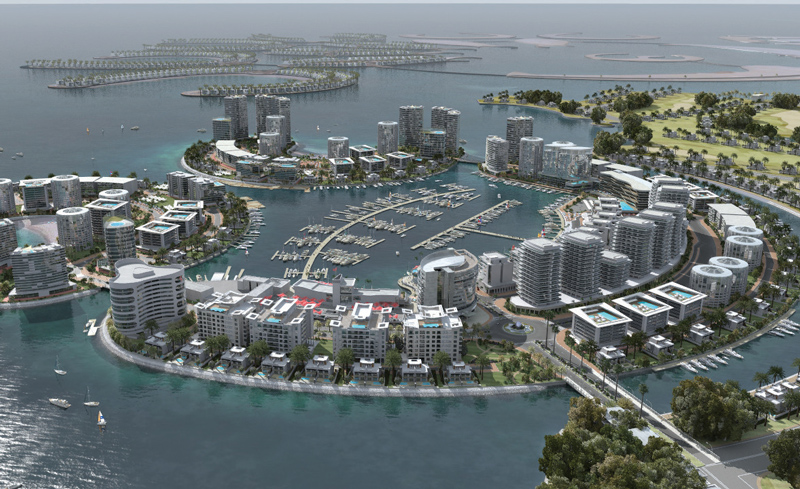 Yaz Marina, located on Yas Island, the marina has 227 berths for boats from 26 to 295 ft., with berths for visiting superyachts up to 574 ft. For the quality of its facilities, it received the 5 Gold Anchor Platinum award from The Yacht Harbour Association. On every departure along the waterfront, the yachtsman enjoys views of the spectacular W Abu Dhabi-Yas Island hotel and the Formula 1 circuit.

The Marina provides 24-hour berthing assistance, with fresh water and power equipment for vessels up to 574 ft., waste disposal and sewage and gray water pump-out infrastructure.

Other amenities include fitness and physical therapy center, water sports, boat rentals and a children's playground. After dark, it is a gathering place with nine restaurants and entertainment venues.