Seince I was very young I've always felt a great passion for close encounters with dangerous animals. This passion has led me for more than 10 years to face with only mi body, without the use of any protection, more than 600 angry bulls. And it was here, in my years as a FORCADO. where I have manage to acquire the serenity and calm that today helps me be near sharks, at distances that allow me to take unique photographs.

I began diving more than 15 years ago and more than 4 years ago my love for sub aquatic photography began. Now, this passion places a challenge in my life, to photograph those who are considered “the ten most dangerous sharks in the world", without the use of cages.

Why without the use of a cage?

With this I would like to prove that sharks are misunderstood predators, which have been labeled wrongly with the mark of killers without being so, since most of the attacks that register humans are caused by identity bewilderment. Sharks, lacking hands, use their jaws to see and find out what it is we are. 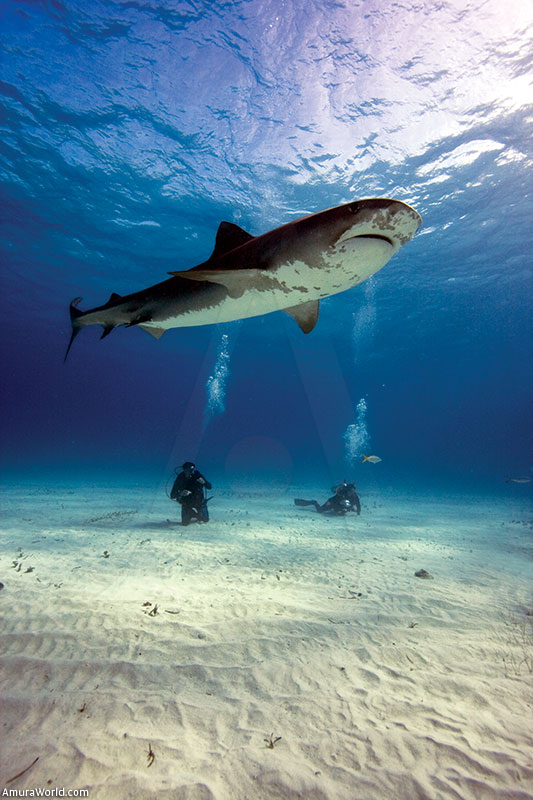 In danger of extinction

One of the current main causes that endanger shark populations is the increasing demand on shark fin soup, considered an exquisite dish in some countries, they are taken out of the water just to cut their fins when they are still alive and afterwards they are returned to the sea, where a slow death awaits them.

Nevertheless, the biggest threat is commercial fishing. Millions of sharks are scarified each year because of their meat, liver (fat). CARTILAGOS, jaws, teeth, internal organs, skin, and above all, their fins.

How long will this project take?

Due to large distances that have to be traveled, at the time I have to pass in each place, to how difficult it is to see some of these sharks and the sea- sons to observe these species are very short, we have an estimated period of three years to finish it.

Tiger Beach. Bahamas, is found 25 miles at the Northeast West End in the Great Bahama, in Little Bahama Bank. The main objective is to photograph the Tiger Shark. The place it holds is among the most dangerous ones: third.

The name is because, as the great Asian feline, this shark carries a series of dark transversal stripes at the back and on the side, which tend to blur with age.

The rest of the body is gray or light greenishblue, being replaced by the white on the face and ventral zone. The nose is snub and the head represents a rectangular shape, with a big mouth.

The eyes are big and round and the nasal orifices long and advanced. The teeth are sharp and pointy, provided with strong saw like edges. 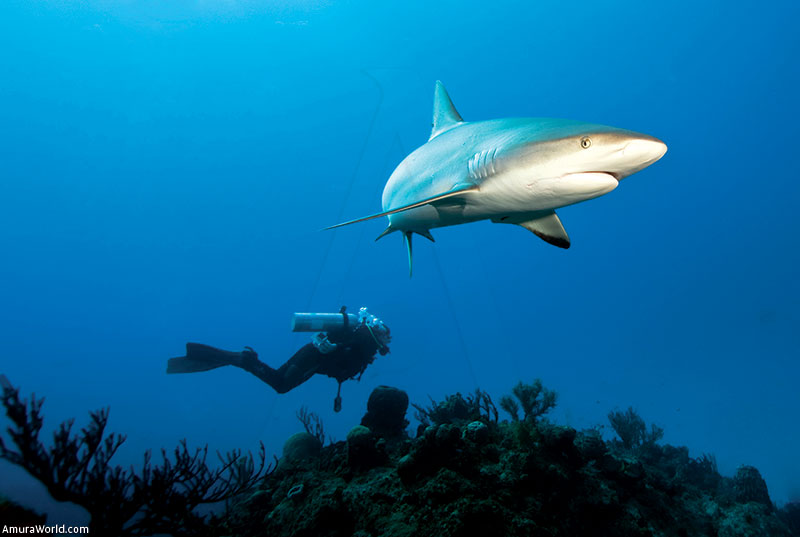 The tiger shark is a lonely predator and mainly nocturnal, that attacks all sorts of preys, from bony fishes to striped squid and other sharks, passing through crustacean gastropods, sea snakes, sea turtles, crocodiles, birds and marine mammals, (seals, dolphins, cetacean, etc.)

These sharks are found in the tropical and subtropical waters of Oceania and the Asian southeast, arriving from the north to Japan and from the south up to New Zealand. It is also found in the coastal waters of the whole Indigo Ocean, the Persian Gulf and the Red Sea.

In America it is found at the Pacific Coast, from the south of California to the north of Chile (including several islands like

Revillagigedo and the Galapagos), and the Atlantic, from the Rio de la Plata to New England, being the Caribbean and the Gulf of Mexico particularly abundant.

After ten hours of traveling we awoke at West End at the Big Bahamas. The tiger sharks became present very soon, and without thinking twice we prepared ourselves to go into the water.

Once at the bottom, more than 20 lemon sharks two meters long started to surround us. At first, it seems terrifying, but with time we felt a little more comfortable, since they showed no interest in us.

Suddenly the lemons opened and a larger silhouette of a shark with stripes on its back like an Indian Tiger appeared: the first Tiger Shark, it was spectacular!

Unlike the Lemon Shark, with this one we didn't felt comfortable at any moment, since more than once it approached and hit the camera.

When we thought we had seen it all, an amazing fourmeter female arrived! it was the size of a white shark. Two days more than 4 tiger sharks surrounded us at the same time.

When we finished our last dice, sadly we began to pack our gear to head back home, but of course with a big smile on our face for having achieved the first step in the project of “photographing the worlds 10 most dangerous sharks”.