The journey would last for twenty minutes. I was told, “it would be as if you were taken to the past, it’s the ideal place for a moment's peace.” After all the commotion and nightlife of Cancún, this was just what I needed. I bought my passage without even hesitating, a roundtrip for the same day. Sunscreen and sunglasses were my only company.

It was early. I breathed the fresh air that only comes out at sea during the mornings. Leaning against the ferry’s rail, I said goodbye to Cancún.

I saw it for the first time shortly after boarding. The long stretch illuminated by the first sun light welcomed me. The fishermen slept on their boats, worn out by their duties during the night while the sea gulls claimed their lunch. 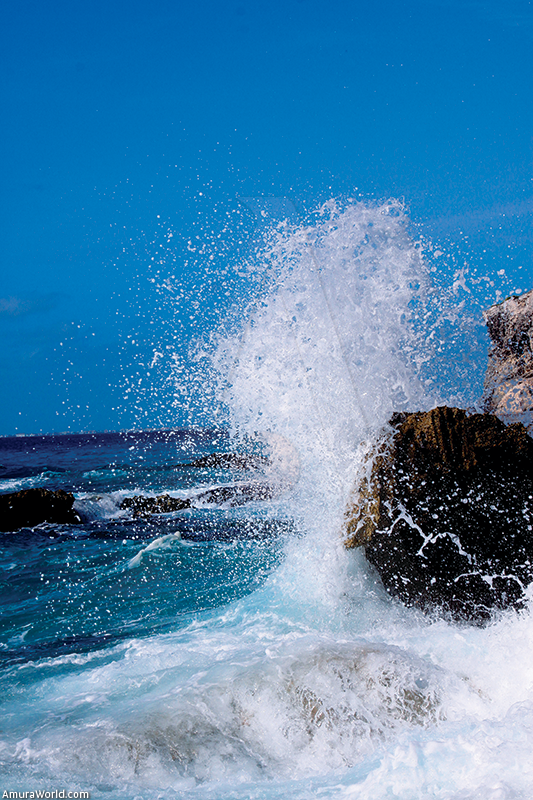 The ocean was shining. The waves were still steady. The families that ran from the Castas War and came to colonize the island after the Mayans must have seen something similar. On a rock, by the beach, I was able to see a young man’s silhouette that seemed to dance to k’iin. The sound of the helm distracted me for a few seconds. When I returned the dancer's sight had vanished.

When setting in I was welcomed by the murmuring of salesmen that rode the streets at those early hours. With their charming Mayan accent, they showed local crafts made of clay, sea shells and textiles.

I didn’t know much about the place. I had only read that its name was given to it after a local tradi- tion where women offered clay figurines to Ixchel, goddess of the Moon, love and fertility. Thousands of female figurines were found by the Spanish sail- ors that uncovered the sanctuary. What were these women seeking? That’s something we will never know. Were they looking for love? Were they trying to ensure their legacy? I was starting to think that I should have brought my own offering. It’s possible that Ixchel keeps fulfilling the desires of those with pure hearts. 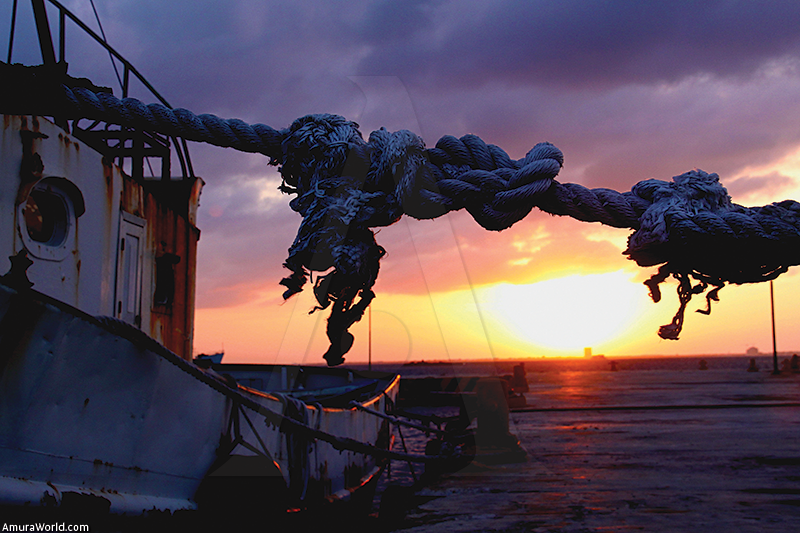 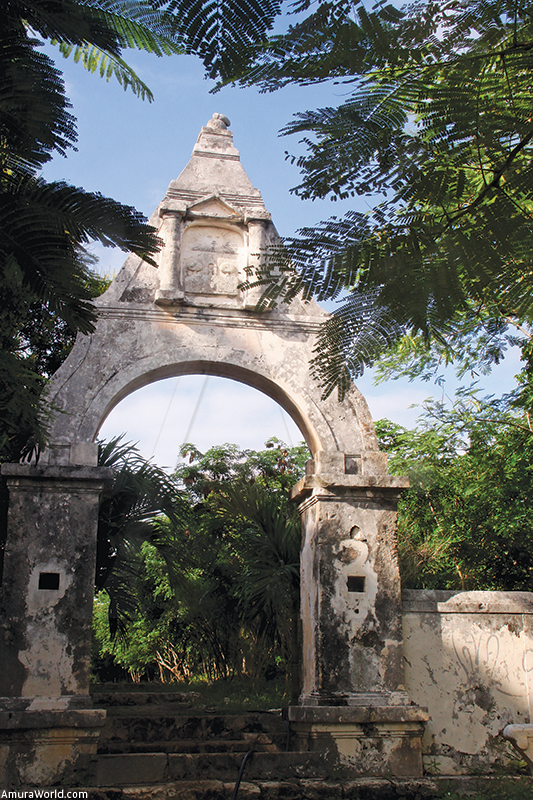 The small stretch is seven kilometers long, from north to south. I could go back and forth the island several parts during the day. In the beach near the port a group of people practiced yoga, waving at the sun with body and mind.

I stopped at a small open air establishment in the popular Hidalgo Avenue. Horchata flavored water, papatzules, and sweet bread to start the voyage. A tour guide approached me to offer me several op- tions for my day: visiting Contoy Island, a bird shelter, snorkeling in the famous El Garrafon, the Sleeping Sharks Cave or the beautiful coral reefs of Farito, Islache and Manchones.

I decided to get to know the island by myself walking freely, wherever the pavement roads that once were sand will take me. I also had the option to rent a golf cart, a motorcycle or a bicycle to go through the island, but I preferred to walk to the zone named Punta Norte. Plagued with Caribbean colors, Punta Norte is one of the most beautiful spots in the island.

The hotel’s colorful façade form a great part of the island’s architecture, which basically lives off tourism. You can find reasonable accommodations to luxurious five star resorts. The perfect scenario to rest, take the sun, take a nap nurtured by the zone’s peacefulness. It’s definitely considered the best beach of Isla Mujeres. The ocean’s color is unique. 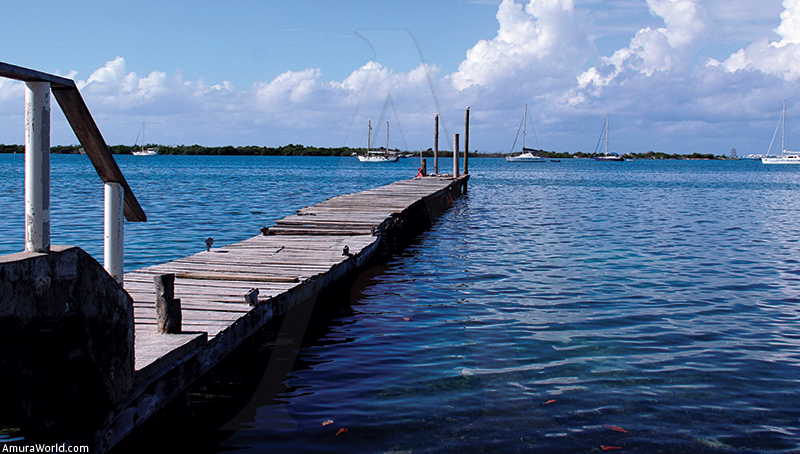 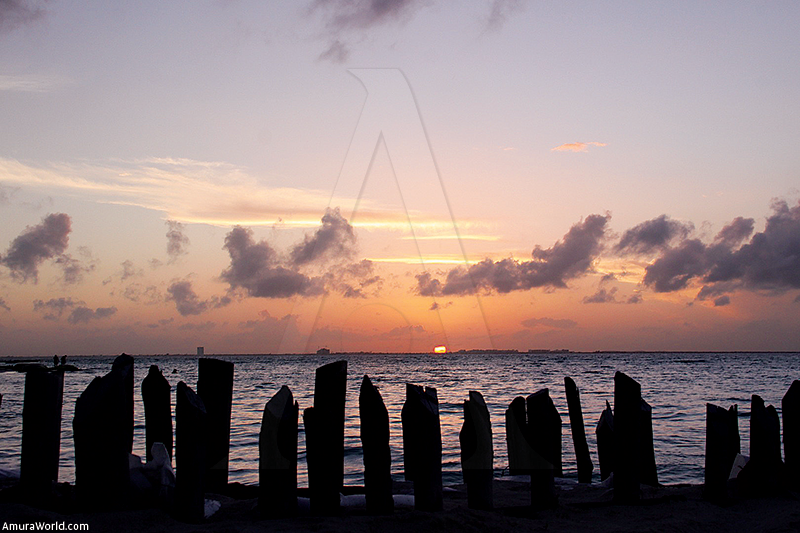 After a not-so-short break I headed towards the other end: Punta Sur. On the way I bumped into remnants of an antique construction: the entrance to what once was known as Hacienda Vista Alegre, which belonged to the famous Spanish pirate Fer- min Mundaca. They say he fell in love with a miller that never corresponded his feelings for whom he built the “Miller’s Arch”, which is located in the entrance of the hacienda’s garden. The renowned phrase, “What you are I was and what I am you’ll be”, along with a classic skull engraved in stone adorn pirate Mundaca’s tombstone. The most vis- ited in the municipal cemetery.

I went through the dock by the Caribbean side. I took a seat in an establishment where I couldn’t miss the opportunity to taste a traditional tin kin chic fish, exquisite. I visited the shops; some were more sophisticated than others. I was seduced by the silverware, the sea stone necklaces, the snails in countless shapes and the variety of hats that went from gold caps to the typical charro hat that served as a souvenir for tourists.

Punta Sur has a spectacular view: on one side Cancún, Puerto Juarez and Punta Sam, on the other side the Caribbean. Unlike Punta Norte, the water crashes against the island producing fabulous waves and strenuous sound. Throughout the years, the movements of the tides have formed a series of peculiar shaped rocks. Some are mushroom shaped while others are in the form of spikes. Over the cliff is a Mayan pyramid dedicated to the goddess Ixchel. The marine landscape and the remnants of our ancestors: one of the most spectacular sights I’ve ever seen. 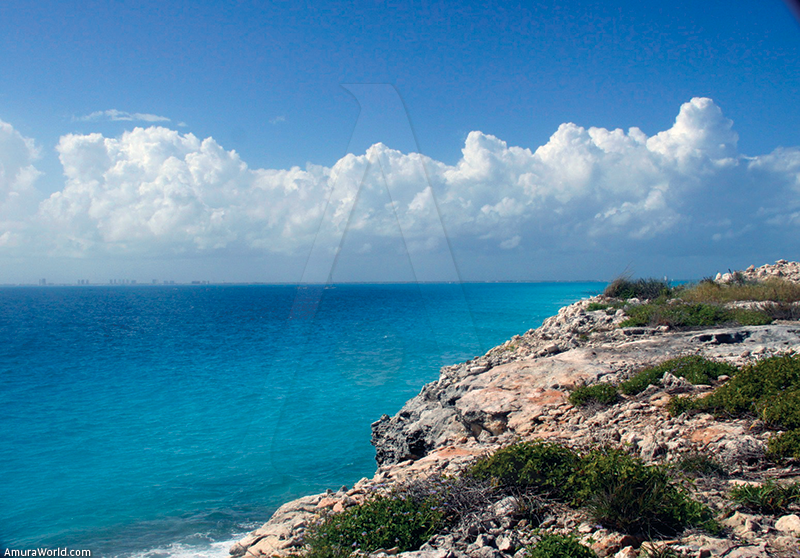 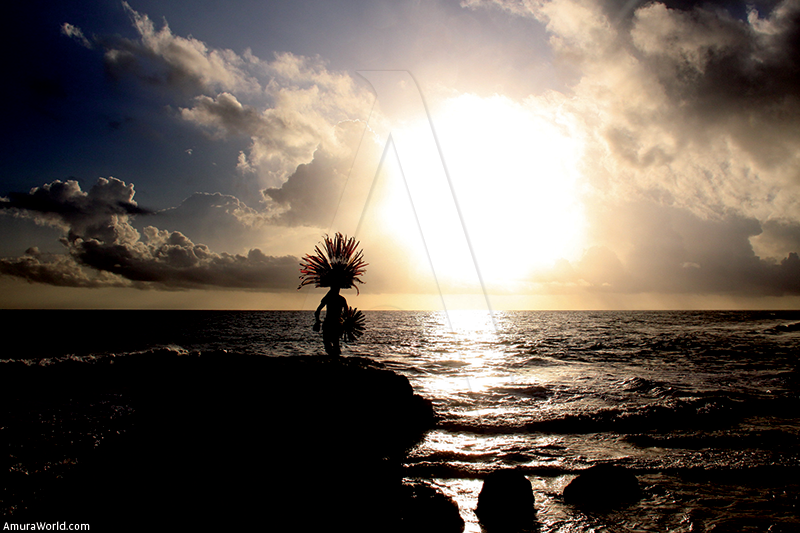 The night was falling gently and the bars, pool tables, lights and music began to claim the streets in the main avenues, a predominant welcoming environment between locals and tourists of all na- tionalities, with a bohemian touch. To bid farewell: panuchos, salbutes and a beer.

You can make a relaxing visit out of Isla Mu- jeres, such was my case, or you can be more adven- turous such as the people who snorkel, go fishing, swim with sharks or glide by wire. No person is ex- tent from being amazed by the variety of turquoise tones in the ocean, unique in the world.

The last ferry to Cancún set sail at eleven at night. I longed for more hours, walks, visits. With- out a doubt, my next ticket will not have a return set for the same day. 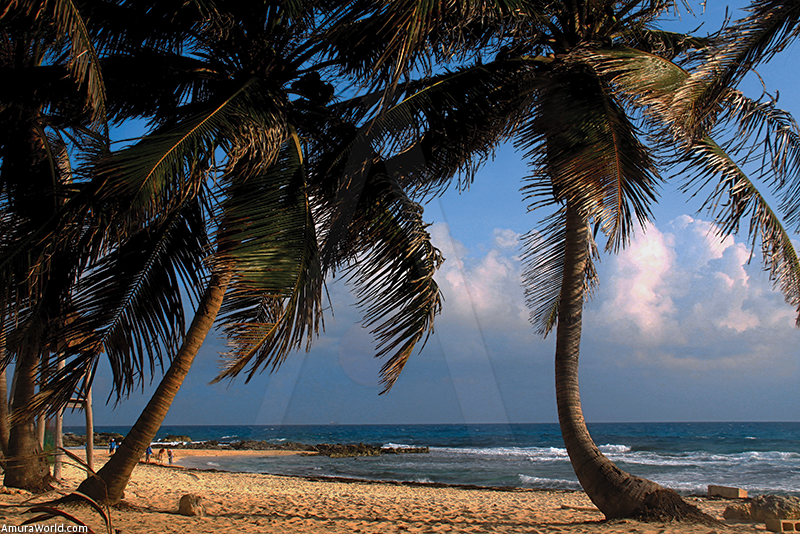