In Alaska, the so called “American wild paradise,” it is located the place where the modern world and the natural environment intertwine in enthralling forms: Anchorage. This city has become the most far-reaching one in the state, thanks to its growing infrastructure, its oil corporations and service companies; to its bustling cultural activity –mainly on the music business— and to its boom in tourism. Anchorage gathers almost half the population of Alaska.

But beyond this, Anchorage represents a spectacular window of wildlife and natural landscapes.

It keeps many green areas like forests and parks, mountain ranges like Chugach, Kenai, Talkeetna, Tordrillo, Aleutian and Alaska; Mount McKinley, a 6.096 meter peak, the highest mountain in North America; glaciers 80 kilometers around, being the Portage Glacier the most popular; glacial lakes, creeks, rivers; the waters of Cook Inlet, plenty of salmon; in addition to an abundance of fauna, like whales, otters, about 150 species of birds, moose, caribous, bears, Dall sheep and Bald Eagles. 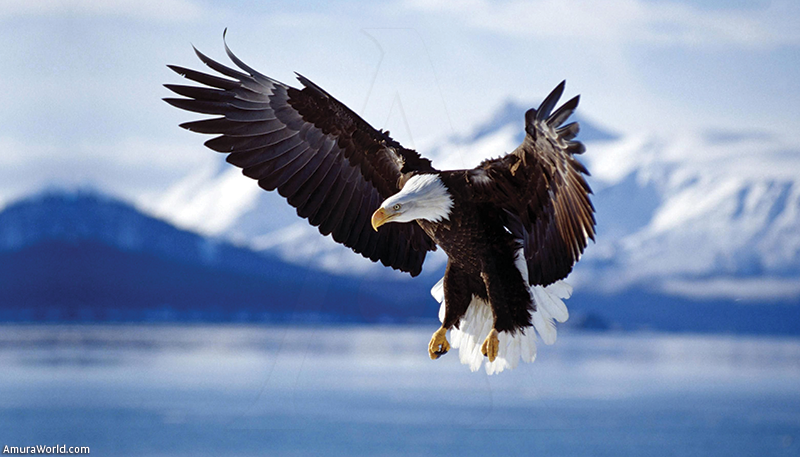 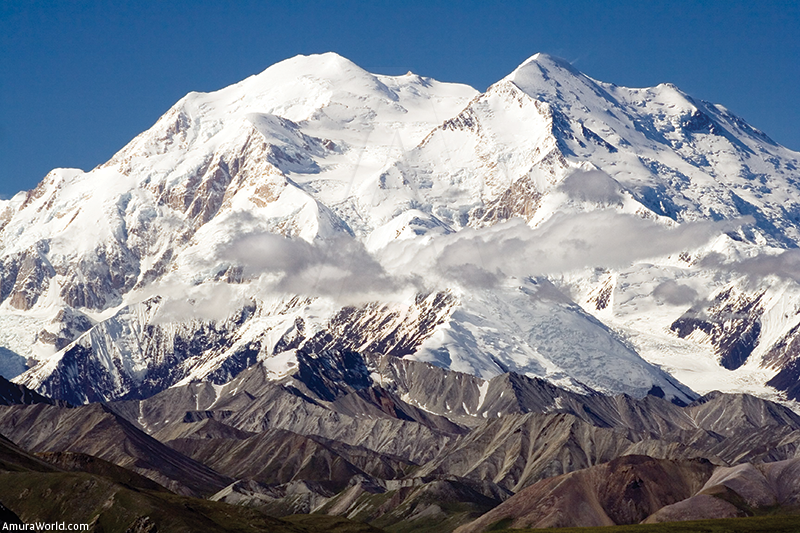 When the winter season hits the mountains of Anchorage with thick snowdrifts, the city gets inhabited by new members: the moose. They promenade around the neighborhood, appear in the streets or greet the neighbor from his or her garden. While they are trying to find shelter from the low temperatures or looking for food, it is common to bump into one of them downtown. Even though they are aloof and in general calm animals, the danger they usually pose is that by suddenly crossing the roads, they provoke car accidents, thus decreasing the herd; which also dwindles due to their hunt.

The moose is the gigantic member of family Cervidae and may be regarded as the most characteristic of Alaska. It is in this state where the greatest subspecies in the world are found. The male may weigh up to 800 kg and the female, up to 600 kg; it may reach a height that ranges from 1.4 to 2 m and a length that ranges from 2.4 to 3.2 m. 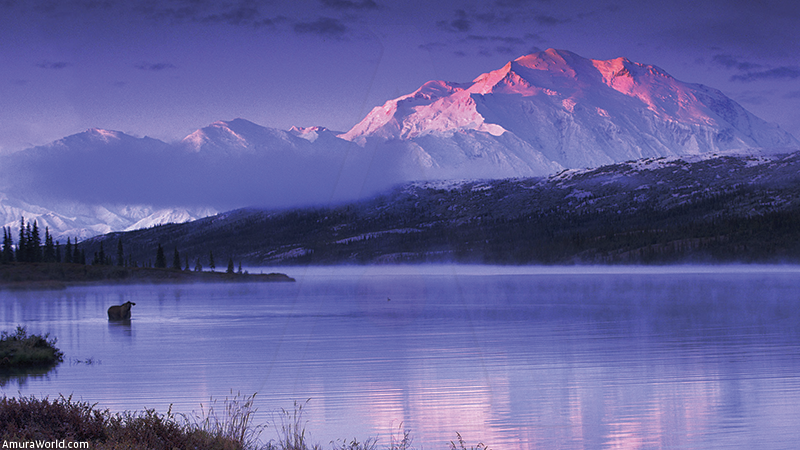 The males have dazzling and distinguishing antlers, marking them off the females which have none. The more developed their antlers may be, the greater leadership status they enjoy in the herd, depending on the age. Their antlers may reach 1.8 meters from side to side and may weigh up to 20 kg.

The moose is a bulky, stout animal, with a wide breastbone; its head and mouth are, each, long; some skin covered by hair, like a double chin, hangs under its neck. It has got firm and high legs, ending in hoofed feet that allow it to trot fast. The moose can run up to 50 or 60 km daily, reaching a speed of up to 56 km/h in short distances. It is a good swimmer.

They are usually solitary in their mature age after mating; they might get together in little groups, though. It seeks tranquility but gets restless in hostile environments or when lacks food. 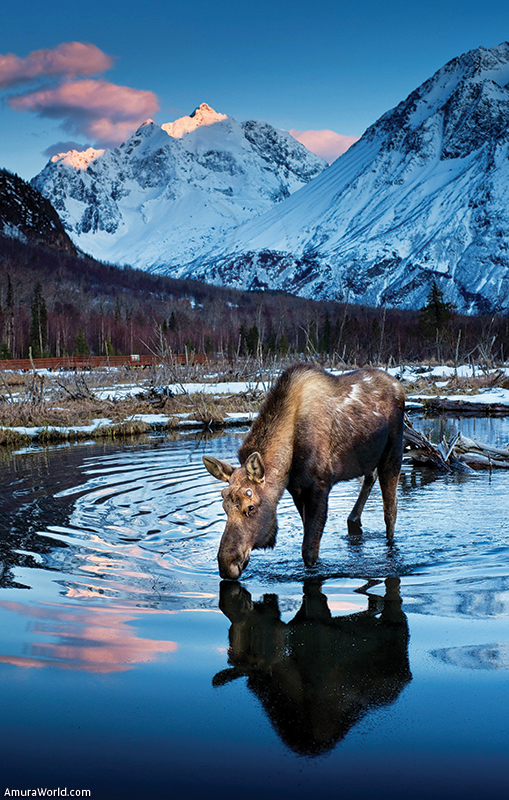 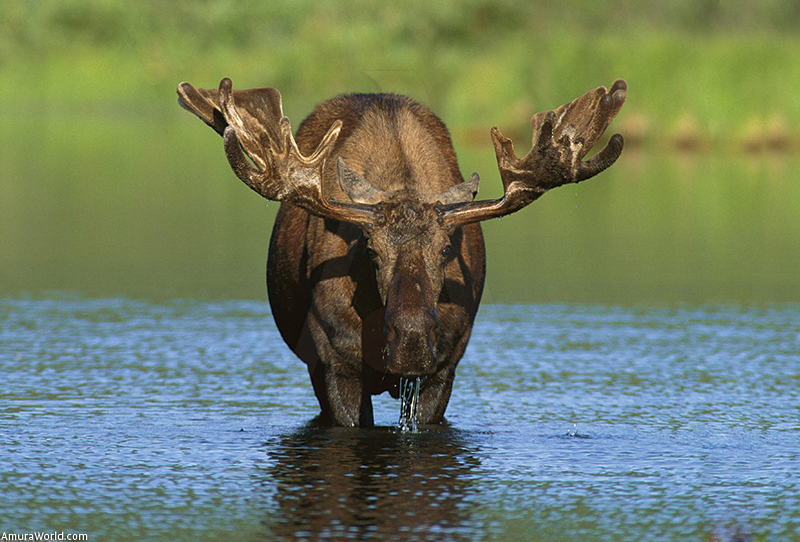 Due to their poor vision, their activity is focused into the day and afternoon. They compensate their sense of direction with highly developed senses of hearing and smell.

They might be dangerous during the rutting season, even for men, so they cannot be regarded as entirely pacific and friendly animals.

The female tends to protect and defend her calves. They are able to stand and walk after their mother in three days. The young moose is used to keeping with its mother up to the following
mating season.

The rise of its reproduction rates enticed hundreds of hunters to Anchorage, since it is easy to find them roaming around the city. Sometimes, hunters also use the death by hunger or illnesses because of the same situation.

Car collisions in the city limits also provoke a yearly decrease of 130 moose in Anchorage.

Continuing with the family Cervidae, we find the Rangifer tarandus granti, known as reindeer above all in Europe and as caribou in Alaska. 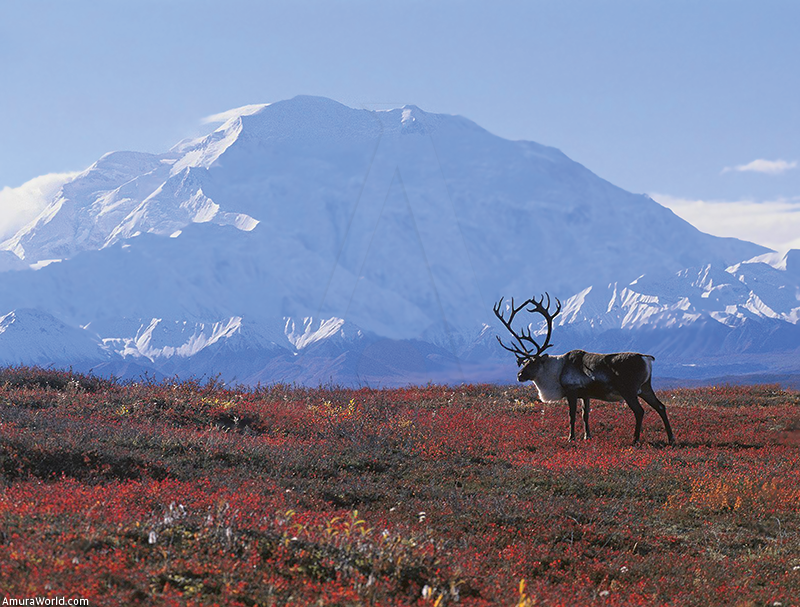 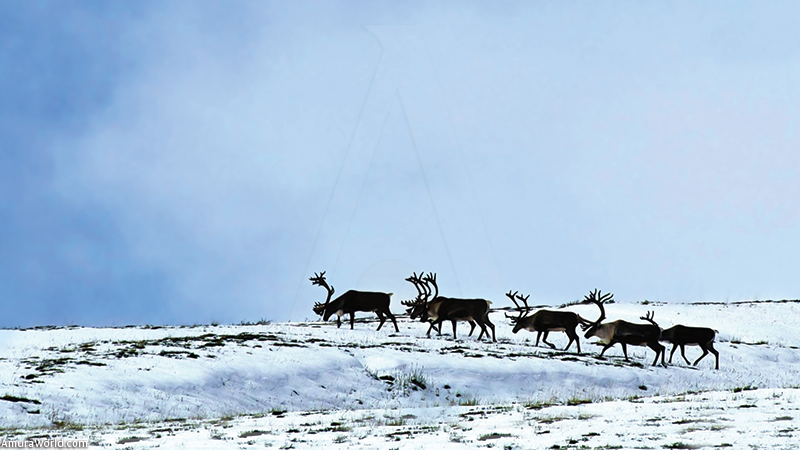 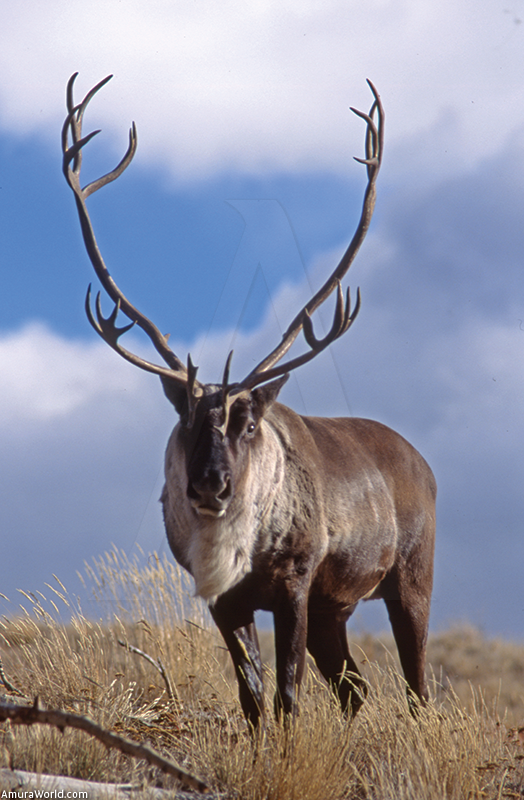 The caribou species abounds in Alaska; people distinguish it from the reindeer by regarding it untamed. The caribous usually inhabit the tundra, mountains and places with a few trees.

Its characteristic feature is that, unlike the rest of the Cervidae family, both sexes of this species have antlers.

The caribou has big concave hooves that allow it to move with greater ease through the snow and hold onto stones or ice; or dig food out. The caribou is resilient to carry its own weight and to drive its own swimming.

Both males and females have velvet antlers; being in the adult females shorter, thinner and more lopsided, though.

They are migratory animals and move in big herds. They can travel up to 50 miles a day and will only deviate out of their frequent routes to seek after food.

In the summertime, they go north in one of the greatest migrations of big animals. It may be quite a spectacle to find one in a freeway crossroads.

With the first snowfalls of the year, they go north, travelling an average of 2,500 km annually.

The males, and the calves able to stand within minutes of having been born, follow the leading herd of females that migrate first. 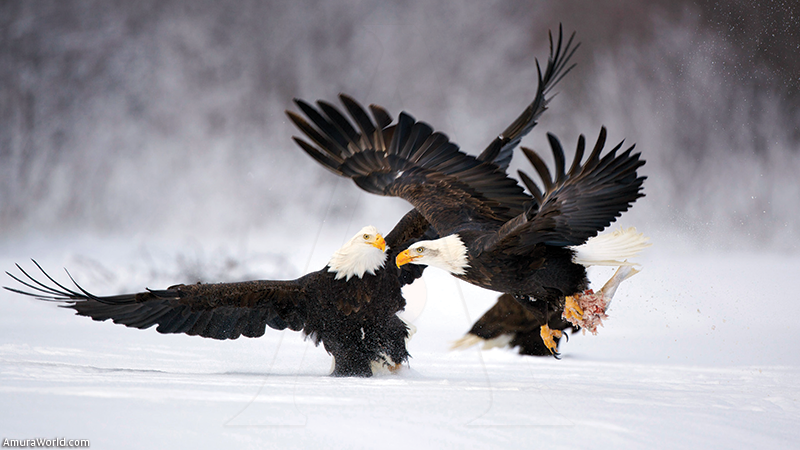 Part of the history

One of the Founding Fathers of the United States of America, Benjamin Franklin, argued against the Bald Eagle being adopted as national emblem. In a letter to his daughter he referred to this decision: “For my own part I wish the Bald Eagle had not been chosen the Representative of our Country. He is a Bird of bad moral Character. He does not get his Living honestly. You may have seen him perched on some dead Tree near the River, where, too lazy to fish for himself, he watches the Labour of the Fishing Hawk; and when that diligent Bird has at length taken a Fish, and is bearing it to his Nest for the Support of his Mate and young Ones, the Bald Eagle pursues him and takes it from him. With all this injustice, he is never in good case but like those among men who live by sharping & robbing he is generally poor and often very lousy”.

Nevertheless, the decision had already been taken, this bird became a national emblem on the 20th of June of 1782. An emblem of force and freedom, it is present in the majority of the official seals and in several coins.

The Bald Eagle or American eagle is widely recognized due to the white plumage covering its head and part of its tail. Its population is distributed all around the American Continent, from Alaska and Canada to Northern Mexico. During its youth, it is easy to confound it with the Golden eagle, for its characteristic white feathers appear until it has four or five years of age; when it reaches its sexual maturity. Large birds; their wingspan could reach up to 2.5 meters that can be appreciated in its maximum splendor when they are in full flight. 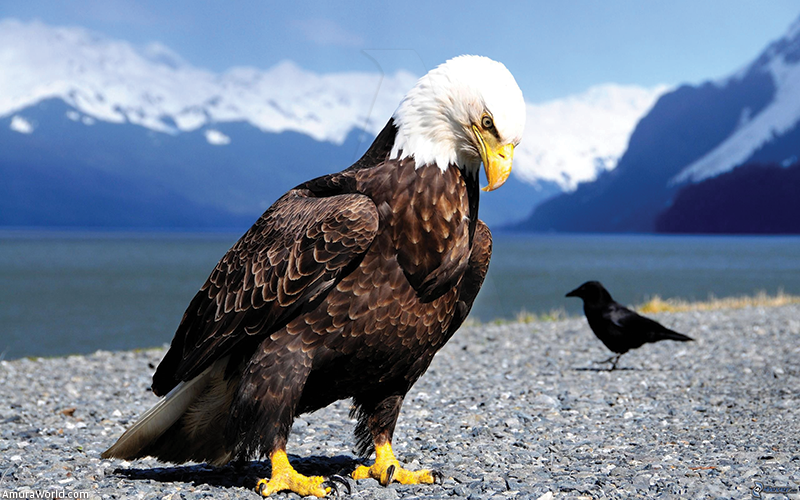 Solitary birds, rarely they are found in groups; this happens above all when they are nesting; male and female build their nest together. The nests are usually huge and found generally near a watercourse; the largest one ever recorded was about 3 meters wide and six meters high, weighing a little more than two tons.

The eagles and Native Americans

For many Native American cultures, the Bald Eagle is a holy animal; they believe that it flies higher than any other creature, being thus closer to the Creator; as stated by Robert Holden, Deputy Director of the National Congress of American Indians (NCAI), when they applied to the US Fishing and Wildlife Service (FWS) for a permit to kill two specimens for religious purposes. Some tribes wear the feathers in sacred ceremonies or as a symbol of honor for people who accomplish a great feat. 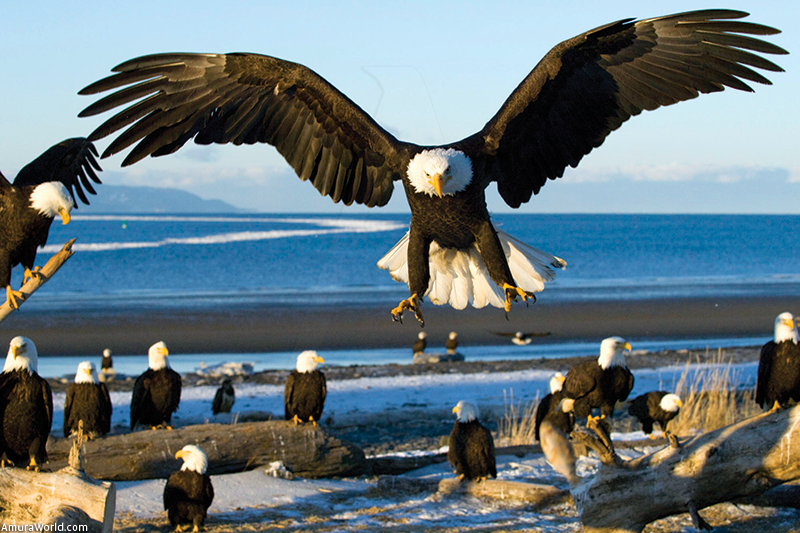 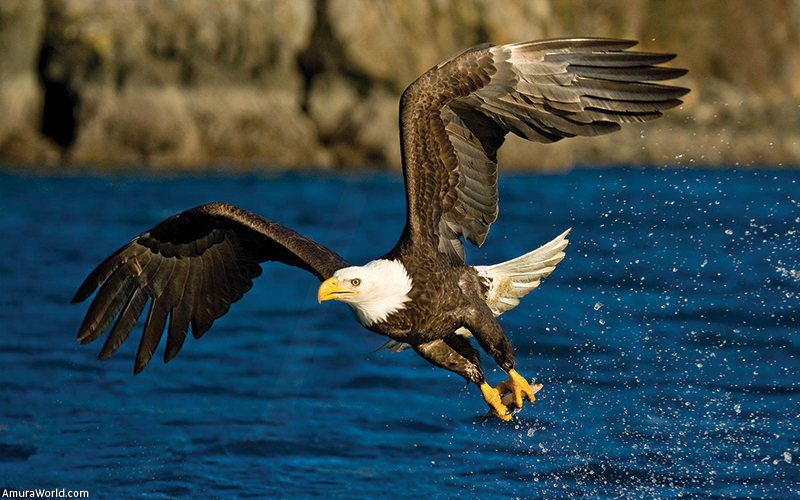