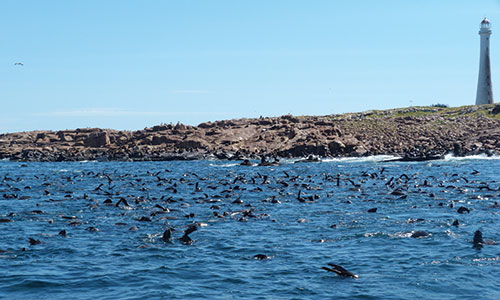 An experience at Isla Lobos

We gathered very early at the SCUBA DIVERS URUGUAY center, this place is located near  “Los Dedos”, it’s quite an iconic monument in Punta del Este. The morning was beautiful, typical during the summer in these latitudes; the sun begins to come out and the sky is clear of clouds, an enjoyable navigation is promised.

The diving center is a small place, we’re greeted with a cordiality that is very distinguished amongst Uruguayans, several of them, have their “mate” and share some biscuits; laughter is always accompanying this ritual. Our gear is given to us, each must build its own, while we get to know the guides and fellow divers from different parts of the world, we are eager to live this experience at the surroundings of Isla de Lobos. 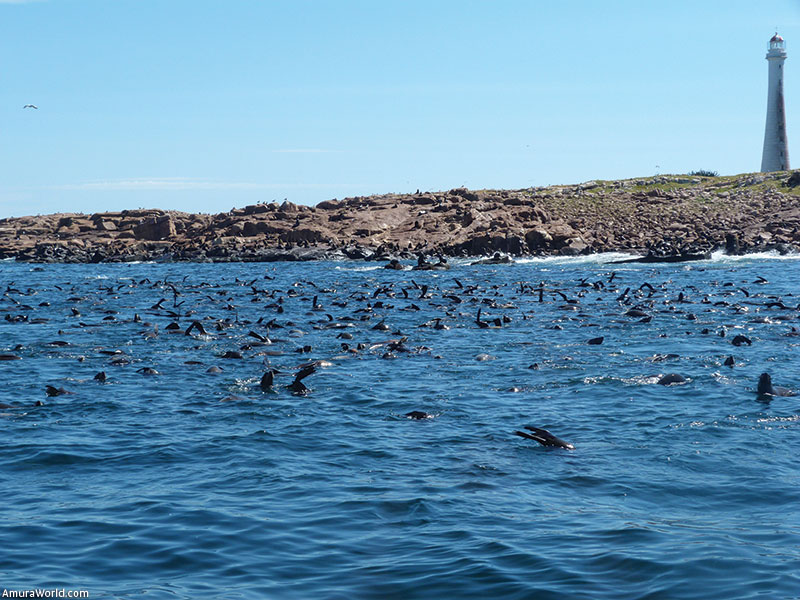 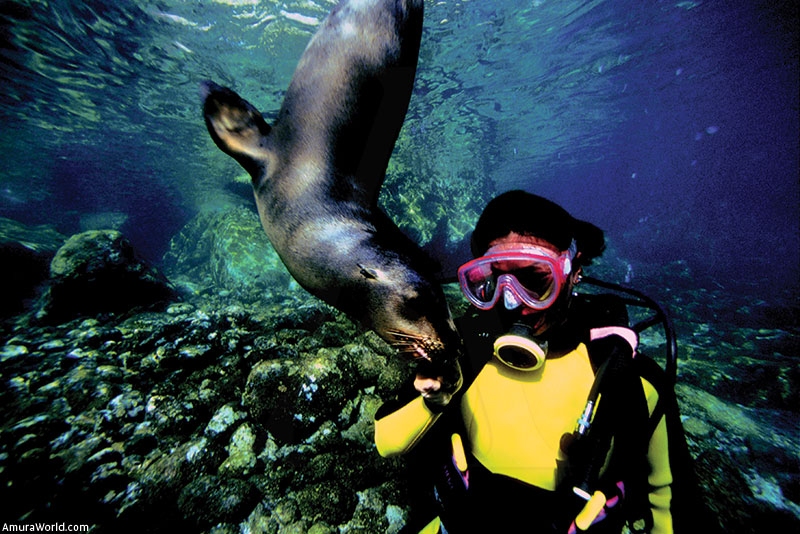 At the diving center we are explained that besides having the possibility to meet local divers of the region, several people from remote parts of the world come too; they also give service to those who wish to go by private charter. In my case I did meet local divers, as well as Argentinians, Brazilians, North Americans and three Romanians.

As soon as we have our gear on, we are ready to go to the shore of Punta del Este, the vehicles are ready to go and our destination is only five minutes away; we unpack the equipment and carry it to the boat.This vessel is of 12 meters long and has two floors, the crew is composed by a sailor and a captain, who help us with our gear and gently greed us. The 15 passengers take our seats and we are on our way to the island.

During the trajectory a story was being told, regarding the shipwrecks and the way the life of the sea lions, which is really thrilling. The journey lasts about 50 minutes and as we approach we can see the animals are swimming right next to the boat, as we were being welcomed by them!

When we arrived, the crew and guides chose a calm place for us to enter the water. The guides give us a very detailed briefing in english and spanish; we are assigned partners and once this formalities are over, it’s time; we are going to dive.

We enter the water one by one, with the help of the crew we approach a buoy and await for the whole group. We must submerge to have an encounter with the sea lion from up close, we were asked to not dive toward the island; it’s a natural reserve and getting near is prohibited by the law. These type of waters in specific are quite easy, the maximum profundity is of 10 meters and we have been recommended to not move a lot, the sea lions will come to us, and it was true. 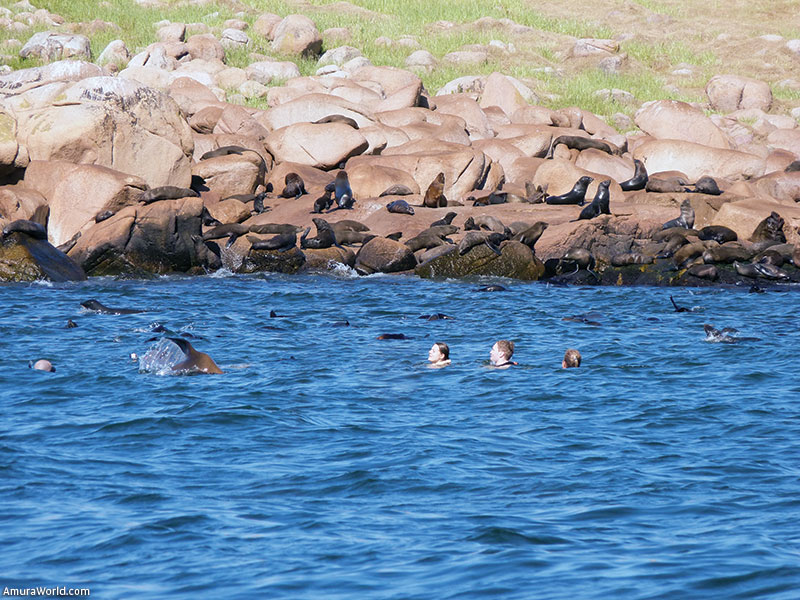 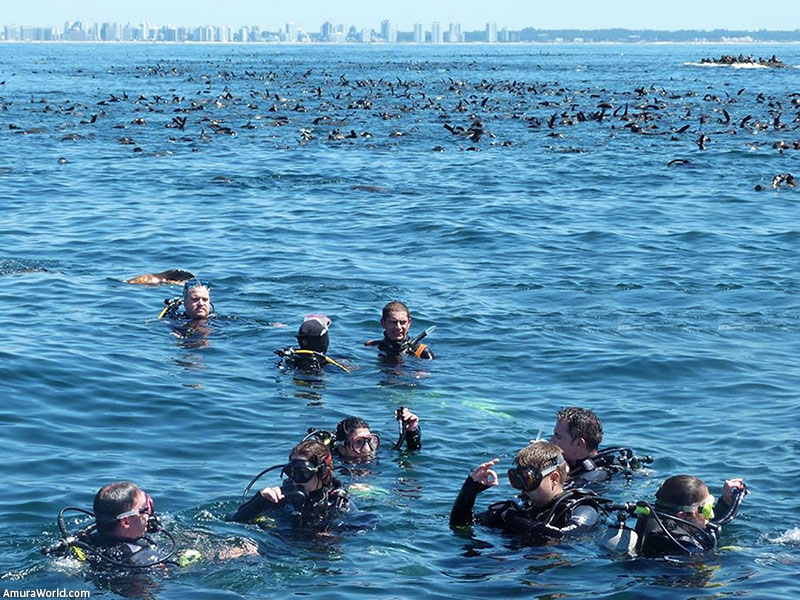 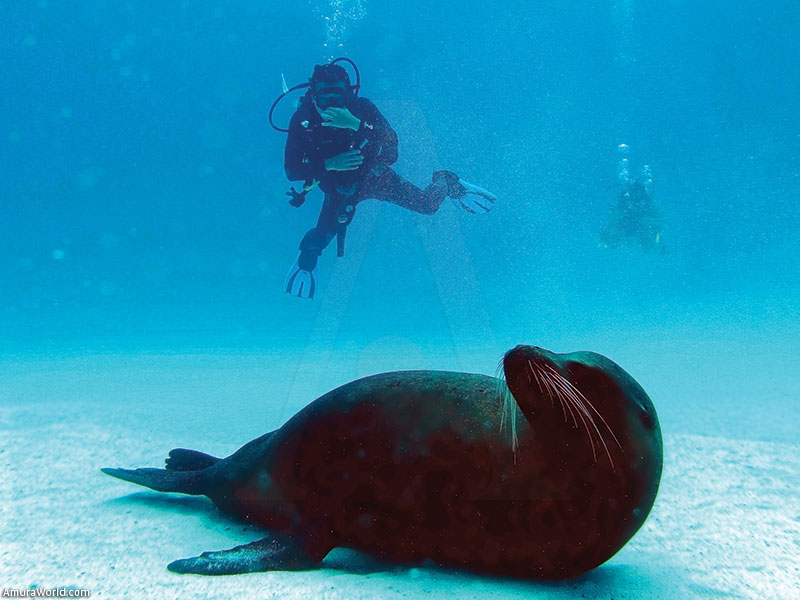 As soon as we began to descend we saw figures that passed swiftly by our side, the average visibility is of five to six meters- At the beginning you might have the impression of not seeing much, but when ascending your sight gets accustomed; the silhouettes began to take shape, and when we moved slowly the sea lions lose their caution and become very curious. The younglings, which are the less shy, are eager to approach us and bite our gear. This is already something common for them, since they had priorly explained this to us. The females - which are much more heavy and large -, are very near to us as well, they look at us in a really peculiar way. Some of the bolder mammals even approach the guide as if he was an old friend.

The bottom is uneven and mussels are attached to the rocks, some breams, which is the kind of fish that is common in these waters; swim indifferently to the presence of divers.  It is normal to see Groupers in large sizes, and obviously there is quite a large number of sea lions everywhere. This experience lasts nearly 40 minutes, they go very fast due to the adrenaline rush you feel when you see the sea lions. By this point, the group had dispersed within a few meters. Under water, my companion and I remained as they had asked us before we started this expedition, together, once they gave us the signal, we began our descent without any difficulties, we emerged 40 meters from the boat. Some divers were boarding the vessel and we directed to the surface, close to it. 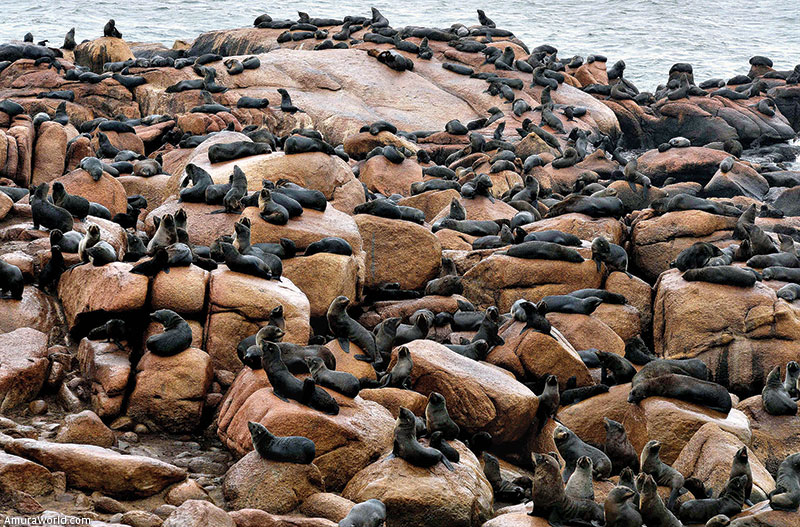 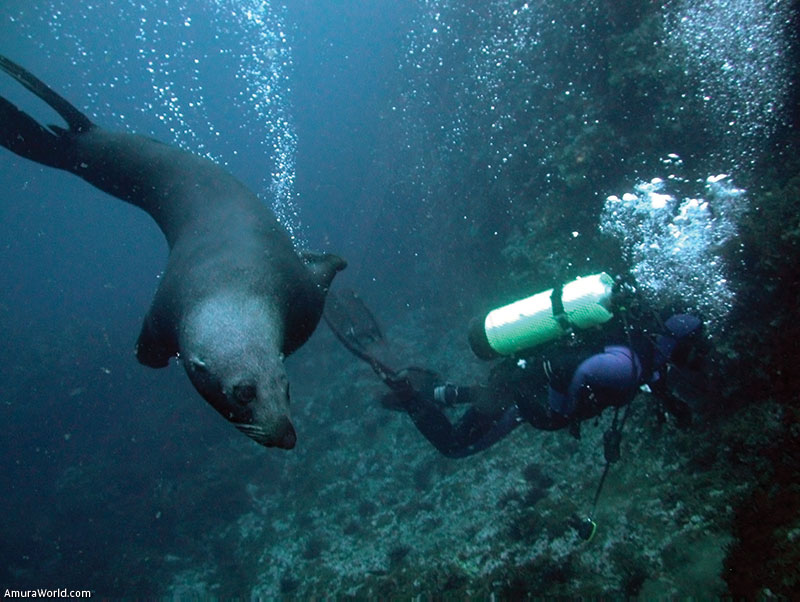 We then realized there was a group of 10 sea lions that were swimming around us, like saying good-bye. We received help when taking the gear into the ship, we were now on the boat. After the usual people count and seeing if everyone was ok, we raised the anchor and went back to Punta del Este, it’s coastline was visible on the horizon.

The return was full of anecdotes and e-mail exchanges amongst the divers so we could share pictures. The diving center also takes pictures, which greatly shares. All the divers agreed that this had been one of the best experiences we had had. “Amazing” was the word on which we all coincided.

It is a unique experience, to dice with these great mammals and with such a large quantity of the,. I am sure very few parts of the world offer this type of experience; it is so interactive. The journey back takes us 50 minutes, we are offered hot beverages and cookies and more hospitality, all amongst fun and laughter.

I am quite lucky, I have been able to dive in many parts of the globe, but after living this I am sure it is one of the best memories I have. We arrived to the port a little after midday, we still lingered with the memory of a morning that we hope will soon repeat itself. I want to thank instructor r Marcos Pietrafesa and the Divemaster Pablo Pioli from SCUBA DIVERS URUGUAY, for showing this place full of wonders and marvels.