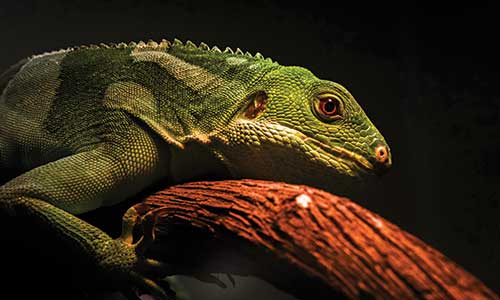 The Most Enigmatic Species from Polynesia

Iguanas look like creatures from a time when reptiles dominated Earth. This is true; since the remote Pleistocene, they already roamed the planet.

Considered one of the most beautiful lizards in the world, the Fiji Banded Iguana (Brachylophus fasciatus / Brachylophus bulabula) is endemic of this nation and can also be found in other regions of the South Pacific, like Tonga and Vanuatu. Locals have come together in recent years to contribute to the protection of this species and now it is considered a Fijian national treasure.

The banded iguana is an arboreal lizard that inhabits forests and swampy coastal areas. They are good swimmers as well, and they are believed to have evolved from iguanas that migrated to the South Pacific through drifting debris from South America. They are more slender than other iguana species and can grow up to 80cm, and weigh around 1.8kg. Males are known for the bluish-white bands that circle their green bodies—trait from which they get their name—while females are usually a variety of uniform green. Both have yellow underbellies and nostrils, and a small crest (0.5cm). 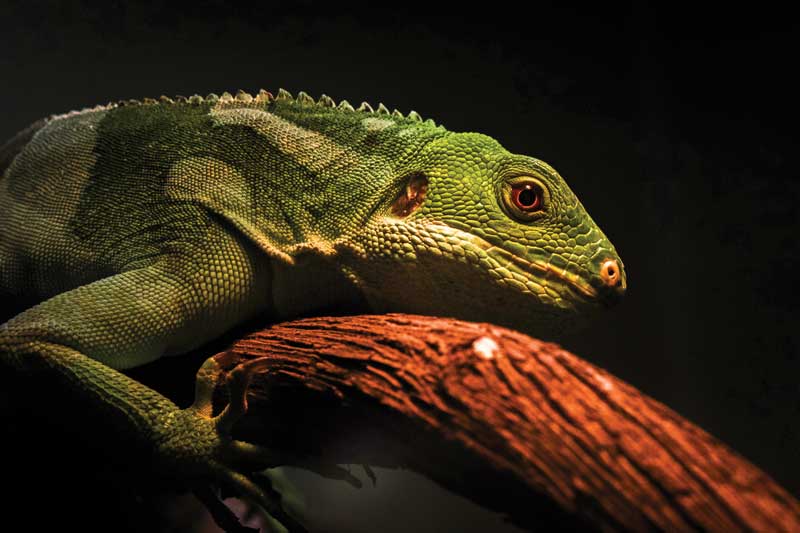 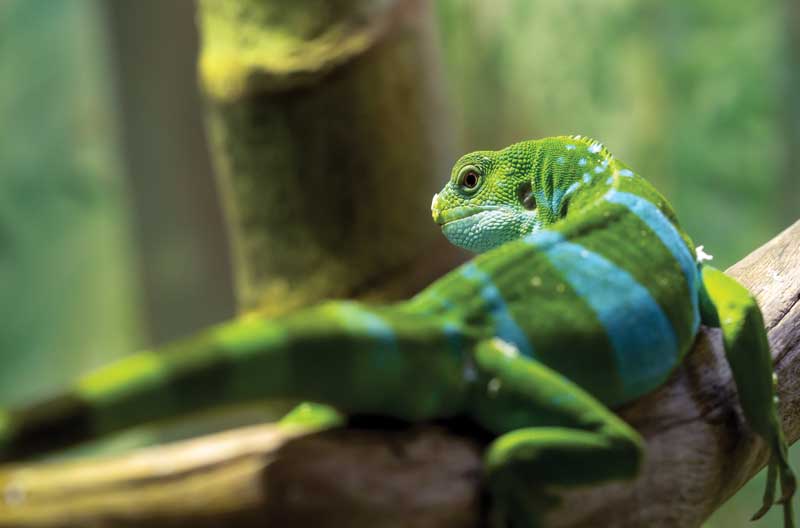 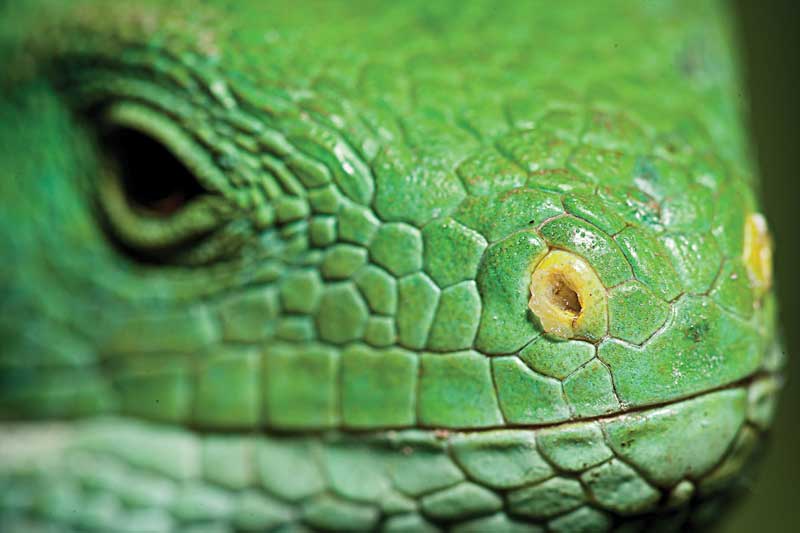 Mostly herbivore, they feed during the day on fruits and plants, though they do eat insects occasionally, and at night they find shelter on treetops to protect themselves from predators. On sunny afternoons, you may find these lizards sunbathing or defending their territory, since males tend to fight for dominance. Their skins are photosensitive and change to a darker color when threatened, but it can also experience changes depending on mood, light and temperature.

The loss of forests due to overfeeding goats, fires and the expansion of agriculture have contributed to the depletion in the Fijian iguana population. The introduction of the Small Asian Mongoose (Herpestes javanicus) poses a threat for this species as well, along with other carnivores like feral cats and rats that prey on hatchlings and eggs. The banded iguana is red-listed by the IUCN as endangered since 1996 because their numbers have decreased approximately 50% in only a few decades. 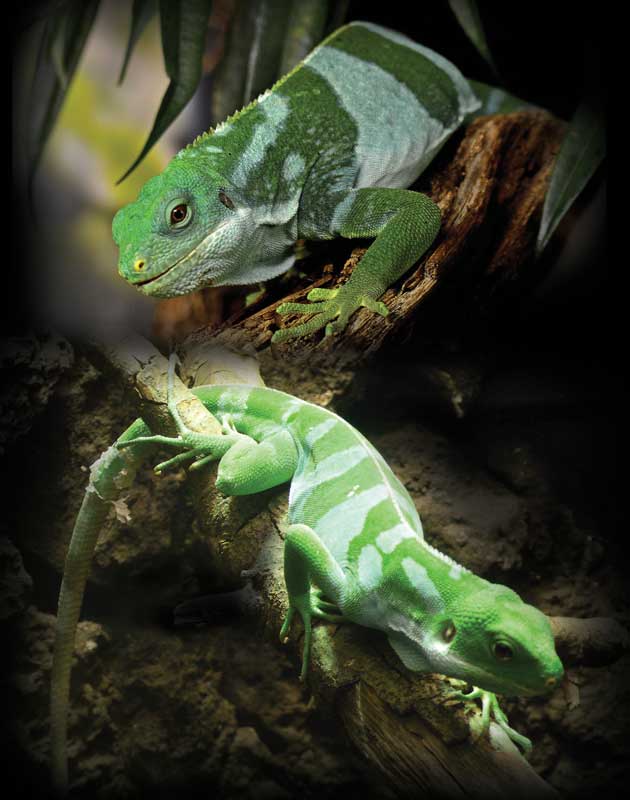 Fiji implemented new currency symbols 25 years after its Independence, replacing Queen Elizabeth II with plants and animals—the banded iguana among them—to promote an identity of their own and their environmental pride

However, this iguanid lizard thrives in captivity, which is why several captivity breeding programs have been created in conservation centers such as the Fear-No-More Zoo and Kula Ecopark, plus they are under the protection of Fiji and international laws. The banded iguana is elusive in the wild, and researchers have a hard time studying their interactions and behaviors outside of captivity; they are excellent at camouflaging and hiding in plain sight. But they have observed specimens in captivity and determined some social behavior patterns, like head-bobbing and color-changing as a means of communication under different circumstances. An example is the changes a male undergoes when it meets other males in comparison with the low contrast between the bands and the green background while sleeping. Additionally, their long claws allow them to climb high up the trees, and during breeding season, females lay four to six eggs and cover them with soil until it is impossible to tell where they were buried. The eggs will hatch between 120 and 170 days.

In Fijian culture, the iguana is called “Vokai”, while some tribes call it “Saumuri” and is totemic to them. People used to fear these lizards because they are capable of turning almost completely black when they become aggressive, which has influenced myths where the iguana plays a villainous role and stories where they jump from trees to attack villagers. Conservation efforts have changed that reputation by letting children interact with them, demonstrating iguanas are mostly harmless and raising awareness of their vulnerability instead. Locals have participated in the endeavor to restore their habitat, reduce threats like predators and alert authorities about possible poachers. Now the species is deeply respected and honored; it is even featured on stamps and local currency. 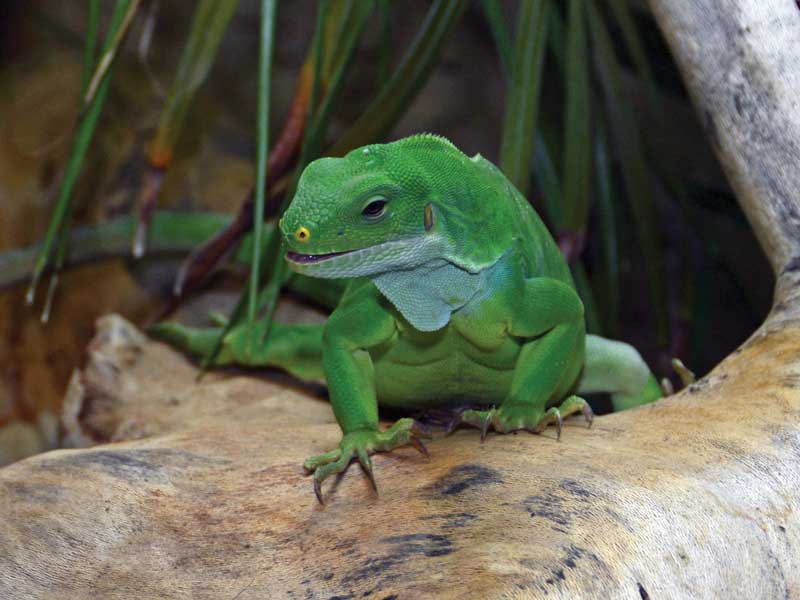 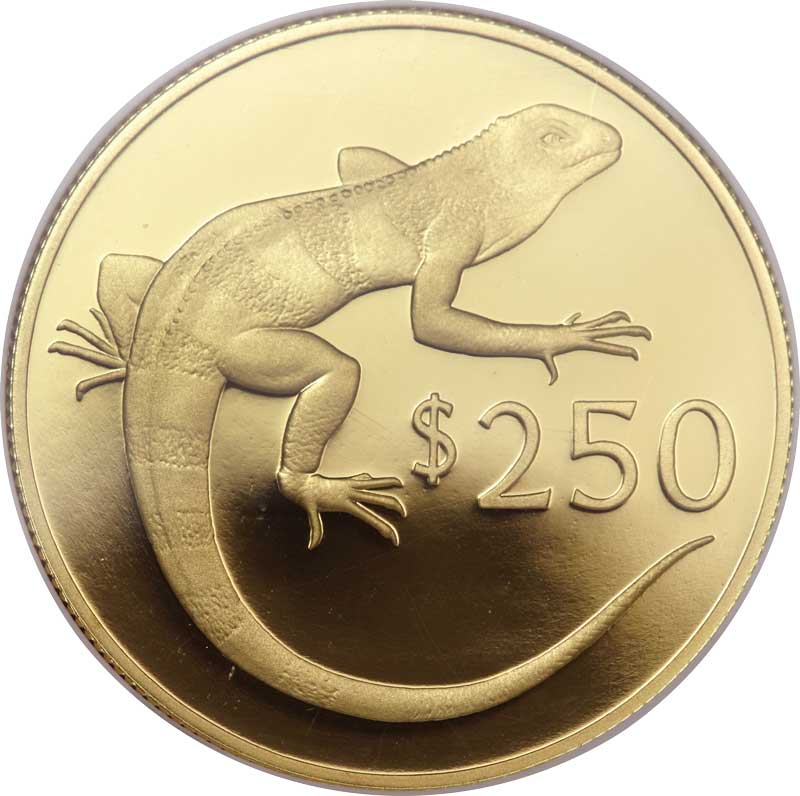