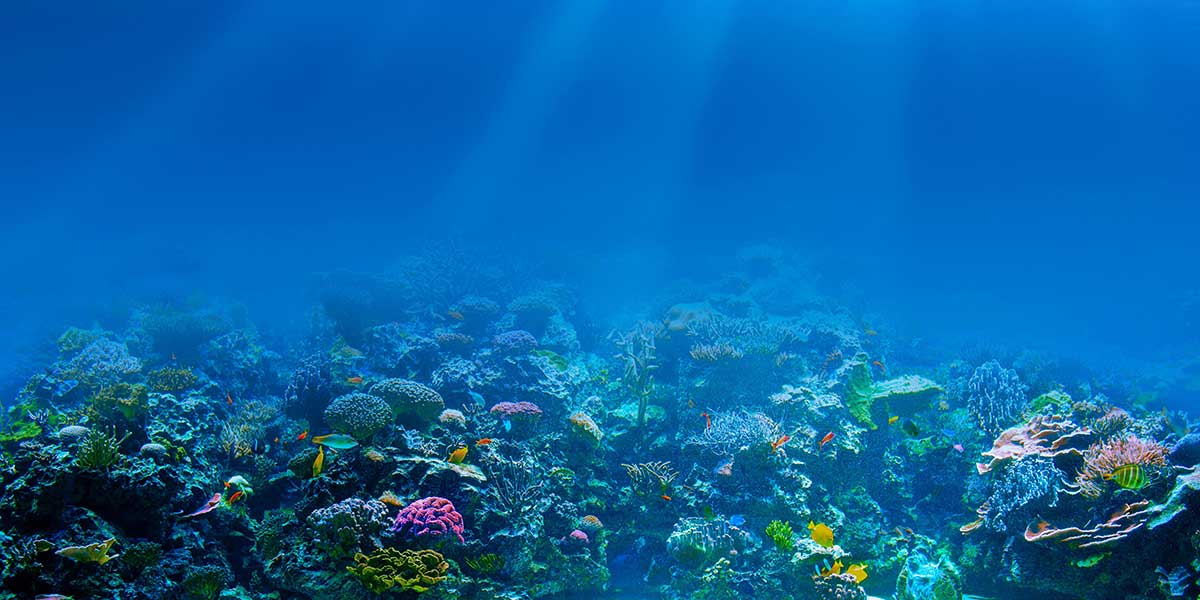 The real luxury is peace, time and space in voyages thru into itself and nature.

In the Maldives, life flows splendidly in its two unique habitats, the marine environment and mangroves where thousands of species live, dolphins and whales, dwarf sperm whales, killer whales, and the world's largest fish: the whale shark that reaches between 18 and 32 feet in length; 400 species of mollusks, 83 species of echinoderms, about 1,100 species of fish.

Coral is its most relevant species, and these coral colonies form the terrestrial territories on which the mangroves grow. Maldives is a sanctuary for migratory and endemic birds.

The coconut is the symbol of life in the Maldives, also important for ecology, as its roots hold the earth in place. In the region every part of the plant is used. The Maldives coat of arms and flag include images of it. 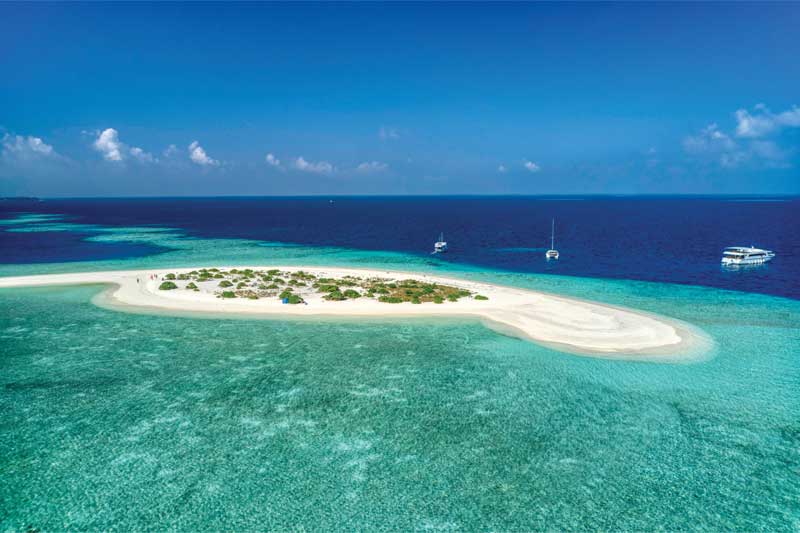 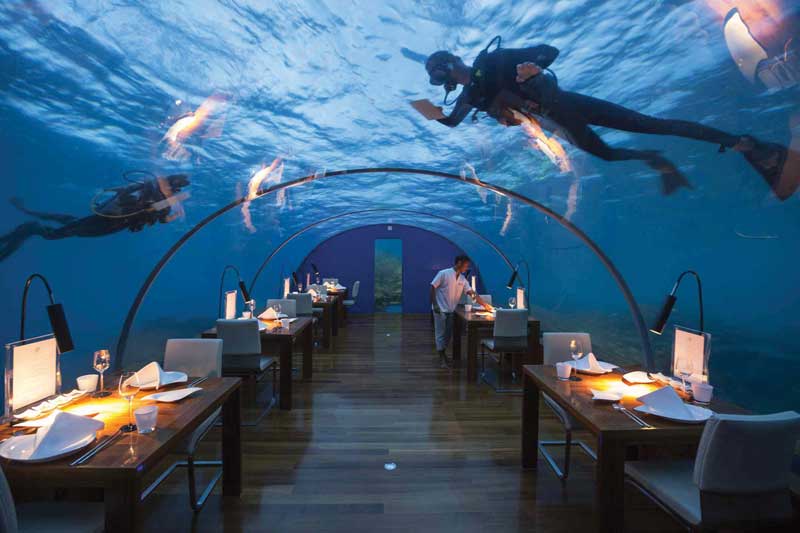 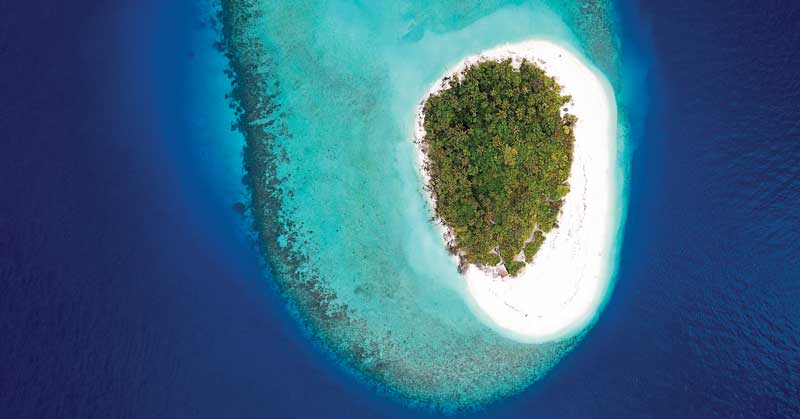 In the Maldives a survival system has been created due to multiple factors, first of all, the rising sea level that has already critically affected them, having to implement emerging plans to stop or, if necessary, alleviate the devastation of their land.

Climate change directly affects coral colonies. The danger was so imminent in 2008 that the Maldivian government reportedly sought to acquire land in India, for which they contemplated creating a savings fund. In 2009, the authorities held a meeting under the ocean to draw the world's attention to the fact rising waters are being caused in every corner, and the human species does not seem to have learned from the facts that accumulate in an endless list.

With this very real prospect, since according to scientists the sea level will rise by one meter by 2100, this could only be avoided with universal awareness and immediately.

Maldivians have had to take resilience actions such as the creation of floating cities on the ocean, independent of land, built from marine substrates created with digital technology, cities of which there are some examples in the world. They have also carried out the recovery of some Islands through various techniques. 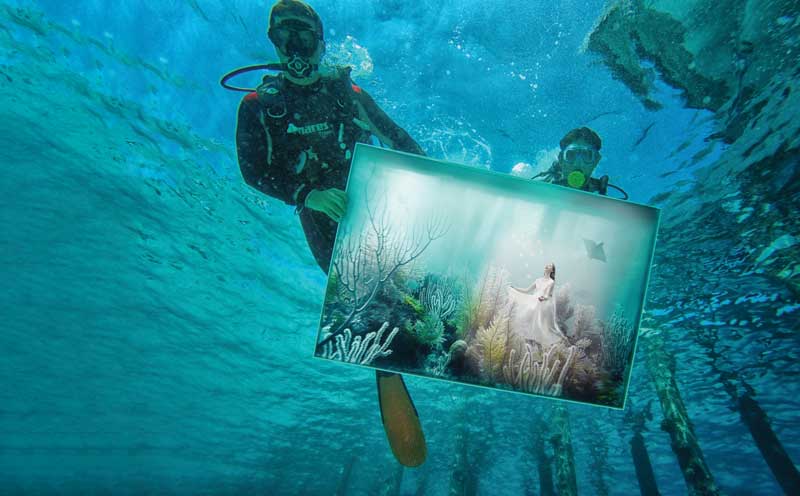 The marine environment and mangroves are the unique habitats of the Maldives. 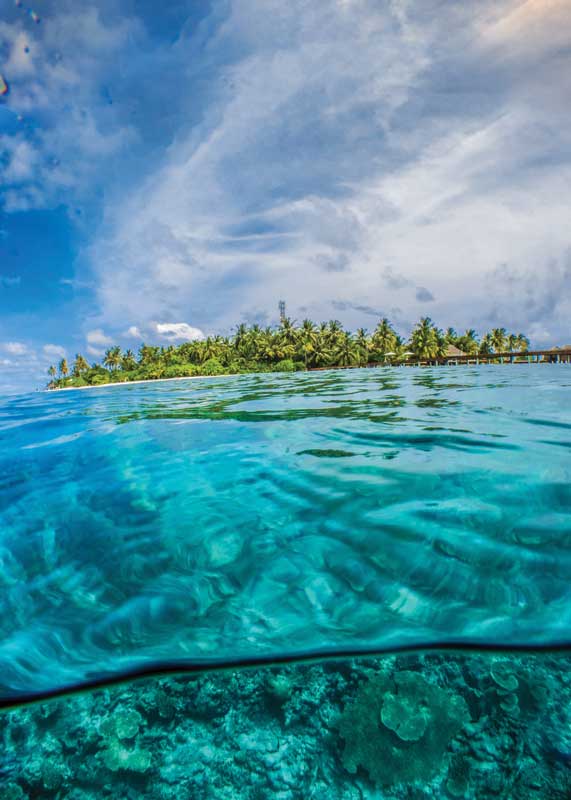 The marine environment and mangroves are the unique habitats of the Maldives.

Cities over the Sea

Creating floating cities and adapting to living on the sea is a reality in Maldives. Hulhumalé known as the “City of Hope”, was built on an island recovered by extracting millions of meters of sand from the seabed; this city is over two meters above sea level and has been built with a sustainable urban vision, considering that a third of its electricity is produced with solar energy and the fresh water is recovered from the rains during of the two monsoons.  It is described as Asia's first 100% smart city. The recovery was supervised by the Korallium Lab Marine Station and Kathe Philpot, senior ecologist as the British consulting company Ecology by Design. 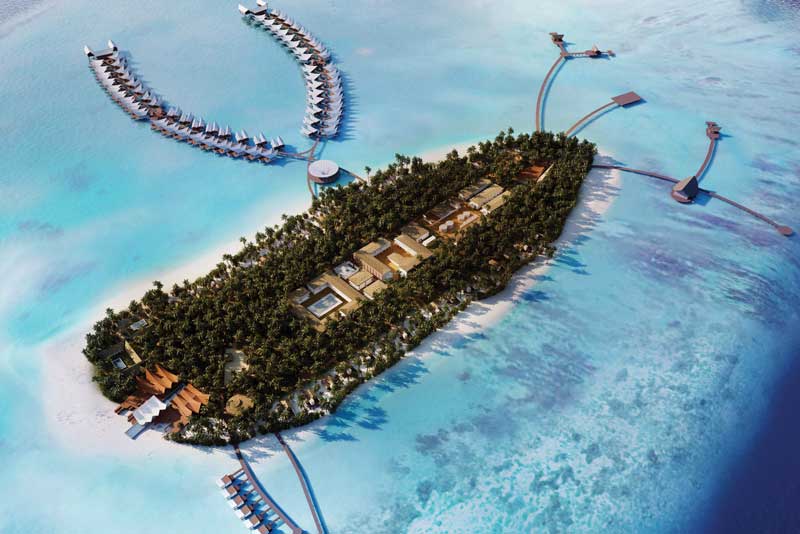 The Maldives also survive under the sea. 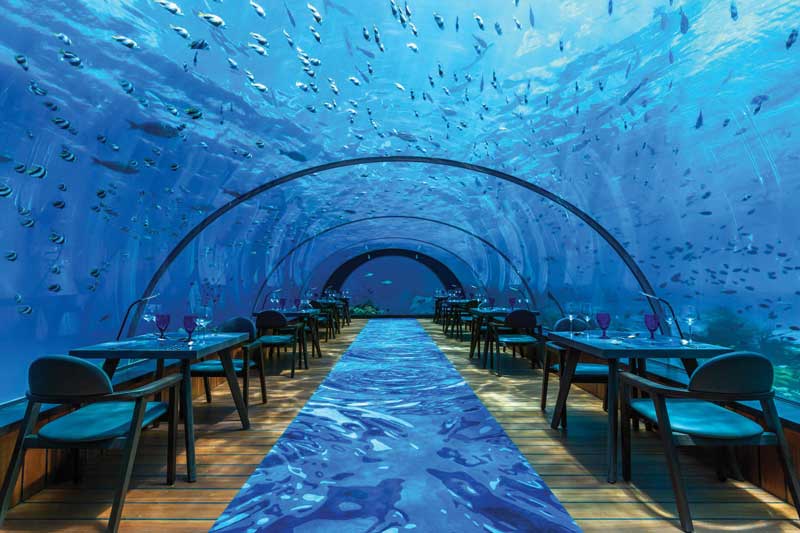 Creating floating cities is a reality in Maldivas. 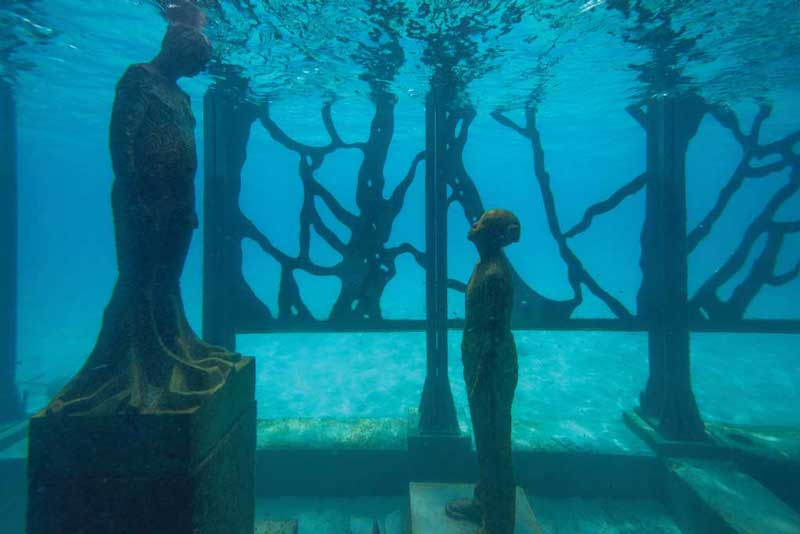 Creating floating cities is a reality in Maldivas.

The Hydrous, "Open Access Oceans" brings together a collective of scientists, divers, filmmakers and designers to visualize living spaces above the sea and design solutions, conduct local research on the health of the seas and reefs, as well as an awareness campaign that engages a real interest in the oceans.

Between the Fairmont Maldives Sirru Fen, and artist and environmental activist, Jason DeCaries Taylor, they created the Coralarium: an underwater sculpture park and sanctuary located in the Shaviyani Atoll inspired by all this as a place of preservation, education and conservation .

There are numerous recreational sites built underwater: restaurants, suites, nightclubs, among others, which are a sample of the creative adaptation to this necessary coexistence with the sea.

The Soneva Foundation supports projects that generate positive impacts environmental, social and economic impacts through carbon credits to finance programs in various places, and to offset the emissions produced by the resorts and the transportation of guests in this case at their resort in Maldives, Soneva Fushi.

To do this, they work with governments and other organizations to create a shared and expanding policy. Benefits include: providing clean drinking water to 750,000 people worldwide. 500,000 trees have been planted in Thailand, which means a C02 mitigation of 250,000 tons, among others.

They are among the pioneering eco-luxury resort in sustainable tourism. At Baa Atoll, a team of passionate, activist and master innovators collaborate to create a thriving community that is proactive with nature. More than owners, they describe themselves guardians of their space, and offer, in addition to tailor-made experiences, an option for discovery.

At Soneva they have created the first wind tunnel to recycle glass waste (50 tons per day) to transform it into works of art, some made by the guests themselves who learn to blow glass in the workshop-gallery-shop of the resort.

Raising awareness about the leading role that we all play in the 2021 results. 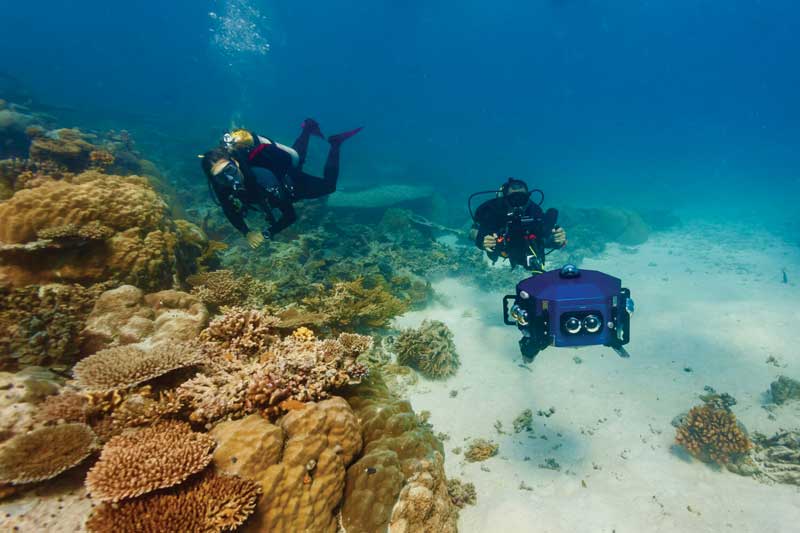 Collectives of specialists have come together in search of solutions. 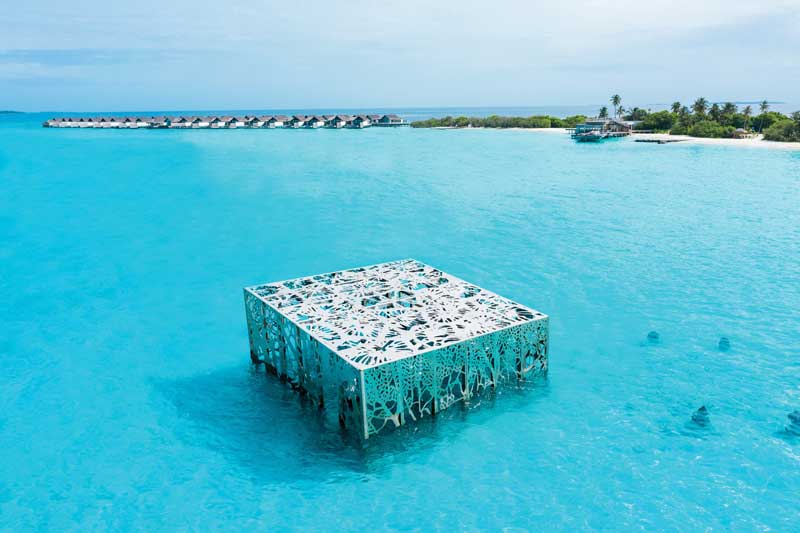 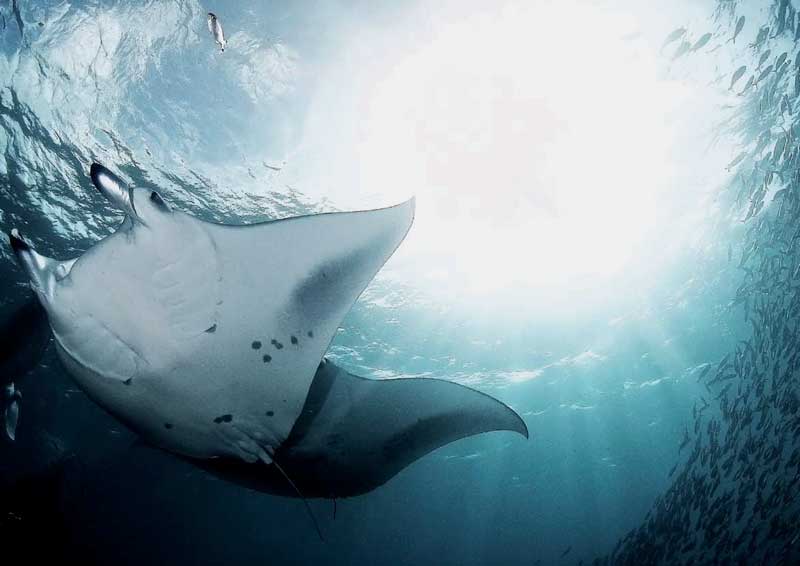 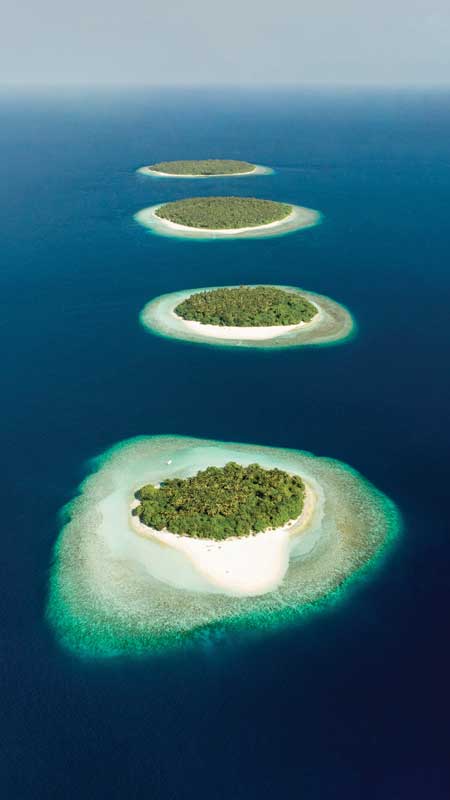