An encounter with the super fish

Recently, I first heard about the hunt for sailfish in the waters near Isla Contoy. Being a bit skeptical, initially hesitated to go after them. However, my friend, restless Armando Gasse, did not give up easily, and stubbornly continued to come out in its search. We made two or three attempts without success in its location.

By January 2009, we plan a fishing trip with my son Rodrigo to a place where they found a sunken ship. Capt. Remigio had the exact location and insisted on taking us to be the first to explore and document it. 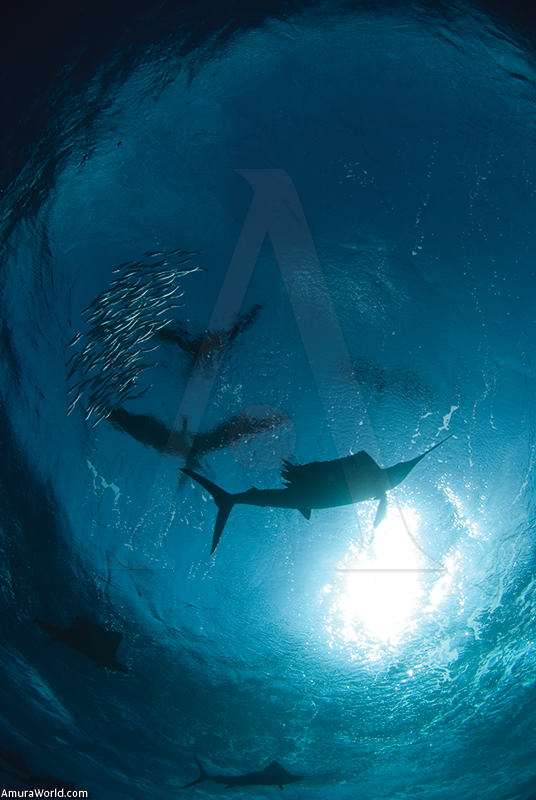 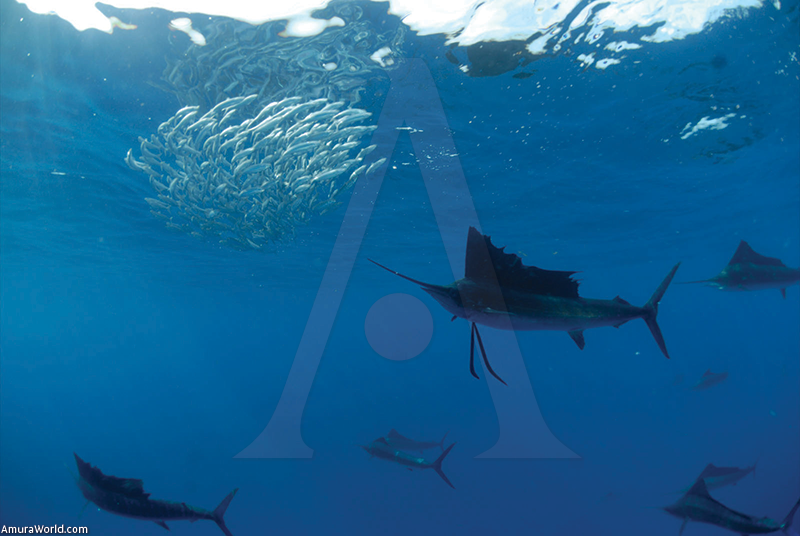 The wreck is located at 56 nautical miles off the coast of Cancun, so we decided to leave early, leaving the boat prepared from the previous day. The crew for this expedition is formed by the captains Remigio and Gabriel, Rodrigo, Armando, Mauricio and myself.

We set sail north, leaving Isla Mujeres quickly. This time I have with me a fisheries expert who is also an expert on the behavior of the weevils, better known as Gregorio “Goyo”, an enthusiastic man of the sea. In addition, two of my captains united, Gabriel and Remigio. Armando and Harris complement the group for the expedition. 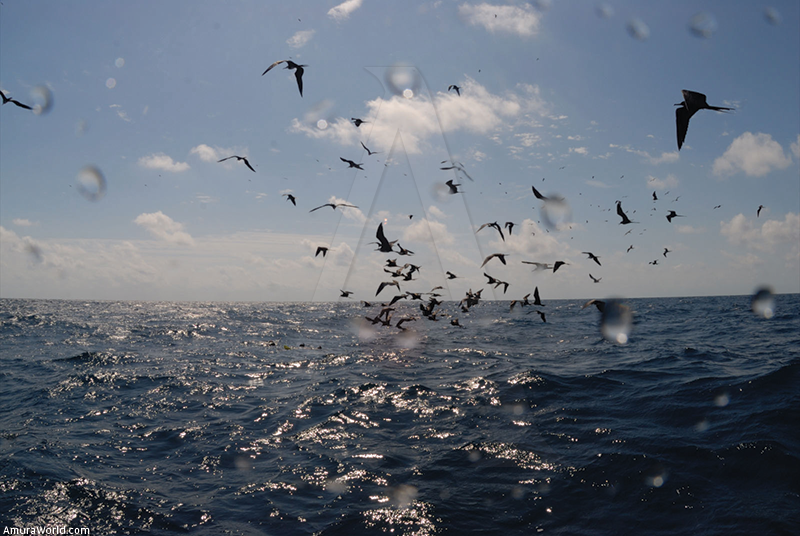 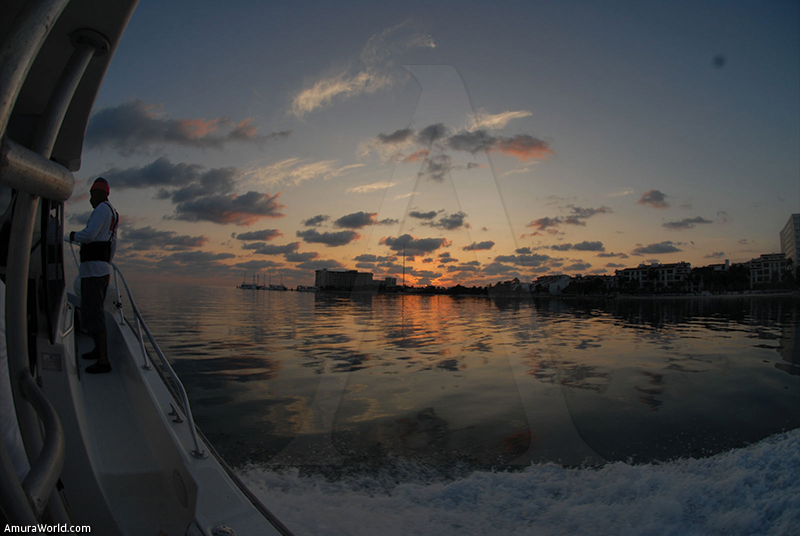 With great enthusiasm, we are ready to find the sailfish. Goyo does not take long to catch a glimpse of the birds eating, the signal that lets us know the location of these majestic fish. With a smile, prepares us to get to it.

Rather than jumping into the water, we slipped overboard and started swimming toward where we’re headed with loud cries from captain Gabriel.”Go ahead, Don Beto, ahead” there you’re going to find it. In the distance, just make out a lot of activity on the surface of the sea. Suddenly, everything stops and the great school of sardines dances in front of me. I watch the pod opens the way to a large sailfish, majestic, shows her huge sail and its bright colors with pride. 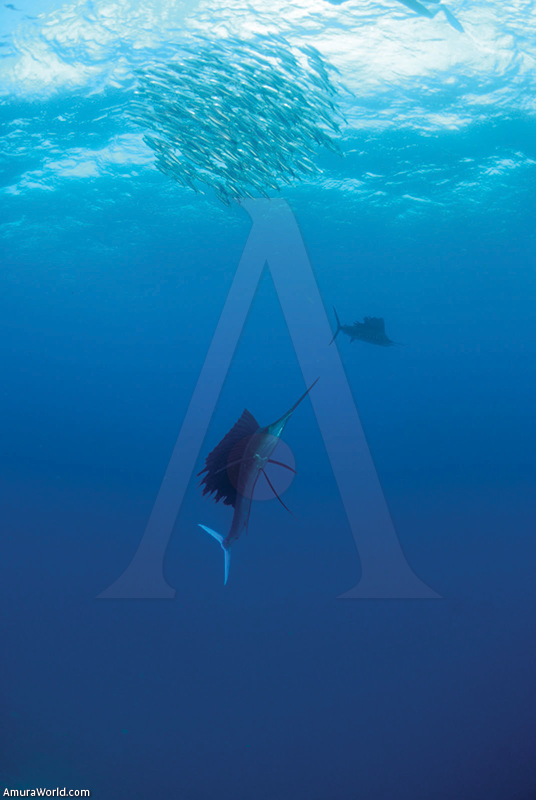 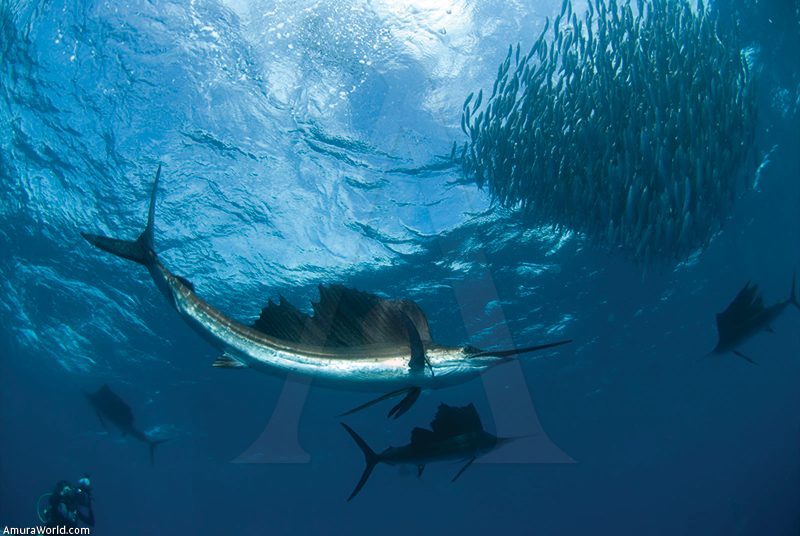 The huge fish passes by me and disappears in a moment, registering in the lens and in my mind forever. But this was no time for meditation, the action continues later. Armando and Harris are ahead of me, having to use all my energy to catch up with them.

Spend a few minutes before the grand school gets to a complete stop again, giving us one of the most impressive performances: sailfish in full chase. More than feeding itself, it seems to run a beautiful water dance. I look at the colossus, which can reach up to 2.5 meters from tip to tip, driving their prey to the proximity of the surface to eat them more easily.

With the help of its peak, the predator makes its way through the group of sardines to create a smaller cell, which is more controllable, since the prey zigzag to avoid being captured and protect themselves within the group moving at high speed and as a single unit. 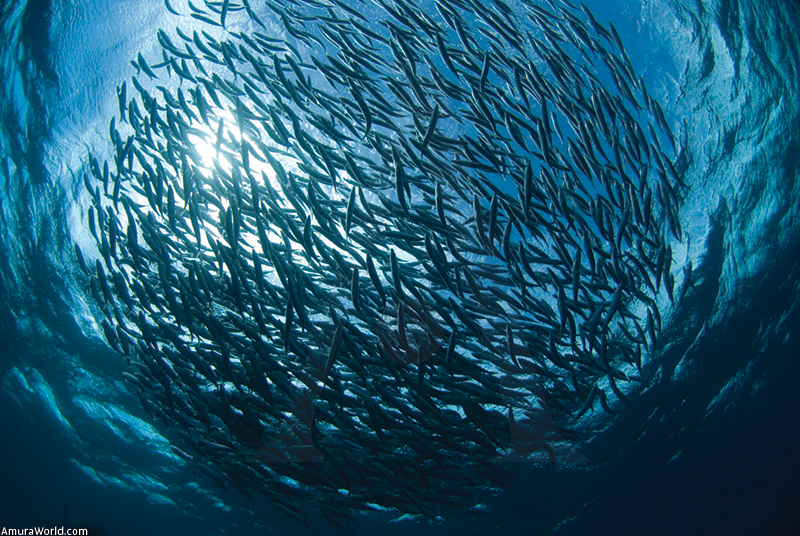 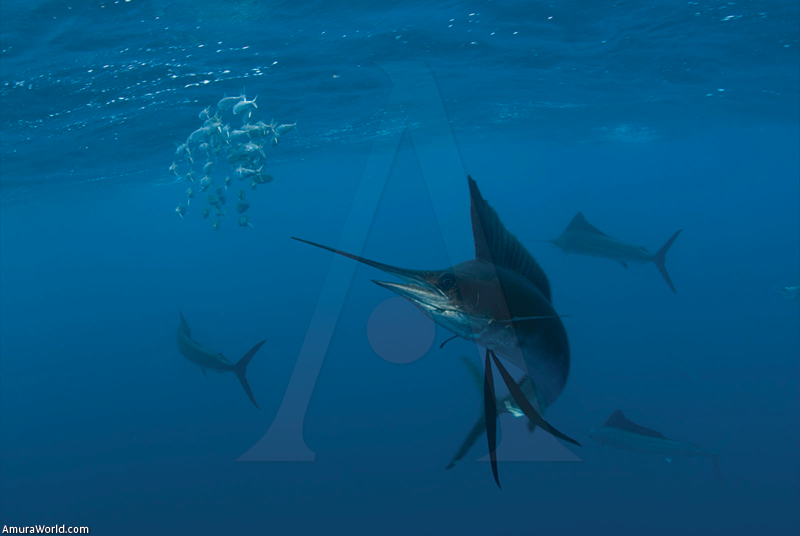 Once again I´m lucky to witness this dance, as both sailfish and sardines are migratory, and their populations are widely distributed in various oceans. But from January to June, the winged Istiophorus and Sardinella aurita are found fish to fish in this seabed. Both for the predator and the prey, the continental shelf is the perfect habitat. The shallow waters are rich in plankton, and ocean currents between Cuba and Yucatan promise abundant meal.

The hunt is adorned with a beautiful and lethal change in the predator. Sailfish, who often travel separately, join forces. Each attack is accented with a stunning flash of dorsal fin, which is more than double the hunter’s profile. A flickering iridescent, often in silvery blue stripes, emphasizes the effect.

Usually, this animal looks dull but under stress or excitement get its pigment cells to expose the metal under the skin colors. This can serve not only to mislead the prey, but for others sailfish to stay away. Given their pointy noses and the speed at which they swim, this is very important. In fact, its peak is an extension of the upper jaw that bring down the prey and defend themselves against sharks and other enemies, it is sharp as a knife. 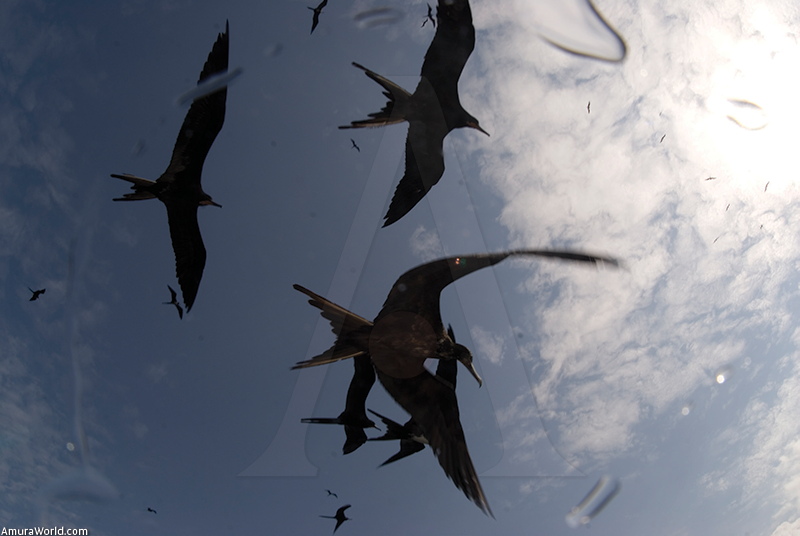 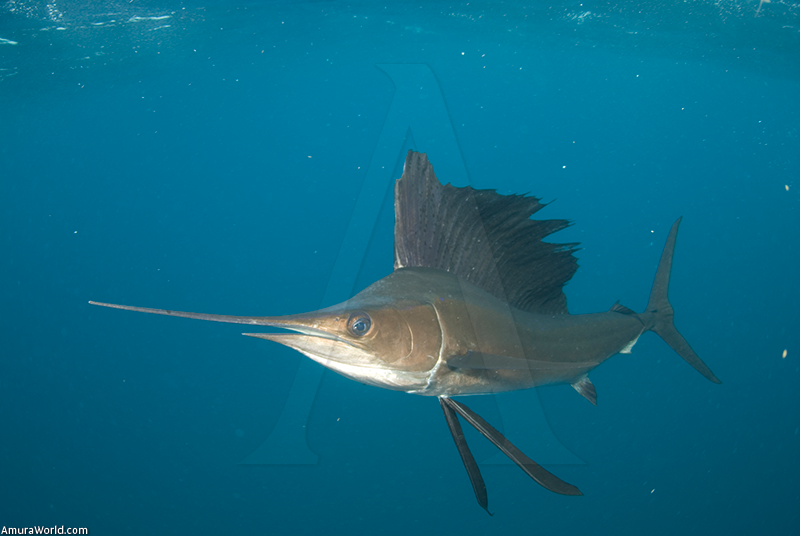 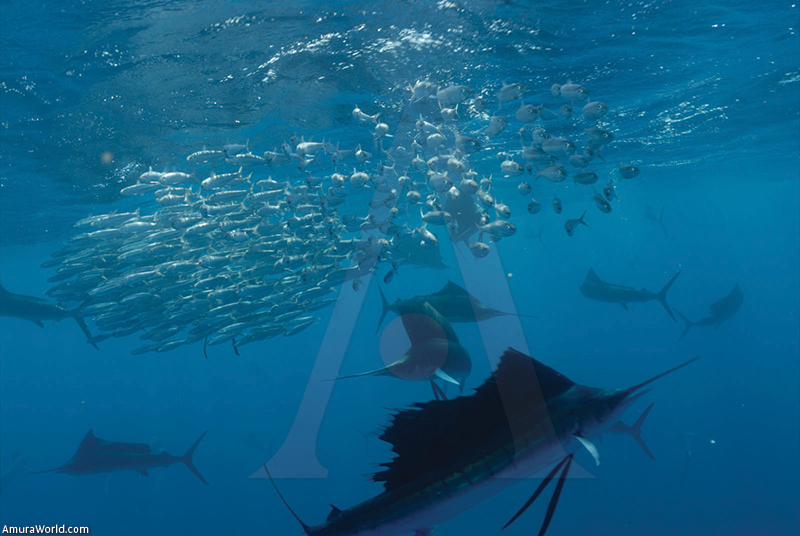 Once the sphere is under control, sailfish take turns to attack, moving their heads from side to side to strike with great precision the sardines with their beaks. Hunters pounce on the disoriented fish before they escape. Reduced to bits, the sphere of sardines slowly melts into a vortex, preys are exhausted and uncoordinated. They typically eat to the last fish. In the end, only a few flakes are detached silent testimony of a beautiful and quiet battle for survival.

So many hidden beauties were appearing on our underwater journey, leaving us dumbfounded, and even if I wanted to convey in words, couldn’t find the adequate ones. I preferred then to lie immersed in the beauty of the silence wrap. I have returned in several ocassions, but could not find the same splendor as the day I took these pictures. It is unfortunate that people know them only as fishing trophies, awards to human cruelty, instead of seeing them in their moment of glory, flashing iridescent ranges while looking proudly on his deadly hunt. 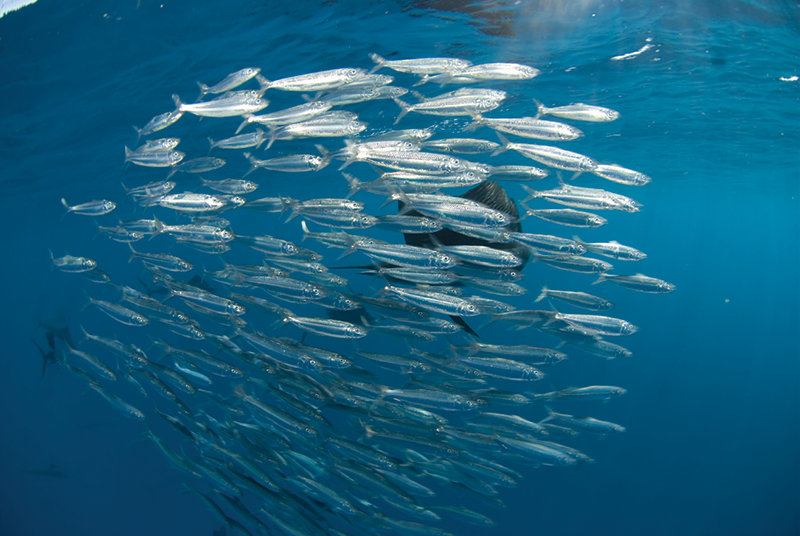 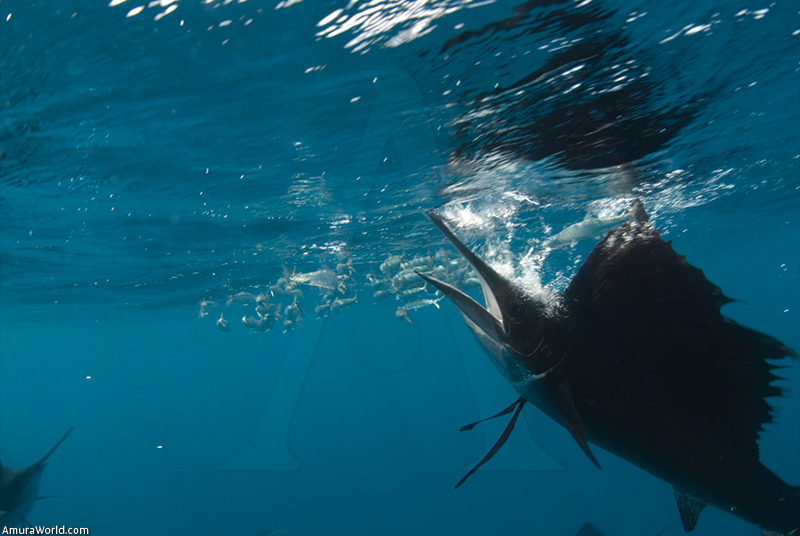 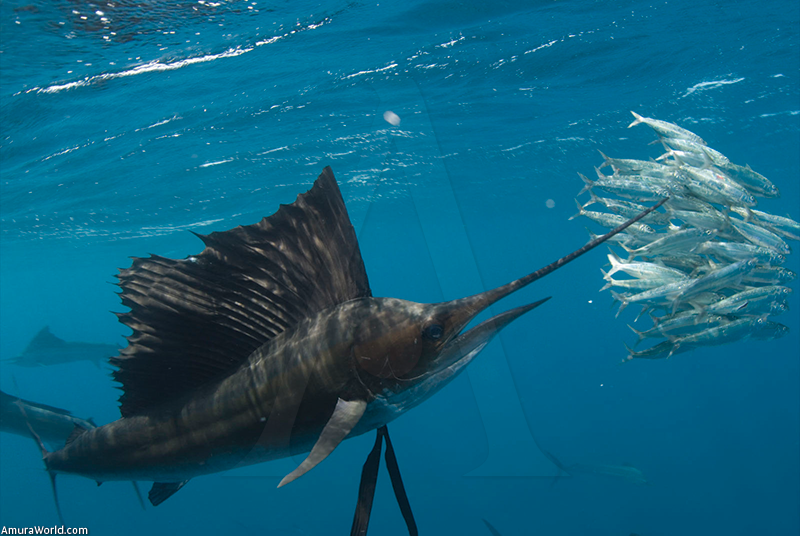