Robert Greubel and Stephen Forsey began working on their own visión, new generation Tourbillon in 1999.  Over four years later, they unveiled their brand ‘Greubel Forsey’ and stunned horological aficionados with their innovative “Double Tourbillon 30°”. A timepiece clearly demonstrating the two watchmakers’ quest for innovation and perfection. Amura now presents their “2nd fundamental invention the Quadruple Tourbillon à différentiel sphérique where Robert and Stephen have engineered the four Tourbillons together in a contemporary design, in which elegance and harmony are the dominant features. Thanks to this uncompromising creation, they have reaffirmed themselves as authentic inventors, using the mechanical timepiece.

In the same spirit, and owing to the impressive number of parts which make up the movement, an asymmetrically-shaped case was chosen. The asymmetrical form was also an aesthetic tribute to the asynchronicity of the four Tourbillons. To complement the homogeneous ensemble, the displays of the small second and the power reserve dials are semi-circular.

Wearing a Quadruple Tourbillon à Différentiel is to enter the universe of Robert Greubel and Stephen Forsey, and to share, appreciate and be empathetic to the essential values emanating from their Invention. 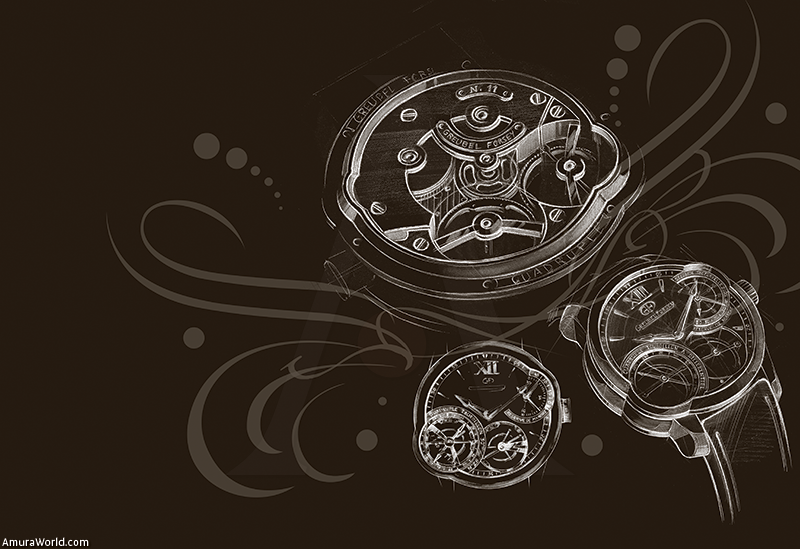 Greubel Forsey’s second fundamental Invention is the culmination of five years of research and development.

The two oscillators, independently regulated inside the four Tourbillons, are coupled by a spherical differential which transmits their combined precision to the time display.

Two barrels connected in series supply power through the spherical differential to the Tourbillons.

At the heart of the Quadruple Tourbillon à Différentiel, each of the four Tourbillons makes their own distinct contribution towards achieving an exceptional level of accuracy.

This is due to the asynchronicity of the Tourbillons’ locations relative to each other. This ensures that it is practically impossible for the balance wheels to be in an unfavorable position, no matter which angle the watch is in. 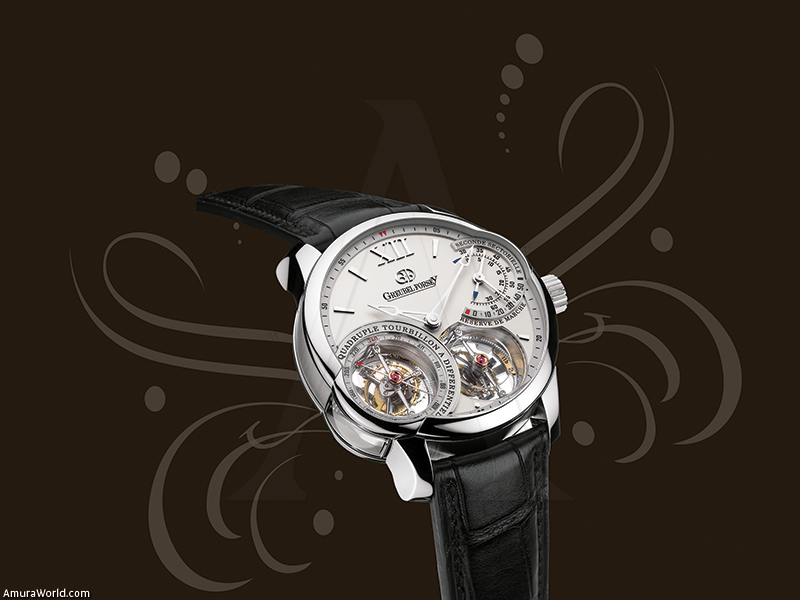 Ample energy is assured by two large, fast-rotating barrels which guarantee a power reserve of 50 hours of .The energy stored in the two barrels is transmitted equally to the two regulating organs via the spherical differential.

The technological sophistication of this movement is such that it was necessary to invent new testing instruments, and only these were able to provide the necessary information for checking and verifying the performance of the Quadruple Tourbillon.

Conceived to function in three dimensions, with this invention Robert Greubel and Stephen Forsey have created yet another landmark Tourbillon wristwatch.