Mexico’s Ambassador to the World

Tequila is the Mexican drink par excellence and is, of course, Mexico’s most famous ambassador. To demonstrate the influence of our country and its beverage, we only have to remember that, at the close of 1994, Mexico suffered another of its financial crisis, which not only affected our nation but many others, as well. That influence was reflected in the fact that the “tequila effect” concept was coined in the global economy.

Starting in the 1990s, tequila went from being a drink consumed by the lower and lower-middle classes and became the drink of the elite, found in the best bars and restaurants, as much in Mexico as abroad. This is not something that happened by chance, but is due to the care taken in the manufacturing process and the quality of the final product.

Today many tequila companies try to obtain certification from the International Organization for Standardization (ISO 9000) as an assurance of their quality. They are thus able to develop new products and have a competitive edge.

The leaves of the agave are cut away and the plant is taken out of the soil in order to remove the “piña” or heart (this takes place, ideally, when it is between 7 and 10 years old). The heart is then taken to the factory, where it is divided in two or four parts. 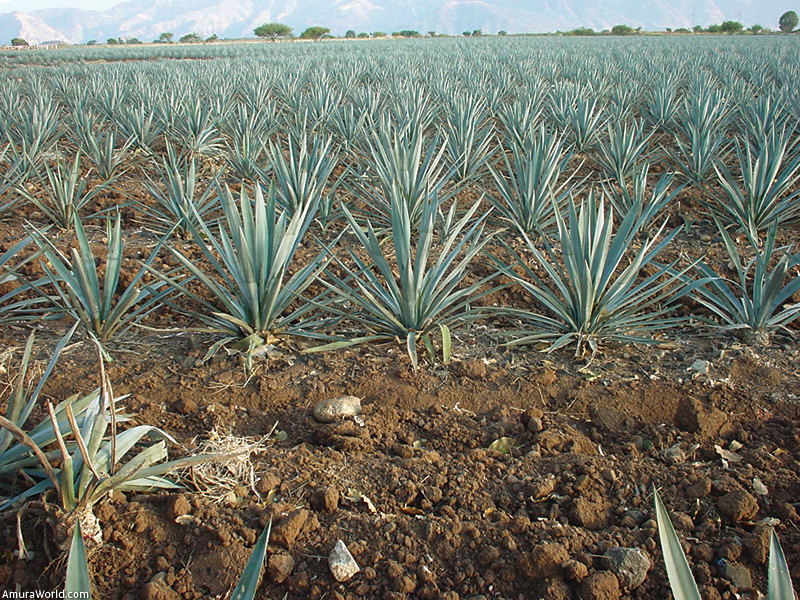 • Cooking the heart or “piña” of the agave plant

To obtain the “honey” of the agave, the polysaccharides (starches) in the heads or “piñas” of the plant have to be converted into fermentable sugars, so that they, in turn, can be metabolized by the yeasts, the agents responsible for the fermentation. In order to do this, the raw material is placed in ovens, either in modern autoclaves or in traditional masonry ovens, which are heated with steam (from 18 to 48 hours, respectively). The steam cooks the “piña” and the result is a product with a high sugar content.

• Extraction of the syrup and pulp residues

To extract the syrup from the cooked agave, it is placed in a mill or shredder and pressed until the juice is released. At the same time highly pressurized water is sprayed over the pulp to extract the greatest quantity of sugar possible. The product obtained from this part of the process is a diluted agave juice. Between 55 and 60 kilograms (121 to 132 pounds) of pulp are discarded in the production of one liter (1.05 quarts) of tequila. The syrups extracted from the cooked agave are collected in deposits and transported by pipes to the preparation or fermentation vats, whichever the case may be. 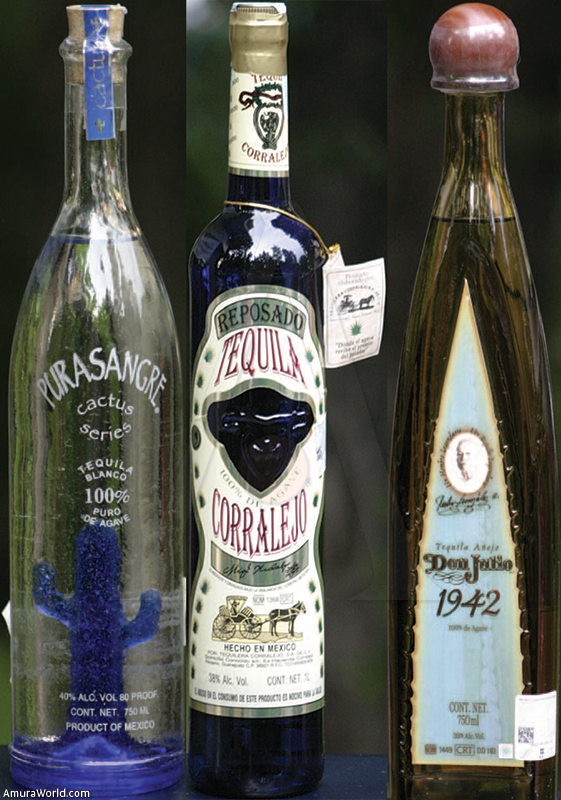 This is the term for the process of transforming the sugars into ethyl alcohol, and other products in lesser proportions. The fermentation deposits are huge stainless steel vats that are filled with the syrups, also called must. Yeasts and fermentation nutrients are added. The length of time for fermentation varies in accordance with the temperature of the surroundings, which changes with the seasons. The fermentation process takes over 30 hours.

The products of any fermentation process are alcohol, carbon bioxide, water and the energy that is released in the form of heat. While it is fermenting, the must is effervescent and the bubbling ceases when the yeasts finish doing their work. This is the end of the process and it is customary to say “the must is dead” when the yeasts have finished converting the sugars to alcohol.

This is the process through which alcohol, water and solid materials are separated using heat and pressure, and a product with a higher alcohol content is obtained: tequila and “nasty” wine. The latter are discarded. The nasty wine is also called “fermentation mud” and is made up of water and yeasts. The distillation process takes place in double distillation stills, made of copper and stainless steel. These stills basically consist of three parts: the pot or cauldron (where the must is placed), the column or capital (that collects and conducts the steam), and the coil (in which the steam is cooled and turns into a liquid).

The boiling points of the different ingredients and the different volumes and pressures of the still help the gases to separate, and they condense into products with a higher alcoholic content. 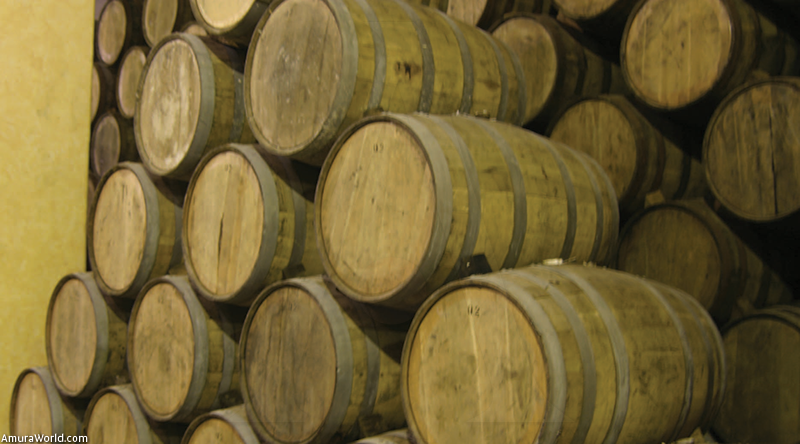 The Official Mexican Norm states that tequila is a regional alcoholic beverage obtained through the distillation and correction of must, prepared directly and originally from material extracted within the installations of the factory. This product is the result of grinding the mature heads of the agave plant, Tequilana Weber Blue, previously or subsequently hydrolyzed or cooked, and fermented with yeasts, either cultivated or not. It can be enriched with other sugars in proportions no greater than 49%, in the understanding that the products must not be cold when they are mixed together.

This beverage is only produced in regions protected by a denomination of origin, encompassing the entire state of Jalisco (where the municipality of Tequila is the most famous) and some regions in the states of Guanajuato, Michoacán, Nayarit and Tamaulipas.

Tequila is the only beverage in the world, with a denomination of origin, which requires a raw material that takes over seven years to mature. 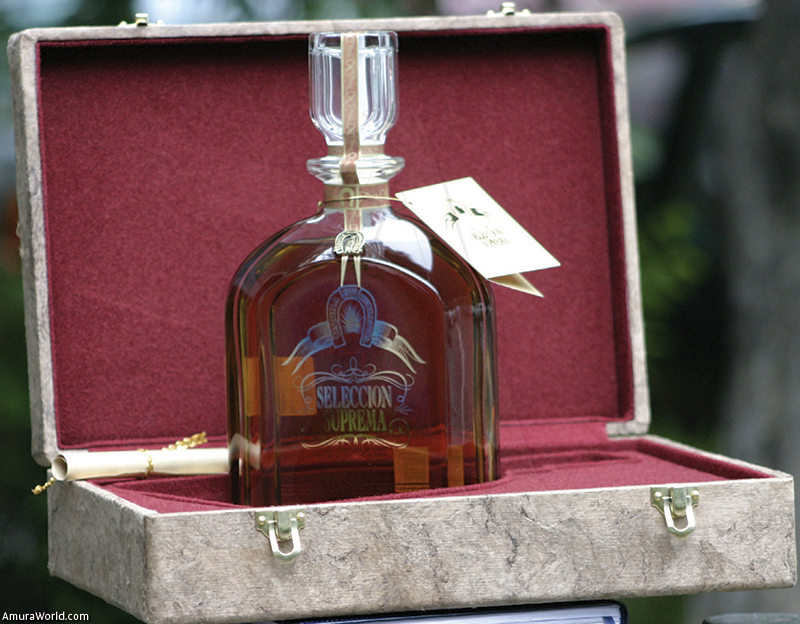 Tequilas are first classified by the origins of their sugars. That is to say, the 100% blue agave tequilas (that, in accordance with the Official Mexican Guidelines, must be bottled in a plant that is controlled directly by the manufacturer, and that must be located within the region of the denomination of origin) and the tequilas that have 51% sugars that are the product of agave and 49% from other sources, like sugar cane. Often they are used for cocktails. These tequilas are easily identified because their labels only say “Tequila” and not “100% agave tequila”

The other division includes the “mature” or “decanted” tequilas and the “whites.” The latter is neither aged nor rested and has no added sweetening. The requisites for the four types of tequila established by the guidelines are the following:

A product whose commercial alcoholic content must be diluted with water to reach its commercial proof.

A product that can be decanted, whose commercial alcoholic content can be diluted with water. The result of the mixtures of white, or silver, tequila with rested, or aged, tequilas is categorized as “young” or gold tequila.

This product can be decanted and is left at least two months in oak or helm oak containers. Its commercial alcoholic content, when necessary, has to be diluted with water.

A product that can be decanted, is subject to an aging process of at least a year in oak or helm oak containers, with a maximum capacity of 600 liters (158.5 gallons), and with a commercial alcoholic content that, if need be, must be diluted with water.

Today, tequila has become one of the distilled alcoholic beverages most appreciated by Mexicans and foreigners. Its popularity has no limits, like the mariachis who have brought us fame throughout the continent with their music. Could anyone imagine a mariachi dressed in a charro costume drinking anything but tequila? 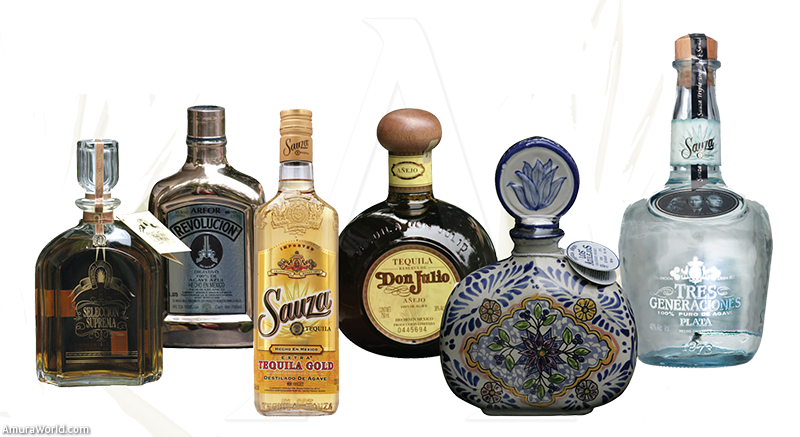