Even if there have passed several months, since the traditional grape harvesting, in some vineyards in Germany and Canada sheer vines hang, row after row, loaded with ripe Riesling and Vidal blanc grapes; there hang also some from Gewürztraminer, Chardonnay or Cabernet franc, though. They will remain this way until December and, sometimes, until January or February, when the winter frost makes the grapes reach the point of congealment, thus having their sugars and fruit acid concentrate.

The birth of a fortuitous delicacy

The Eiswein tradition starts from what might be regarded as a tragedy. According to the lore, it was discovered by accident when, in 1794, some vineyards from Bavaria, Germany, were affected by an unexpected froze. The vintners thought it would be their ruin. However, encouraged by the legend of the old Benedictine monks of the neighboring Johannisberg monastery, who 20 years before had, on purpose, gathered a late crop from which a sweet liquor arose –today known as Spätlese–; the viticulturists decided to harvest those frozen grapes and process them, the same way as the monks did; thus they were pressed, and yielded an elixir, stemming from which, against every forecast, a dainty wine was their upshot. Ever since that time, the ice wine has been a coveted produce from the coldest German, Austrian and Canadian wine making regions. 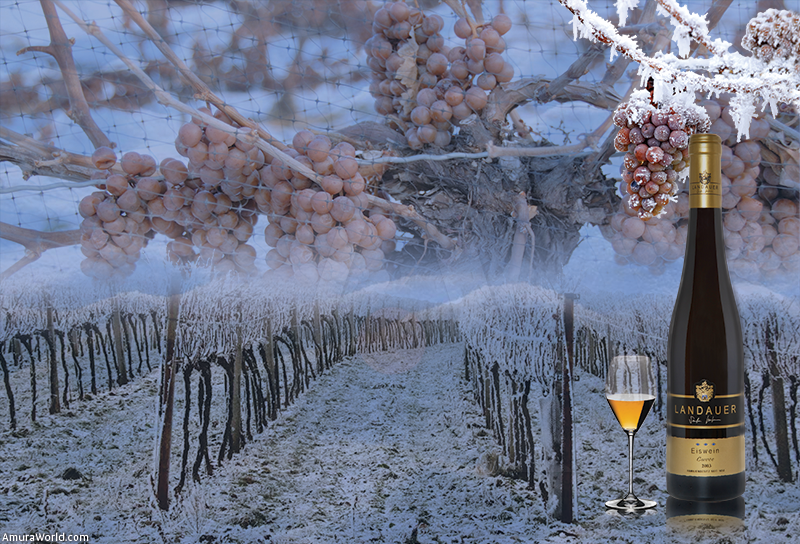 In Germany, the ice wine crops are gathered in the dark, in the cold winter early mornings, when the temperature lowers around minus 12 ºC; for it is believed that doing it this way grants them special boons. This is a wine that flares a gust of flavors in the mouth, in an astonishing concentration of sweetness and acute sourness; these wines grow finely old and reap yields from some aging repose in the bottle, specifically the ones from the Riesling vinification variety. These wines are also pleasurable in their youth, so their tasting depends greatly on personal choices.O