Jeff Wall: reality and its caesura

Through the end of September, the Art Institute of Chicago is presenting the Jeff Wall exhibition before it is moved to the San Francisco Museum of Modern Art through January el 2008. The exhibition brings together 41 works representative of the work produced by the artist for almost three decades.

Jeff Wall (Vancouver. 1946) uses light boxes, from advertising signs, to mount his photographic work. His pieces consist of monumental backlit transparencies that have disturbed the sediment of traditional photographic conventions, while taking advantage of the moment to change it from analogue to digital.

Suddenly the distance between both seems significant: the chemical register of the light influencing a chemically treated paper in analogue photography that creates an immediate imprint of the image of an icon. On the contrary, the digital image is information captured, scanned and manipulated by computer. Wall exploits the influence of both practices of the image, but not without generating uncertainties about the physical statute of the reality of things or the ontological nature of the image.

With Wall's work, with no concessions, we enter the world of simulation. We can assimilate his images as events in and from reality itself, but do not cease to be. in the maj ority of cases, the result of a laborious construction; in other words, of a montage. The reality that presents us with the images is. highly unlikely but. many times, frankly possible. Between reality and candor, the unreal and the possible. the real and the imaginary. Wall's work inevitably lead us to question about the ontological statute which we are living and the bias, questioning the world in which we live.

His images have a final and even and ominous clarity. Many of them are similar to documentary photography, although they document scenes that never existed. Rather than respecting the fact of reality, they hide behind a scrupulous construction that took years to create. They are a sophisticated ventriloquy that hides a mechanism that animates it within. The simulation, in Wall's work majestically hides all the fissures that make the entire image appear like a clear icon of reality. If seams were noticed, the image would appear before us like a Frankenstein made of different parts. Reality is gathered, pleated, coincidental, each take is digitalized and mounted, with mastery and invisible joins in order to achieve an image with a totality in itself. 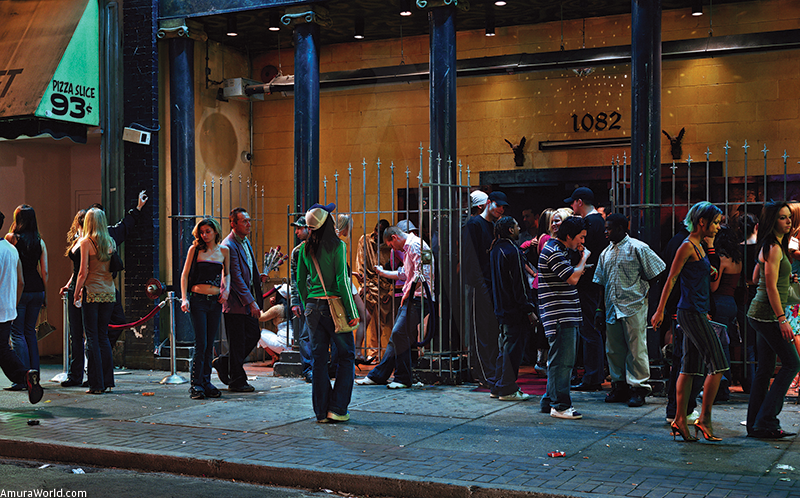 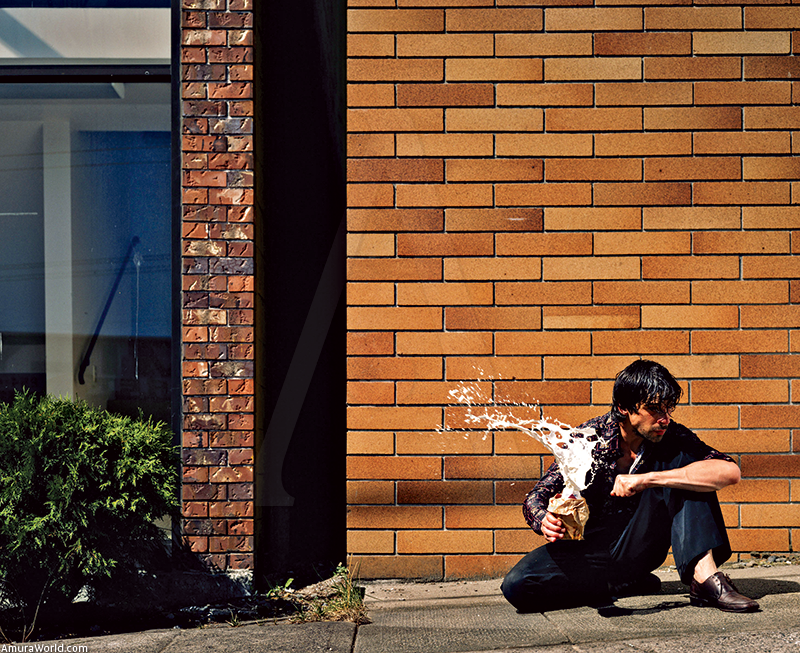 Much has been written about the intrinsic quality of photography to perform a fragmentation of the world. Insofar that an image is temporarily frozen in the instant and spatially extracted from the totality of the scene that frames it. photography operates as a fragment of a reality that we assume to be whole. In some manner. Wall has brought to photography a type of unity because it works in reverse. The scene as a totality seen before us in the final work, never actually existed in reality since it was configured and constructed from numerous takes. Such is the case of the piece The Flooded Grave. 1998-2000.

Wall worked for two years with a team of marine biologists and a botanist to create a sophisticated ecosystem of starfish, anemones, urchins and vegetable life, which he superim posed on another image (consisting of multiple takes) of a cemetery in which you doubt the hole that coincided with the exact measurements of the artificially created image of the marine ecosystem. The result is a hallucinatory and constructed image, somewhat false and unreal, but possible; a fantastic vision that combines the germinal world of marine life with a mortuary landscape.

A Sudden Gust of Wind (after Hokusai). 1993. belongs to the same group of images consisting of digital photo montage and construction. In this particular photograph, but above all in all of Wall's work in general, cinematographic language is a resource that adds a lot to the work. Through the set. the location, lighting, the camera angles, the hiring of actors, but above all the use of narration. Wall's photographic takes use cinematographic logic. This image, rather than being a decisive moment captured by the photography, is more like a still from a movie.

Wall turns both to the cinema and to the history of painting and drawing, to literature and mundane events from daily life. Digital montage and the construction of sets developed both in the studio and outside. His work majestically shows a kind of collective fiber that investigates the ethical postures of our societies. 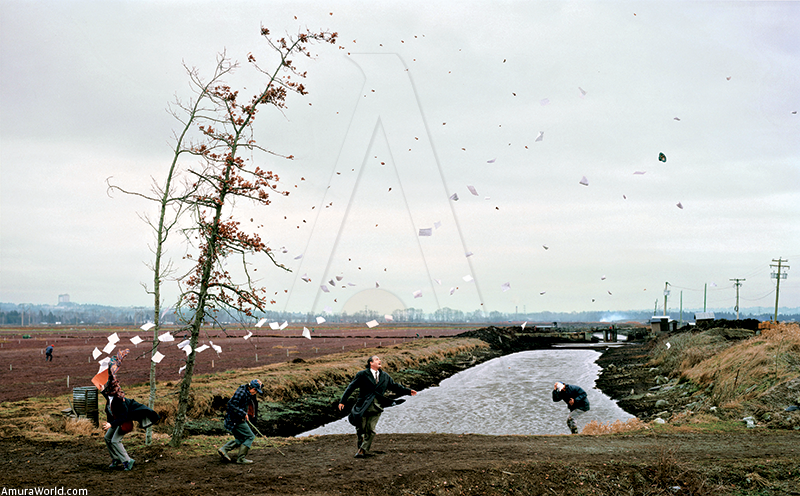 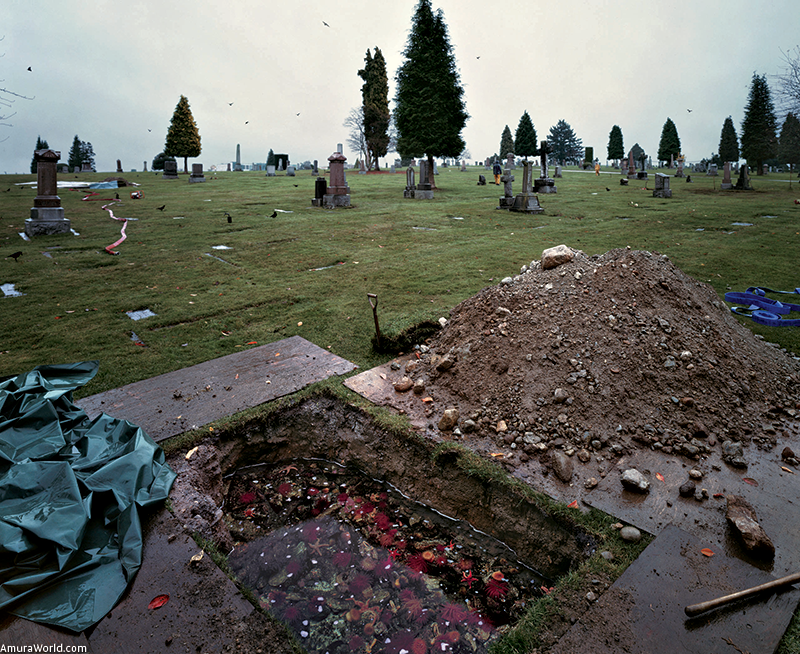 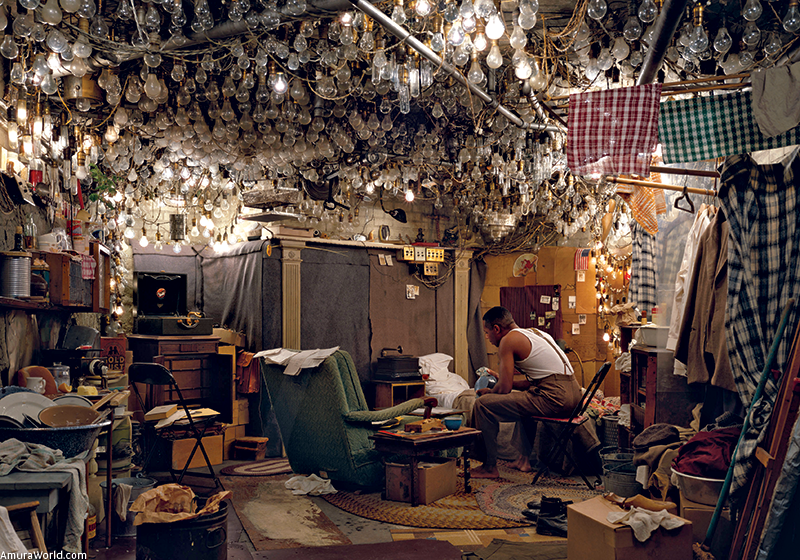