The true Pirates of the Caribbean 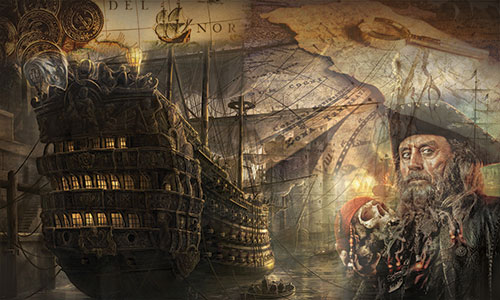 As a child, just like many other kids of my generation, I wanted to be a fireman, a cop, an astronaut and…a pirate.

I was just learning to swim and I already wanted to sail the Seven Seas on board a great vessel or a barque or a galleon, it did not matter, but I was always willing to leave in search of treasures, adventures and glory; not knowing that, in fact, I was making a kind of an apology for one of the worst pests that have ever scourged Humankind; nor was it about being vicious, profligate and a drunkard, for in piracy there were all kinds: from the scum of the Earth to the true Gentlemen of the Sea. The word “pirate” for some people evokes the image of a bearded man with a pegleg, wearing an eyepatch and carrying a parrot on his shoulder; while, for others, the first thing that comes to our mind is the antihero’s emblematic movie figures such as Captain Blood (the insiders will understand the reference) or the peculiar Jack Sparrow (“Captain Jack Sparrow” as the character himself would clarify it); being these nothing but a cliché, a figment of fantasy more than an actuality; any story of its kind being naturally full of myths, half-truths and barefaced lies. 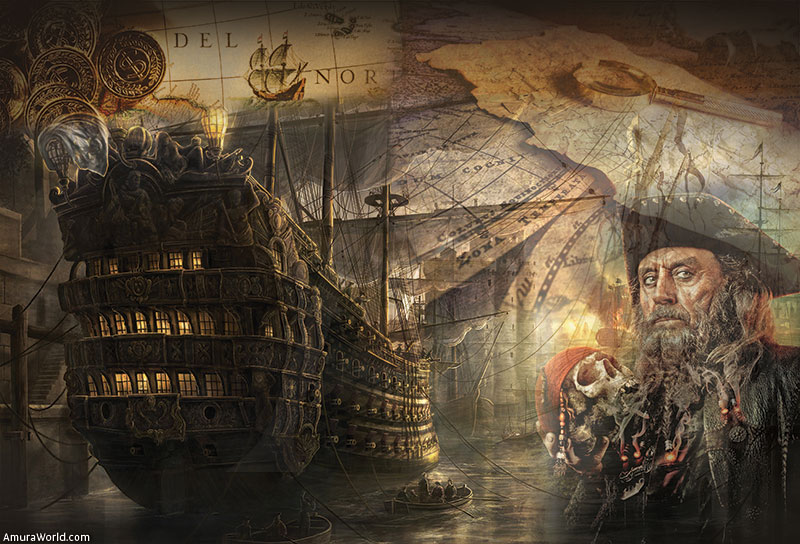 One of the latter is that piracy is used to being linked with the time when Europeans ruled the American Continent; though it has been an activity as old as navigation itself. Ever since the human being started to venture into the sea in search of food or new lands, groups willing to live off plunder arose. In earlier times Chinese, Cilician and Greek pirates got a reputation; in the Middle Ages and for most of the XVI century, the Barbary pirates ravaged the Mediterranean, cornering empires as powerful as Charles V’s; moreover, virtually, all of the seas of Europe, Asia and Africa were infested with them.

No wonder that at the same time the Spanish conquered America and the voyages of the so called Spanish treasure fleet started, these freebooters found a paradise –literally speaking—in the Caribbean; some of them even had patronage from the European monarchs who were jealous of the Spanish might.

So, from the XVI century to the XVIII, piracy campaigned by roaming freely all over the Caribbean Sea, especially since the British conquered the Spanish. In the XVII century, the Saint-Christophe (renamed as Saint Kitts by the British), Jamaica and Tortuga islands, the latter in front of the coastline of what is presently Haiti, were used by the pirates, for many years, as beachheads to raid both the Spanish cities of America and the merchantmen without regard to their nationality.

The case of Tortuga Island is quite curious because pirates founded the so called Brethren of the Coast  on it, a kind of a syndicate among pirates of different nationalities with the aim of avoiding conflict and protecting widows and the wounded in combat. This brotherhood had its own laws gleaned in a Code of Honor that, among other things, decreed the equality among all associate pirates, the common property of the island and the ban of slavery. Decisions were taken democratically through universal suffrage; moreover, all were bound to settle the way in which the loot would be meted before setting sail.

Contrary to popular belief, pirates would not raid fleets laden with American gold that had Spain as destination because they were heavily guarded. They only had the courage to do it if, after a storm, some ships straggled. Instead, they would rather have raided only merchantmen coming from Europe, freighted with goods, which normally sailed alone; the same as the unprotected coastal cities from the Spanish America, such as Panama, Campeche, Cartagena or Maracaibo; but, moreover, every time it was feasible, they avoided direct confrontation, preferring to frighten their prey so as it would surrender without presenting any combat, which happened successfully most of the time. 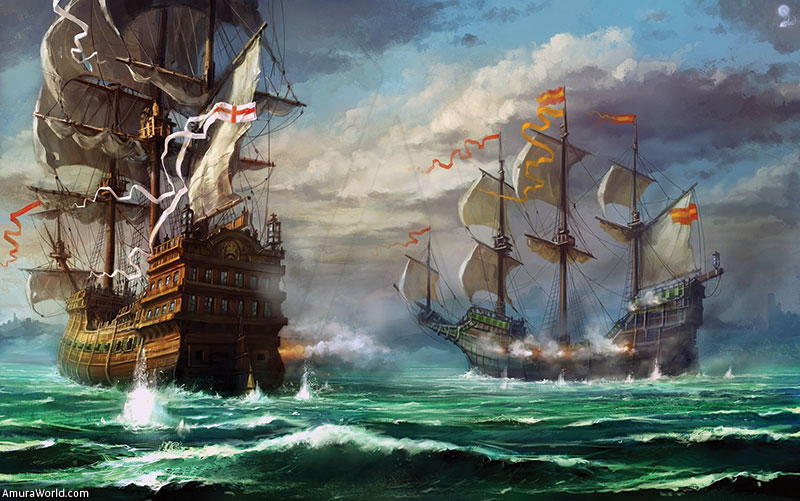 A matter of semantics

The root of the Latin word pirate is Greek peirates (πειρατης) that, in a nutshell, refers to the person trying to make a fortune through adventure; even though there exist several terms to name people engaged in this trade: pirates, corsairs, buccaneers and freebooters, each one with different nuances.

Corsairs were seafarers possessing a Letter of Marque and Reprisal, a document granted by a government to undertake a naval campaign –raid—against pirates and enemy vessels; that is, doing a cursus (a race, in Latin language), a persecution and looting of ships. The corsairs proliferated specially in the XVI century, even though some of them remained until the XIX century.

As for buccaneers, most of them native from France, they inhabited what at present is Haiti and were characterized by being bold hunters who smoked the meat of the game they had captured to sell it to the passing ships by the coastline; they wore sloppy apparel with gory stains spattered by the quarry they would chop up. When the Spaniards ousted them, at the end of the XVII century, they took refuge in the Tortuga Island. There they pursued smuggling and slave trade while they marauded small boats, boasting their strength and causing big scandals. The word “bouccaneer” is derived from boucan, a type of smoked meat; however, boucan also means uproar, hubbub.

The freebooters, mostly Dutch, harassed the Caribbean Sea during the XVII century; justified their overt acts declaring that they fought for freeing the former overseas Spanish provinces.All in all, everyone was the same, under a different name, though. 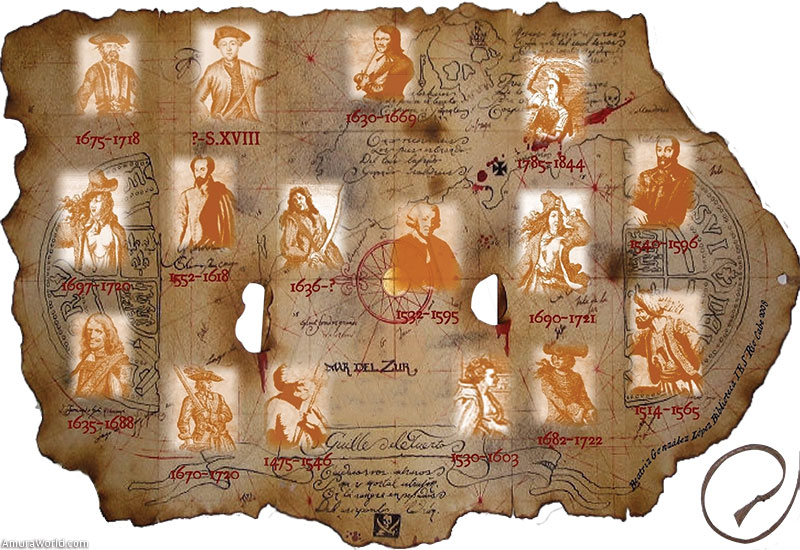 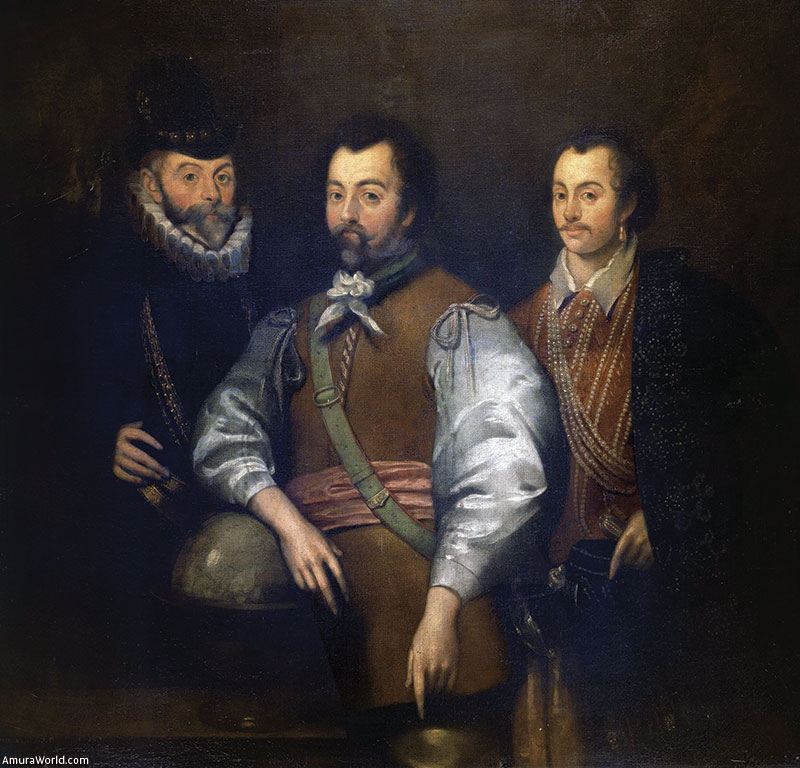 One of the most vicious pirates was, certainly, François l’Olonnais, a French who became an authentic psychopath, who murdered for pleasure, and raped and quartered his victims; it is even said that, once, he ripped the heart off a man to eat it in front of all of his crew. After several years of piracy, his life ended up in a way very suitable with his existence. His boat stranded at the coast of Darién, and when he entered the jungle along with his men, they were captured by the Kuna aborigines. This tribe of cannibals killed, dismembered and cooked the group of pirates but one, who managed to escape, and told what had happened.

On the contrary, Bartholomew Roberts, better known as Black Bart, was a chivalrous pirate, extremely successful in his incursions and, a rare case in that era, entirely teetotal. In just a couple of years he seized more than 200 boats (out of the 456 it is said he besieged), including several battleships. He used to treat the defeated very well but the French, who he always irrationally loathed; he even hanged the French governor of the Martinique Island, in his own ship. He was the Scourge of the Caribbean Sea, Brazil and the Coastal East Africa until his sailboat was detained by the British who found more than 300 hundred tons of gold dust in the ship’s hold.

The case of Jack Rackham, better known as Calico Jack, is also worth mentioning. He got his nickname by wearing calico, a cotton fabric, printed on one of its sides, regarded as a very fancy apparel. This pirate had the only two women ever reported in the trade as part of his crew, Anne Bonny and Marie Read. Bonny was Calico’s lover and together they traversed around the Caribbean Sea, sowing fear and forging their own legend. Anne and Marie were as brave as any of their mates, if not more. Eventually, the ship fell into the hands of the British in 1720 (who, by the way, found the crew entirely drunk.). Sentenced to death, both had their executions commuted to incarceration as both were pregnant. Marie died in prison and Anne, after her release, got married and died in Virginia, USA, surrounded by her children and grandchildren.

Other famous pirates were Henry Morgan (who managed to become a governor of Jamaica); William “Captain Kidd”; Edward Teach “Blackbeard” (former member of the Royal Navy) who liked to appear in combat, in the middle of a cloud of gunpowder smoke, in order to add it drama; the Turkish pirate Redbeard  (Barbarossa Hayreddin Pasha); Sir Francis Drake and Sir Walter Raleigh. 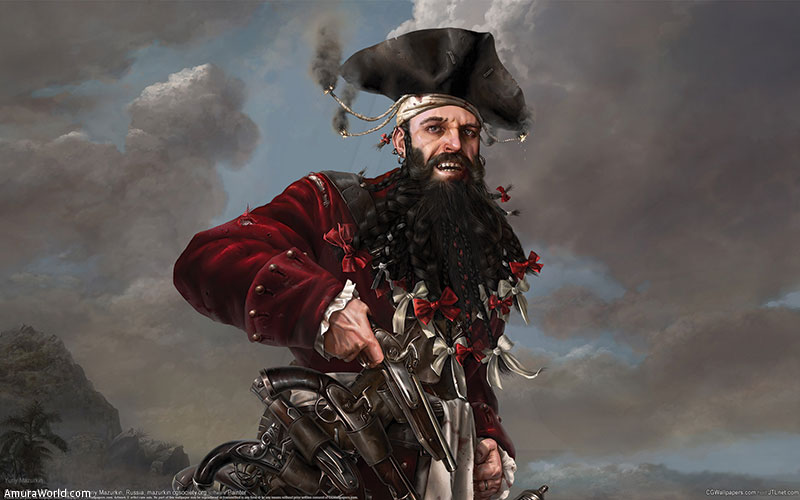 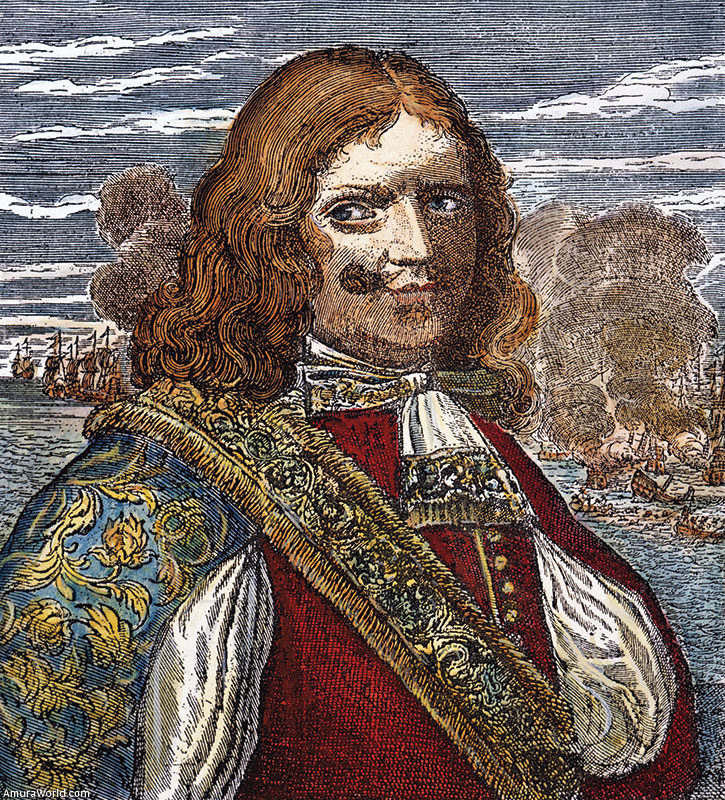 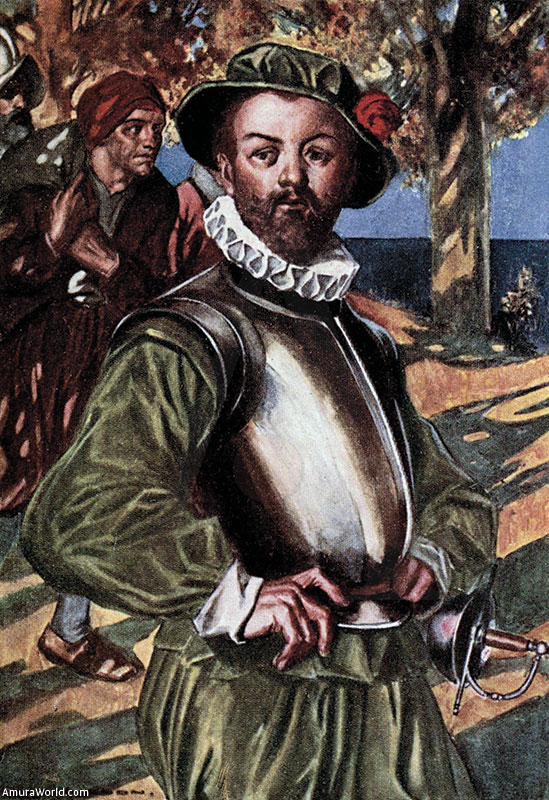 The classic Jolly Roger or pirate flag, with a white skull and a pair of bones (tibias) below, over a black background, was the emblem of pirates; and in the social imaginary it was popularized as a badge to recognize pirates; every character had his own.

The first flags that provoked terror were bright red: jolie rouge. They were raised when the sailboats intended to attack their foe in order to loot, no prisoners taken; that is, they communicated their intention to wage bloody battle, aiming to achieve either victory or death.

The flags of Richard Worley, Edward England, Blackbeard, Edmund Condent, Henry Every, Christopher Moody, John Rackman, Bartholomew Roberts, just to mention a few, are regarded among the most famous.

In regards with the pirate ships, they are also matter of controversy. Movies usually show us big, heavily armed and powerful ships; that was not the reality, though. Boats were usually small and quick, because that allowed the pirates to reach the heavy galleon freighters, which used to be their favorite preys, the same as to escape from the warships chasing them. An example are the sloops, having between 19m and 24m of length and a shallow waterline; thus, crew members were not numerous, but enough to frighten the crews.When a ship fell into their hands, most of the pirate captains offered the seamen to join his crew. If they refused, they could have been murdered or marooned in a remote island. Many a pirate initiated his career this way, as a crewmember of a seized merchantman.

At the end of the XVIII century piracy started to decline, when the hub of world trade moved from the Caribbean to India, and the governments became more committed to eradicating it. 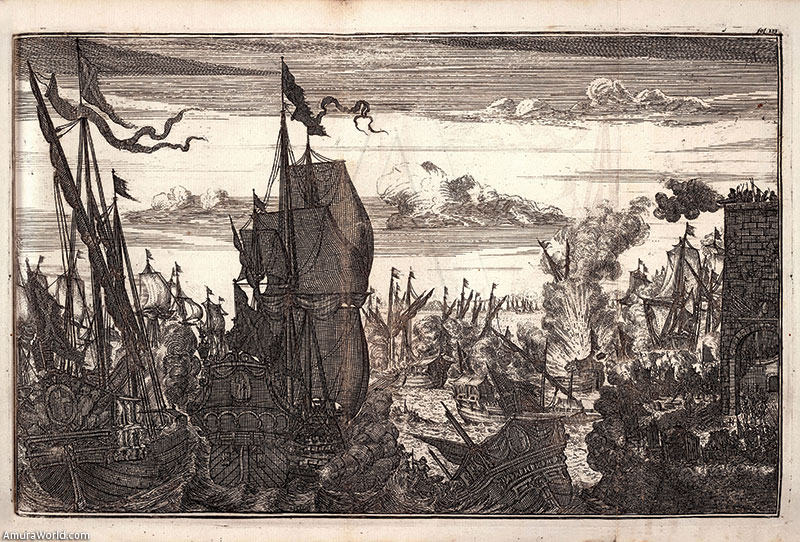 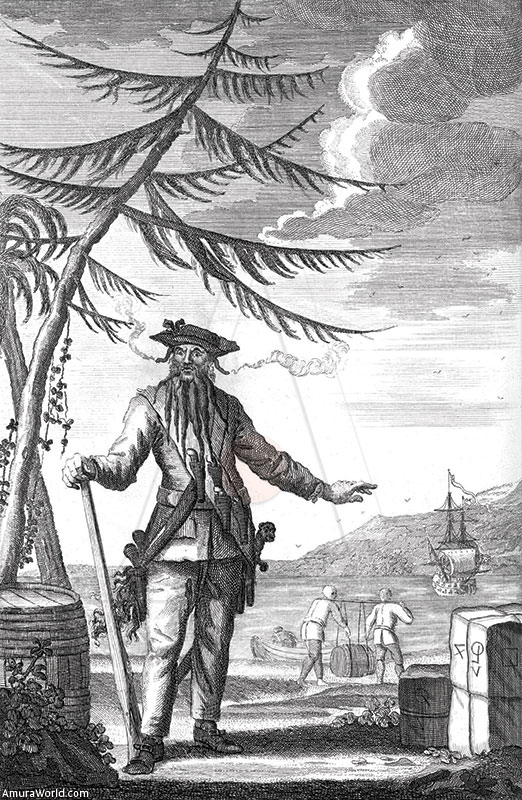