13 Traditional Arts and Crafts of Bhutan 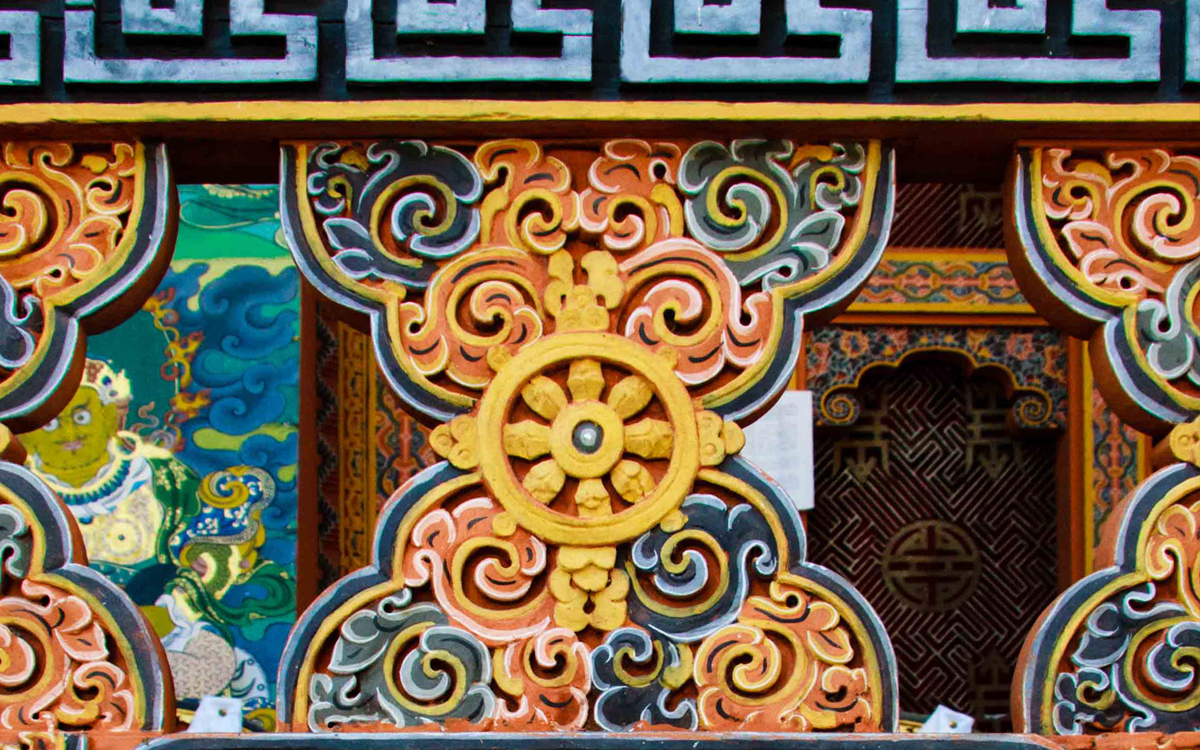 An Inheritance of Spiritual Creativity

“Were I to epitomize Bhutanese art with one word, that word would be color. (…) The attention to detail, the symmetry of figures, the nature of the theme and above all the bold color treatment are perfectly combined.
G. N. Mehra

In Bhutan, art remains an essential part of daily life that retains the purity and handcraft of ancient times that rarely manifests itself in Western Culture. Certainly, these practices evolve and adapt through the new generations, but at the same time it preserves the internal and external spirituality—full of the sacred beliefs of this mystic and mysterious land—of creating a work of art from the past. For the Bhutanese people, each piece they create represents a religious experience, a connection with something that goes beyond them and enlightens them creatively, and this is why the 13 Traditional Arts and Crafts, known as Zorig Chusum, have prevailed to this day and continue to be one of the most consequential aspects of Bhutanese culture. 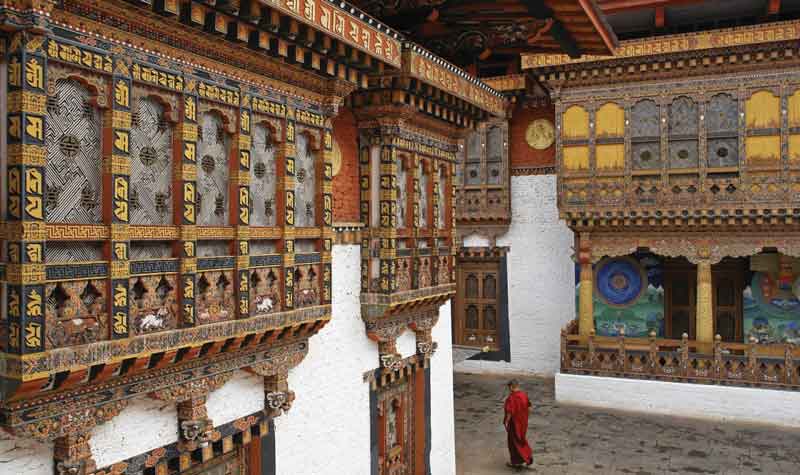 The National Institute of Zorig Chusum, established in 1971, is located north of the city of Thimphu, and this is where the young learn every aspect of the portrayal of spiritual values in each of the crafts that embody the ordinary transformed into something sublime. The institute is open to the public; it is possible to wander through the charming corridors, enter the classrooms to observe and talk to the students, interact with them while they work—learn from them, definitely. It offers visitors the opportunity to be part of this cultural tradition where art and religion are so intrinsically linked.

The 13 Arts are rooted in Buddhism. They are believed to have been introduced by Pema Lingpa in the 15th century and categorized in the 17th century by Tenzin Rabgye, the 4th Druk Desi—the title given to rulers; it means “thunder dragon” in reference to Bhutan. Each work of art contains the same principles, symbolisms and ideologies that make this practice so ancestral, but the artist inevitably leaves a print of their own style, which contributes to the uniqueness of the piece.

However, one important aspect of Bhutanese art is that it is always anonymous. If a work of art bears a name, it is usually the name of the person who commissioned it, not the artist’s, because the importance of the craft lies in the craft itself, not in those who produce it. Art speaks for itself, the same as each representation of belief and value. Thus, these objects decorate every home, temple, and street. The ornaments are used every day as simple, yet beautiful tools. Colors permeate every aspect of the paintings, woodwork, sculptures, and embroideries that depict deities, sacred animals and other relevant imagery. These are some of the most important arts and crafts in Bhutan: 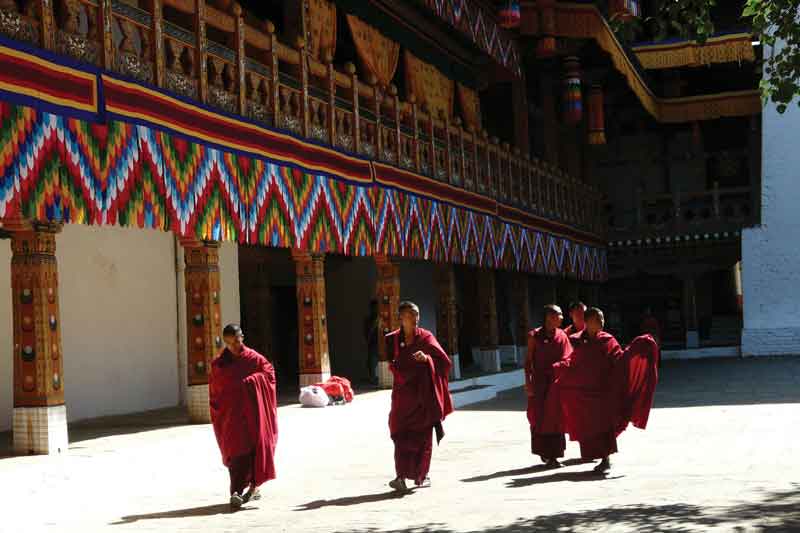 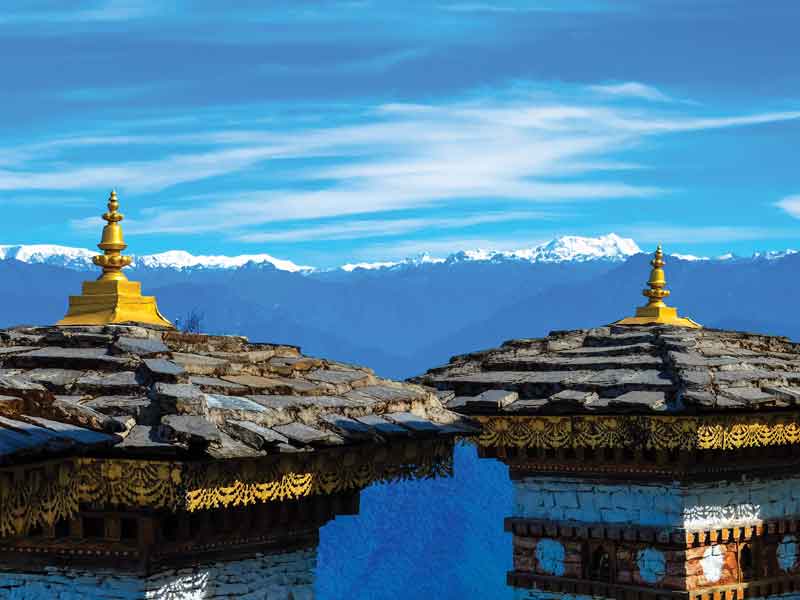 Bhutanese paintings are the portrayal of human beings and their interaction with nature and their beliefs. The colors of this craft can be appreciated in flags, tools, murals, frescoes, canvases, fabric, paper, wood, stone and much more.

Paintings often are the visual reflection of the inner self; thus, they depict spirituality, the significance of Buddhism, happiness and all things that are sacred to them and that proudly represent Bhutanese identity. Old paintings are considered sacred and are preserved for their cultural value. 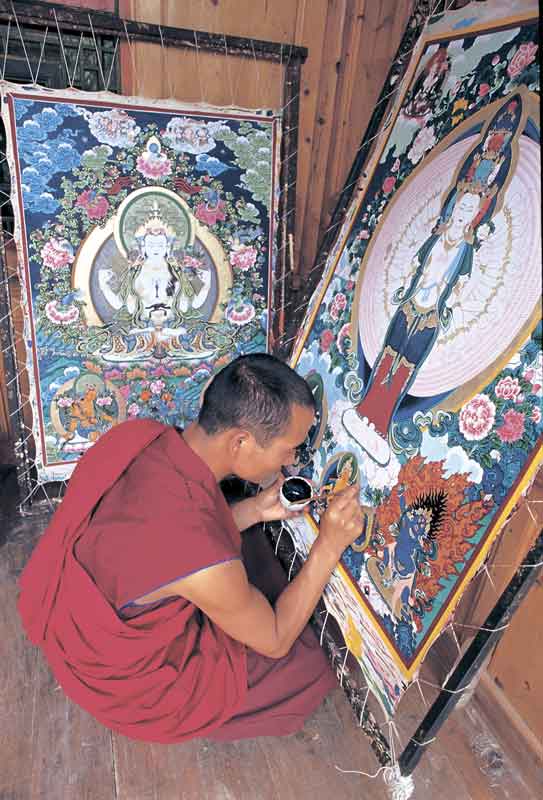 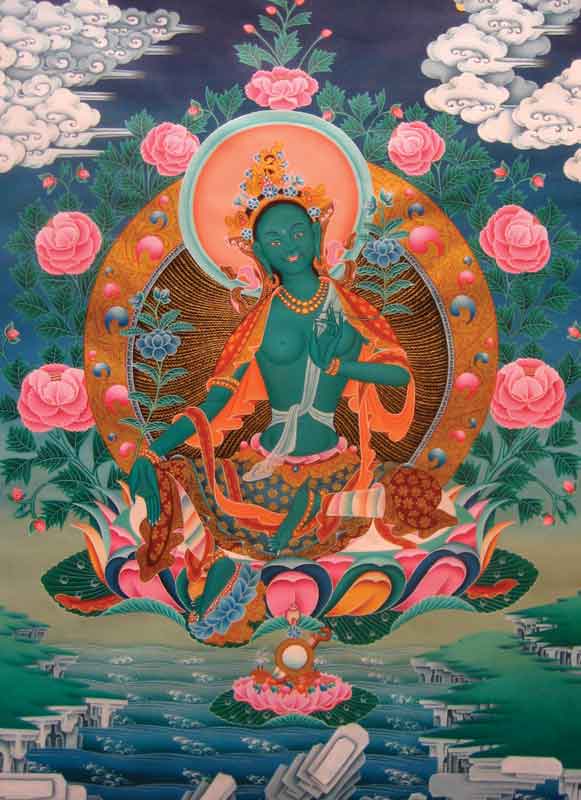 Sculpture on clay is more ancient than sculpture on metals like bronze. These sculptures are characterized for their beauty and delicacy, hollow on the inside but full of meaning on the outside, portraying enthralling beings or landscapes. Sculpting in clay is a male craft, but pottery is reserved for women, and they both carry great significance. Pottery is still an active craft that evolved, but still follows the ancient process of shaping and baking the clay. Sculptures are typically found in temples, monasteries and Dzongs, while pottery is still wildly used in everyday life. 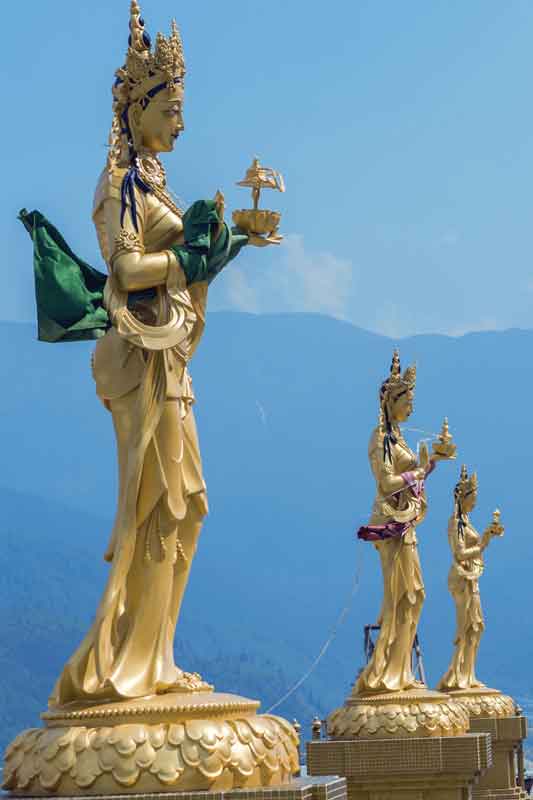 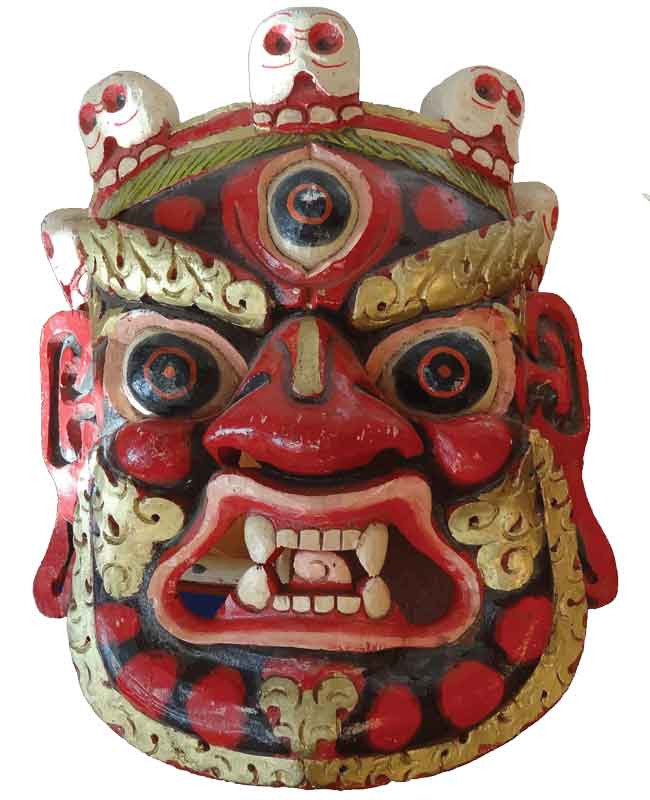 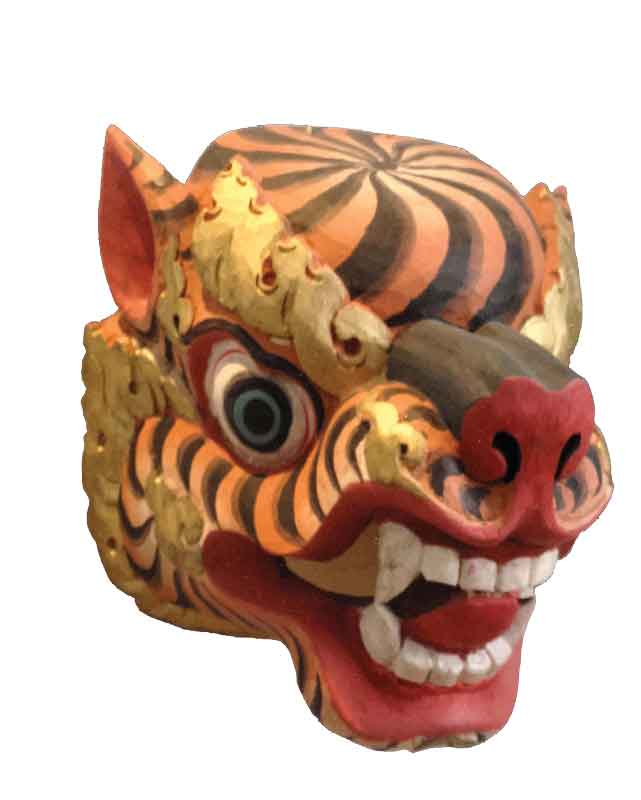 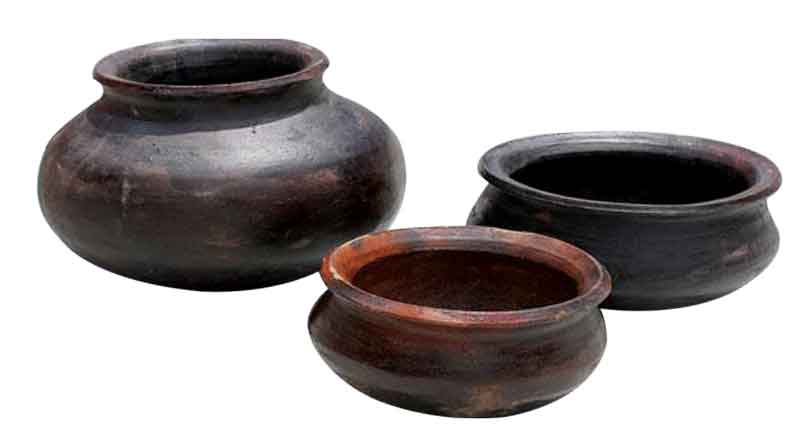 The origins of papermaking are deeply rooted in Bhutan and many sacred scripts have been written on this paper. It is beautifully elegant and practical, elaborated with extensive care to be extremely resistant, since it is termite and insect repellent. This craft used to be specifically monastic; nowadays,  all kinds of paper are available in the market, but people continue to use Dezho paper, made out of the Daphne and Edgeworthia plants, for special occasions. 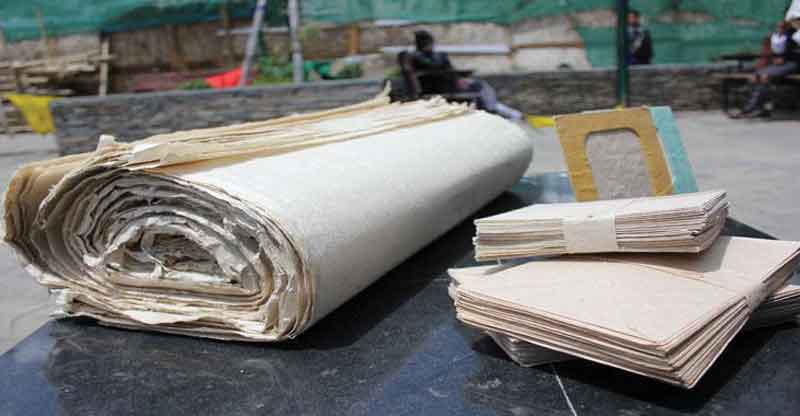 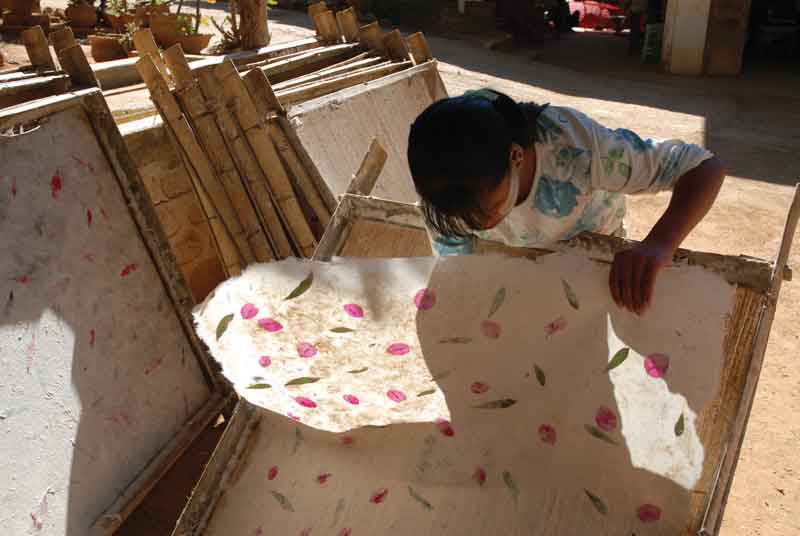 The art of casting was first introduced in Bhutan in the 17th century by Nepalese artisans. It ranges from the creation of kitchen utensils, pinnacles and statues, to musical instruments, pottery, tools and ornaments.

Casting involves a complex process that requires a lot of skill and masterfulness in the two techniques that are practiced: wax and sand casting. Gyalsey Tenzin Rabgye, 13th Je Khenpo (a religious authority) of Bhutan, mastered wax casting, and crafted 1,000 Buddha, including the main Buddha at the Punakha Dzong. 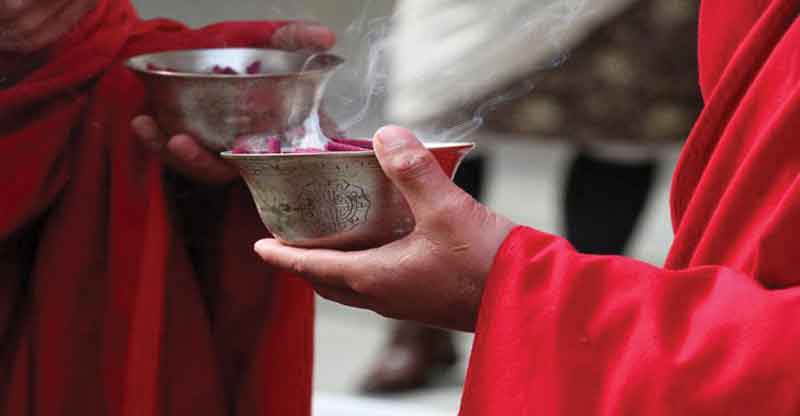 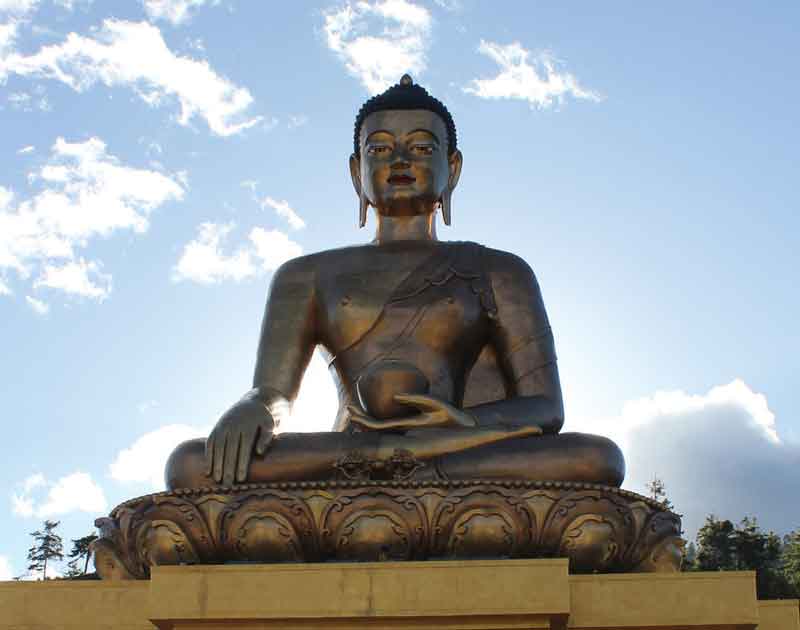 Woodwork is the skeleton of Bhutan. A lot of care and skill goes into the construction of every building, bridge, temple, institute, palace, and Dzong. The master carpenters, known as Zow chen, are the architects of the country, and they excel in creating true masterpieces. Dzongs that were built in the 17th century are vastly appreciated for the detail in their design and structure. A key example of a beautifully built wood structure is the Punakha Dzong. 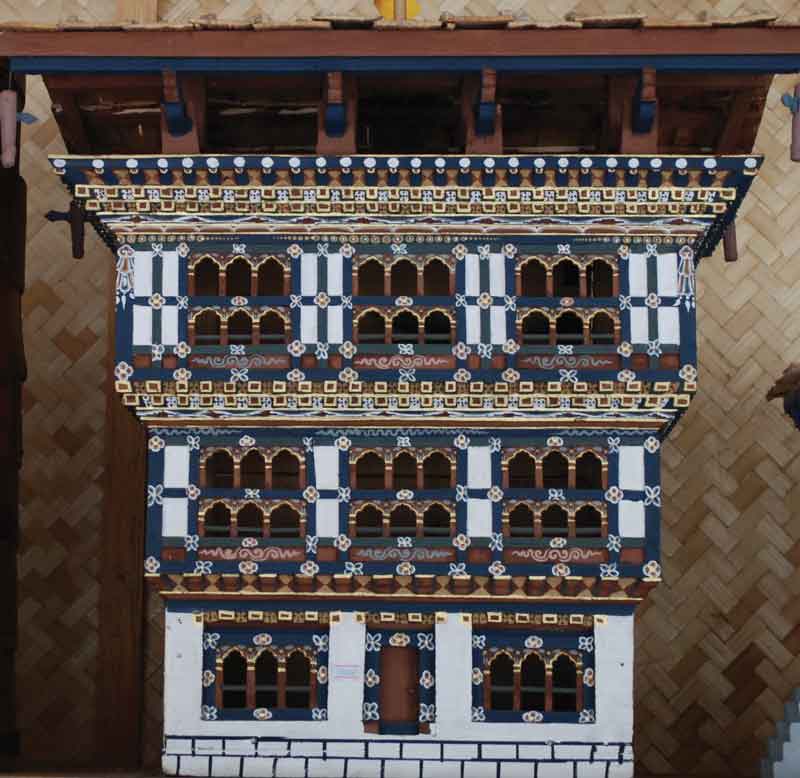 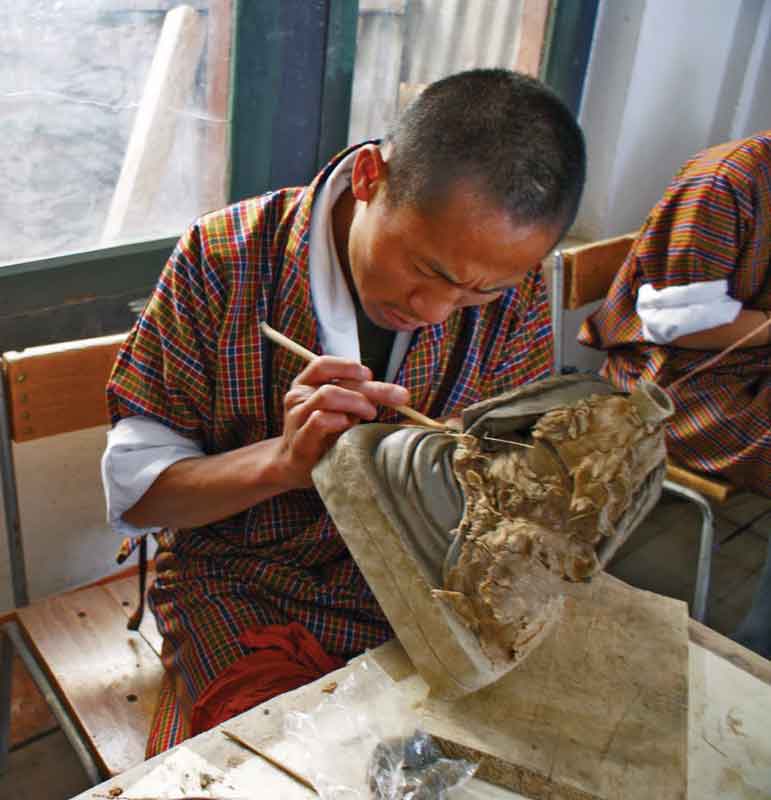 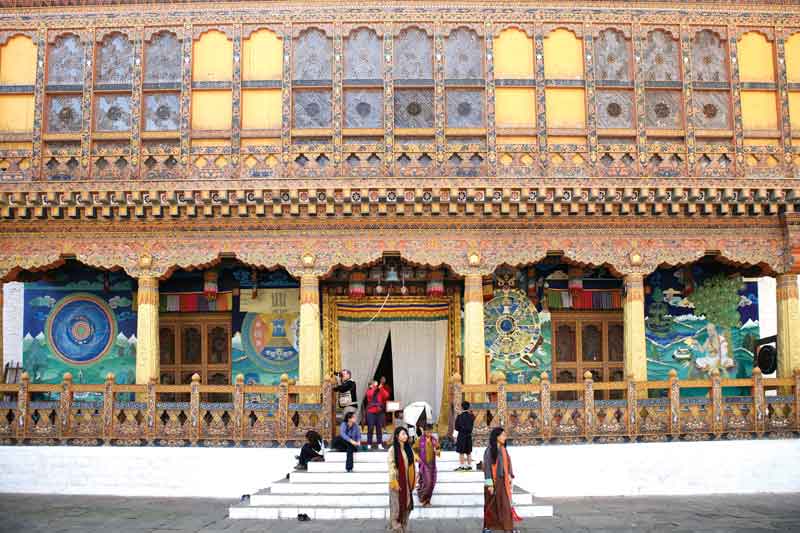 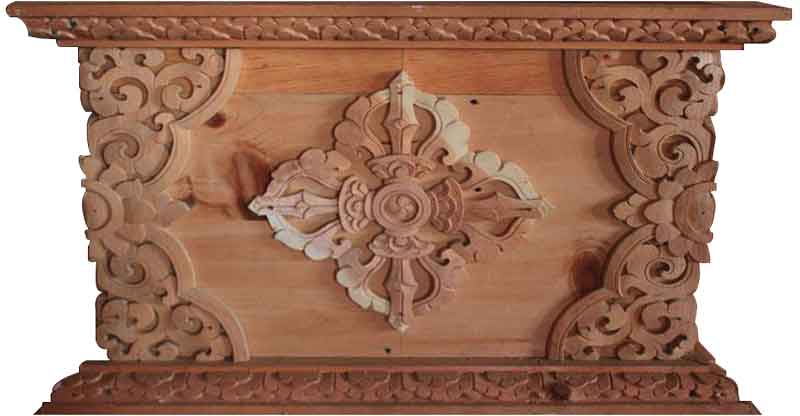 Masons work closely with the carpenters with a different kind of artistry and sophistication that complement each other. Every structure is built by a combination of wood and stone. Stone is used in Dzongs, courtyards, walls houses, bridges, and Chortens, which are meant to keep religious relics inside. The senior master-mason, zope in Bhutanese, is the one who supervises the construction of stone structures and the preparation of the traditional and durable mortar that has been passed down generation to generation. One example of a prominent stone structure in Bhutan is the Chorten Kora in Trashiyangtse. 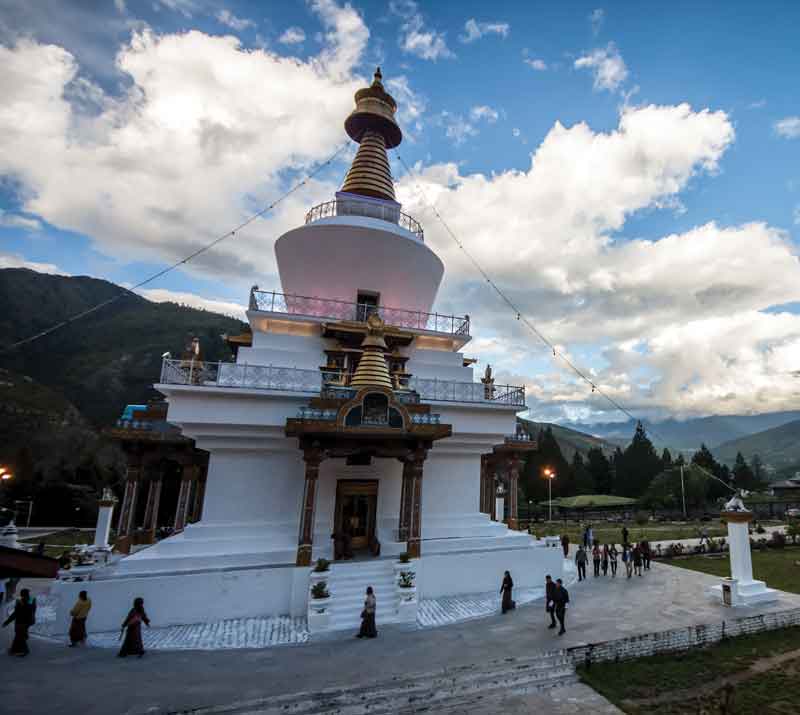 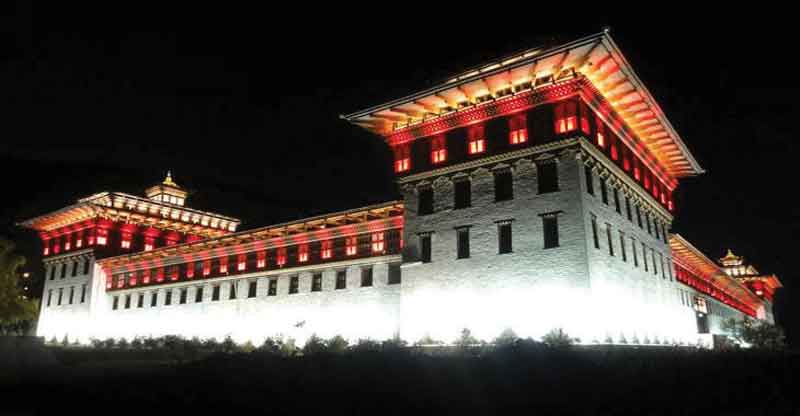 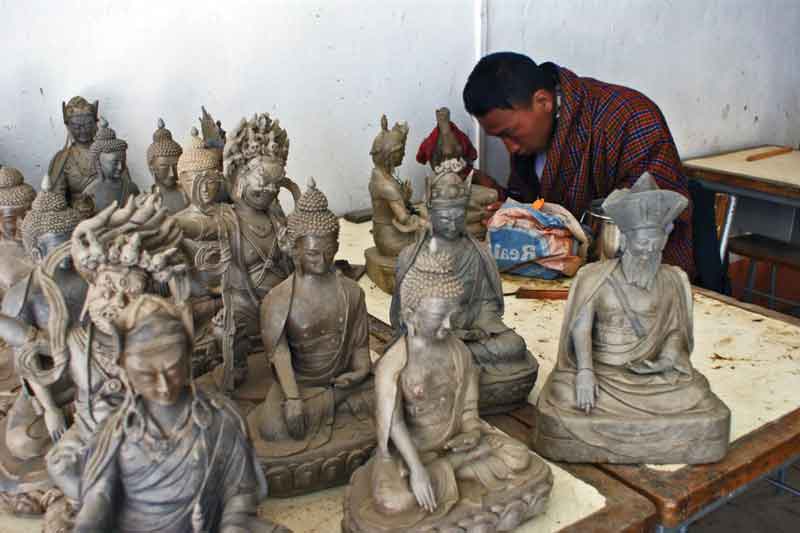 Once the structures are standing, the carver takes over with extraordinary precision to engrave from wood and slate to stone and paper. Mantras, deities and cultural motifs are carved into traditional masks, phalluses used in religious festivals, windows, doors and every other possible surface. Wood is the most important form of carving, due to Bhutan’s rich variety of woods. It was introduced in the 13th century by various schools of Tibetan Buddhism. 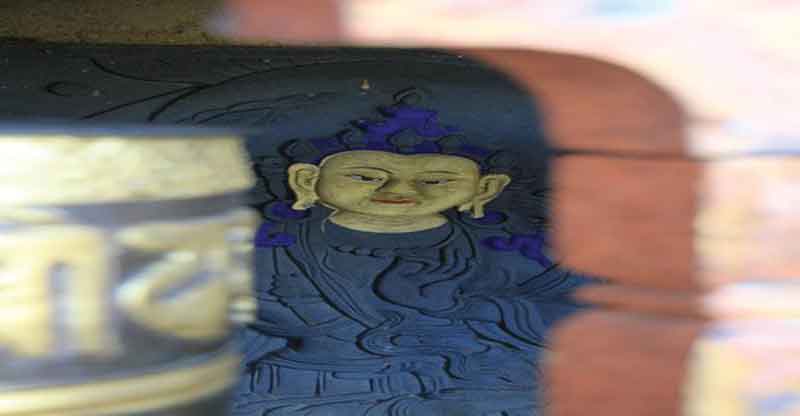 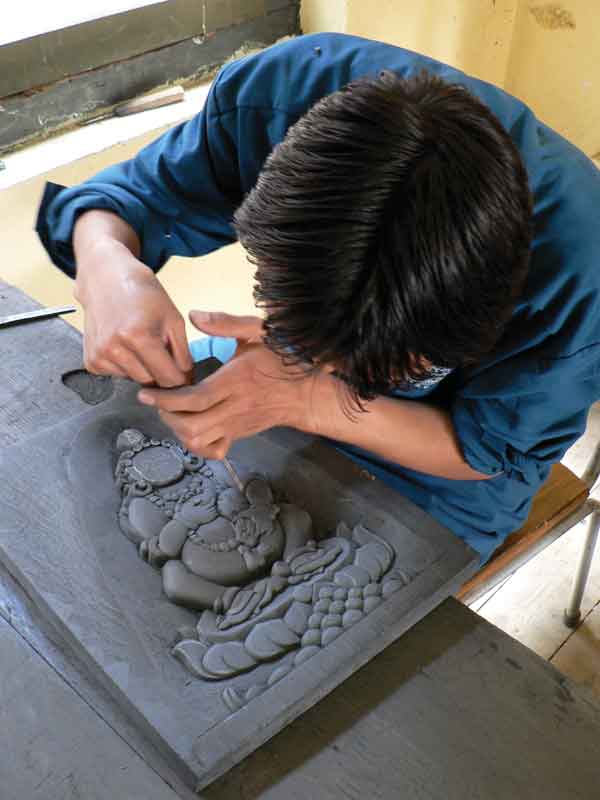 The rest of the arts and crafts include wood turning (Shag-zo), blacksmithing (Gar-zo), gold- and silversmithing (Troe-ko), bamboo work (Tsha-zo), tailoring, embroidering and appliqué (Tshem-zo), and weaving (Thag-zo). Each one of these arts and crafts has great cultural and historic value, and Bhutan continues to preserve them with dedication and respect. 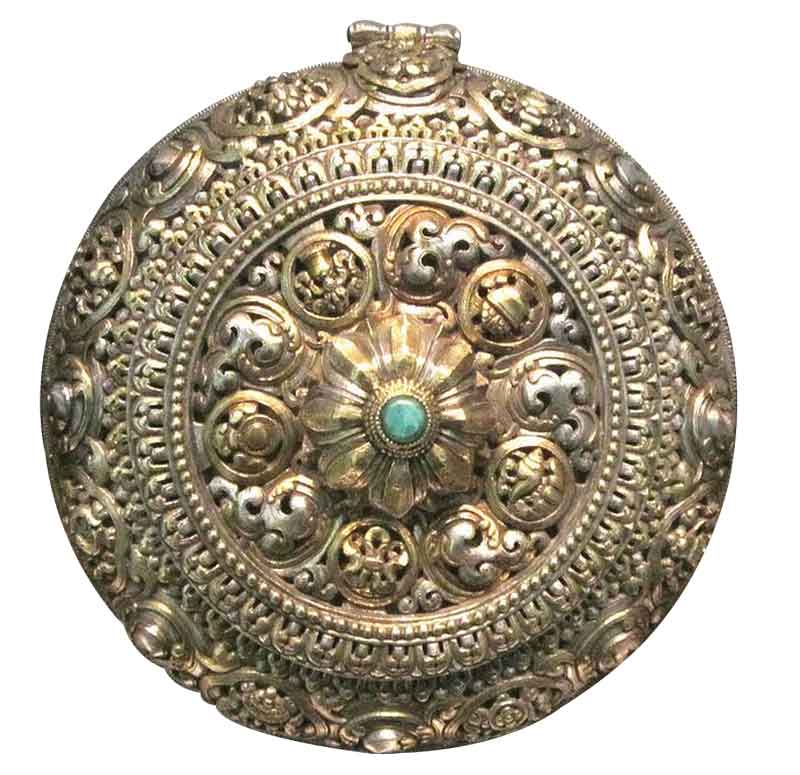 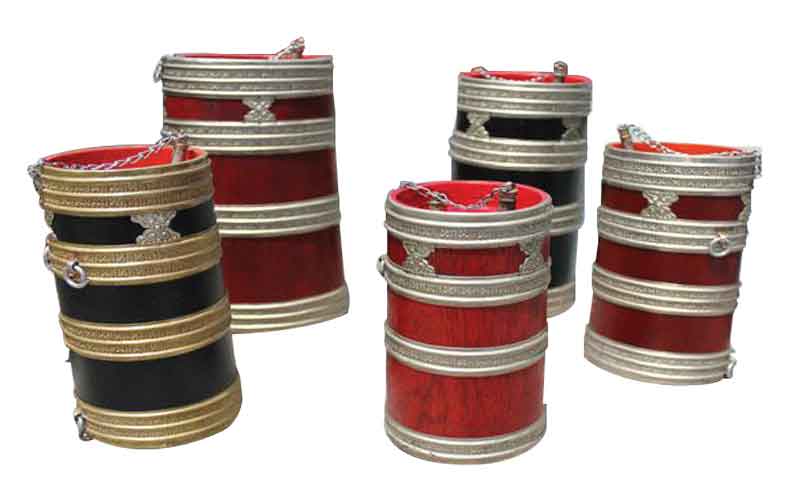 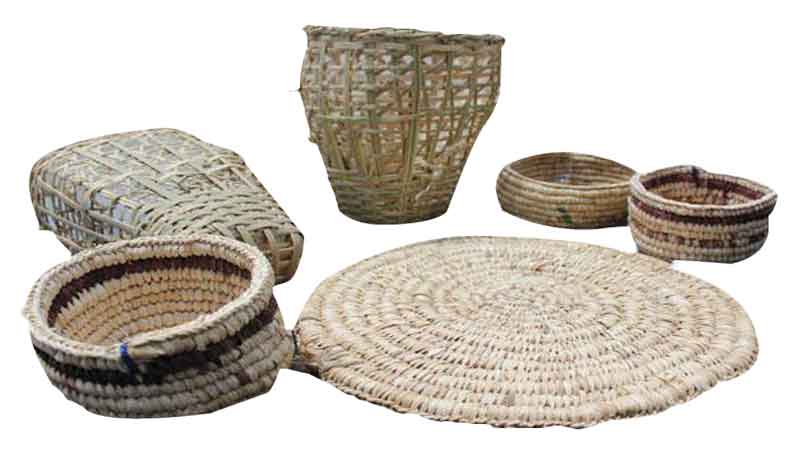 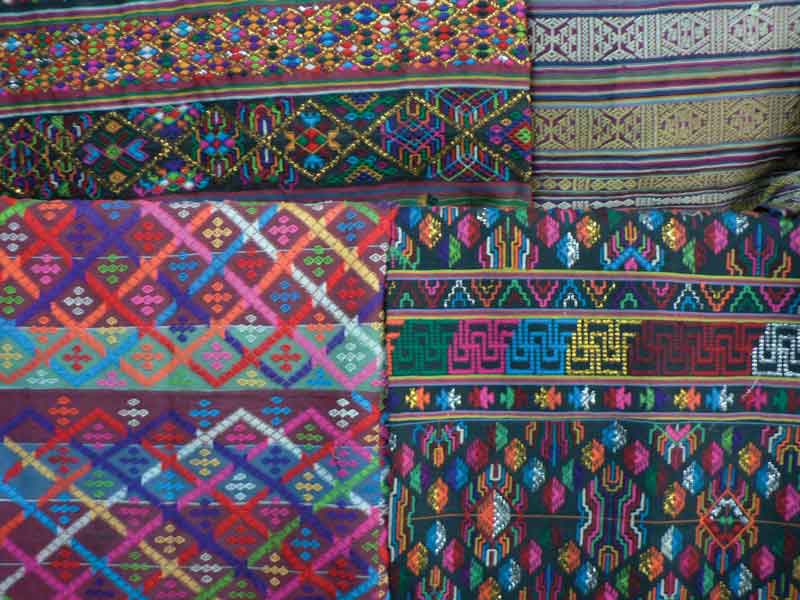