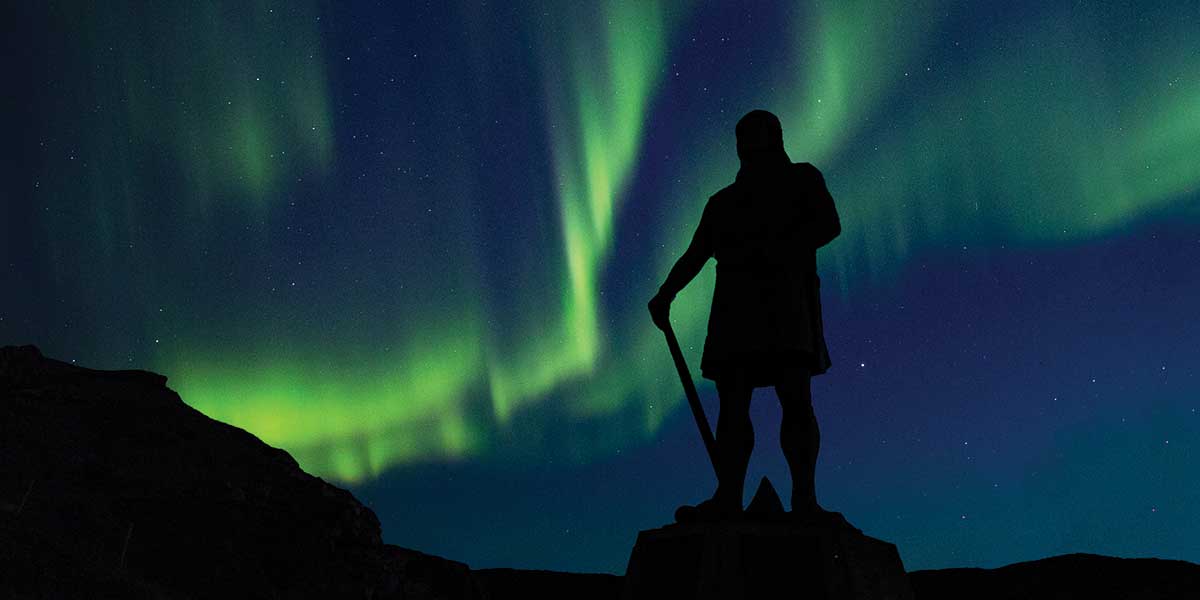 Discoverer of “the green earth”

“I’m not called to discover more countries than this one in which I live now. The trip is over, for me at least.”
- Saga Thorfinn Karlsefni and Snorri Thorbrandsson (Saga Erik the Red).

Greenland was discovered by the Viking Erik the Red about 982 AD, when forced into a three-year exile for crimes committed, he decides, as his father did for the same reason, to flee from Norway to Iceland, and undertake the route west from Iceland; since the Middle Ages, Icelandic sailors had knowledge of the existence of the island.

Erik (called Eiríkur Thorvaldsson, but dubbed the Red for the color of his hair and beard, as well as for his temperament), explores the southeastern Greenland coast during the three years of his exile, discovering an area of ​​ice-free fjords and with abundant grass for cattle. In this way, once his exile is over, he returns to Iceland and convinces around 500 men to accompany him in the colonization of the new territories, which he called Green Land, with the purpose of inspiring the imagination of the new settlers , although, most likely it was that at that time the territories visited by Erik were indeed a Green Ground.

Thus, in the year 986, 25 ships were shipped that departed from Iceland loaded with settlers, construction materials, livestock, seeds... necessary for colonization. Due to a series of misfortunes, only 14 ships managed to reach Greenland. The landing point was Brattahlíð (Brattahlid, “sloping slope,” nowadays Qassiarsuk) located at the bottom of today called Eiriksfjord. A part of the group continued to cost westward, naming all the fjords in its path according to the members of the group, and forming a second settlement in the current Nuuk, the Western Settlement. In two Icelandic sagas, “Saga of Erik the Red” and “Sagas of the Greenlanders” the events happened to the Vikings during the colonization of the island are collected.

During the first part of their stay, the Vikings benefited from a time with a particularly warm climate, which contributed to their expansion (they reached 5.000) and to the good progress of agriculture and livestock. One or two ships from Norway or Iceland arrived annually on the island, with which they had quite beneficial commercial relations, since in Europe walrus fangs, polar bear skins or narwhal horn were highly appreciated, and in exchange for which obtained construction materials and articles of difficult access on the island such as wine. 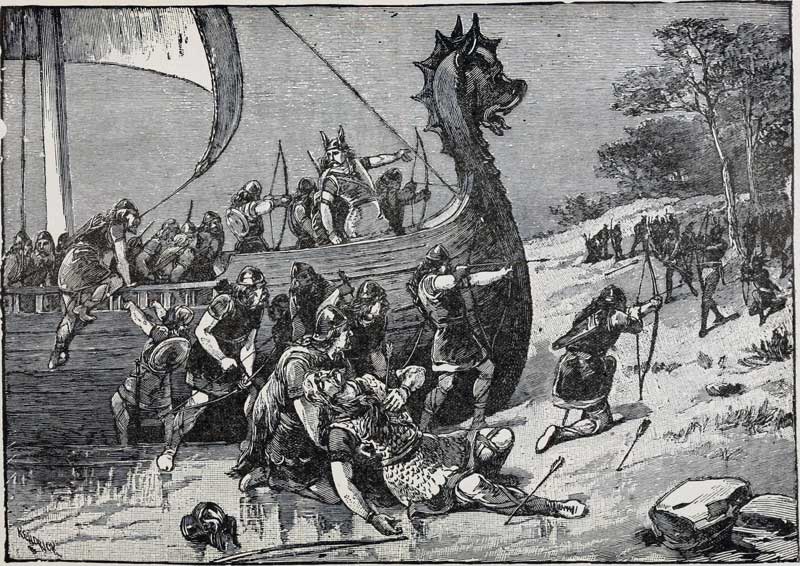 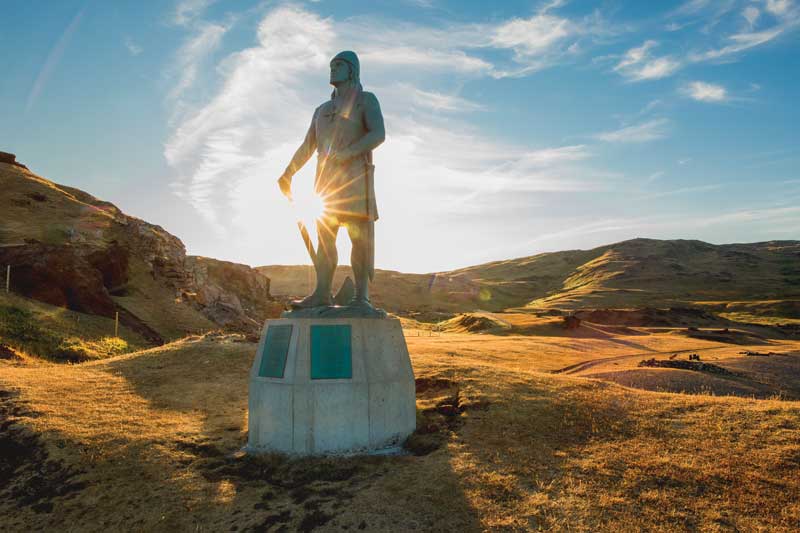 Statue of Leif Eriksson, “the fortunate” taking care of his territory.

Around 1.000 A.D., on a trip to Norway by Erik’s son, Leif Eriksson, the king commissioned him to take the Christian religion to Greenland, converting his mother, among others. Thjodhilde demanded from her husband Erik the construction of a church for her “rites” but this one, who still remained faithful to her Nordic gods, refused. She pressured him through sexual abstinence as long as he did not build the church, to which Erik finally gived in and built the first Christianity church in America in Bratthalid, from which today the foundations can still be seen, as well as a reconstruction carried out on the occasion of the millenary of the discovery of America by the Vikings.

According to the sagas, Bjarni Herjólfsson, an Icelandic merchant who was making the trade route between the islands of Iceland and Greenland, lost his way once, getting to observe a territory further west of the Greenlandic coasts. He tells his trip to Leif Eriksson, who decides to explore the coast in more detail. Although Erik the Red was going to accompany his son, on his way to board he fell off the horse and this prevented him from being part of the discovery of the American lands. Leif Eriksson treads American land for the first time, giving name to the discovered areas: Helluland (“Land of the flat stones,” Baffin Island), Markland (“Land of the forests,” Labrador Peninsula) and Vinland (“Land of the grapes,” Newfoundland or Quebec according to sources) where it establishes the settlement of Leifbundir. This settlement did not last long due to continuing disputes over the favors of the few women in the settlement and clashes with local tribes. After the abandonment of the settlement, routes to Markland continue to be made for the supply of wood and the last trip was made around the 14th century. 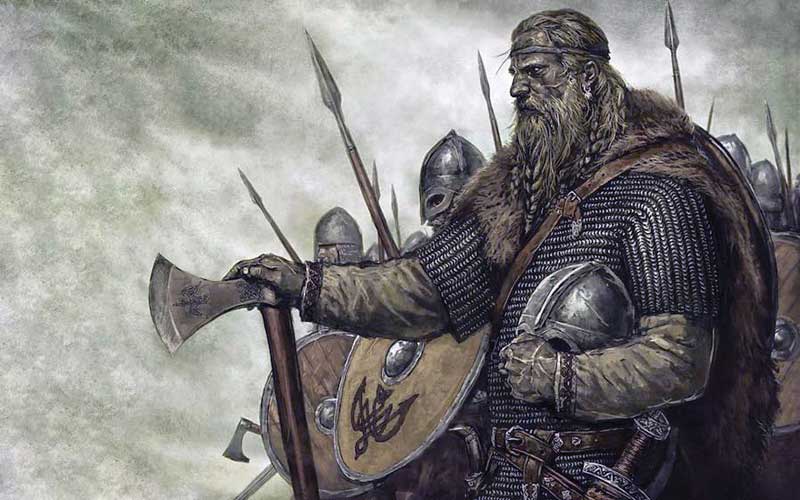 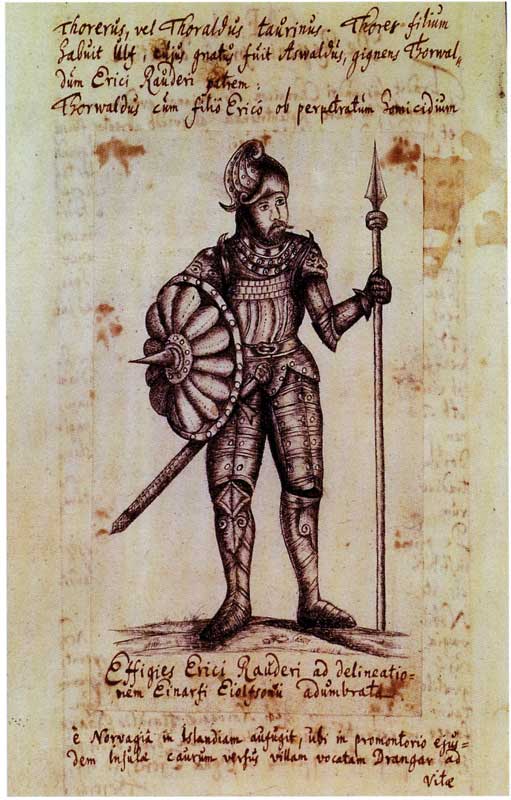 Descendants of EriK the Red in Greenland

Erik and his wife Thjodhilde had four children: a daughter, Puríör Eiríksdóttir and three boys, Leif Eriksson, Thorvald and Thorsteinn. From another marriage he had a daughter, Freydís Eiríksdóttir.

Leif Eriksson is known as the first European to travel to North America and in Brattahli One, one of the areas where the Norse settled, known today by his current name Qassiarsuk, a statue has been erected in his memory; leaning against a heavy battle ax, he looks at Eric’s fjord, named after his father. The famous Viking Eric the Red and Leif seem to watch over the community while at the same time looking restless towards the horizon.