Azimut was present at the F1 Grand Prix of Mexico 2015 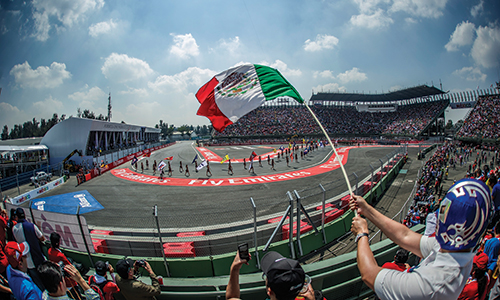 The outstanding particiation of Mexico in the Formula 1 (F1) begun in 1961 with the appearance of Ricardo Rodríguez in the Monza circuit during the Grand Prix of Italy; since then, Ricardo, algonside his brother, Pedro Rodríguez who ran the F1 circuit in 1996, fully gave in to this automotive sport. On November the 1st, -after 50 years of these adventure -  after 23 years of absence from the F1 in Mexico, the autodome track of the Mexican capital, has returned to the calendar of the maximum automotive category in the soportive world to carry out a Grand Prix.

In this occasion the return of the F1 to Mexico added the particpation of “Checo” Perez, who after his arrival to the GP podium of Russia, has created quite an uproar in the world circuit. The pilot of the Force India Scuderia, with the Claro-Telemex-Telcel-Infinitum seal, was the first to run a Grand Prix at home in 45 years he said: “To have the chance of participating in a Grand Prix in my country is something I thought would never happen. It is going to be one of the most important moments of my carrer and without a doubt I can say that this race will be a modern classic of the Formula 1.

Amongst one of the most important aspects of the Grand Prix of Mexico, the experiences lived in the Azimut Yachts Mexico suite stoodout; directives of Azimut, such as, Ugo Garassino, who is the Director of the Superyachts division of Azimut S.P.A. (75’-120’ range), Jesús Orantes and Rodolfo Hageman, as well as their guests, had a first sight exclusive of the teams; as well as a privilaged vision to appreaciate the race; reason why the Mexico Circuit of the F1 was spectacularly  lived. 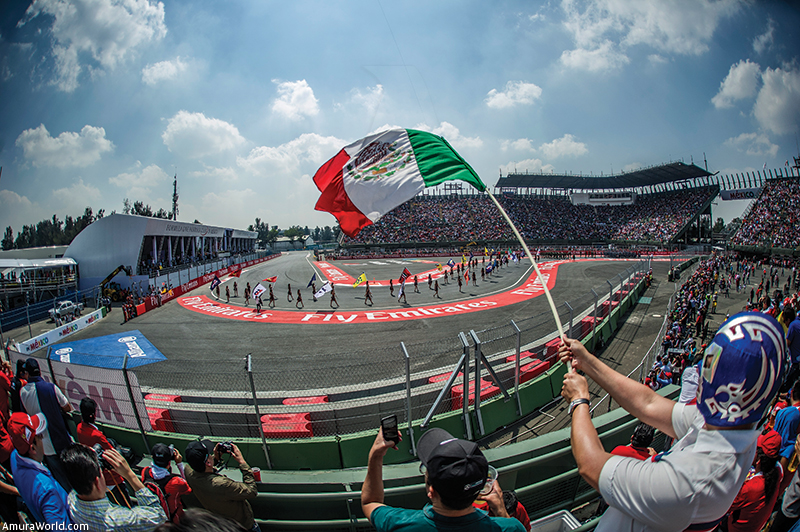 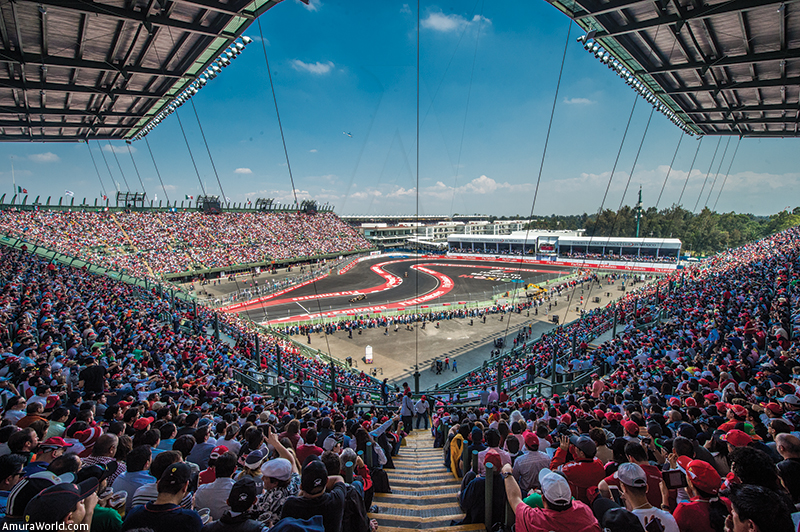 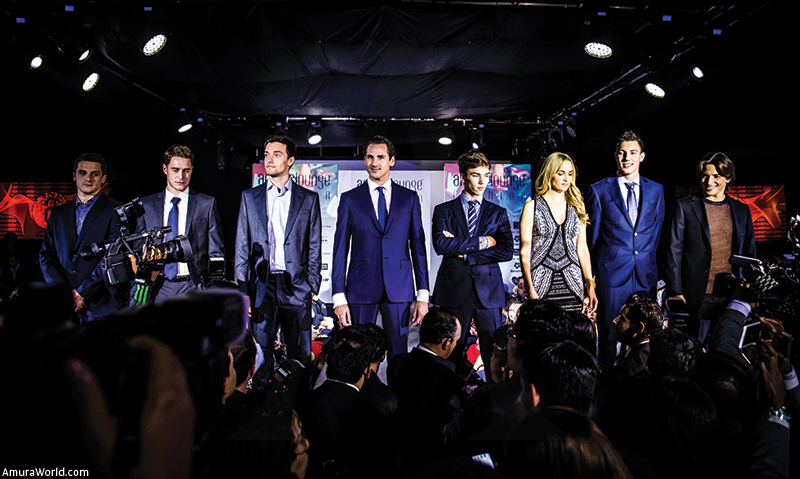 The return of the FI Grand Prix in Mexico brought with it the Amber Lounge party, rooted from the circuits of Monaco and Singapore; four European cities celebrated the event this year. This private event called upon several international jet-setters, it also had the presence of Azimut Yachts Mexico, who is an emblematic shipyard within the nautic industry since 1988; this shipyard is one of the sponsors that made this celebration a success.

Amber Lounge Mexico held as headquarters the Campo Marte Casino, where Sonia Irvine, founder and host of this festivity received several pilots, celebrities and businessmen, who enjoyed three nights (From October the 30 to November the 1st) life performances by several artists and international DJs, as well as a captivating fashion show, whose main characters were F1 pilots who displayed marvelous outfits.

“I am thrilled that Amber Lounge has taken place in Mexico City. After a 23 year absence from behalf of the F1, the people of Mexico were waiting expectantly the return of the Grand Prix. This was an unforgettable weekend”, said Sonia Irvine.

Amber Lounge will close it’s F1 season with an after party, prior the last race of the circuit, in Abu Dhabi, which will take place on November the 29th.

A few days before the race, during the inaugural press conference, some of the pilots remarked on their first impressions about the event. Lewis Hamilton, the current world champion for the Mercedes AMG F1 team, highlighted, “My strategy has always been to thoroughly attack. I, with my fellow pilots, am very excited to have the chance to participate. We are thrilled with the idea of leaving a mark in the return of the F1 to Mexico.”

Fernando Alonso, twice world champion from Spain, and pilot for the McLaren Honda team, said: “I was here a year ago and today the circuit is absolutely ready for the Grand Prix. A lot has changed. It will be a challenge for the mechanics to keep the vehicles on point.”

Pastor Maldonado, the 30 year old Venezuelan pilot for Louts, said: “It is difficult to predict without looking at the track from the car, but I am sure that it will be a grand event.” he added.

So far as who the Mexican people would choose for their favorite pilot, Checo Perez stated: “For me, it is a dream come true to drive in my country. I didn’t grow up with Mexican pilots, but I know that the Rodriguez Brothers were the most popular. They were huge. Unfortunately, they died prematurely. I think they had a lot more to offer not only to the sport in general, but to the F1, too. I just have to focus in what I do every weekend. Once I put on that helmet, it’s time to focus my attention to the normal procedure of each practice, ranking, and what follows. There will be a lot of pressure, but a positive one. It serves me as an enormous source of motivation to do well this Sunday.” he concluded. 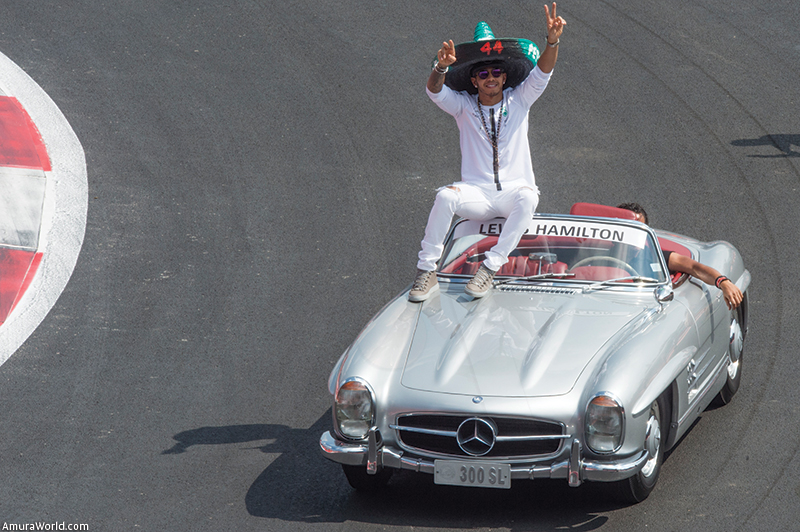 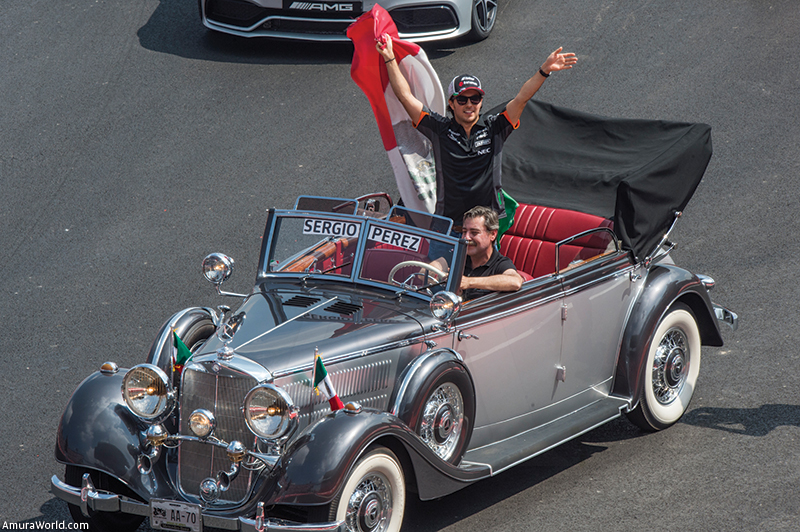 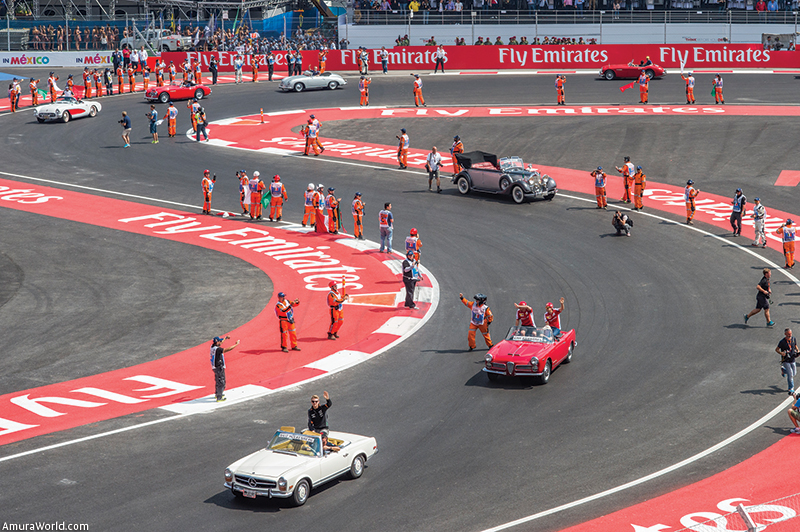 Practice and qualifying round

In the first practice session, which gathered 89,365 fans, Max Verstappen, from Toro Rosso team, had the best timing, running a lap in 1:25.990; Daniil Kvyat, pilot for Red Bull, was the second fastest, only three tenths of a second behind. They were followed by Sebastian Vettel and Kimi Räikkönen, of Ferrari, who shared the same timing with Kvyat, Lewis Hamilton, one of the fastest in the 90 minute sessions, finished 11th.

In the qualifying rounds held on October 31st, which gathered 111,964 spectators, Nico Rosberg beat his teammate Lewis Hamilton and secured a pole position for the November 1st race. For his part, Felipe Massa set the record for the fastest speed during the qualifying rounds, reaching 360km/h. Checo Perez, with a timing of 1:20.716, came in at 9th. While Daniil Kvyat secured the 4th position along with Vettel and his partner, Daniel Ricciardo, who came in 5th. Vlatteri Bottas de Williams came alongside his Australian teammate, and team partner, Felipe Massa, once again finished behind him. Max Verstappen, of the Toro Rosso team, stayed in 8th place, leaving the last two spots of the top of the grid to the racing cars of the Force India.

In the 10-lap Masters Historic Racing, Aaron Scott became the first winner of the weekend, taking advantage of the pole position to drive his March 761 at top speed. 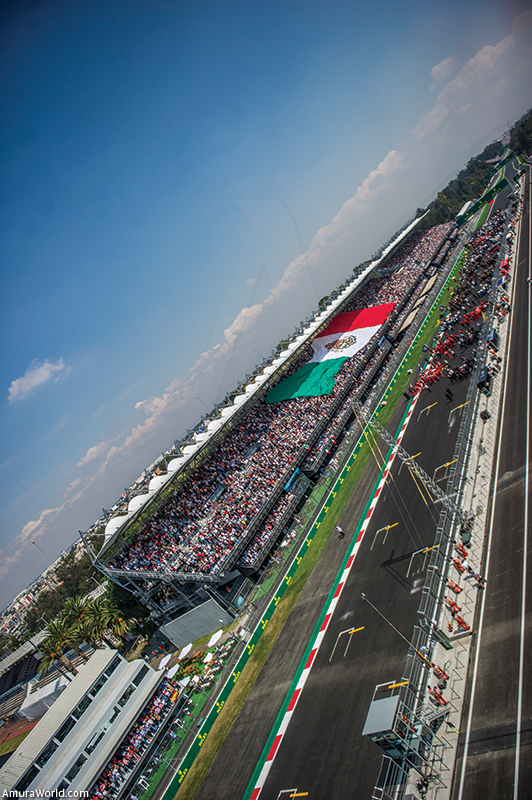 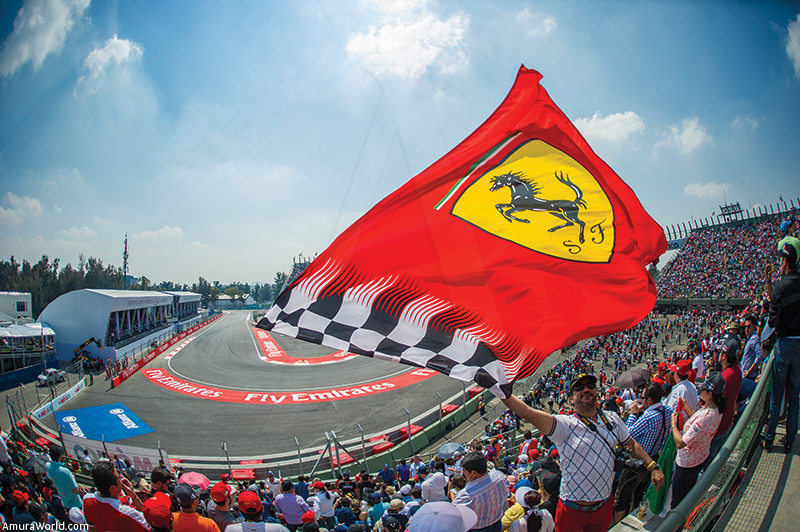 Road to the top

The Grand Prix Mexico 2015 was a milestone in the racing world. Not only for the number of spectators that attended during the three-day celebrations (336,174 of them; 134,845 fans on November 1st alone, making the Autodromo Hermanos Rodriguez the largest capacity racetrack in the world), but also because of the stature of the pilots and the teams that raced around the track.

Emotions were running high with the victory snatched by the British racer Greg Thornton on the second event of the Masters Historic Racing; who drove a Lotus 91/5 that once belonged to Elio de Angelis. Meanwhile, the Australian Luis Leeds showed his talents by taking the victory at the inaugural F4 NACAM race.

Afterwards, the traditional opening ceremony that began with the pilots driving along the track became an event never before seen in the history of the F1, as it was spearheaded by Bernie Ecclestone, who was accompanied by Carlos Slim Domit, CEO and Chairman of America Mobile, one of the main supporters of the long-awaited event; Alejandro Soberon Kuri, Chairman and CEO of Interamerican Entertainment Corporation (CIE) and president of the Formula 1 Grand Prix Mexico 2015, along with Smith Domit helped form the event over the course of six years; and Nigel Mansell, winner of the Grand Prix Mexico in 1992. 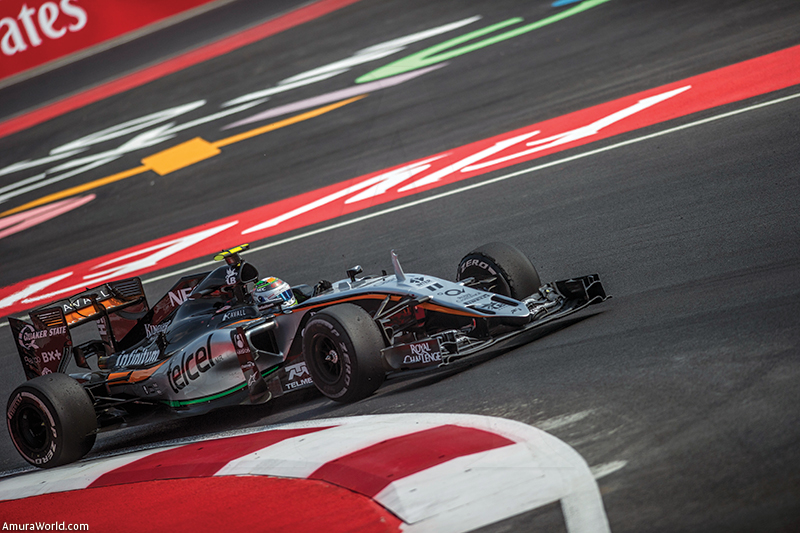 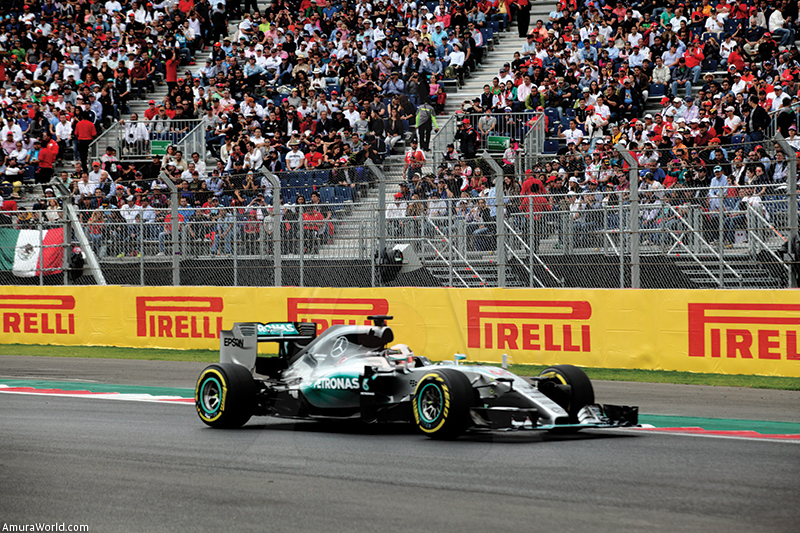 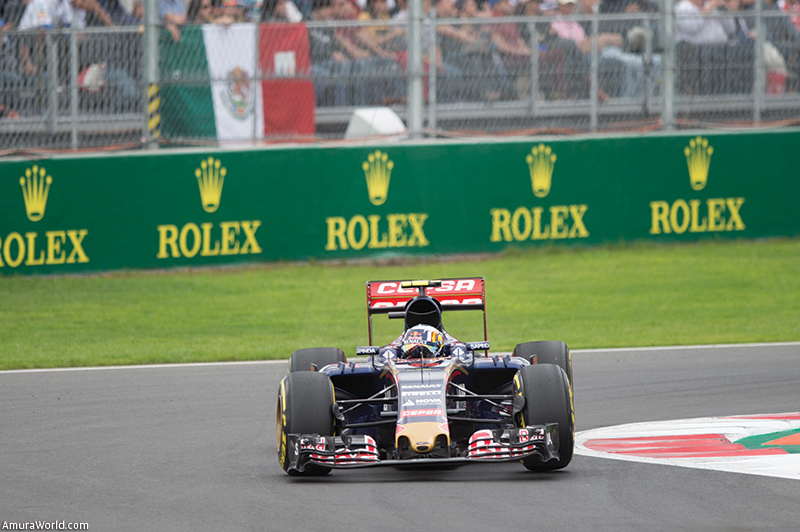 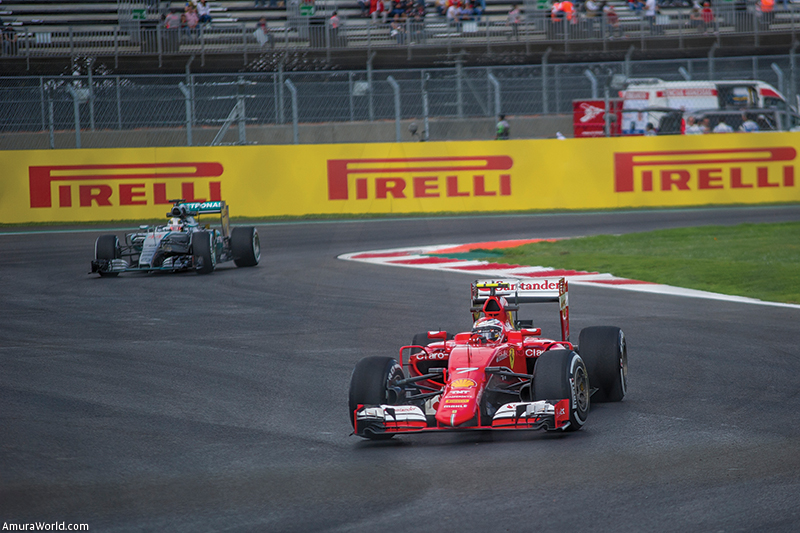 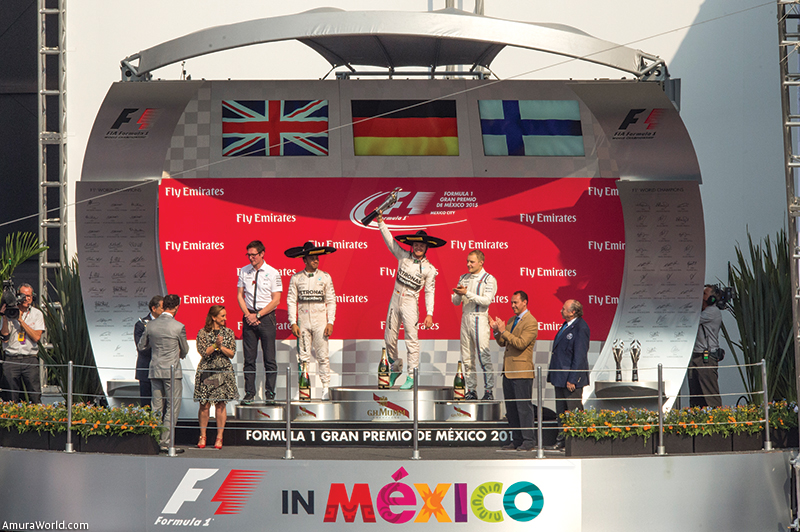 After an exciting race of 71 laps, Nico Rosberg managed to snatch the number one spot on the podium, followed by Lewis Hamilton, to achieve the 1-2 for the Mercedes team. Finland’s Valtteri Bottas, of team Williams, came in third place; local favorite Checo Perez came in 8th place, after speeding through his fellow pilots on the Foro Sol zone, first through Carlos Sainz, of Toro Rosso, and in the last laps through Max Verstappen, also of Toro Rosso.

The crowd was well pleased by the effort placed by the Force India pilot with the Claro-Telmex-Telcel-Infinitum badge, who kept his promised by not wavering during the entirety of the race. Out of the 20 pilots who began in the race, only 16 finished, and only one failed to complete a full first lap. Fernando Alonso reported: “Race finished, Lack of force.” From the cockpit of the McLaren Honda, and returned to the pits to retire his car. While his teammate, Jenson Button, began the race from the bottom of the grid to finish 14th place.

The award ceremony was presided by Claudia Ruiz Massieu, the Secretary of Foreign Affairs, who, since her days as Secretary of Tourism, worked for the return of the F1 to Mexico. She presented Nico Rosberg his trophy. Alejandro Soberon awarded Lewis Hamilton, and Horacio de la Vega, chairman of the Mexican Institute of Sport (Indeporte), awarded Valtteri Botas.

A word from the pilots

“It was the best podium of my life! Thousands and thousands of people chanting your name after winning in a spectacular race… it’s incredible! I felt like a rock star on stage, and enjoyed every moment,” said Rosberg after winning his fourth victory of the season.

“It’s fantastic to be here in Mexico. The crowd is like that of a football match. The fans have been incredible, I have never seen anything like this,” remarked an ecstatic Lewis Hamilton after being questioned by ex-pilot Nigel Mansell.

“This entire weekend has been impressive, and this Grand Prix has set the bar high. The Foro Sol is quite unbelievable, and the fans as well. It is beautiful to come to a new place, especially when a show like this is mounted. The opening ceremony was delightful, too. I had goosebumps. It was truly exciting to see so many fans cheering,” said Daniel Ricciardo, from the Red Bull Renault team, who occupied the 5th position. 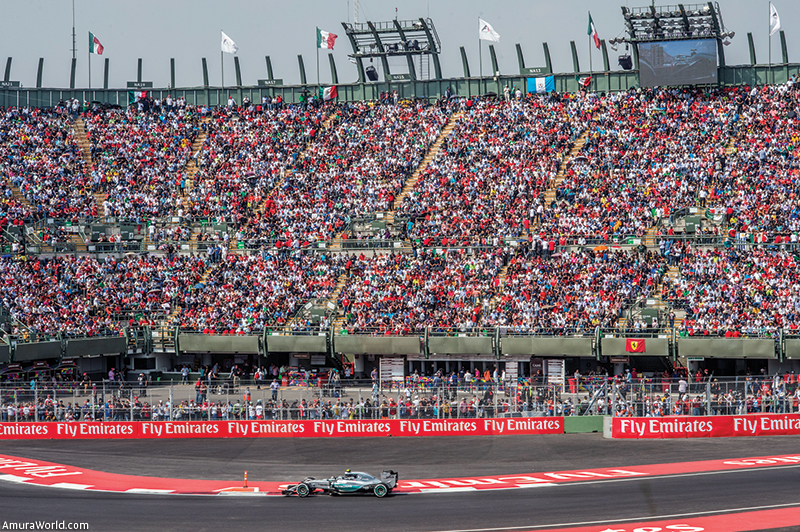 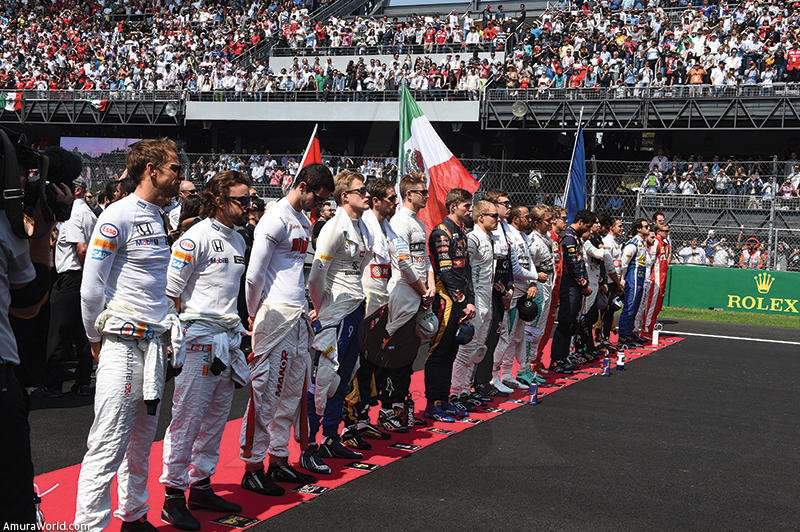 For his part, Checo Perez of Force India, commented “What a great weekend in Mexico! The atmosphere has been incredible, and there were many special moments. The race was probably one of the toughest of my career, as it was unfortunate for me when the Safety Car had to be used, since it did not assist me at all in my one-stop strategy. We decided not to return to the pit when it came out, thinking with a shot at passing Nico (Hulkenberg) and Felipe (Massa), but it didn’t happen. The team told me that the cars behind me had stopped in the pits to change tires, so I was a little worried knowing that the last 15 laps would be very tough. To stay in the lead and finish 8th place, it’s probably one of my best performances in F1 and I am very happy to have accumulated the points in front of the public. I am quite fortunate to have the support of my country, and I will remember this weekend forever. I believe that everyone was electrified by the energy from the crowd, and this will surely be one of the most popular races of today’s calendar.”

Finally, it would be well worth to remember that the founder and chairman of the Haas team, Gene Hass, gave the Mexican pilot Esteban Gutierrez a chance to compete for the team, when Esteban makes his debut in the 2016 F1 FIA World Championship.

“I knew Esteban thanks to a relationship with Ferrari, and after seeing his success in earning a spot here, it was clear that he is an excellent choice for our team,” Hass declared.