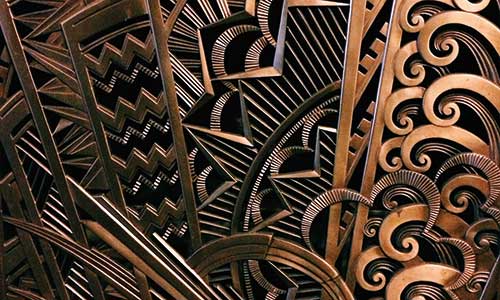 The ‘Golden Age’ of Montevideo

The architecture of a city reveals its identity to a world that remains observant and harbors relentless expectation of any sign of surging expressive and creative cultures. In Montevideo, Uruguay, the architectural design in the streets, squares and corners takes us back to the movement that originated in France and took over the world—prominently cities like New York and its skyscrapers—conquering South American countries like Argentina and Uruguay: Art Deco.

Art Deco, as a form of expression, engages in a conversation with its spectator, where stories of contemporaneity and the revolutionary avant-garde of the early 20th century are exchanged. In the 1920s, Montevideo flourished with European and North American splendor, and consolidated as a modern capital designed to represent the future of Uruguay—a building was not just a habitable structure with a simple and practical purpose: it was the representation of economic stability, technological advance and a society deeply involved in aesthetic appreciation. 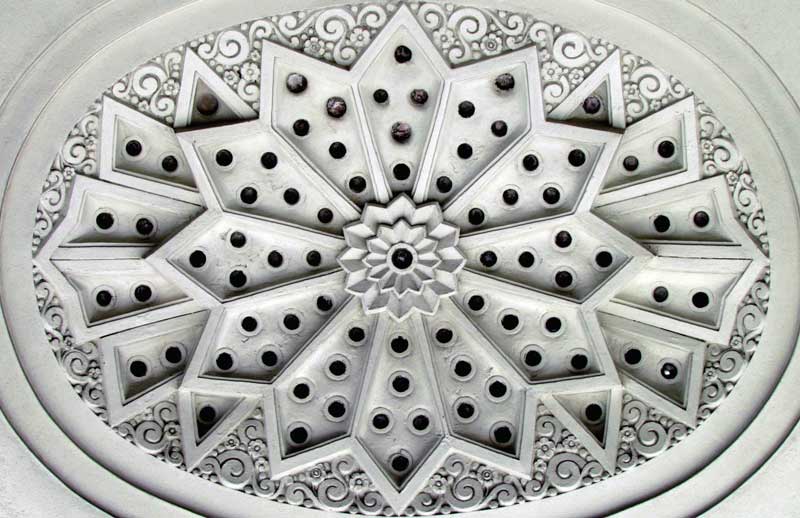 The use of opulent materials such as marble and metals are common in ornamentation. 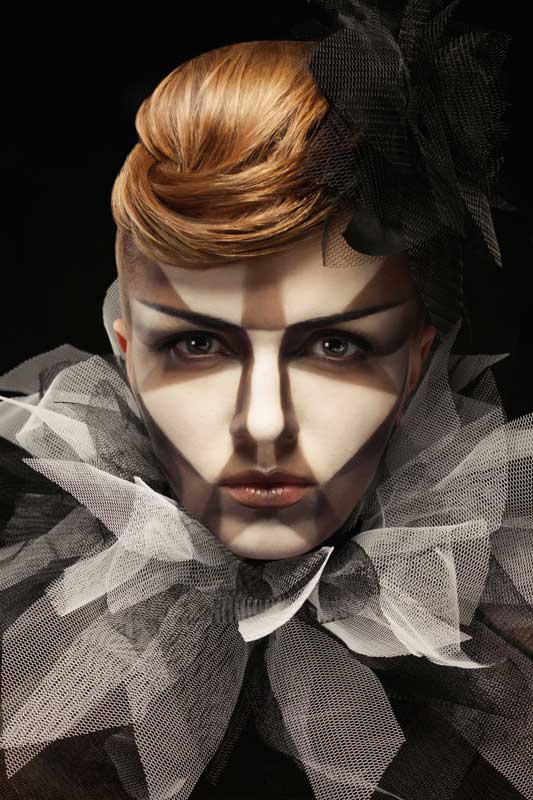 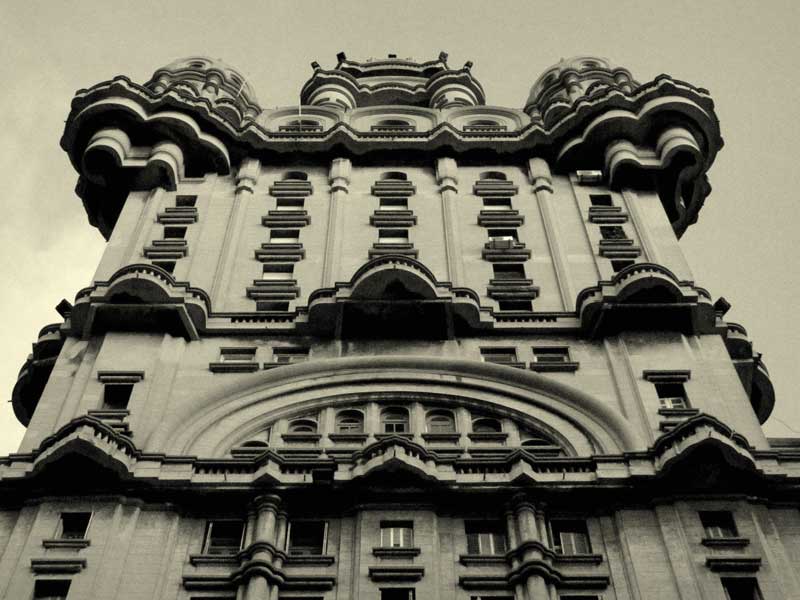 The architectonic gothic style from New York is present in Palacio Salvo. 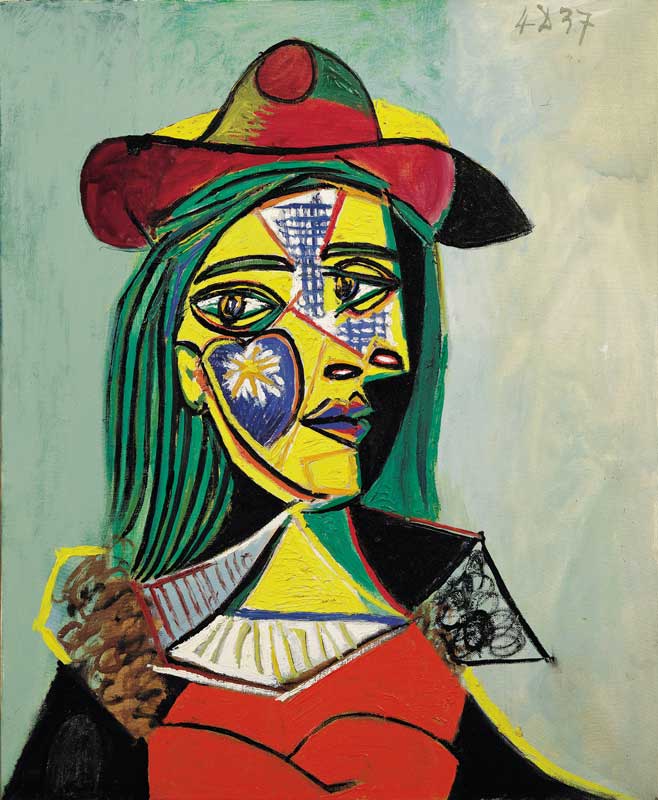 Cubism was part of the artistic movement from which Art Deco originated.

Modernism was born from natural subversion against the conventional, some might call, patriarchal system. It was present in painting, sculpting, literature, and of course architecture. Everything that was established and generally conservative began to be questioned and opposed, and it translated not only in visual arts, but into a lifestyle that only the upper classes were able to fully appreciate.

In modernism we find the free verse in poetry, seeking an active separation between free will and the imprisoning structure of a sonnet or rhyme; we find Cubism in painting, which behaved almost as an abstract anarchical rioter against Realism; Futurism was highly influential as well to epitomize the new century’s technology.

In architecture we see all of these elements, a sense of liberation, abstraction—the explicit need to go higher, to go bigger, to be more elegant, more opulent and extravagant. The early 20th century is desperate to see and live in the future, so they begin to build it. They saw buildings and palaces raised from the ground in structures that used elements like geometry, distribution of space and ornament to create something the world had never seen before. Streamline surged with maritime motifs, prominent in Florida. Just as in every aspect of the modernist lifestyle, buildings were designed to stand as glaring contrast between the normative and what is different. 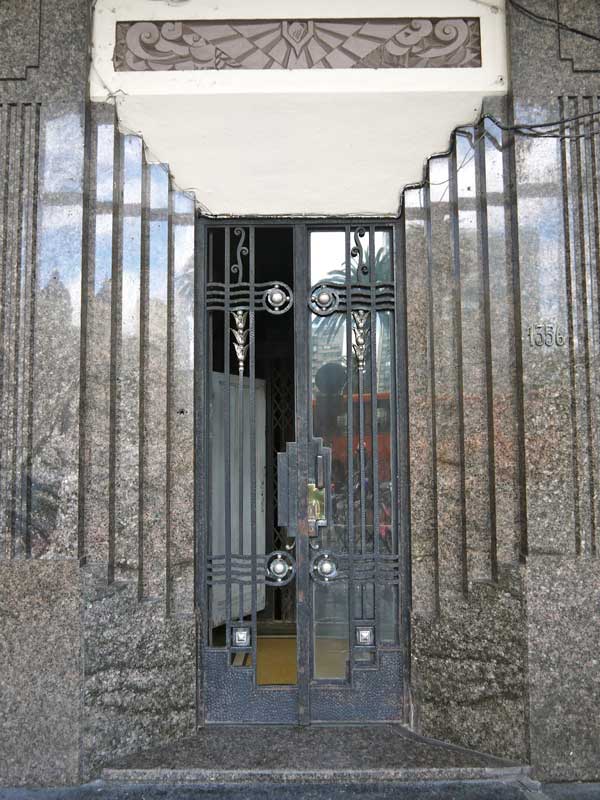 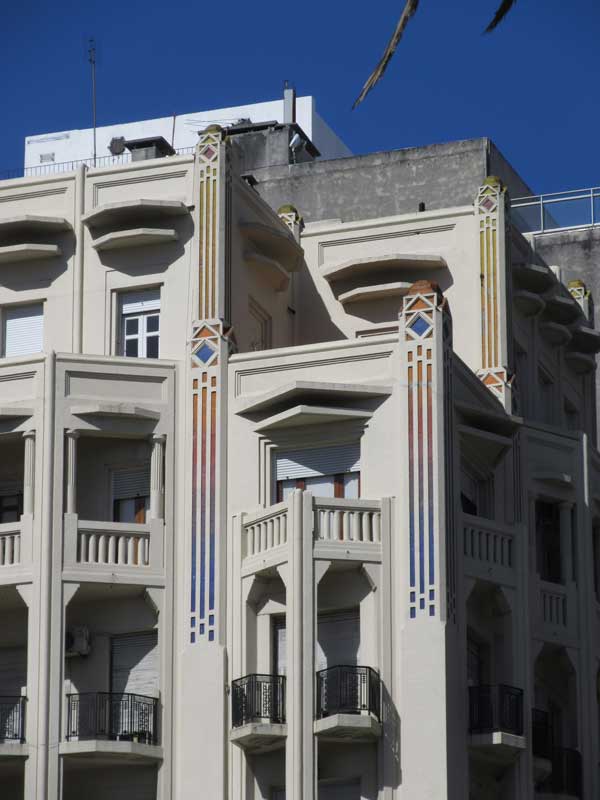 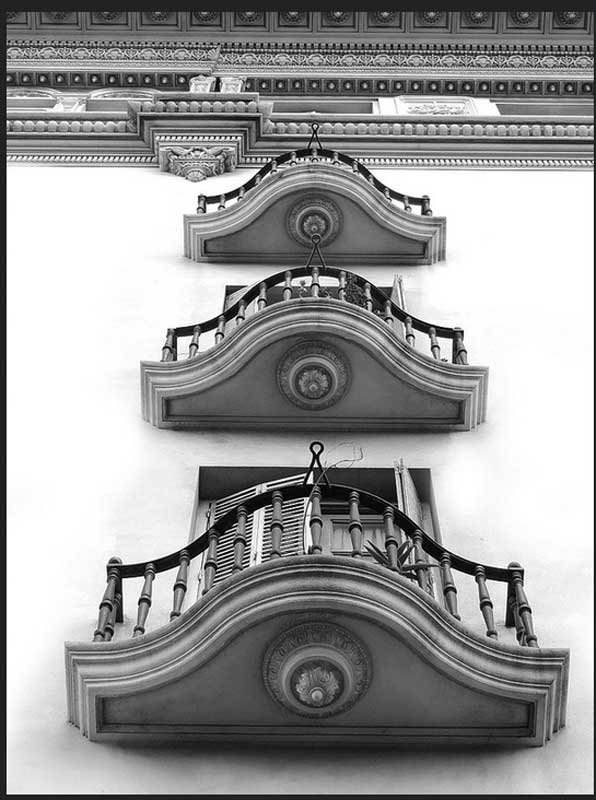 The Mac Lean building stands out because of the detail in bas-relief sculpted by Antonio Pena. 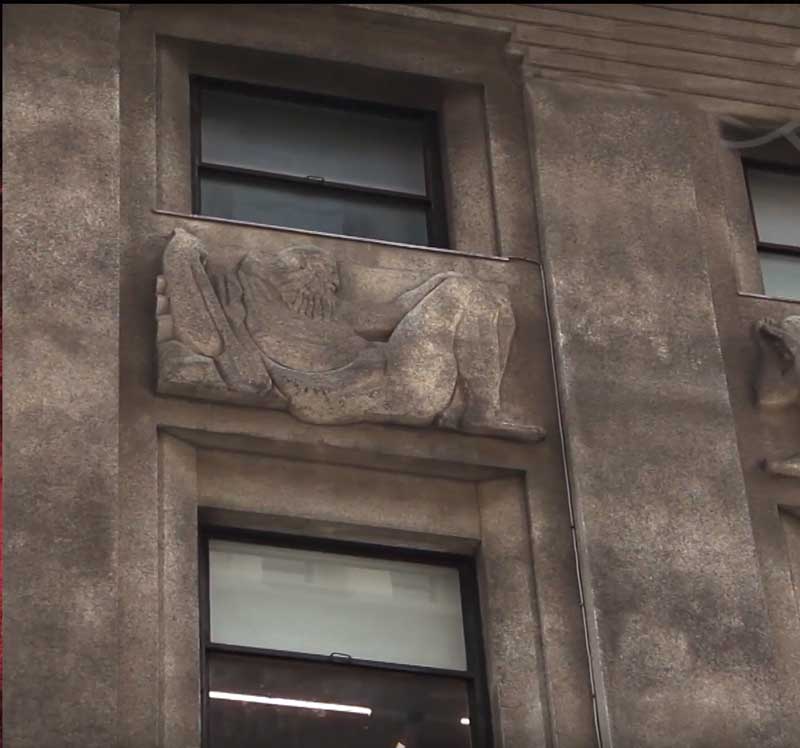 The ornamented balconies are inspired in the French architectonic style from la Belle Époque. 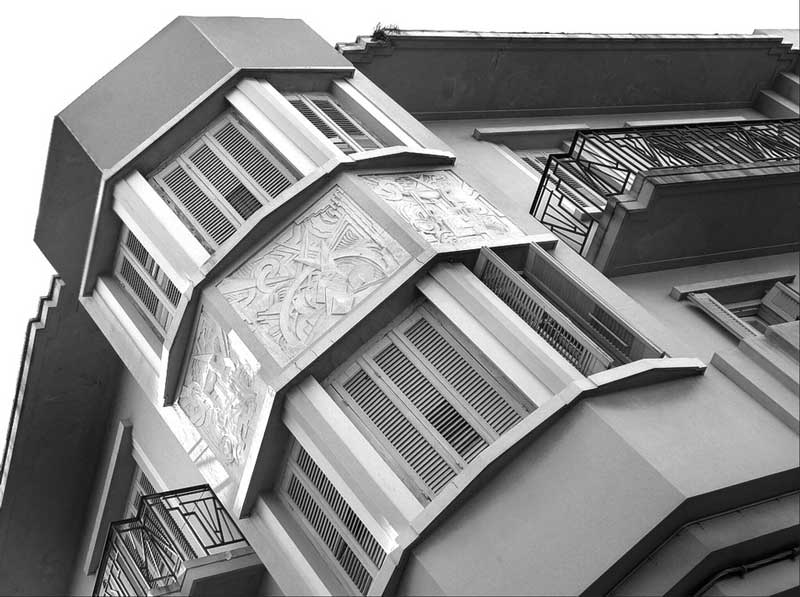 Montevideo: The City of the Future

Art Deco in Montevideo exists as a manifesto against the somber remnants of the First World War—the post-Belle Époque glamour—and a vision set on the next decade. The media, film, and art served as a vessel to export these tendencies that aspire to be a source of introspection, liberation, interpretation and pure visual appreciation.

Buildings, unlike culture, retain the characteristics of the epoch they represent. The people who inhabit them change and follow new trends, and thus structures become a monument of their decade or movement. In the 20s and 30s, Uruguay invested in the creation of new buildings that represented wealth and wellbeing. Even though this new-found prosperity only lasted from the 1920s to the 1940s, the new generations can still appreciate the testimony these structures provide, the way architecture has changed and what it has to say to new observers now that the long-coveted future is here.

Art Deco in Montevideo is mostly colorless, with curved and voluminous designs. We find classical influences where mythological figures are the source of inspiration for sculptures and engravings. Metallic ornaments were introduced to decorate façades and interiors. Geometry and hierarchy was implemented in the shape and organization in every construction, as well as iconography, wood work and stained glass. 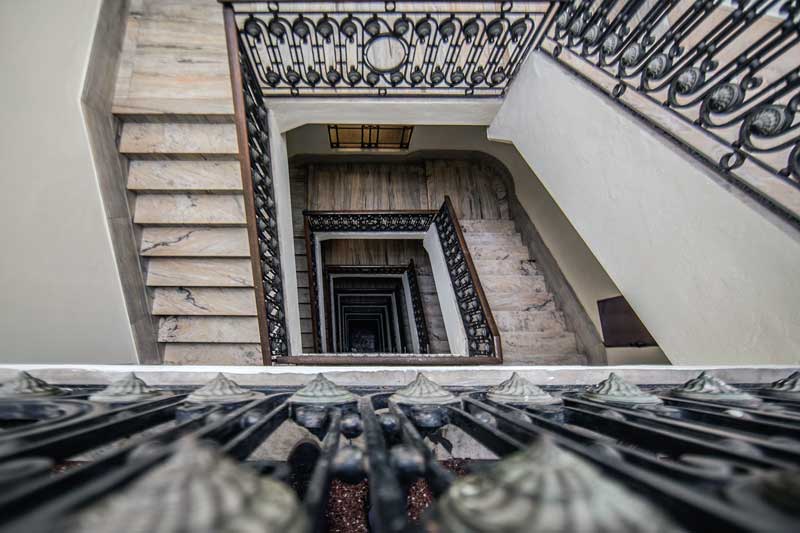 For a prosperous city concerned with its socioeconomic status and aesthetic appeal, skyscrapers and palaces were built all over the Old City and downtown Montevideo. One of the most famous ones is Palacio Salvo, located at 18 de Julio Avenue and Plaza Independencia. It was built in 1923, a 105m creation by Italian architect Mario Palanti. Representative of Art Deco, its interiors are decorated with Carrara marble, Germane granite, and oak. At the top of its ten stories, four turrets guard a smaller tower that culminates in a dome. It stands where the famous La Giralda café used to be. Palacio Salvo is a National Monument since 1996. 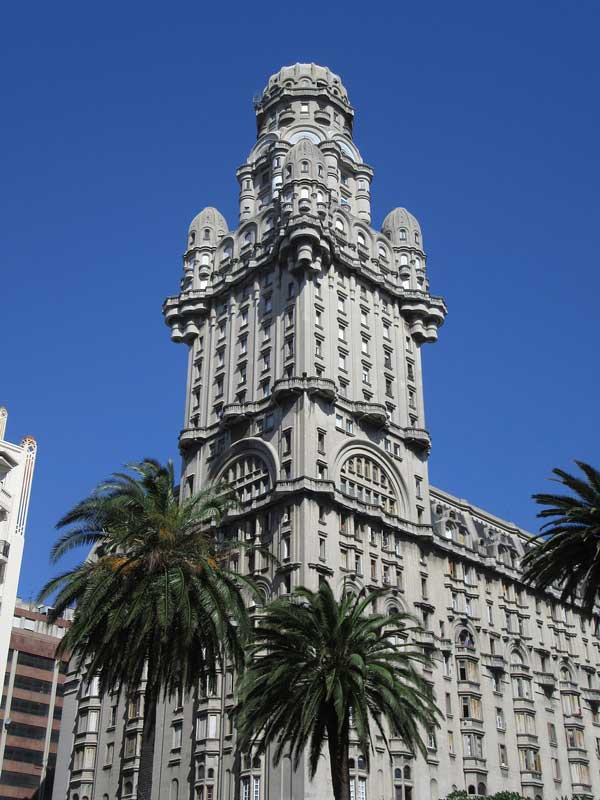 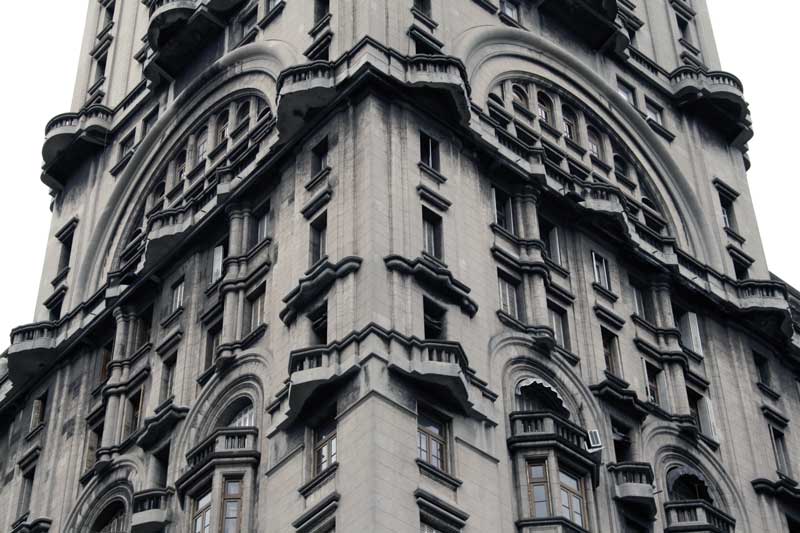 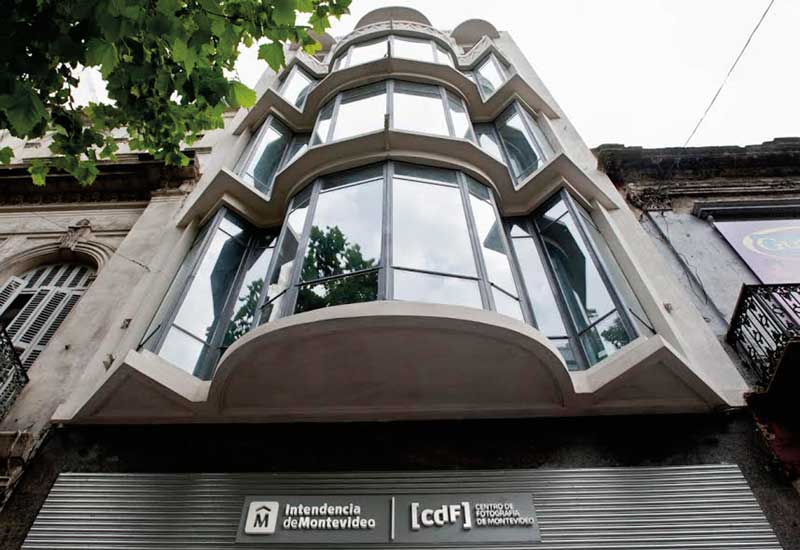 Structures emanated a sense of verticality, such as in the Mitre Bazar.

The former Bazar Mitre, located in 18 de Julio Avenue, was designed by Juan Genovese and Cayetano Carcavallo in the beginning of the 1930s. It was recently renovated to host the new Centro de Fotografía in 2015. It is long and narrow, and the façade is symmetrical, with glass panels that grant the structure transparency and volume.

It was named Art Deco in the 60s as a derivative of the 1925 Exposition Internationale des Arts decoratifs et industriels modernes in Paris. 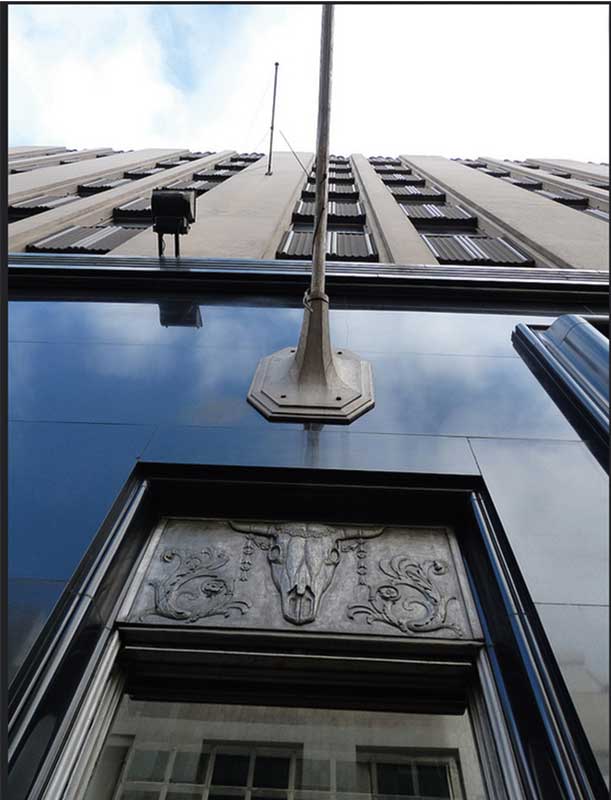 The Artigas Building was built symmetrically with a classic organization.

This is a building often compared to the skyscrapers of New York City: never too exuberantly adorned, but symmetrically organized with glass work and aluminum, plus a classical squared look. It stands in the corner of Rincón and Treinta y Tres, but has only one entrance. It was named after Uruguayan national hero José Gervasio Artigas. 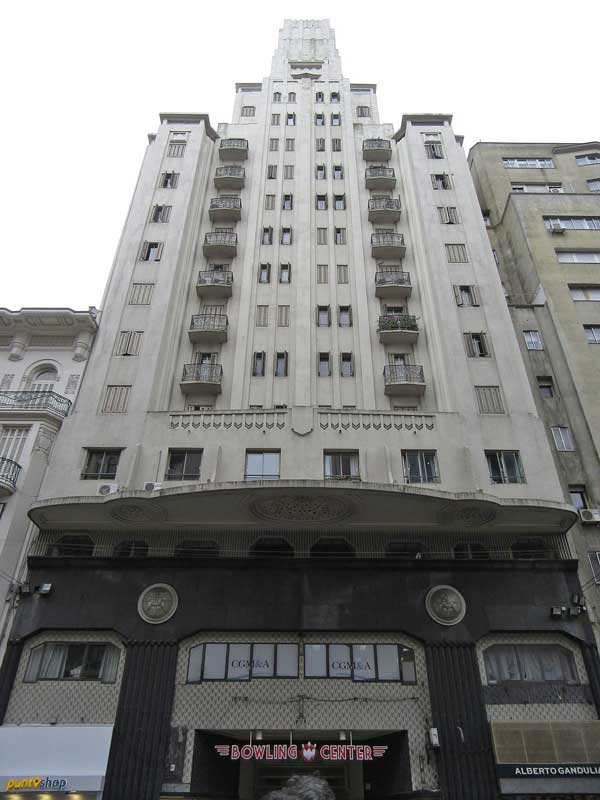 Palacio Díaz is one of the most emblematic and representative of Art Deco in Montevideo.

This is another example of architecture that alludes to the buildings of New York. It is a tall building, approximately 65m, with 18 floors, a vertical design and metallic details that accentuate the hierarchization of the structure. The lower floor extends upwards to the eighth floor, where the building begins to narrow, reminiscent of the Empire State Building. It was built in 1929 and conceived by Gonzalo Vázquez Barrière and Rafael Ruano.

It is currently known as the Santiago de Chile building. It was created by Francisco Vázquez Echeveste and built in 1933. Its curved design is based on its location on the corner of Santiago de Chile Street, in the Cordón neighborhood, east of Downtown Montevideo. The tower that rises on top contributes to the round geometry of the building and provides an element of sophistication.

The Yacht Club is located at the coast of Puerto del Buceo; with its curved, flawlessly symmetrical look, the nautical details and the futuristic aura that belong to the Streamline style, it looks like a ship at sea. It was designed by Luis Crespi and Jorge Herrán and was built between 1934 and 1938. It is a two story building with a tower that rises from the center up to accommodate guest suites. The distribution of space includes terraces and balconies that complement the abstract and expressionist feeling of the structure. 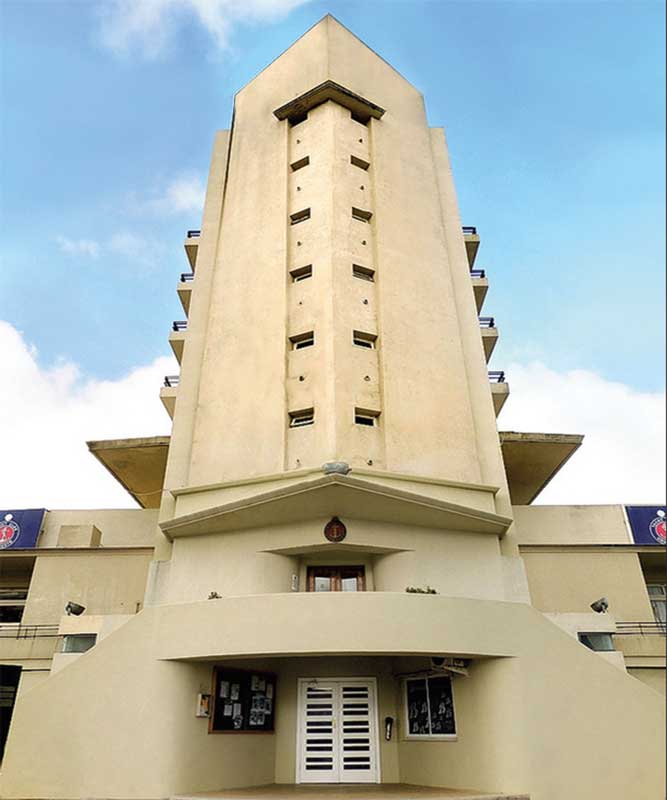 Streamline focuses on the movement and horizontality of a structure. 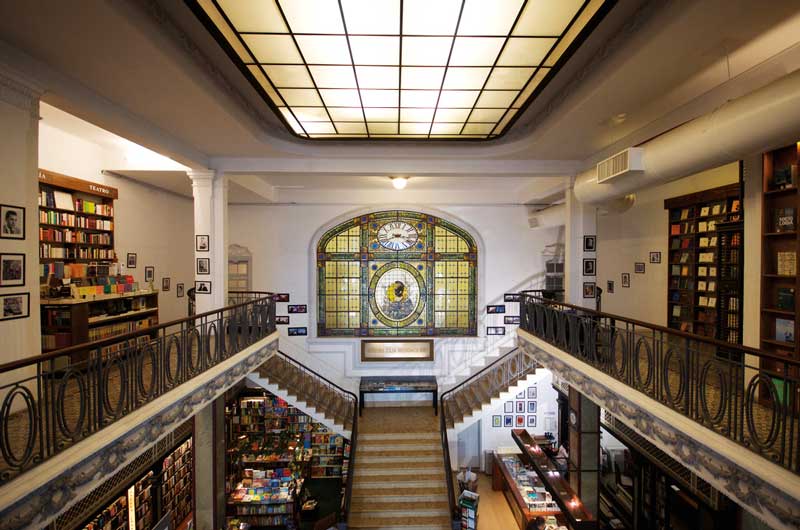 Art appreciation is nothing more than a different perspective, or a particular way to look at the ordinary and make it extraordinary. Art Deco in Montevideo represents an era of hope for a prosperous future, and though most of these buildings have entered a state of decay, many of them continue to be restored as an effort to preserve that bit of history. Montevideo successfully took a foreign movement and made it its own, with French, American and Italian influences, blended with a colonial spirit and Uruguayan personality.