Freedom flows over the waves 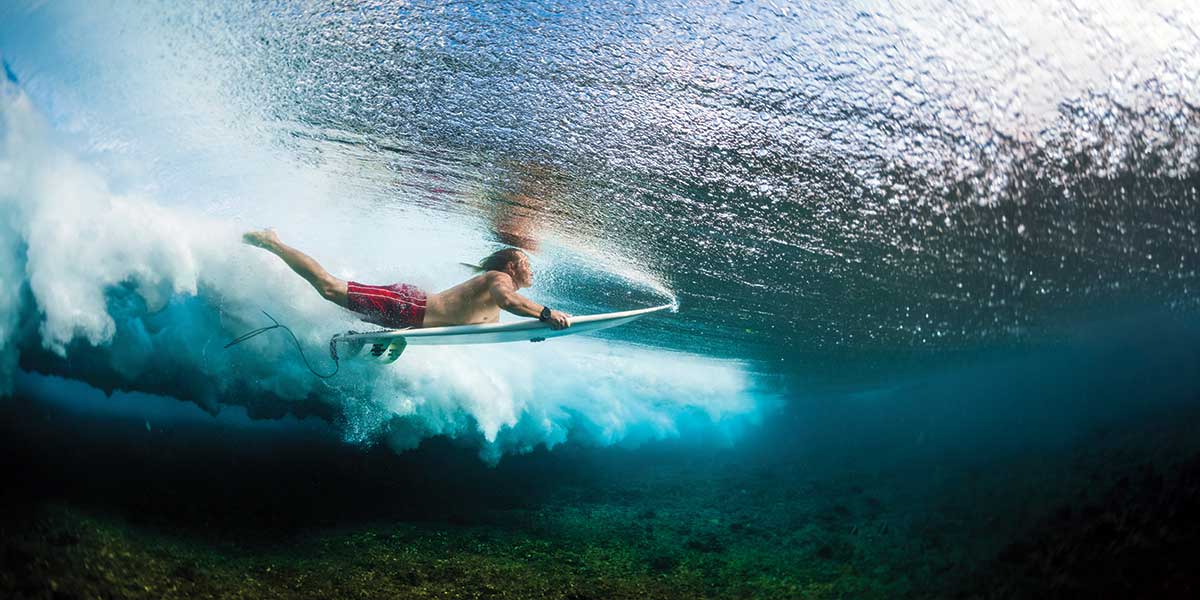 It is not only the extreme experience, but the immediate feeling of freedom that drives some of the most rigorous adventurers. The Maldives offer perfect settings to unleash the excitement of being alive.

Being able to flow on a big wave for the first time is a baptism towards a dimension that is only possible to know by surfing. More than 90% of the territory of the Maldives belongs to the aquatic environment, so the best way to reach the waves or activities throughout the archipelago is by boat.

The thrill of surfing in the Maldivian sea can be very powerful and challenging, but it also offers spaces where the waves roll up in docile loops that rarely break or close, to allow for gentle, but equally exciting surfing.

Certain spots are accessible from the sand or from the coral reef to make that quick step between the ridge that begins by measuring the strength and direction of the currents on the board, paddling with your arms until you reach where experienced surfers perform their acrobatics.

Australia, Hawaii, Maldives, among others, are part of a long list of places where today some form of this totally globalized and constantly evolving sport is practiced.

The world is conquered by surfing

Surf is a word of English origin and means "wave crest or swell." Surfing is a practice that was known in the West by Captain James Cook, who began to describe it after witnessing its performance in Tahiti in 1778 (Captain Cook died tragically during this trip), in a story that had to be finished by his officer James King, from that time there are also drawings. It is stated that surfing was already practiced in Polynesia 3,000 years ago, and in Peru, where there are engravings of surfers from past times.

A surfboard similar to the current one but made of wood was already used to perform these amazing stunts. The contemporary practice of surfing dates back to 1900 when it moved to California, another cardinal point in its dispersion. While it is a sport that requires the full strength of an athlete, there are elements of the art of dance and the skills of a gymnast brought together in its execution.

During 1956, the surfboards began to be manufactured in a light plastic and in the 80’s its practice became popular until it reached the boom that we know today, as well as its evolution towards other sports. Among these, a very important one was the addition of a fin to the surfboard, which brings more stability to the surfers.

Reflex and balance are essential for surfing; as well as having the skill and knowledge to foresee the direction of the swells and currents. It is essential to choose the right spot according to individual ability and level to really enjoy it. For beginners there are associations and coaches all over the Maldives and as part of the resorts.

In the Maldives, the surfing season runs from February to November, with a peak of big waves in June and August, when the wind blows offshore. A curious fact, the word “surfing” is also used to the action of scrolling through websites.

Surfing in the 21st century

Surfers make up a large community and some travel the world looking for the best waves Nowadays, this sport is practiced with increasingly sophisticated surfboards, suits made of intelligent materials to protect against the weather, bumps or injuries. Today surfboards are also made for pets and suitable for children's first experiences.

Surfing is practiced all over the world and there are daring variants, some outside the ocean, as there are those who have wanted to surf along the roof of moving trains.

Paddle surfing relies on the use of a paddle to reach the wave. In sky surfing, athletes launch themselves from an airplane on board, until they open the parachute to reach the sea; this is a high-risk sport.

Tander surfing is executed in pairs: one person holds the other while they carry out their increasingly daring evolutions on the board. This modality is already included in the championships, it is a spectacular sport, since it combines acrobatic gymnastics and even aspects of land skiing.

In the Maldives there is no need to suffer for the spots, since the sea prevails throughout the archipelago. For well-connected sites due to its proximity to the capital are: Coke surf break, Tulusdhoo Island, Huras Ninjas, Hudhuranfushi Surf Resort, Kanifinohu and Sultans are just some of the most renowned.

For those who do not want to dare to ride the waves, there are many other adventure sports such as scuba diving, water skiing and knee boarding, among others.