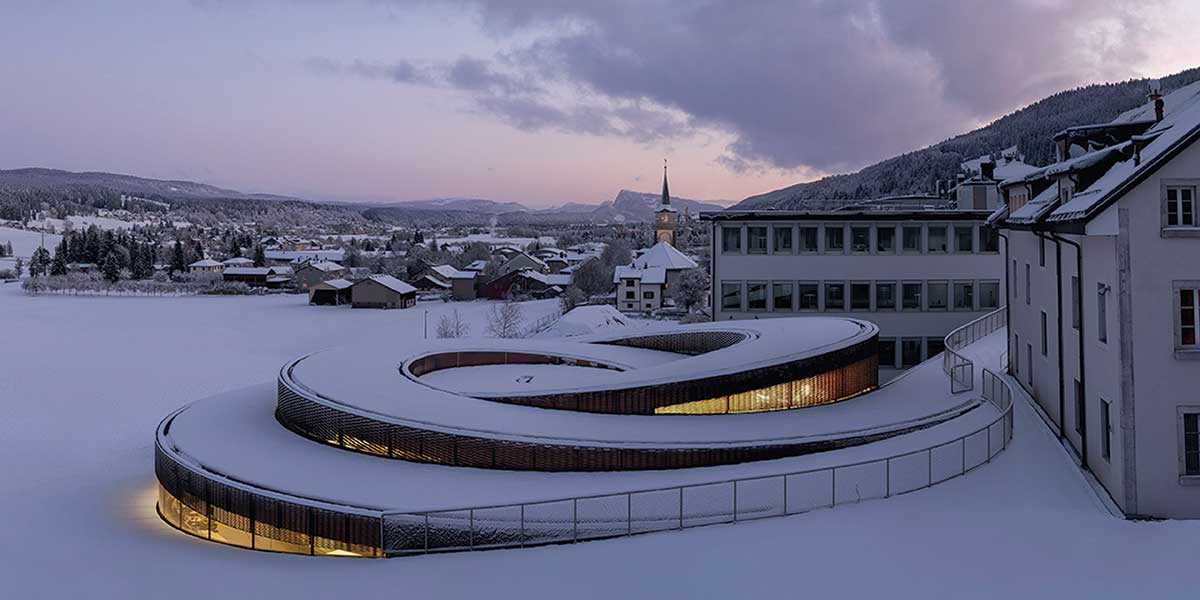 A selection of resorts and ski slopes for lovers of architecture, design, and winter sports. Which one will you visit first?

Les Arcs, with 264 miles of ski slopes facing Mont Blanc in France, celebrated 50 years since its opening in July 2019. It was designed by a collective of architects led by Charlotte Perriand who, at the age of 60, was at the peak of her professional career.

The resort is part of Paradisi, a ski area in the Tarentaise valley that offers uninterrupted hours of skiing. Les Arcs is made up of four villages: Arc 1600, Arc 1800, Arc 2000 and Arc 1950, the first two, designed by Perriand, are to this day a significant example of 20th century Alpine architecture. 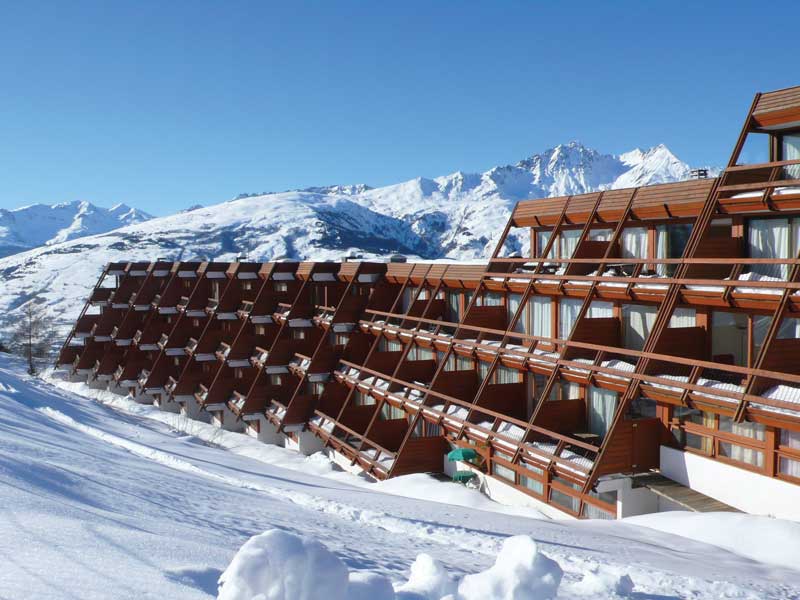 Les Arcs, creation of a collective directed by Charlotte Perriand.

Prior to the opening, the French government promoted the area as a post-war vacation destination. The resort was built on a completely new site, with elevators and buildings added as the development expanded. It opened in the winter for the 1968-1969 season, and over the next 20 years Perriand continued to oversee the design of the site.

Le Cascade is the most iconic construction, located in Arc 1600, it rises above a ski slope on one side. There are 140 apartments spread over seven inter-connected blocks. Le Versant Sud is the largest building of the entire complex and was completed in 1974 by Gaston Regaraiz and Rey-Mille, under the supervision of Perriand.

The largest building, Belles-Challes and Lauzièrez, consists of a pair of buildings with 590 suites spread over 17 floors, with 3,150 beds. This area of the Les Arcs opened in 1976 ant it was Perriand who designed the rooms. 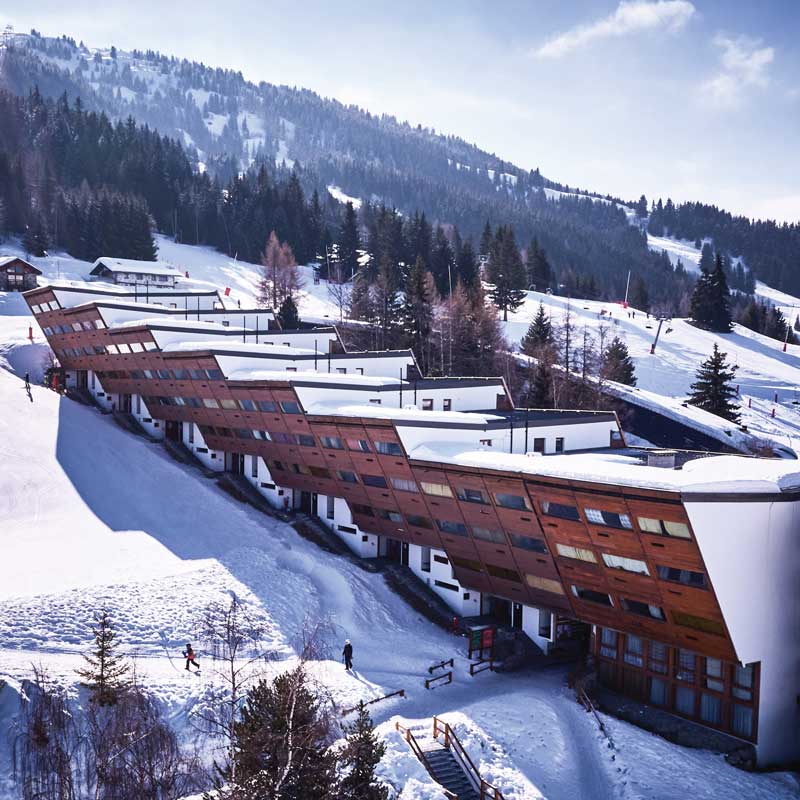 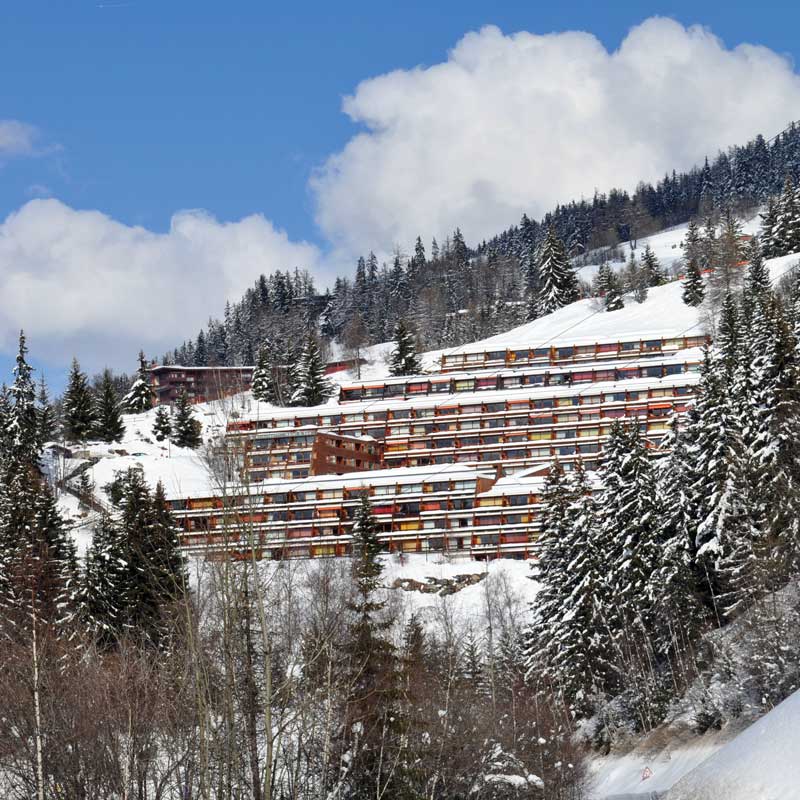 The majestic Mont Blanc is located near Les Arcs.

Chesa Futura is a bubble-shaped property in St. Moritz, Switzerland, that fuses state-of-the-art computer design tools with centuries-old construction techniques for minimal environmental impact. It was designed by Foster + Partners and uses one of the oldest and most sustainable materials: wood.

It is located on the edge of a slope facing Lake St. Moritz and is defined by Norman Foster as "a manifesto of architecture" that, although small, responds to its location and the weather patterns in the Engandin Valley. Chesa Futura opened in 2004.

In 2018, Bjarke Ingels Group (BIG) unveiled the project for this hotel located in the Vallée de Joux in Switzerland, where guests will be able to ski across its zigzagging roof.

The 75,350 sq. ft. luxury hotel will be located next to the other attraction completed in 2020 by the Norwegian firm: the Atelier Audemars Piguet Museum, a spiral-shaped building. "Watchmaking, like architecture, is the art of imbuing metals and minerals with energy, movement, intelligence and measurement," Bjarke Ingels said at that time.

Like the museum, the hotel will feature a roof that descends to the ground to integrate the architecture with the site’s topography. Both will provide visitor facilities next to the Audemars Piguet workshop, where the watchmaking company has remained since its founding in 1875.

Soon to be completed, the hotel will feature restaurants, bars, spa, and a conference center overlooking the slopes.

In October 2019, BIG also opened CopenHill, in Copenhagen, Denmark, the world's most expensive dry ski slope, which offers a 1,476 ft slope with a 180-degree turn halfway down and spectacular views of the surrounding landscape. All on top of the giant Amager Bakke waste-to-energy power plant. 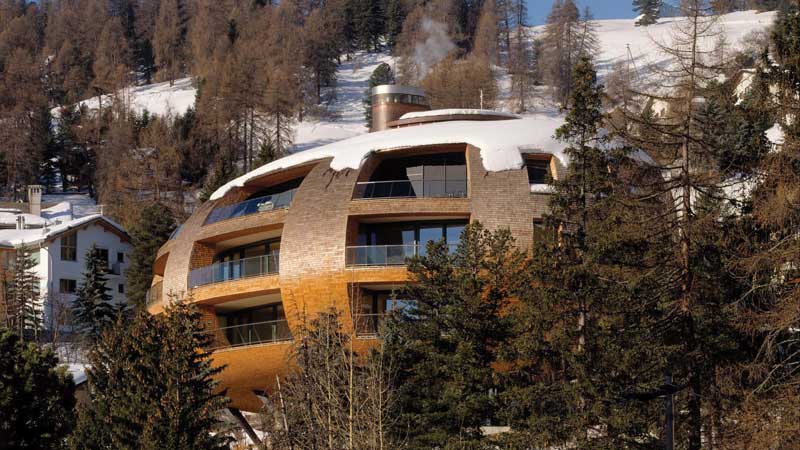 Wood is the main material of Chesa Futura.

Pierre Yovanovitch was the mastermind behind the interior design of Le Coucou hotel, a 55-room venue nestled among the snow-capped peaks of Meribel, a popular resort that is part of Les Trois Vellées in France, known as the world's largest ski area.

The designer, who has offices in Paris and New York, used pine wood from nearby forests for the lobby's paneling. The space is crowned by a vaulted ceiling displaying the work of the artist Matthieu Cosse.

Locally sourced wood was also included in the rooms, combined with terracotta-colored walls that are complemented by frosted glass light fixtures.

Should guests opt for a swim instead of the ski slopes, there's a heated outdoor pool offering views of snow-capped peaks, as well as spa and smoking lounge.

There are plenty of lounge areas, each with custom furnishings and features, plus a selection of more than 160 works of art personally curated by Yovanovitch. Also, a Beefbar restaurant serving exotic meats and the Bianca Neve restaurant offering Italian dishes. Le Coucou was opened in 2020, just after Les Acres' 50th anniversary. 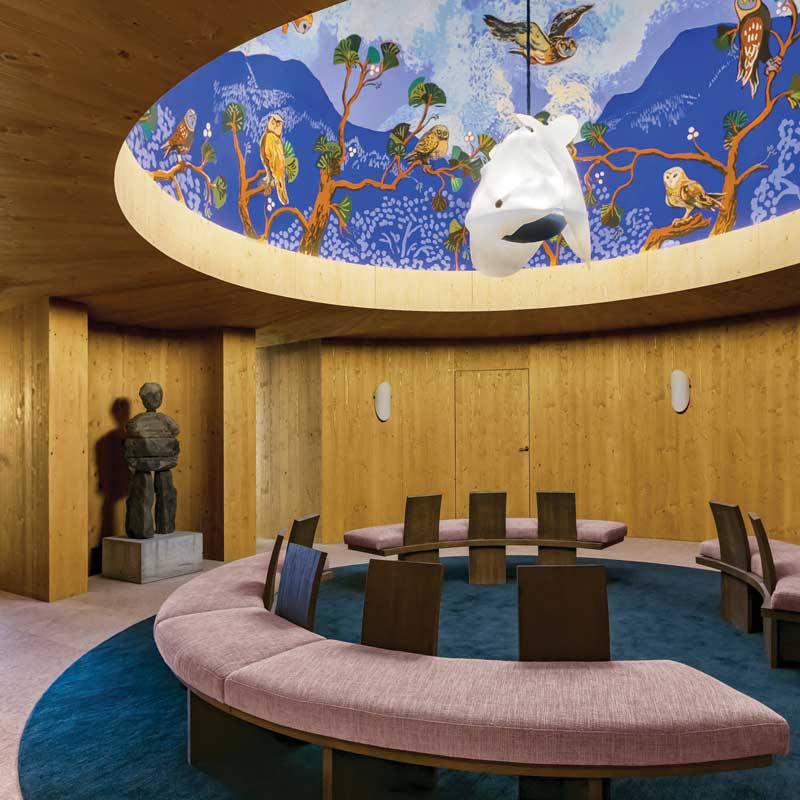 The vaulted ceiling in the lobby of Le Coucou hotel is the work of Matthieu Cosse. 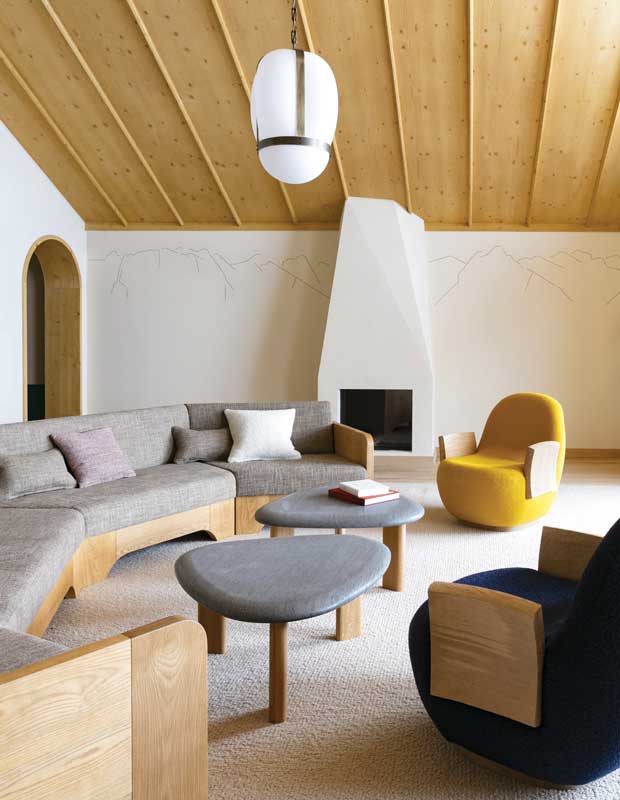 Ski jump over the Olympic city

Zaha Hadid, the first woman to win the Pritzker Architecture Prize in 2004, designed Ski jump, a sports center rising to a height of almost 164 ft, featuring a ski ramp, public spaces, a cafeteria at the top of the tower, and a viewing terrace, on the hill of Mount Bergisel in Innsbruck, Austria. Sky is defined by experts as one of the world’s most modern facilities for winter sports. Its distinctive structure – part tower, part bridge – and its silhouette stretches across the topography of the ski slopes into the Alpine sky.

Ski jumping is an Olympic discipline born in this place since the mid-nineteenth century. Opened in 2011 on Holmekollen Hill, this huge slide seems to be suspended and end in a cantilever over the Oslo fjords. To this day it is a highlight within the region, a favorite for those who like to enjoy a nightly light show and skiing. 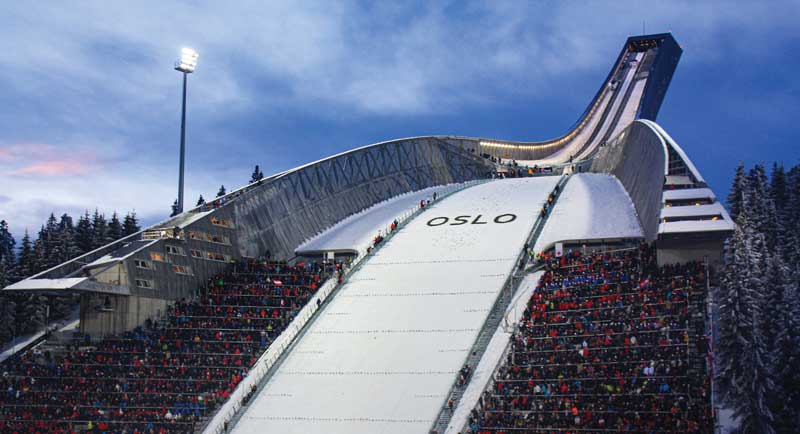