On July 12,2007, the Mexican yacht Ruahatú (“God of Wind” in Hawaiian) set sail from San Pedro, in the Gulf of California. So began it's participation in the Trans Pacific Yacht Race, one of the most important regattas in the world that brings together 80 yachts from 30 to 100 feet in length crewed by yachts men of different nationalities. 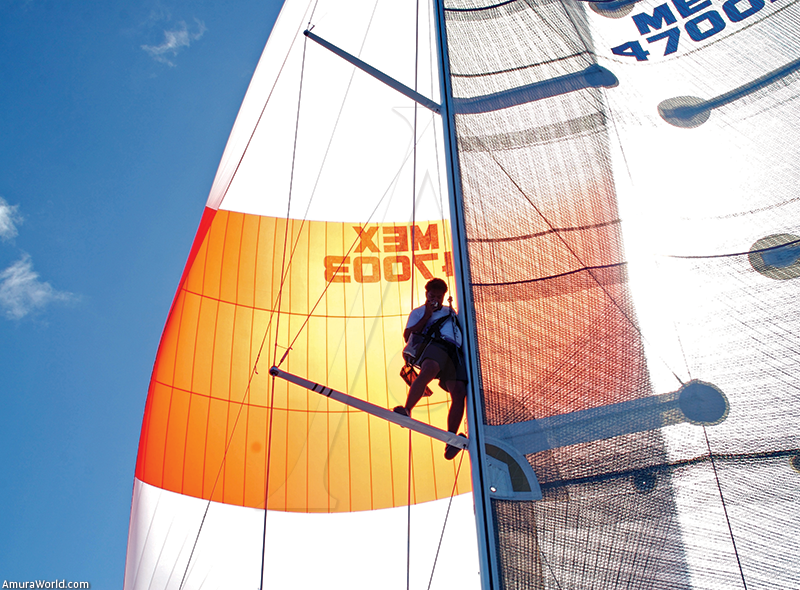 At 8 o’clock every morning, Raúl reported the yacht’s position to a communication vessel using the latest technological advances that provide yachts with optimum safety conditions when sailing. Under the burning sun, the crew changed the spinnakers up to four times a day to repair the wear and tear to the halyards and wrapping them with resistant Teflon tape.

After almost two weeks at high sea, during which time they also had to overcome the breakage of the rudder controls and two sails, which became unusable, finally they sighted land of the Island of Molokai, located 2S miles (40 km) east to Oahu and from where the night lights of Honolulu could be seen.

At 2 o’clock in the morning of Tuesday, July 24, after sailing 2,532 nautical miles (almost 5,000 km) in 11 days, 16 hours. 5 minutes and 33 seconds, the Ruahatú arrived at the much awaited finish line. The yacht finished in 16th place out of 78; it was the first of the international fleet and fourth of the so called Division IV.

Raúl Velarde is a businessman who has been participating in regattas as an amateur for 30 years. After showing us an exciting video of the overview of the regatta, he told us of experience with his usual freshness and enthusiasm. 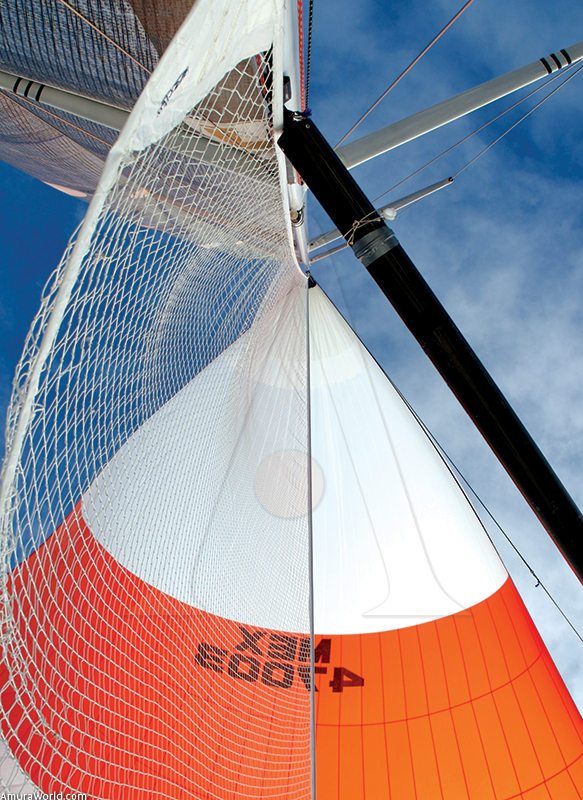 “It is a very satisfying regatta because of the challenges the crews have to overcome. It is continuous enjoyment Suddenly, we can be 1,250 miles (2,000 km) from land in any direction, alone, isolated, but at the same time in contact with many the other yachts competing with us."

On this occasion, the wind conditions were peculiar. The North Pacific High, which normally dominates the sea between Los Angeles and Hawaii at this time of year, was not strong enough to generate reliable winds. In this scenario, during the voyage. Raúl decided to implement a specific strategy.

“We chose a slightly longer route instead of a direct but uncertain route because of the wind speed. We took a more conservative route by heading south, trusting that we would have a constant wind throughout the route. And so we did, we had winds of between 12 and 20 knots all the time. The traditional high pressure that would allow a fast passage to Hawaii did not favor us this year, so we opted to head towards the trade winds, which are more reliable. In this way. we came close to the Cosme tropical storm which was heading for Hawaii that due to its position generated increased winds that we could take advantage of.”

This is not a regatta in which currents play an important role unlike the Newport-Bermuda. in which yachts have to cross the Gulf Stream, which makes the strategy required to cross it critical. 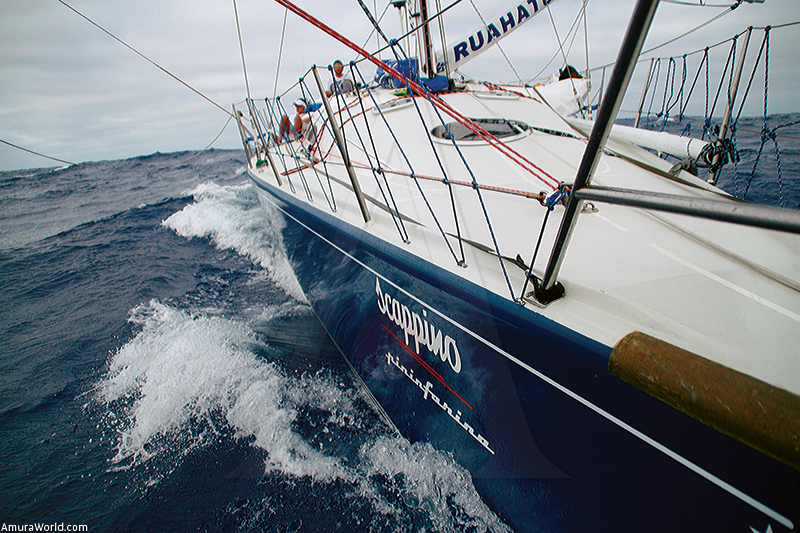 The Mexicans faced the great offshore yachtsman of the world. Crews formed of great professionals in the world of high competition. The Ruahatu is a racing cruiser, so she is fast and has certain amenities such as a bathroom dining room, a galley, bedrooms and a navigation station. She is so versatile that she can be used for family outings as well as participating in regattas as famous as this one.

Ratil told us about some of the technological advantages that were not available several years ago: “When there were no satellite telephones we used to use. and continue to use lateral wave radios, which help us to download meteorological charts. On the other hand, we use Internet all the time during navigation to make adjustments to headings during the route. We log on 4 times a day every six hours using Iridium We download grib files that contain forecast models from which we select the ones which adapt most to the conditions of the regatta. In general, we use the Global Forecasting System (GFS). although it is not very good for modeling the behavior of tropical storms and cyclones. Like in this regatta, two cyclones were forming, we used the U.S. Navy (NOGAPS) forecasting model in parallel in order to perform our analysis using the specialized software that we took in order to make the right decisions along the route. Every day. we reported our position to the communications vessel, which was one of the most exciting moments of the day. At 9 o’clock in the morning, the communications vessel informed the position of each yacht and how far they had to go to the finishing line. Although we couldn’t see any other yachts for most of the voyage, just knowing the position of the other competitors made us feel accompanied’*. 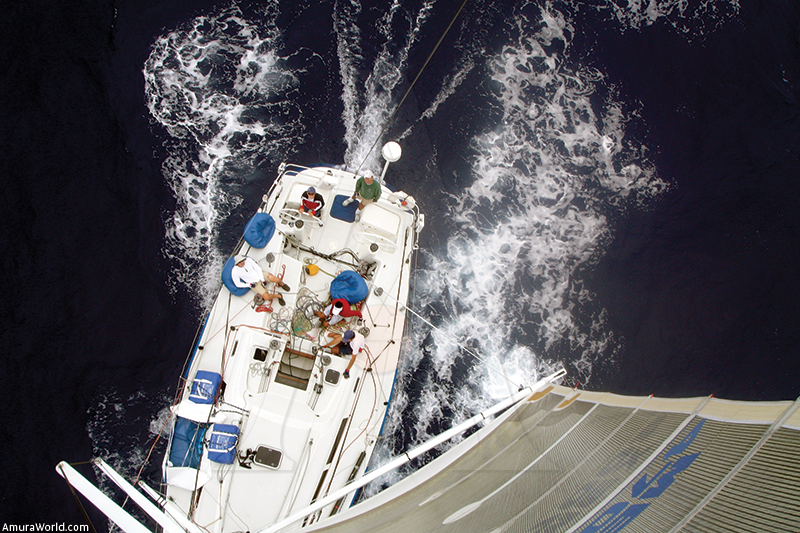 The main challenge for the crew was keeping the yacht operational "The regatta is very long. We sailed for almost 5000 km with constant winds and sudden varia- tions generated by the squalls that followed us. These conditions cause a lot of wear and tear to parts of the equipment. We had problems with the halyards, which are ropes used to put up the sails. They constantly deteriorate. We adjusted them every hour to change the points of friction. Every six hours, we had to take them down to repair and protect them. Luis became an expert in doing it If we had been left without halyards, we would have risked finishing the regatta “limping”. In this regatta, we also lost several hours when we nosedived on losing control of the rudder, but thanks to skipper Ricardo’s skills; we were able to perform the necessary repairs”.

Velarde explained the characteristics of the regatta to us: “In reality, the TRANSPAC is not very dangerous regatta. It is not like those when yachts sail around the world navigating the Southern Ocean, where yachtsmen have to be careful to avoid icebergs. There are no cargo ships or excessive commercial traffic so collisions with other yachts are very unlikely. Also the warm climate during most of the regatta is delicious. What does happen is that at times we have to “ride” the squalls. At latitudes close to the Equator, there is an area where the sea is almost boi- ling and the water is very hot Cumulus clouds are created that grow during the day. When it rains in the afternoon, the wind comes with full force at night We have to position the yacht in front but without letting the cloud pass above. It is important to judge it right, leaving it to pass by one side but without going into a vertical whip that creates winds that can break the sails or even the mast It is also a regatta with great challenges for helmsmen You must remember that hear it is not like the Mexican Pacific when at night of the sea is like a millpond and you can see the stars and the moon with generally soft winds. In the TRANSPAC. we follow the bad weather. The nights are cloudy, we cannot see the stars, there is almost no visibility. we lose the reference on the horizon and as the waves come from all angles, keeping the yacht in position is a real challenge. Luckily, we had excellent helmsmen such as Ricky and Héctor”. 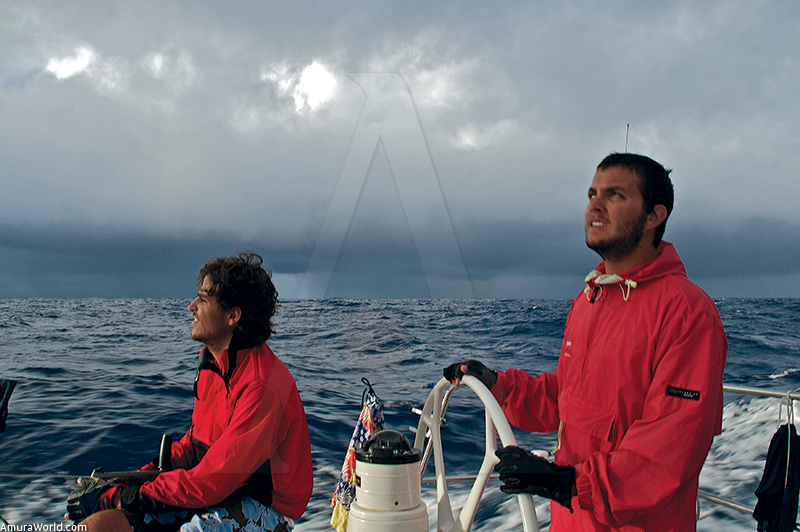 As in any experience of this type, the crew members are well trained after having taken safety courses on the open sea and they bring all the equipment necessary, such as life jackets and radios: “The only danger is somebody falling overboard. Pulling them back on board would be really difficult because we can barely distinguish bet- ween the horizon and the sky. lb prevent accidents, everybody has to be very disciplined on board. Steve was very meticulous about this issue. During the day. we didn’t wear our harnesses because falling is less likely, but at night, we all wore them because they have a special support rope that allows us to move around the yacht while eliminating the risk of going overboard. The regatta also gets complicated because of the accumulated tired- ness of the crew members. It’s like spending 11 hours a day riding a galloping elephant. Fortunately, the enthusiasm and the skill of the younger crew members such as Eric. Diego and Jerónimo kept our energy levels very high”.

Arriving at the finish line in Waikiki was very exciting: “We wanted to arrive, the same time we didn’t want the regatta to finish. Sailing is very satisfying and enjoyable because with the experience that we have and the team that we took, we really enjoyed spending many days on the open sea", recalls Raúl.

Although Raúl and his companions are very aware of the difficulty of obtaining sponsorship and that the level of promotion of regattas is low. they have proposed to embark on a new adventure on November 2 at the Long Beach to Los Cabos regatta, which covers 800 nautical miles, in which practically the same crew members will participate. 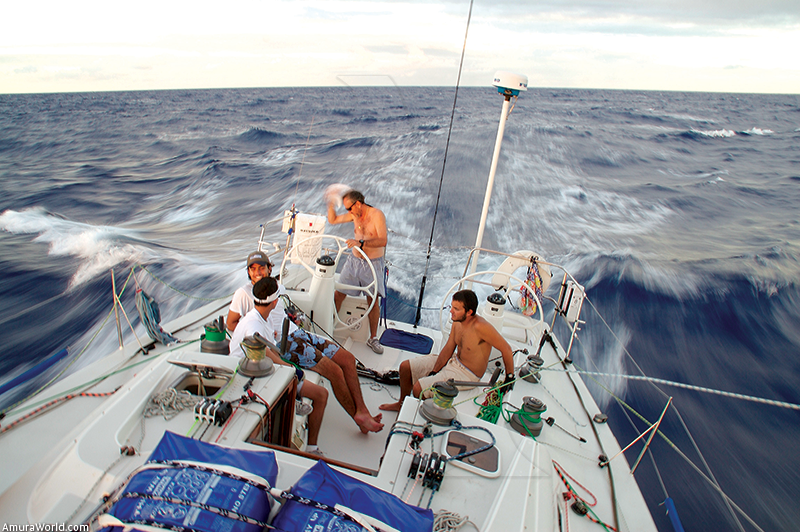