New yacht inspired by the last work of Steve Jobs 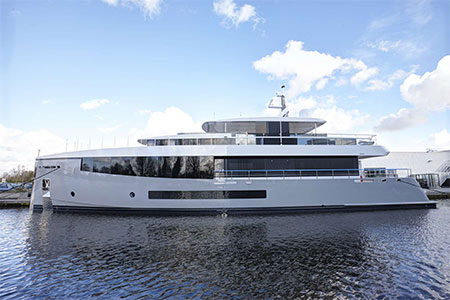 One of the latest creations of Steve Jobs before his death in 2011, was precisely the vanguard vessel that he devoted himself personally since 2009, together with Feadship.

The ship named Venus, built in the Dutch shipyard Koninklijke De Vries (Netherlands ), had to stop its progress due to medical complications that forced the founder of Apple to abandon the project. However, the boat was completed in 2012, under the supervision of a team that turned the latter dream of Jobs.

Well, it appears that following the success of Venus, Feadship has built a yacht (by request of a client), which seems to be entirely inspired by this work. The new ship, which has so far only been called Hull 692, has been compared to Venus because of the similarity of its futuristic and fully glazed appearance.

A major difference is the size, as the Hull 692 has a length of 34 m, while Venus is a giant of over 80 m. For now they are being manufactured three models of this new boat that could be compared with a younger sister of Steve Jobs superyacht , and apparently the same already have different owners .

It is interesting to imagine the differences between the solutions designed by Jobs, the result of his work and the differences with this new boat that indirectly pays tribute to one of the most innovative and entrepreneurial minds of the contemporary world.