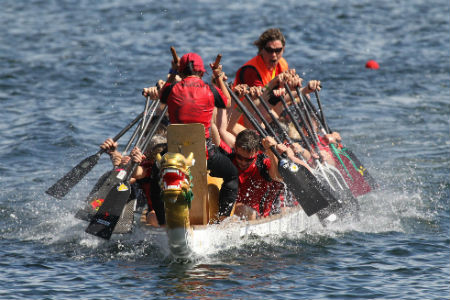 A six day event on board of Dragon boats start today, where men and woman from the globe compete at this high performance championshimps. From Mach 23 to March 28, the Australian Dragon Boat championships joins the Asian championships (March 29-March 31), which are the prevent events to the world championships in West Lakes, capital of South Australia of Adelaide.

John Holland, president of Dragon Boat South Australia, noted that as far we know, no one has ventured to make three such events one after another, so the challenge is even more exciting. “We will have club against club, country against country, in the 200m, 500m, and 2000m events, some of which will be happening simultaneously”, he pointed.

The dragon boats are intimately rooted in Chinese culture. The new vessels are more efficient because materials like fiberglass, but retain the Asian tradition and original design features.

More than 6,000 paddlers will compete over the three championships, with open´s men, women and mixed classes of races in each category. Visitors can enjoy everything offered by the destination: beaches, restaurants, wine regions like McLaren Vale and Barossa Valley, museums and galleries, as well as the Chinatown of the city.