Valle de Bravo, with its white stucco colonial houses, wrought iron balconies, and red tile roofs, is a very special place. It is a village set in a mountain that rises from the shores of a lake, surrounded by thick pine forest.

It takes 60 minutes to get to Valle by car from Toluca and two hours from Mexico City. Its varied attractions and interesting nearby sights have turned it into a top vacation destination.

When you get to Toluca, take the road to Temascaltepec (the turnoff is at Km. 40), and then the road to Valle de Bravo, passing by the Nevado de Toluca and Los Saucos. This is the most recommended route of the three that go to Valle. 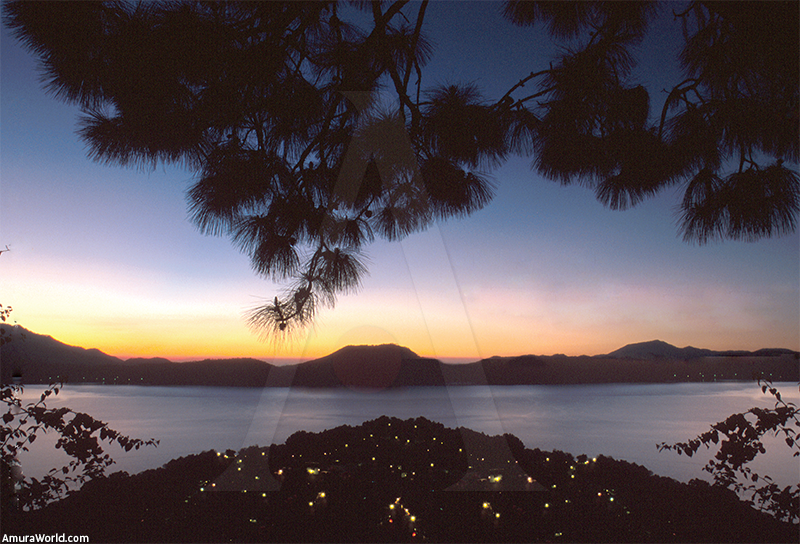 Its original name was San Francisco del Valle de Tamascaltepec and, for more than three centuries. the main occupations of the villagers were agriculture and horticulture. However, around 1946, both the landscape and the life of the town were transformed when the land in the valley was flooded as part of the Miguel Alemán hydro-electrical project.

Today in Valle de Bravo you can practice water sports that are typical of most lakes, including water skiing, sailing, canoeing, rowing, jet skiing, and sport fishing. There is a full range of facilities and several sailing and speed boat regattas. Boats with outboard motors and collectives also sail peacefully around the lake. 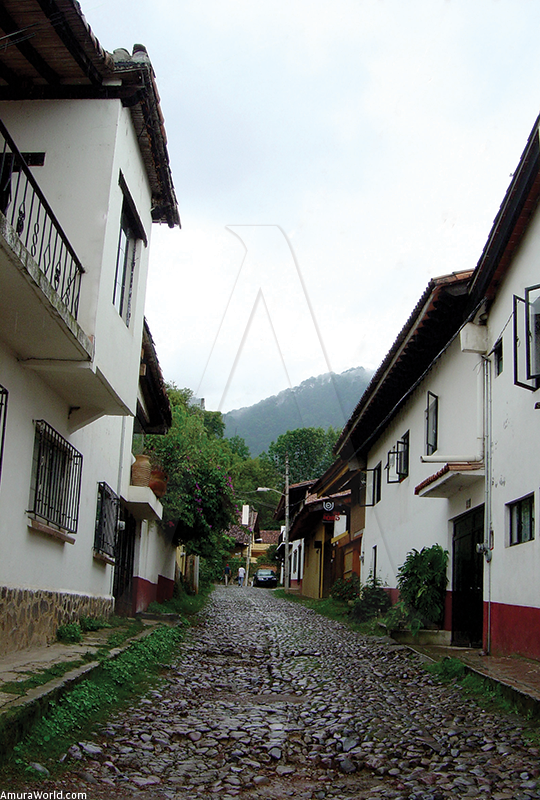 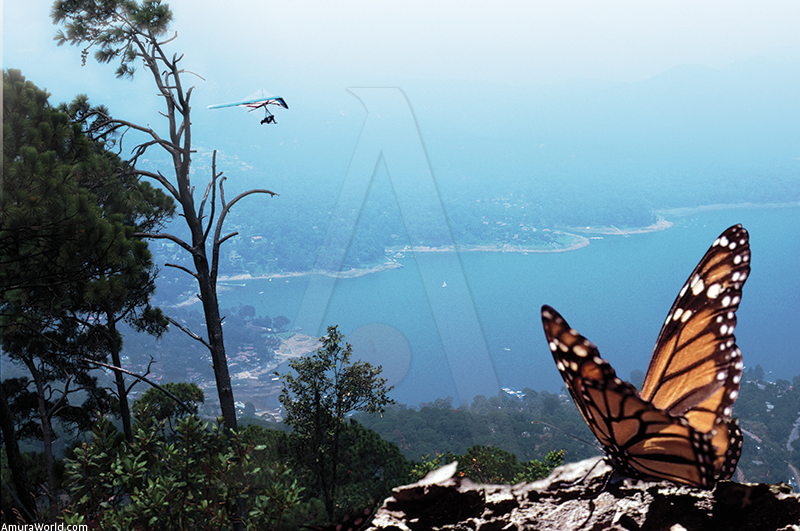 The town has an endless number of attractions: the steep streets, the arcades around the plaza lined with snack stands, the unique wood and tile bandstand, the handicrafts market and the parish of San Francisco, the town’s patron saint, with a bell tower dating from the 16th century.

Neighboring Avándaro, which is now part of Valle, has residential developments and a Grand Tourism hotel, restaurants and riding and golf clubs. In the surroundings there is mountain and rock climbing, biking, cross country motorcycle riding, free flying, flying ultra-lights, as well as other activities.

At the beginning of September 1971, Avándaro had its claim to fame when it set the stage for a kind of Mexican “Woodstock”… but over 31 years have gone by since then and almost no one remembers it. Today Valle has a well polished and deserved image as a choice place of refuge for long-suffering residents of the capital and groups of Europeans, especially French and Germans, who like its peace and quiet.

Valle de Bravo is located on the Balsas River basin, and is made up of 5,458 reservoirs, including Colorines, Tiloxtoc and Valle de Bravo. The most recent statistical information (1989) reports a hydraulic infrastructure that consists of 58 springs, three rivers, 21 streams, four dams, three rustic dams, seven aqueducts and three deep wells. 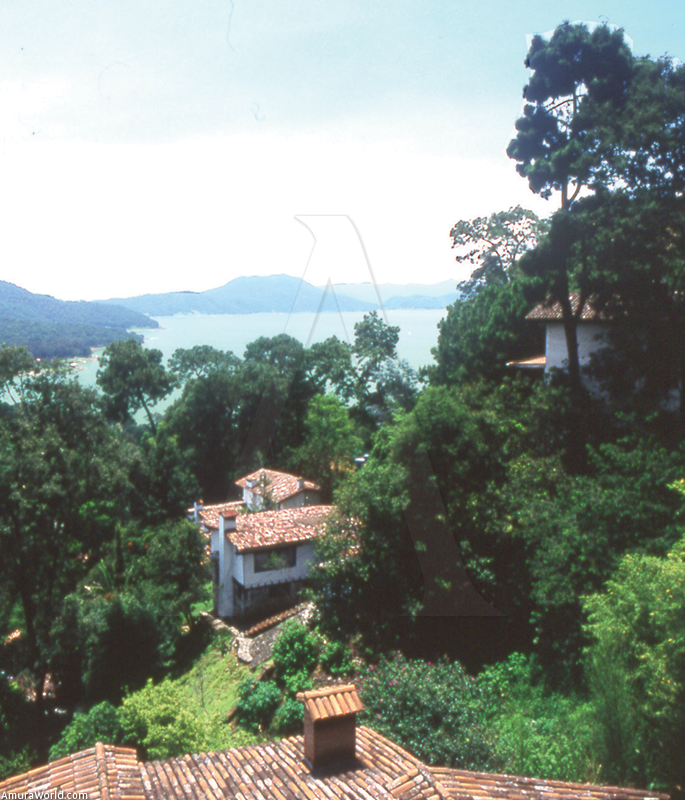 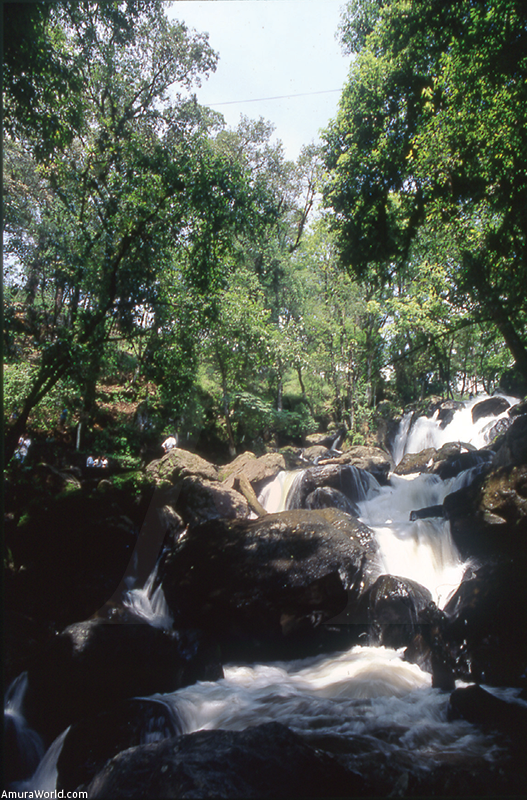 A Place for Relaxing

Valle de Bravo and Avándaro are not just for vacationing at specific times of the year. They have been chosen by members of the upper-middle and upper classes (Mexican and foreign) as the site for their weekend homes. Amidst heavenly landscapes, a wide range of homes and building lots are available, and there are endless recreational opportunities.

In Valle de Bravo there are developments like El Santuario, Izar, Llano Largo and Rancho Avándaro, where the price of a square meter of land is about 350 US dollars.

There are, of course, areas—not exactly on the lake—that are less expensive, ranging from 80 to 200 US dollars per square meter.

This nautical-residential development, a place for socializing that is in perfect harmony with nature, was the brainchild of Michel Domit. Here, in an oasis for body and soul, members can enjoy this traditional corner of Mexico, with its customs and fiestas.

El Santuario is located on the northwest bank of the Valle de Bravo dam, next to the San Gaspar residential development, on the lake. It is only seven kilometers (4.3 miles) to town—just minutes away by car or boat—which means that residents can go there any time of the day or night. Domit’s vision inspired him to build a horseback riding and nautical complex in a mountain where you still find quartz stone, exuberant vegetation and a variety of animals, including roadrunners. 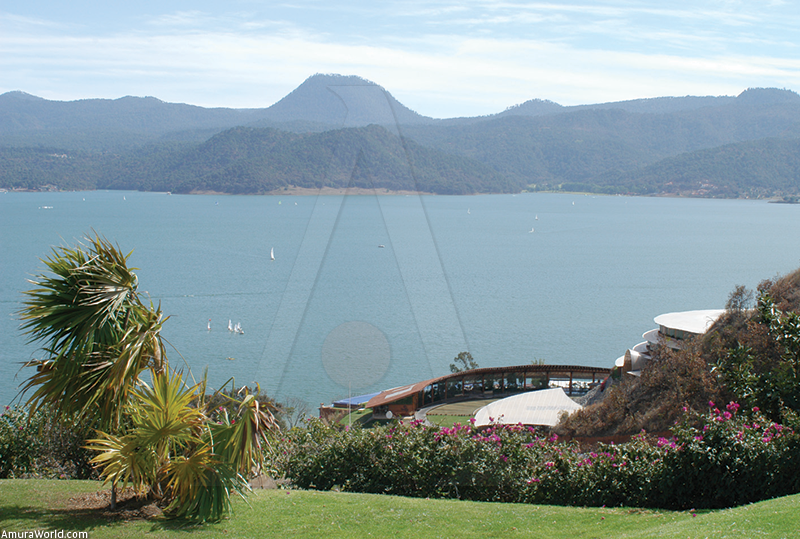 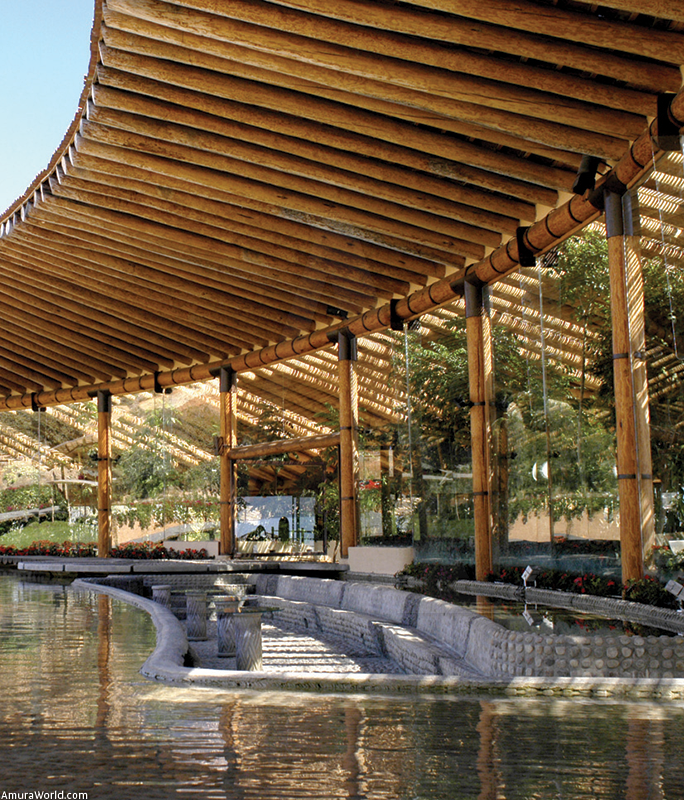 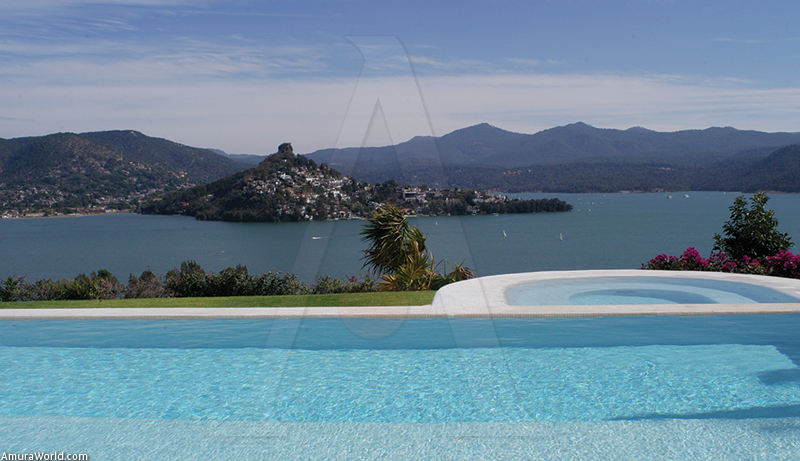 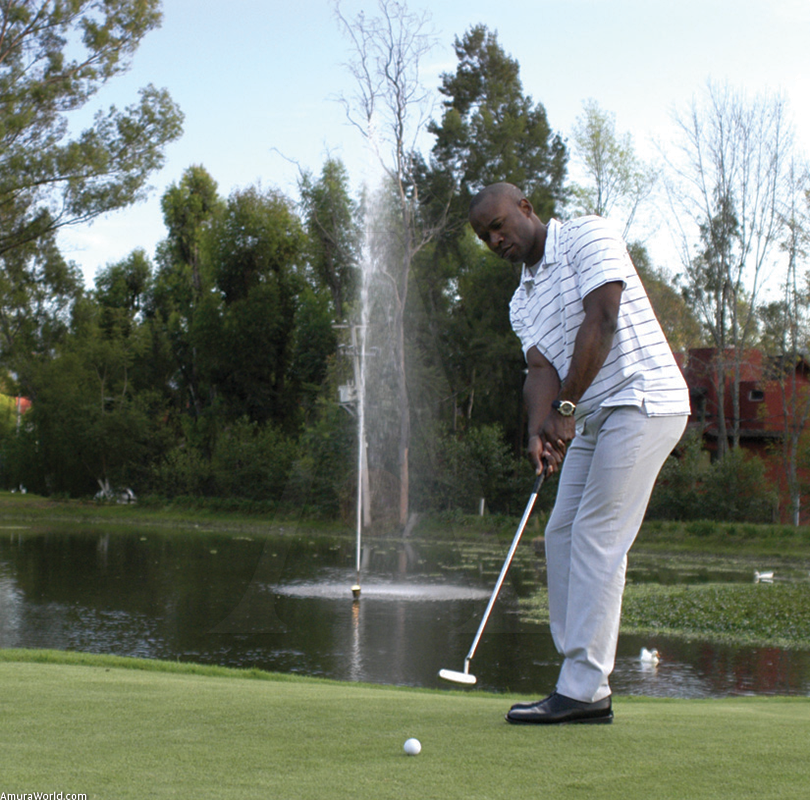 The El Santuario architectural project has been growing since 1994, preserving its mountain setting and adapting to the idea of offering a space that provides a balance between buildings and nature, and that will contribute to preserve the forest environment that still exists in Valle de Bravo.

The two clubs, riding and nautical, have infrastructure that is designed specially for the appreciation of the surrounding landscapes. They feature a variety of services, including swimming pools in various shapes and sizes, Jacuzzis, reflective pools with chaises for sunbathing, restaurants, areas for adults, adolescents and children, stables and day care. It is a concept that is unique in Latin America.

The Nautical Club now has a dock for five boats and five sailboats (future growth, in blocks of 10, will depend on demand). Additionally there are pneumatic boat elevators, a patio with a ramp for maneuvering, outside parking for boats and a lakeside promenade that extends along the Clubhouse (120 m/393 ft). Michel Domit began building this enormous complex, with the support of the government of the State of Mexico, in an area where property values increase for investors who are interested both in the concept and in the tourism development of Valle de Bravo.

Another top club in the region is Club Náutico Valle de Bravo, that covers 17,000 m2 (4.2 acres) and features a clubhouse and gardens, a multipurpose area, swimming pool, bar, restaurant on the terrace overlooking the lake, tennis courts and shops carrying nautical items.

The Club has 56 lockers for members, five platforms for different types of boats and a powerful tractor for hauling them. For access to the lake, there are two ramps and three piers for boats up to 6 meters (19.6 feet) in length and 2.5 meters (8 feet) wide. 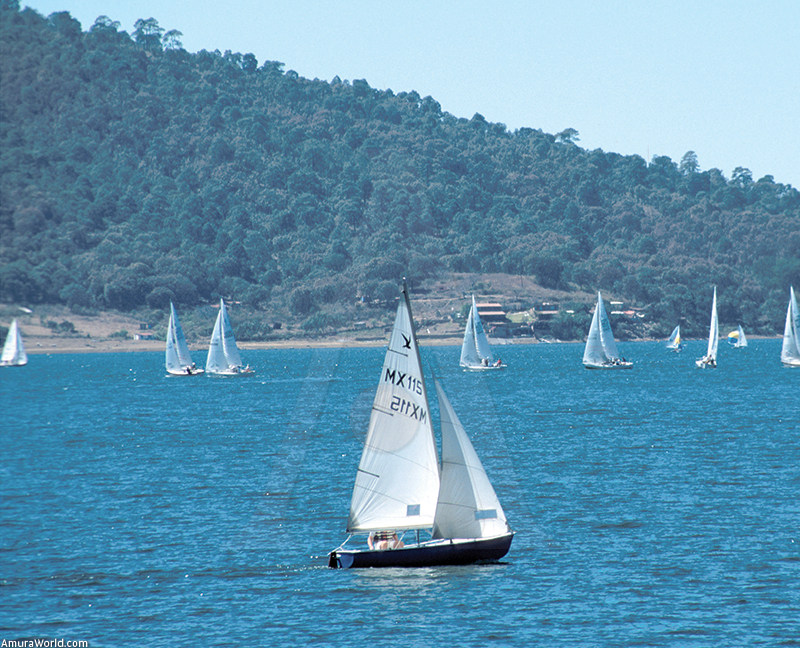 On August 16, 1956 a group of water sports enthusiasts, who had been sailing in the area for some time, got together to discuss the possibility of founding a sailing club located on the Valle de Bravo lake. After studying the legal matters pertaining to the formation of a club, they came up with what today is Club Náutico Avándaro. This is the first on the lake and the second in Mexico (the first in the country was the Acapulco Yacht Club, which had been founded the previous year).

They decided to buy a lot on the other side of the lake (visible from the municipal pier), since that is where the wind starts up earlier and blows best. On the land was a house that had been used by the engineers who built the dam and that today is part of the Clubhouse. 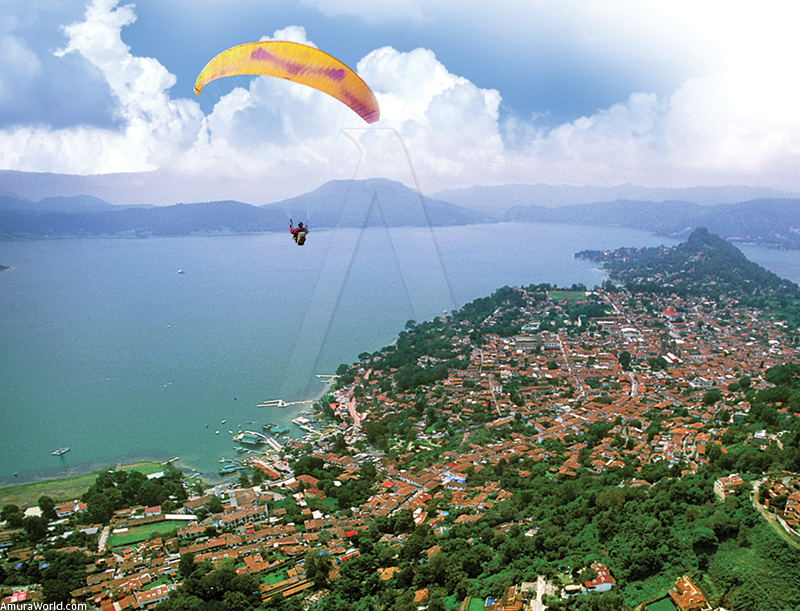 The club grew rapidly and shaped many worldclass sailors like Eric Mergenthaler and Tania Elías Calles. Today it covers 15,000 m2 (3.7 acres) and has 123 active members. It has two protected docks (78 and 66 m/ 256 and 217 feet) that adjust to the water level.

Access to this 550 hectare (1,359 acre) development, which extends from Velo de Novia to the shores of Valle de Bravo lake, is through Avándaro. Among its attractions are an 18-hole golf course, sailing and riding clubs and residential lots.

In accordance with data provided by the local tourism office, there are 104 tourist attractions, among which are Valle de Bravo Dam (because of its water sports potential), the lake, Laguna Negra, the Municipal Pier, Velo de Novia waterfall (and three others that are identified as natural hydraulic resources), Cruz de Misión lookout point, La Peña, Torre Monte Alto, Avándaro, El Molino, and El Salto de Ferrerías. 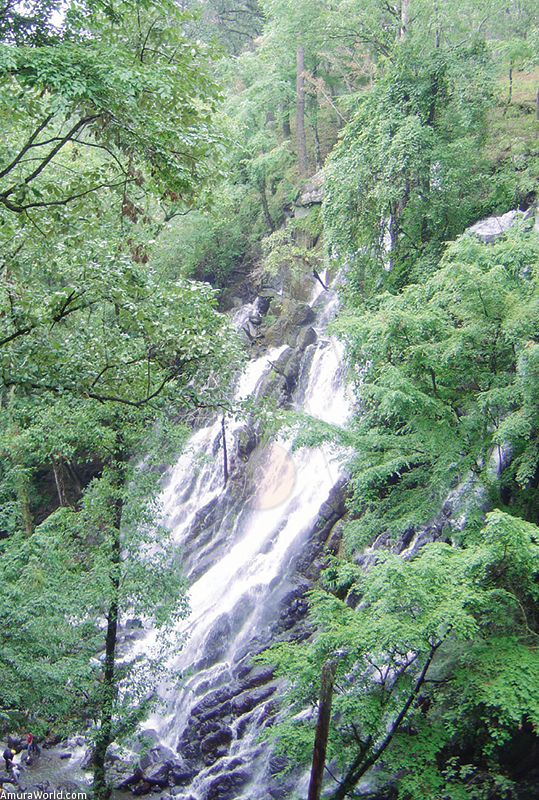 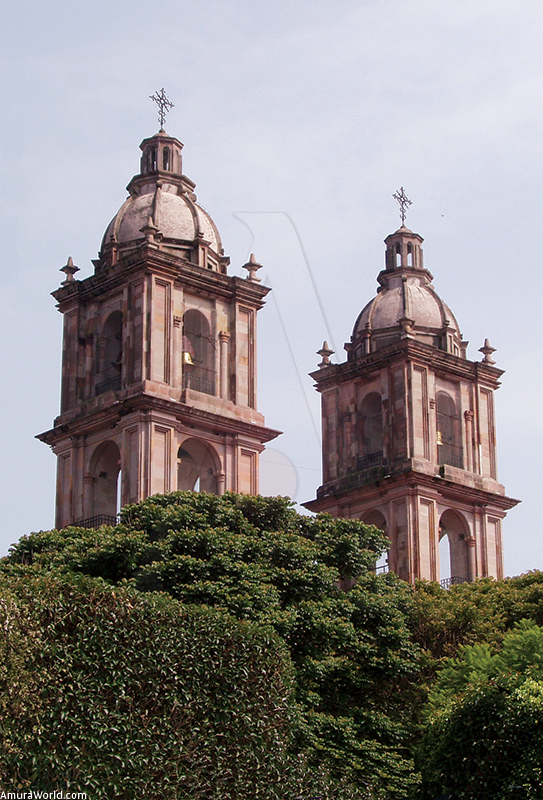 According to data provided by the State Tourism Office, 2,870,000 tourists (2,792,000 Mexicans and 78,000 foreigners) visit Valle annually. Additionally, 2,000 vehicles arrive there every weekend, mostly belonging to what is known as “eight-hour tourists” who only come to spend the day.

There are 22 hotels, three family-run inns and three camp sites, 20 restaurants, about the same number of smaller eateries, as well as several bars and nightspots.

It takes about 20 minutes to climb to the top of La Peña, a solid rock that is home to an unexplored archaeological zone. A natural lookout, it affords a splendid, wraparound view of the lake and the town.

The high forests that surround Valle de Bravo lake, especially those that rise above Avándaro, are used by paragliding and ultra-light aficionados. The weather conditions are good for gliding and enjoying, from these heights, one of the country’s most beautiful landscapes.

For those who seek the greater adventure of climbing enormous vertical rock walls, there is Peñón del Diablo, a craggy cliff over 600 m (1,969 ft) tall, that is part of the mountain range that divides Valle de Bravo. 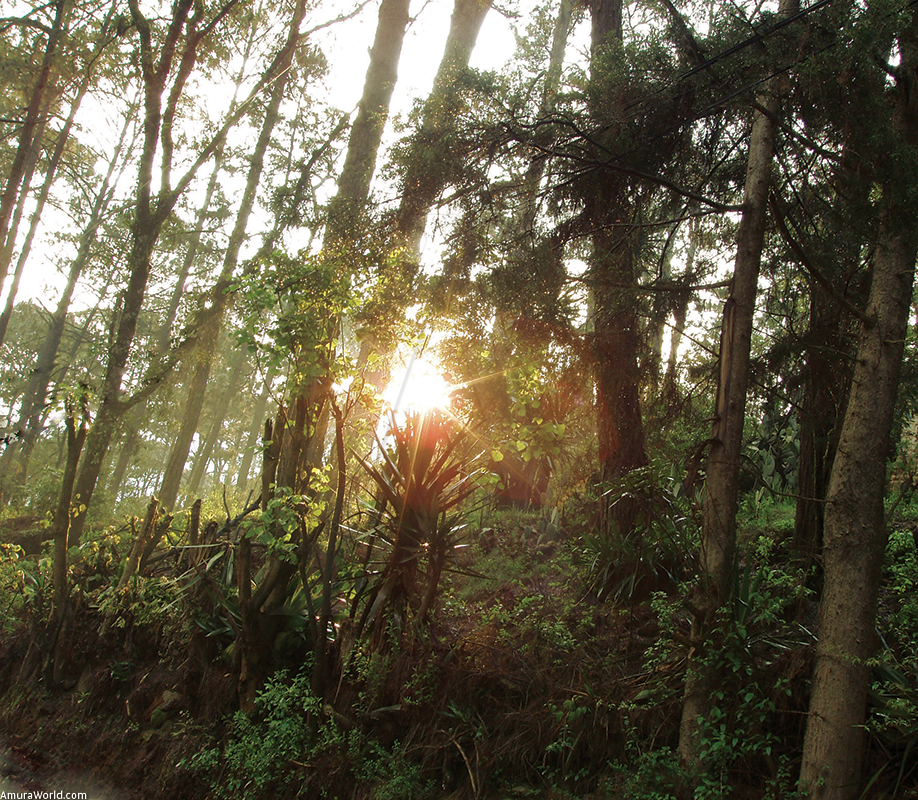 Located on a narrow spot on the Valle de Bravo Dam, with a view of La Peña and San Gaspar (where Michel Domit built El Santuario), getting to the club is a true adventure. Not only do you have to traverse a long, winding road (flanked by the thick forest and huge drops), you have to pass the tight surveillance that prohibits access to anyone who has not been invited by one of the residents.

The road passes over the top of a mountain that features a marvelous view of the lake and the Clubhouse. Some of the golf club fairways extend through a wooded area on the shore of Lake Valle de Bravo.

Utilizing a type of construction that is typical of the region (steep roofs covered in ceramic tiles), combined with architectural details in the style of Luis Barragán (open spaces, rooms two-stories high, reflective pools and bright colors) is the Clubhouse, set amidst the trees.