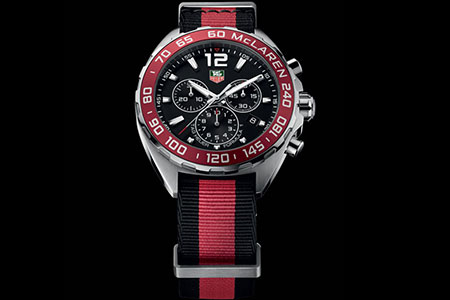 Celebrating the relationship of more than three decades of successes with McLaren, TAG Heuer launches a special edition of one of its emblematic models: the Formula 1. This commemorative edition of the famous clock is provided with an aesthetic marked by red famous hues "Rocket Red ", from the 1985 campaign of McLaren.

The new TAG Heuer Formula 1 McLaren Special Edition has three indicators (1/10 second and hour; minutes and seconds) when placed 6, 9 and 3 hour of disc, contrasting with the black opaline it.

On the back of the watch, an engraving profile of MP4 1985 pays tribute to the association of McLaren and TAG Heuer, plus the legend "30 years of partnership anniversary".