Ecstasy and love torment in a gold ring 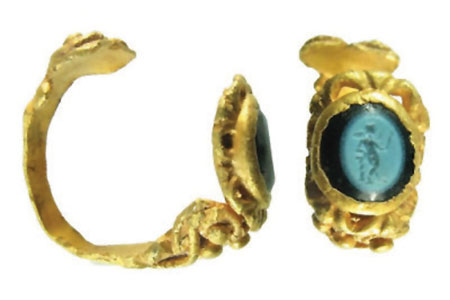 This 2015 an ancient ring has been found in England -belonging to the IV DC-, which was found by a metal detector in the field of Tangley. The piece reveals a blue image that looks like a mirage, the image portrays Cupid burning the wings of a butterfly representing Psique.

It all point out that this solid gold ring belong to a wealthy person that was based in an ancient Roman province of Britannia.  The center of the ring has a unique onice, in its eye you may behold the image of Cupid in a confident position tormenting a butterfly with a torch.

Psique in the way of a butterfly represents the human soul, it comes from the Greek and the myth, Cupid (Erios) captures Psique and both fall in love to get married after several harsh tests, they also have a  daughter. This scene evokes pleasure and ecstasy, at the same time it also portrays the torment to which the human soul is submitted to.