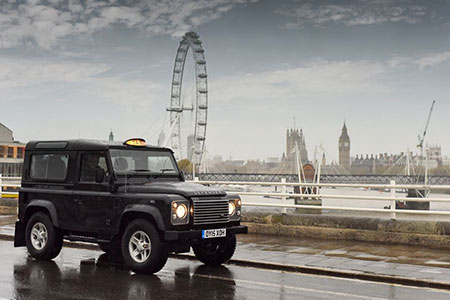 As a premise of a benefit auction of the Defender number 2 Million which will be held at the Bonhams hall on December the 16th, a Land Rover Defender “cab” has been seen around the streets of London town; it forms part of a commemorative video to celebrate the 67th birthday of this iconic 4x4:

The benefit auction will give collectionists and automotive enthusiasts the opportunity to posses a  Defender number 2 Million, an emblematic piece of Land Rover’s history, that will be the protagonist of an exhibit open to the public where it will be shown along a series of Land Rovers and Defenders, the auction house Bonhams of London will host this event during the 15th and 16th of December.

This video also counts with the appearance of other modified vehicles that have been changed especially for its realization, including an ice-cream truck of the II Series Land Rover, an adapted Paul Smith Defender,and the first vehicle to be exhibited in the Land Rover Series that was introduced in the Automobile Salon of Amsterdam in 1948.

All the money collected at the Defender 2 Million auction will be sent to the International Red Cross Society and the Half Red Moon (IFRC), as well as the Born Free Foundation in its totality.