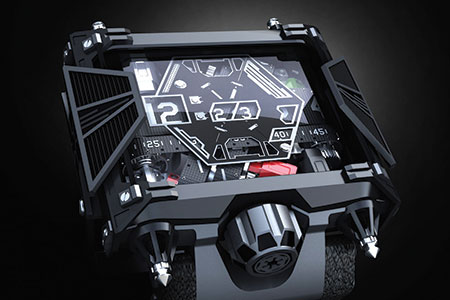 Devon Company has created a watch inspired in Darth Vader’s helmet for it’s latest collection, this piece will be a limited edition of 50 pieces known as “Star Wars: The Force Awakens”, in referral to the last release of the saga.

One of the pieces will be donated by Devon and Bloomingdale's for auction in support of the Child Mind Institute through the CharityBuzz website. However, this watch will not be the only piece that will be able to be admired at Bloomingdale's with the Star Wars theme, it’s windows have also been invaded by The Force in a unique exhibition of objects used during it’s the movie’s shooting, as well as several garments and accessories by exclusive brands designed specially for this occasion; they will also be auctioned for the cause.

In the case of the Devon watch, it will be valued in 28,500 USD; it has a nylon strap that is reinforced with carbon fiber and a design that emulated the helmet of  Darth Vader with independent cells, four engines and over 300 electric contacts. The remaining twelve pieces at the auction unite the collaborations of  Diane von Furstenberg and other international firms.