225 years of history at the Girard Perregaux new collection 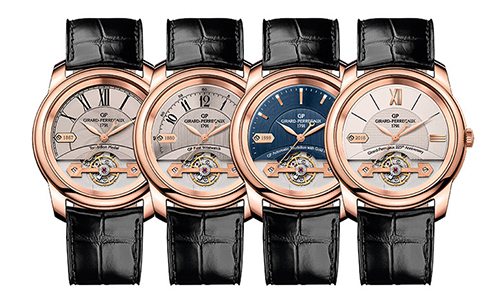 Girard- Perregaux: Place Girardet is the collection that commemorates the 225th anniversary of the Swiss watchmaker firm, which since 1791 has been highlighted as one of the best Haute Horlogerie houses of the world.

The entire collection reveals a gold plaque engraved with a year and an appointment at the center of the sphere which commemorates a remarkable event in the history of the company, starting with its foundation and culminating with this 225th anniversary, as well as several important and universal dates as 1808, the year of the Beethoven Symphony No. 5 or 1963 in reference to the first woman space trip. The history of Mexico is also honored with dates such as the Battle of Puebla, Independence or the Mexican Revolution, among others.

With a 41 mm pink gold case and a thickness slightly less than 11 mm, the bottom of sapphire crystal reveals the caliber and its gold oscillating weight, also engraved with the date of Girard -Perregaux foundation. The bracelet is made of black crocodile with a deployante closure. The front of the models in this collection shows the iconic golden bridge, whose opening discovers for the first time a Microvar variable inertia balance, which allows a finer arrangement in the regulation of energy and better accuracy.

The customization of each watch has multiple options through the elements of its sphere, with different colors for the cover, combinations and decorations in guilloche, barleycorn or basket background, as well as different indices styles and multiple finishes.