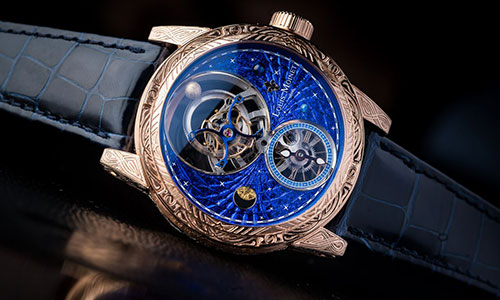 Louis Moinet pays homage to the universe with the new piece called Space Mystery, a watch that will include three fragments of celestial bodies in its interior: a piece of meteorite, one from Mars and one from the Moon.

In addition to the celestial fragments, Space Mystery features the color Magic Blue and a sapphire crystal, which reveals a 13.59mm tourbillon at 12:00 that rotates on its own axis every 60 seconds, becoming the first tourbillon to accomplish this.

However, this isn’t the only special characteristic of the new piece: every time the hands point at 9:00, a small opening allows the appreciation of the meteorite fragment.

It is worth mentioning that Space Mystery will be limited to four editions, each of eight watches.