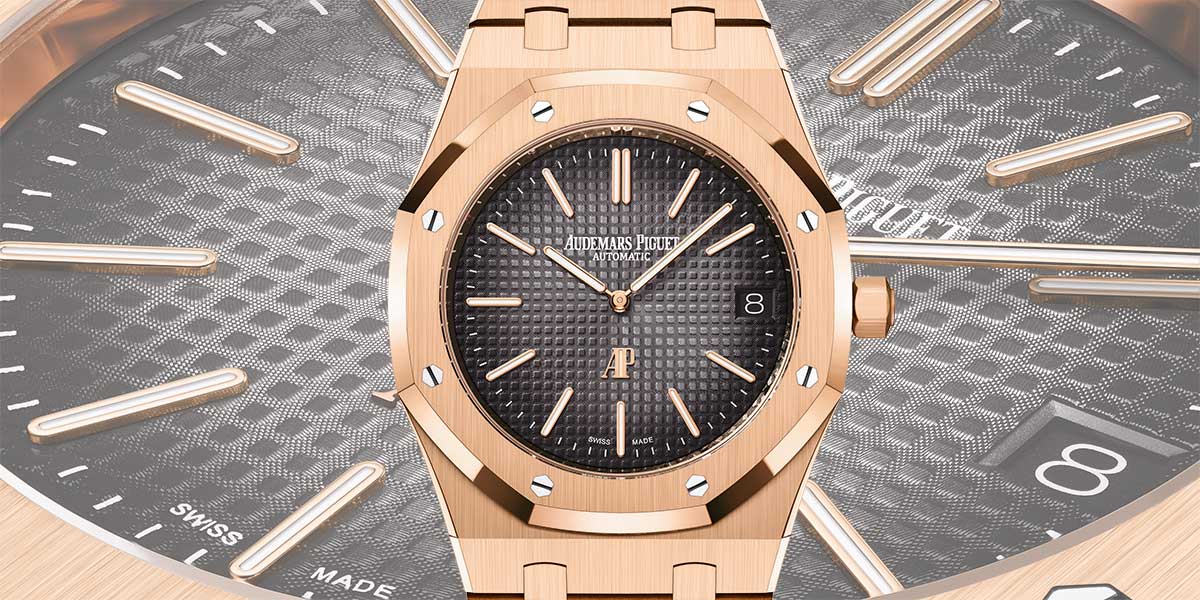 Without renouncing the overall aesthetics of the original 1972 design, this new Jumbo collection debuts the manufacture's latest ultra-thin automatic movement: the caliber 7121.

On the occasion of the watch's 50th anniversary, the Swiss Haute Horlogerie manufacture of Audemars Piguet presents the new generation of the 39 mm Royal Oak Jumbo Extra-thin. This new collection debuts with an elegant proposal that combines 18K rose gold with smoky gray tones.

A bit of history

For the first time since 1972, this model welcomes a new automatic movement, specifically conceived to fit the extra-flat Jumbo case without altering its aesthetics or its thickness.

This extra-flat 3.2 mm movement, developed and produced by Audemars Piguet's watchmaking engineers, takes over from the caliber 212, first introduced in the Royal Oak in the 1970s as the thinnest automatic movement with central rotor and date display of its time.

It took five years of development to bring to life the caliber 7121, equipped with more energy than its predecessor thanks to its new construction. True to the tradition of fine watchmaking, this caliber is finished with refined decorations such as Cotês de Genève, circular snailed satin-brushing, circular graining and polished angles that can be seen through the watch's sapphire crystal caseback. 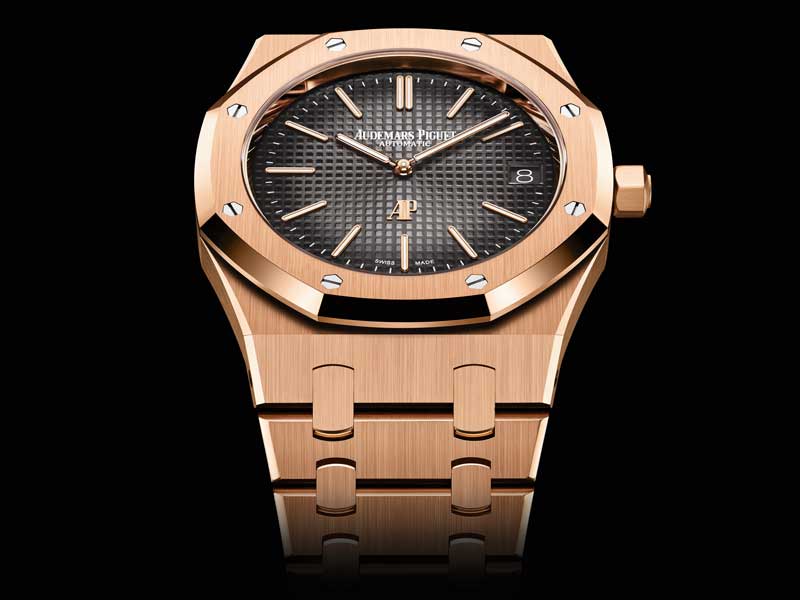 Some facts about the Royal Oak Jumbo Extraplano 50th anniversary:

- It is made up of 22-karat rose gold and with the "50 years" anniversary logo along with Audemars Piguet's signature engraved.

- The Petite Tapisserie decoration of the original Royal Oak was created and produced, for the first time, by the prestigious Geneva dial manufacturer, Stern Fréres.

- Since 2010 and to date, the guilloché dials of the Jumbo models are produced in the new workshop of the Manufacture.

- The rose gold indexes and hands have retained their baignoire shape.

- Rose gold appeared in the Royal Oak collection in the mid-1980s.

When the Royal Oak designed by Gérald Genta for Audemars Piguet hit the market in 1972, it broke the prevailing aesthetic codes, considered a high-end sports watch that was quickly dubbed Jumbo, considered "huge" by the standards of the time.

During the first 20 years of Royal Oak's existence, there was only one ultra-thin self-winding watch, most of them sold before 1982.

Since 1992, on the occasion of the 20th anniversary, a wide variety of models called Jumbo for the materials of the case, bracelet and dial designs have been proposed over the years.

It was in 2000, with the 15202 model that marked a turning point in the history of this range, as it incorporated the sapphire case back introduced in 1992.